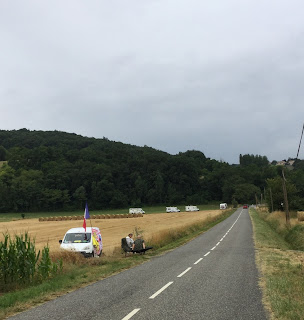 I was enjoying a tranquil, blissful early morning ride with more Tour followers parked along the road than driving it when at eight a.m. cops began taking up their posts at the intersections. My heart instantly sank knowing at any instant any of them could take it upon themselves to order me off the road even though the caravan wasn’t due along here until noon.

I had anticipated a relaxed ride to Saint Gaudens, twenty miles away, where I intended to leave The Tour route and begin the long Monday transfer the peloton would be making to Nîmes from the Pyrenees. But my ride was ruined, as for the next hour-and-a-half the sight of every gendarme gave me a stab to the heart fearful they’d step out onto the road with arms crossed recklessly exerting their authority. Fortunately all resisted the urge I knew smoldered within and I made it to Saint Gaudens. I was very glad I had ridden until 9:30 the night before to get within a reasonable distance of my destination. 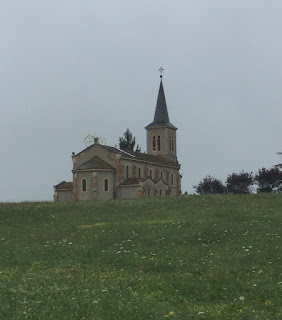 I did have to stop when the morning mist turned into a slight drizzle, not only to put on my rain coat but also to wrap my sleeping bag and sleeping pad in plastic. The mist added an eerie aura to an isolated cathedral on a hill that had been adorned with an over-sized decorated bicycle on its roof, a strong contender for the most audacious decoration of The Tour. There had been a couple other out-of-the-ordinary the evening before in Saint Elix Le Chateau. Ties on hay bale figures in the colors of The Tour was an inspired use of the hay bales. 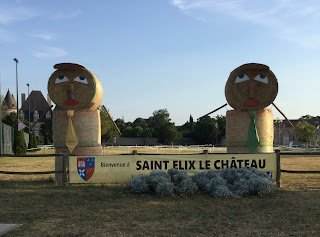 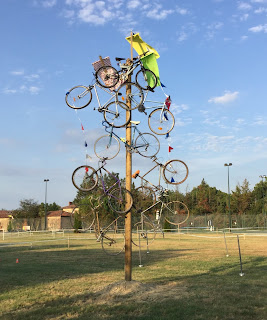 I nearly crossed paths with Ralph again in Saint Gaudens.  He had spent several hours in the hospital there the evening before when he crashed on the Col de Peyresourde and was brought in by ambulance as a precaution to see if he had suffered a concussion.  He was released too late to find a hotel, so ended ended up sleeping on a cot in a bar.  He left town the next morning via train to the stage finish in Bagnères-de-Bigorre.  He has become a master of taking advantage of the excellent network of French trains, making use of it nearly everyday to get where he wants to go.  He has certainly become infected with Tour fever to still be sticking at it.

After taking advantage of the WiFi at the tourist office to download all the podcasts commenting on yesterday’s stage I went to the Orange telephone store to get another SIM card so I could access the internet on my iPad wherever I might be.  I had used up the last one I bought in Belgium a little faster than anticipated and have been without for a couple of days.   Initially I was told I would have to sign up for a year’s plan, but eventually I was sold the same SIM card I had bought in Cannes and then in Belgium that gave me 5 Gs for fifteen euros.

As at the first two, the young man helping me wanted to take a photocopy of my passport. He was as surprised and delighted as many campground proprietors are at the rare occurrence of encountering an American. He’d only met two others in the two years he’d been on the job. He was the lone English-speaker on staff and had dealt with quite a few Dutch and Brits, but Americans, hardly a one. He wondered what had brought me to his out-of-the-way town. 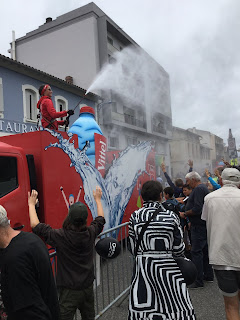 I stuck around for the caravan frenzy and snagged a red wrist band that had eluded me up until now. I figured it would have The Tour logo on it, but it was actually branded with “CGT” and “Solidarté.” Janina will be even more thrilled by it than all the sunscreens I have collected for her car. 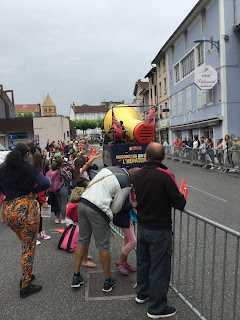 From Saint Gaudens it was on to Foix, forty miles to the east. It will be Sunday’s Ville Arrivée. I will ride the stage from it’s finish to its start in Limoux and then continue another hundred miles to Nîmes, where the peloton will enjoy its second Rest Day on Monday. I should arrive the day before and can begin riding Tuesday’s stage on Monday. There will be no course markers for me the next three days, but there aren’t too many roads to choose from in this rugged terrain on the periphery of the Pyrenees.

For the first time since leaving Yvon I won’t have to ride late or get up early. Early and late makes for most tranquil cycling, but it will be nice not to be forcing the pace, concerned about getting as far down the road as I can before it becomes off-limits.  And I will be able to get a little more than the bare minimum of sleep.

There is no escaping though the push to reach a town big enough to have a bar to watch the end of a stage. I knew there would be bars aplenty in Foix, a frequent Ville Étape I know well.  I chose the wrong one though, as the owner was an extortionist, demanding two euros sixty for my menthe á l’eau. Usually it’s only one-fifty. The day before it was a mere euro.

One of the British Yates twins, the one not vying for the overall, Simon, was allowed to get in the break over the day’s two Category One climbs and outsprinted two others for the victory, proving the fan with the “Yates You Can” sign I pass nearly every day on the road correct. It continues this Tour of non-multiple stage winners. Yesterday’s most telling stat was that it had been 25 years since there had been a different winner on each of the first eleven stages.

None of the prime contenders put up a fight today, saving themselves for the next day’s time trial in Pau. That will shake up the standings and maybe even result in Thomas taking Yellow, unless Alaphilippe can time trial better than he is known for and stay within a minute of Thomas.

Posted by george christensen at 1:26 AM