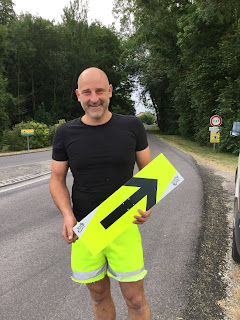 In my sixteen years of following The Tour not once have I come upon the course marker crew in the act of mounting a marker. I haven’t had many chances, as rarely am I riding a full day ahead of the peloton on the course before the markers have been placed, just on occasion on a rest day. When I’ve had that opportunity I’ve been on the alert for a convergence of them for a photo and to let them know how much I appreciate their creativity in finding odd spots to place a market. They have brought me much pleasure. 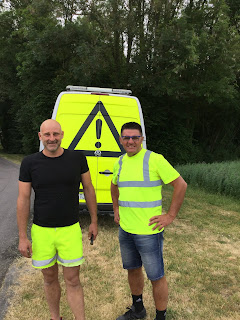 This year’s route gave me two opportunities early on to catch them in action while I rode stages three and four a day ahead of the peloton. Yesterday it didn’t happen, but today I had that much-longed for moment as I come upon the first of the three vans and its two-man crew just as they were finishing a mounting. They were happy to be photographed and curious about me too, wondering how many kilometers I rode a day and where I was from and how many Tours I had done. Not as many as them, as they’d both been at it for twenty years.
When I observed that the marker had a new logo this year they asked if I’d like one. They hardly needed to ask. For the first time I have a marker without the pair of snakebite punctures that the wire is threaded through to hold it in place. I almost asked them to autograph it, as I once did of Christian Vande Velde. This was as great a moment as if Eddie Merckx himself had made the presentation. 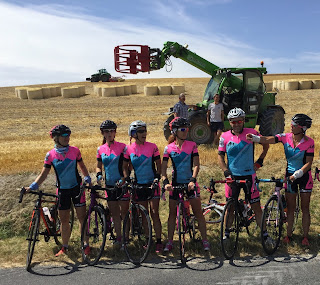 My day was also highlighted by managing to fall into the draft line of one of the women’s groups riding the route. I hung on for half an hour upping my speed from twelve miles per hour to fluctuating between sixteen and twenty. It felt good to be breezing along, but I hoped I wasn’t stressing my legs too much.
There were a couple of guys amongst them, one over-sized at the back who provided an ideal wheel to sit on. They rode two abreast chattering away in French having a jolly good time, even stopping to take a photo with some farmers in the background. We were passed by another much more serious cadre of the female set. 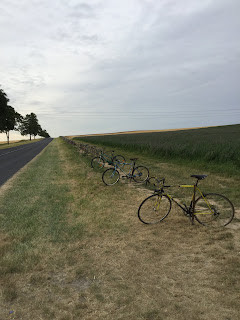 Today’s biggest “Wow” came from a half-mile stretch up and over a hill of several hundred bikes a few feet apart facing the road. A community had made a concerted effort to round up all the stray bikes from miles around and give them a new life along The Tour route. It was a boggling spectacle, almost as spectacular as the terra cotta soldiers of Xian. 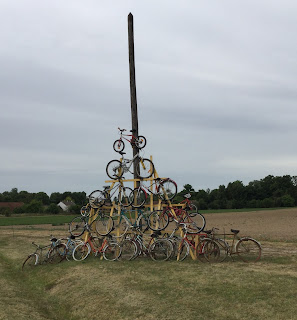 It was a nice variation on the usual impulse to pile them in a pyramid, though the pyramids, just like cairns of rocks, are always a welcome totem of homage giving the spirit a jolt. 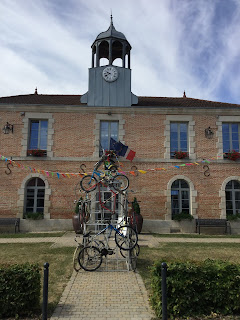 Along with the regular signs of “Vive Le Tour” are expressions of “Merci” to the caravan or The Tour or a rider or a team. 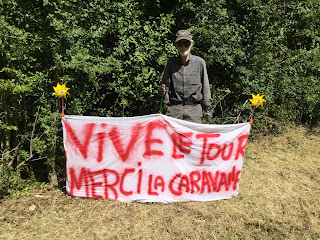 Today one community gave an artfully designed blanket “Merci” to all. 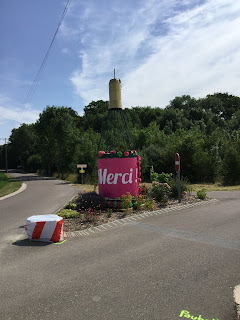 Perhaps the most innovation decoration was one with flowers made from plastic bottles. 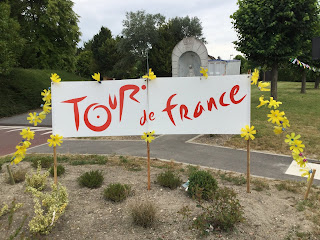 I arrived in the city of Bar-le-Duc, home of the Michaux father and son who put pedals of the bike, at four o’clock, just in time to find a bar for the finish of the stage. I thought there would be one near the monument to the Michaux’s at the town center, which the peloton would pass, but none of the several bars along the Main Street had a television. Nor did the one by the train station.  My search took me to the plaza in front of the Hotel de Ville.  A bar with seating in the plaza finally had what I was looking for, though I had to ask to have it turned on.  It took a couple of minutes to connect and when it did the French favorite Julian Alaphilippe was making an attack on the final of four short categorized climbs in the last twenty miles of the stage ten miles from the finish.
With great anguish chiseled into his face he managed to hold off all the chasers and dashed up the final climb to the finish twenty seconds ahead of everyone else to claim his third career stage win after two last year and the Yellow Jersey for the first time in his career. He crossed the line punching the air harder than its ever been punched before according to the Cycling News.  He was so spent his soigneurs  had to hold him up when he got off his bike, but he still collapsed to the pavement, not even having the strength in his legs to remain upright with assistance.   Moments later as he was being interviewed he choked up when the interviewer asked him how it felt to wear the Yellow Jersey for the first time.

I had a little choking myself as I rode today, as I awoke to the news that Milos Stehlik, founder of Facets and my landlord for fifteen years, had succumbed to lung cancer.  I had been awaiting this outcome, as I knew he had accepted  hospice care a month ago.  When I let him know I was sorry I wasn’t back home to lend him help in any way he needed he said his wife Elizabeth was looking after him very well.  And he thanked me for all I had done for Facets and film.
There wasn’t a more devoted advocate of cinema than Milos with the voluminous archive of films he had gathered for rental and his weekly commentaries on Chicago’s NPR station and serving on the board of governors of Telluride for years, including a stint as its president. This was the first Cannes he had missed in 31 years.  It left a hole not crossing paths with him and sharing a film.  Telluride will be even more empty without his presence and astute observations.  His film knowledge was second to none. Facets has been a large part of my life and led to many friendships, including that of Janina.  May it live on. 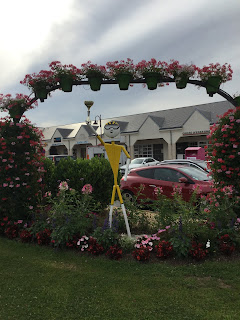 Posted by george christensen at 5:06 AM