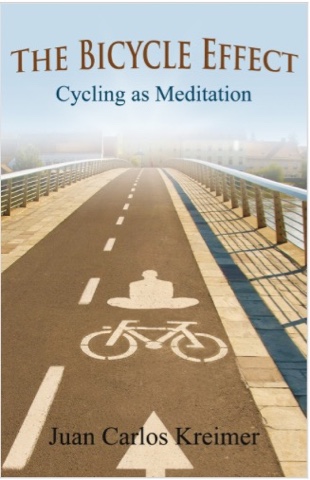 Slight as this smaller than standard-sized190-page book may be, "The Bicycle Effect" would make a fine sight on any cyclist's coffee table with its catchy title and cover shot of a monkish figure in the lotus position marking a bicycle path.  The book's subtitle, "Cycling as Meditation," likewise, would be an inspiring reminder that one ought to be out bicycling rather than sitting around.  It may not carry Biblical weight, but it does make many assertions that will have the faithful crying out "Amen," and might even make a convert or two.
Though the meat of the book offers nothing new to the ever-increasing genre of personal books celebrating one's devotion to the bicycle while elevating it to the status of exalted object, devotees of the bike can all agree that there can't be enough such books.
The original title of the book when it was first published in Argentina in 2013 was "Bici Zen," reflecting the author's twin passions of zen and bicycling.  Thanks to the Findhorn Press of the Scottish clan of counter-culturists that established a commune in 1962 on the North Sea, the book was translated into English and published in 2016 with a title that may better reflect the thrust of the book.  Though there is ample comparison of bicycling to zen, Kreimer's main concern is promoting the many positive effects of riding a bicycle, not only on individuals but for the planet.
The bicycling credentials of the seventy-year old author are nothing exceptional.  They don't extend beyond having been a life-long cyclist who has bicycled in the various cities he has lived in including Buenos Aires, London, Paris, New York, and Rio de Jainero.  Unlike David Byrne's "Bicycle Diaries," which he quotes, he doesn't devote chapters to cities, but rather sprinkles in random anecdotes about his experiences in some of them.
He was in Paris in the 1970s helping start up a magazine devoted to environmental issues. He suggested using a bicycle as its emblem.  The idea was rejected, as his French colleagues associated the bicycle with the austerity of World War II and the years afterwards.  One of the thrusts of his book is that the bicycle has now increasingly been accepted as an intelligent choice of urban transport.  Like Jeff Mapes' "Pedaling Revolution," he sees a great surge in urban cycling.  He doesn't call it a revolution, but rather hope for the future. He perceives the bicycle as transitioning from being mostly embraced by "romantics and fanatics" to a much greater audience.
In keeping with the zen precept of simplicity he seeks meaning in common, every day events such as locking one's bike and gliding through traffic avoiding mirrors.  He acknowledges that there are those who have yet to accept the bicycle as a positive force.  He deals with an editor who seems to resent the freedom the bicycle gives him and the fun he has riding.  He can't fathom why, wondering if perhaps the editor thinks the bicycle unleashes a primal, wild nature that he fears.
Even if one doesn't achieve a zen state while bicycling of detaching one from his earthly bounds, one can at least reach a state of Equanimity.  Any committed cyclist would second his notion that "the bike is an ambulatory prosthesis that gives us new abilities, that allows us to extend what we are capable of."
He doesn't write of touring by bicycle, but he does assert that "many people are discovering that traveling by bike does more than serve their physical needs; it is also a  method of internal alignment."  One shouldn't be concerned about the loneliness of solitary ventures, as "to be alone is not to be lonely, but to be with yourself."  He preaches acceptance, even of the air one breathes. "You can not choose the air you breath," he writes, "but you can work with it until you find a rhythm in the inhalation and exhalation of it."  The book abounds with such perceptions.
He supports his suppositions with quotes from Herman Hesse, Gary Snyder, Henry Miller, Henry David Thoreau, Aristotle, Robert Pirsig, Allen Ginsberg, Thomas Merton, Alan Watts (who he can't decide whether has one or two "l's" in his first name), Ram Dass, Lao Tzu and quite a few others.  They weren't all cyclists, but one would like to think they'd all want to be if they had the opportunity to read this book.
Posted by george christensen at 12:18 PM 2 comments: