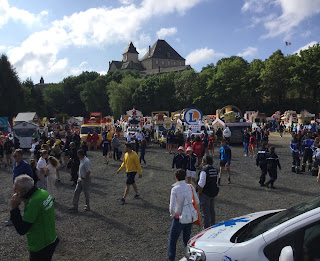 The main climb up to Saint Flour was blocked off as it was the route the peloton would be taking in a few hours so I took the back way up on a steep, narrow street. It took me past the staging area where the caravan was amassed for its 10:15 departure. Many of the youthful set who would spend the next six hours strapped atop some mini-float pelting those along the roadside with product were dancing about and doing calisthenics preparing for their long day ahead. 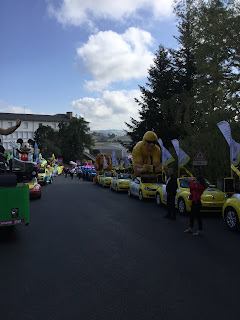 There is a specific order to the better than one hundred vehicles. Those that would lead the way were lined up apart from the many others congregated in a vast field. This gathering was some distance from the city center where the main hub of activity for the fans was, so it was nearly entirely comprised of insiders, those who were the secondary, but prominent performers, in the circus that is The Tour de France. 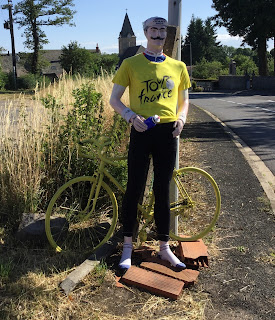 I was happy to see an Intermarche supermarket a block away as I hadn’t come upon an open supermarket the day before on Bastille Day. I had to dig into my last ramen from home for dinner enhanced with ketchup from the caravan to go along with the last of my couscous’s and some apple sauce, calories enough, but not by much. With this a spillover holiday, being Monday, the Intermarche was only open half the day, and rather than morning hours as on Sundays from 9:30 to 12:30, it didn’t wish to conflict with everyone flocking to The Tour, so wasn’t going to open until 12:30. I would be well down the road by then, so had to find another supermarket to restock my couscous and get a can of cassoulet and a 850-millimeter bottle of yogurt drink, that is my go-to energy source. 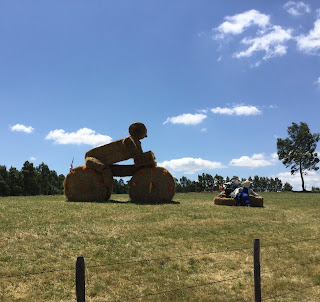 If I wished to ride the course from the start I’d have to wait until nearly one, after the peloton had departed, so I headed out of town on a road that somewhat paralleled the route that allowed me to meet up with the official route around 1:15 at its twenty-mile point. The terrain continued to be laced with big, steep hills, so I wasn’t sure if I’d reconnect with the route before or after the peloton arrived. It’d be nice to catch another glimpse of them, but it’d also be nice not to have to wait for the gendarmes to grant permission to start riding after they’d passed. 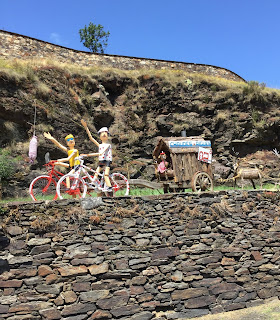 Signs said the road was blocked ahead for The Tour. There was virtually no traffic. When traffic started heading towards me when I closed to within two miles of the course, I knew the peloton had passed and fans were leaving. Cars were backed up awaiting the opening of the road. It’d be awhile, as the peloton needed to get well up the road so no one would catch it from behind. Enough time had passed for the gendarmes to at least allow bicycles on the road. I paused at a large screen set up in front of the town hall broadcasting the action. A four-man break had formed, but it was so early they didn’t have much of an advantage.
. 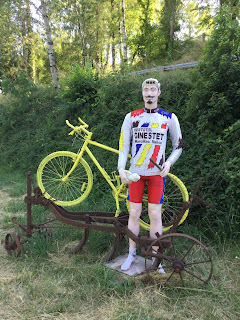 I was too late to find any course markers through the town or even down the road. This was my first chance, other than yesterday for just a couple of miles, of following behind the peloton, to find a discarded water bottle. All I found though for the next fifty miles were a couple of packets of ketchup. Otherwise there was no indication whatsoever that an entourage of hundreds of Tour vehicles and 171 racers had just been this way. Shortly before, the road had been lined for hours with thousands of fans, yet there wasn’t a speck of litter left in their wake, another of the great marvels of The Tour de France. 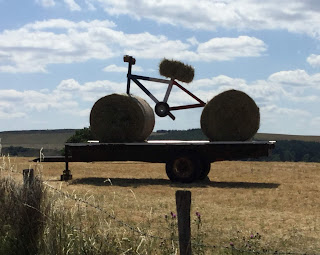 I came to a town with a bar at 4:30, and as with Stage Eight I just missed the climactic moment in the stage, this time with just under twenty miles to the finish when the wind splintered the peloton and a handful of contenders, including Pinot, Uran, Porte and Fuglsang, fell off and were in a chase group. The racing was at full-tilt with Ineos at the front pushing the pace. For the first time this year Ineos asserted its authority, answering all the critics who were wondering if they were as strong as they were in the past.

Pinot and company were narrowing the gap. It got down to 14 seconds, but the legs in front were more numerous and stronger and began pulling away. It got up to a minute and then when the sprinters in the lead group of thirty got within a couple of kilometers of the finish they accelerated like a pack of mad dogs closing in on a kill and the Pinot group ending up losing a minute and forty seconds, a full-fledged disaster. He falls to eleventh.

And there was a new sprint champion for the day, the young Belgian cyclecross sensation Wout Van Aert riding his first Tour. It was the fourth win for Jumbo Visma, who have had three different sprinters take victory along with the team time trial.

I cycled until after nine once again, getting to within fifty miles of the stage finish in Albi. I would arrive early in the afternoon with no sense of real urgency, as this was a Rest Day for the peloton. But as soon as I arrive I will search out the course markers and start riding the next stage to Toulouse, hopefully getting far enough down the route so I can arrive in Toulouse to watch the end of the stage on the Giant Screen.

Posted by george christensen at 5:44 AM