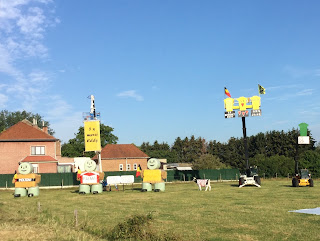 The theme of honoring Eddy Merckx wasn’t simply confined to Brussels, but was evident all along today’s route which made a 122-mile loop south of the city.  There were grand productions with props. 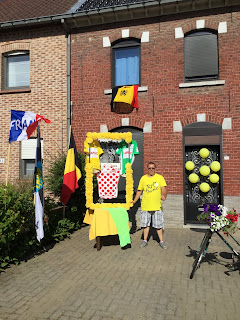 There were minor home-made tributes, whose makers were proud to have their picture taken with.  Some acknowledged other Belgian greats along with Merckx, such as Lucien Van Impe, the last Belgian winner of The Tour over thirty years ago and the recently retired Tom Boonen, a winner of the Green Jersey. 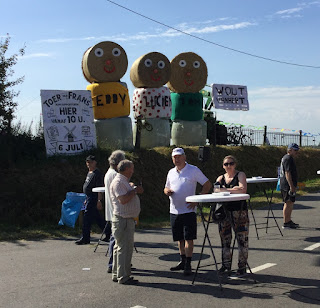 The Belgium gendarmes let me ride until thirty minutes before the caravan was to pass.
I hadn’t quite reached the town of Charleroi, where I planned to peel off the route and head over to Binche, the Ville Départ for Stage Three, but I was close enough. I sat and finished off my breakfast of muesli and waffles  before starting in on my sandwiches as I awaited the caravan and what goodies it would have to offer

They were more meager than ever, not even any madeleines to supplement my caloric-intake. It has been in serious decline since it stopped giving out “L’Euipe” five or six years ago. Last year there was no official daily Tour newspaper that had always been packed with human interest stories on The Tour and the region it was passing through. I did gather a couple of cycling hats and refrigerator magnets and perhaps the chintziest item ever, a tiny packet of ketchup. I could at least use that on my final Belgium cheeseburger I was saving for lunch. There’d be no more bargain supermarket cheeseburgers after I crossed into France later in the day.  Janina will be happy to learn that I nabbed another of those purple fold-up screens for her car to keep the sun out.  We lost one last year in Utah when it flew out the window.

Often when The Tour starts outside of France there isn’t a full complement of caravan vehicles. Usually it takes over half an hour for the caravan to pass. Today it took fifteen minutes, so there is hope for madeleines and more in France.

I and many others headed off immediately after the caravan passed, not wishing to wait some 90 minutes for the peloton to fly by. Binche was just fifteen miles away where I could watch the finish in a bar. Before seeking out a bar I stopped in at the tourist office to see if it had anything more to offer on The Tour than it did three weeks ago. It actually had better souvenirs than the caravan—a Yellow Tour pen, a button and an Eddy postcard.

I had a choice of several bars clustered in the city center. The first one I peeked in had The Tour on and several crusty guys in rapt attention. The breakaway had long ago been caught and the teams of the sprinters were at the head of the pack riding with grim faces. I had ridden the last several kilometers of the stage a couple of times on the way to the campground I had stayed at, so it was very familiar, especially the grand cathedral a kilometer from the finish that provided a picturesque backdrop.

In the furious sprint to the finish Mike Teunissen of Holland nipped Peter Sagan in a photo finish that took several slo-mo replays to determine.  Teunissen will be in Yellow tomorrow, the first Dutch rider with that honor in thirty years. He was a surprise winner, as his role was to be the final lead-out man for Dylan Groenewegen, one of the day’s favorites, but he crashed a kilometer from the finish. 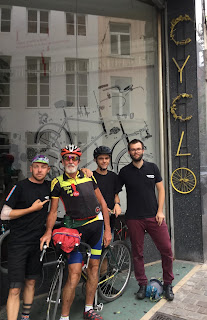 I can sometimes spot Skippy at the finish, but not this time.  I had tracked him down the day before.  After a day of random riding around Brussels, previewing the time trial course and hanging out where the stage starts and finishes were being assembled and not crossing paths with him I dropped by a downtown bike shop where he had connections and within a couple of minutes he appeared after a day of making the rounds himself. He had spent some of it at The Tour headquarters, known as The Presence, and had a gallery of photos of many of the luminaries in attendance including Poulidor and Merck’s son Axel, in from the States, where he directs a successful team.

The bike shop was a classic, simply titled Cyclo, which it spelled out in bike parts. One of the mechanics had photos to share himself. He had encountered the CCC team out on a ride and was thrilled to have a photo with the Belgian Olympic champion Greg Van Avermaet.

I thought Skippy might be celebrating his 25th Tour, but that doesn’t come for three more years, though he’s not sure if he’s going to make it as he said it gets harder and harder every year now that he’s into his 70s. “Sometimes I ask myself why I’m still doing this,” he said, though I know there is no stopping him. He’s already ridden the Giro and the Dauphiné and theTour de Suisse this year and will do the Vuelta as well after The Tour before returning to Australia, so there seems to be no stopping this fanatic. 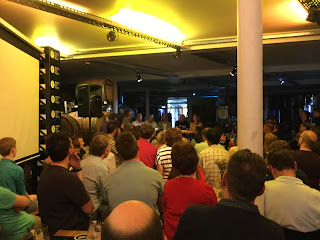 Having finally caught up with Skippy I would have headed out of town and found a place to camp on the Stage One route but I had one more cycling event to attend—the annual talk by the Telegraph Cycling Podcast crew. Last year it was on the Rest Day in Annency. This year it was pre-Tour at a brew pub—the Brussels Beer Project. It was packed, standing room only, when I arrived at 7:30, just as it started. Richard, Lionel and François were seated at a table and during the next ninety minutes they were joined by fellow contributors Orla and Chiro and Jonathan Vaughters, director of Education First.

I was delighted to see Vaughters as I wanted to ask him about Dr. Lim returning to his team as an advisor. He’d had a very acrimonious breakup with Vaughters in 2010 when he left his Garmin team to work for Armstrong and the Radio Shack team. Vaughters said he isn’t officially working for the team, just some of its riders. He said he respects Lim very much, but there are times he’d like to strangle him. One of the riders he’s working with, even attending team training camps with him, is Tejay Van Garderen, who is riding better than he has in years. Vaughters didn’t want to give Lim any credit. He was taking it all for himself, saying he’d provided a more relaxed environment for him at Education First, after years at the more demanding BMC team, and that he also told Van Garderen he didn’t need to race at as light a weight as BMC wanted, which was giving him more power and endurance.

With Van Garderen going as strong as he has there might be some concern that he would want to be team leader rather than Uran, but Vaughters said that isn’t an issue at all. He and Uran have become great friends. Vaughters spent two weeks in Colombia training with Uran and was emailing Vaughters every day saying what a cool guy Uran was. Richard interrupted to ask if that meant they were rooming together during The Tour. Vaughters isn’t so hands on to know the answer to that.

After the program was over I hung around to ask Richard about an interview he’d recently had with two of the British women who are part of a women’s group riding The Tour route a day-ahead as a group of women did last year. He’d said there were only ten of them. I met up with such a group last year and there were 25 or 30. It turns out there is more than one group of women doing it this year.

I couldn’t linger too long as I had at least an hour of riding ahead of me to get out of the sprawl of Brussels to find a place to camp along The Route route. It was the first of my many rides in the days to come to near dark, always a great pleasure.

Posted by george christensen at 6:58 AM