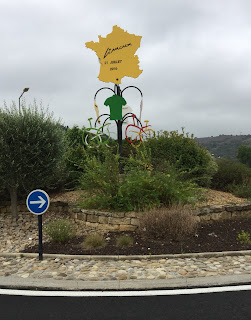 The course marker crew had passed my campsite along the road before I started cycling at 7:45, so I didn’t get to see them in action marking Sunday’s stage starting in Limoux. I had no need of the markers as they faced the wrong way, plus it was a straight shot into Limoux on D118 anyway, but it would have been nice to let my pals know I was still at it, and to impress them with the stack of markers of my own atop my tent and sleeping bag.

I did get to see two of the Day Ahead groups on my run-in to the city.  The five Dutch guys had heads directly forward grimly riveted to the wheel in front of them and didn’t seem to notice me.  The mass of thirty or forty women strung out in pairs were riding at a more relaxed pace looking as if they were actually enjoying their ride.   A few interrupted their happy chatter with a “bonjour” as we psssed a few feet apart.  They had all summitted the Tourmalet the day before and then had to drive over a hundred miles to Limoux.  I would have loved to have heard how they were holding up.  They were no doubt looking
forward to their day off the next day in Nimes. 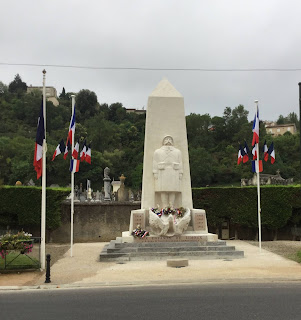 Limoux was twenty-four hours from being the center of the cycling universe, but all was calm with no indication whatsoever of the whirlwind that would soon converge upon it. It would be nice to stick around to witness the transformation, but even more enjoyable is riding my bike through the glorious French countryside. Today’s cycling took me through Carcassone and then through miles and miles of pristine vineyards.  I had to keep reminding myself that this was the day of the Tourmalet with the possibility of all sorts of fireworks and focus my attention on that and not just the serenity all about me.

Once again The Tour delivered an absolutely exhilarating day of racing, especially for the French, with an amazing one-two as Pinot blasted away from a group whittled down to a mere six in the final 500 meters to win the stage by six seconds with Alaphilippe remarkably taking second.  There is no doubting now that Alaphilippe is for real.  He extended his lead over Thomas for the second straight day, as the defending champ straggled in 36 seconds after Pinot, this time behind his teammate Bernal who finished fourth six seconds back, reviving the question of who is the best bet for Ineos to be putting all its weight behind.

Pinot said he rode with anger today and that his team will continue to fight.  “The Tour isn’t finished yet,” he asserted.  Bernard Hinault has to be jumping up and down with delight, as he had decried for years that such an attitude has been gravely absent in French riders.  It is a spirit that Bardet, the other French hope the past few years, notably lacks.  He lost another twenty minutes today, putting a huge exclamation point on the disaster of his Tour.  He’s now in contention for the Cycling Tips podcast competition for the rider who finishes The Tour closest to one hour down.  It’s a joke of course, and not something a rider would be striving for.

One of the big stories the past two days is speculation over why the Australian time-trial World Champion Rohan Dennis abandoned The Tour two days ago at the Feed Zone the day before the lone time trial of The Tour that he was favored to win.  He’s not talking and his team just says it is investigating the matter.  It could well be because Ruppert Guinness, a fellow Aussie who co-founded the one-hour back competition, told Dennis that he was right around the mark.  Dennis told Guinness he wished he’d known about the competition.  Guinness said he himself didn’t even know about it until a couple days before when he dreamed it up.  To be so far behind already when he had aspirations of one day transforming himself into a Grand Tour contender, just as Alaphilippe has done, may have shamed him to quitting.

Bardet was by far the day’s biggest loser, but there were plenty of others as well, not the least of whom was Quintana, who finished 3:24 back.  Colombians finished fifth and seventh on the day and are fourth and seventh overall, but he isn’t one of them.  They are Bernal and Uran.  But even worse than Quintana were Martin and the Yates twin going for the overall, who lost nearly twice as much time as Quintana, eliminating them too from podium and possibly even top ten consideration.  There are certainly story lines all over the place, but the greatest are French-centric with Alaphilippe fully taking hold of The Race extending his lead to over two minutes ahead of the faltering Thomas and Pinot riding with extreme aggression.  One can hardly wait to see them in action next on tomorrow’s mountain top finish.  Racing fans couldn’t ask for more than what this year’s Tour has been delivering.  It will be a thrill to be back in the maelstrom when I arrive in Nimes tomorrow.

Posted by george christensen at 10:26 AM

If you see Craig in the area, please give him my best. Hopefully he'll take a break from his garden for a nice ride.