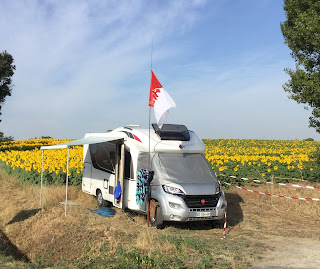 As I closed in on Toulouse and the stage finish I was really looking forward to a semi-cold bottle or two of Vittel water that crews for the sponsor hands out near the finish area to keep the fans around. It was just after 12:30 and I had been riding hard for five hours to reach the finish before the road was closed. The warm water in my water bottle was hardly appeasing my thirst.

I made it once again to the three-kilometer arch before being ordered off the course. At least here it was possible to keep riding on sidewalks and then the other half of the closed-off wide boulevard under a canopy of shade provided by majestic plane trees. I kept waiting to see sponsors on the course handing out product but it was too early for fans to be lining up so far down the course. 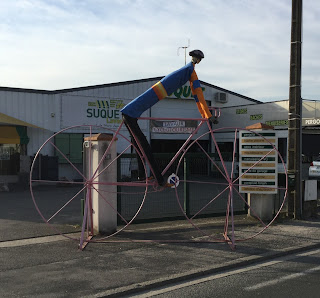 At the 500-meter mark I came to a bottleneck of fans as the way was blocked by a fence. To go further one had to pass through a phalanx of security guards checking bags. No bikes were allowed any further. There was nowhere to safely leave my bike with all its gear, so no refreshingly cold water for me on this hot day. At least a nearby park had a water spigot of semi-cool water.

I hadn’t been planning on sticking around to watch the stage on the Giant Screen, so the clamped-down security here, unlike at any other stage finish I’d been at this year, didn’t cause me any great consternation other than not being able to mingle with the early arriving fans and see how the grand finish line structures blended in with all the surrounding old buildings on this central boulevard. If I had spotted the water-distributors, I would have certainly left my bike for a few moments, and made a rush for the water, as if it were an oasis in a desert. 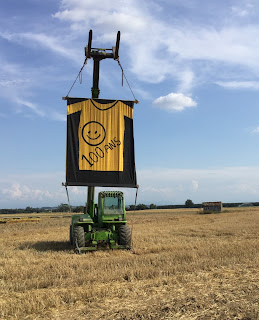 My next objective was to cross the Garonne River, that bisects the city, and start in on the next day’s stage. The Tour responded to critics who accused it of always staging its starts and finishes in some glamour section of a city, so for the first time it would be starting a stage in the working class section of a city.

The several mile neutralized zone wound its way around very unpicturesque neighborhoods. I needed to re-up my SIM card at an Orange store, my French provider. There were several around Toulouse including one in this vicinity. Unfortunately it did not provide SIM cards. I would have to go back into the city to another store, something I did not care to do. I would go without Internet another day and hope there was an Orange store in Saint Gaudens on the next day’s route. 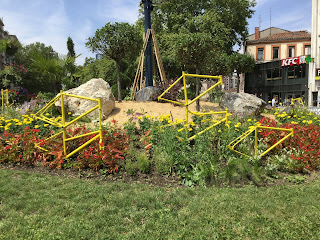 The legs were most grateful to be riding on relatively flat terrain once again after several days of non-stop climbing on the Massif Central. The last three stages each had had over 10,000 feet of climbing, as much as a stage in the Alps or Pyrenees. Christian Vande Velde had called this year’s route the toughest in his memory with all the early extra climbing in the Vosges and on the Massif Central. It took me nearly two days to complete the stage from Saint Flour to Albi along with the couple thousand extra feet of climbing on the transfer from Brioude to Saint Flour.

It was three days straight of nine hours of saddle time and averaging less than ten miles per hour for the day. The legs were tiring, but never sore in the morning. That came earlier in my training for this. Sore legs brings to mind Mikel Landa of Movistar. When he rode for Sky he said he experienced sore legs for the first time in his career after training sessions, an indication of how Sky, now Ineos, prepares it riders and why they are the dominant team. 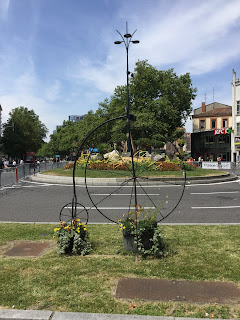 The Cycling Tips podcast with long-time Australian journalist Rupert Guinness, author of several books and known for his collection of Hawaiian shirts and sense of humor, and Caley Fretz, formerly of the Velo News, noted that there are more than twice as many riders as usual already over an hour down, more than half of the remaining 169 of the original 176 starters. They are starting a second competition to see who can be the closest to an hour down when The Race is over.

Last year’s winner would have been Greg Van Avermaet, who finished 28th overall. George Hincapie had coincidentally just mentioned him on the podcast he does with Armstrong. He said back when he was a teammate with Van Avermaet at BMC, when Van Avermaet joined the team he showed him a picture of himself as a 14-year old with Hincapie, which Hincapie had no memory of, but made him proud that he had been a hero to his young teammate who went on to win an Olympic gold, but also old.

It is podcast heaven for cycling fans during The Tour.  I listen to six of them as I’m pedaling along giving a daily recap on each stage.  Along with Cycling Tips, there is The Move, Armstrong’s podcast with George Hincapie (remarkably the most downloaded of all sports podcasts during The Tour), Johan Bruyneel’s sister podcast to Lance’s,  BBC’s Bespoke, the Telegraph Cycling Podcast and Bobby Julich’s Put Your Socks On.  And supplementing them is the always informative weekly Warren brothers podcast.  Unfortunately there is no Breakfast with Bos this year as Ian Boswell did not make his team’s roster.

I arrived in Albi on the Rest Day shortly before four, nearly a full day after the peloton. It was a relief to catch up after falling so far behind, and even better to get back out ahead, immediately starting on the next day’s stage to Toulouse. Immediately after the neutralized zone was the first field of sunflowers of this year’s Tour with many more to follow. I left the route after a few miles to lop off a forty mile loop and rejoined it fifty miles from the finish, allowing me to easily arrive in Toulouse before the peloton.

As the afternoon wore on as I continued down the Stage Twelve route I began to eagerly look forward to my bar for the day to watch the end of Stage Eleven almost as much as for a cold menthe á l’eau as for the race action. Beginning at four I passed through three small villages that had prominent cathedrals, but not a bar. At last after five I found a bar, but feared the stage might be completed and I wouldn’t have reason for a drink. I had to ask for the television to be turned on. I cheered seeing there was 18 kilometers left in the stage and could sit and savor that cold mint flavored drink for the next half hour as I watched the peloton charge to the finish without having to gobble up anyone in a breakaway.

At last the pint-sized Australian Caleb Ewan finally won a stage, the first of his career. He’s been close and Guinness and others keep predicting that he will win the next sprint stage. He just barely nipped Groenewegen. With no one dominating the sprints, a different winner each day, no one is piling up the 50 points that goes to each day’s winner with second place getting 30 and down to two for the 15th finisher, allowing Sagan, who is always in the top four, to keep a comfortable lead in the competition.

Posted by george christensen at 1:26 AM

I'm surprised that you didn't mention the Rapha podcast. My favorite at the moment. Enjoying your coverage in any case.

Chris: Is Rapha the Rouleur podcast? I listen to that but it’s only every couple weeks. If there’s another, I’d certainly add that to my listening.

The Cycling Podcast with Richard Moore and Lionel Birnie. Rapha sponsored I should say.

Yes, they are among those I listen to. They are the the best informed and most comprehensive. I attended a presentation they gave in Brussels before The Tour started as I did last year in Annency on the first Rest Day and had a chance to have a few words with them including asking Moore about writing “Slaying the Badger,” perhaps the best book on cycling out there.