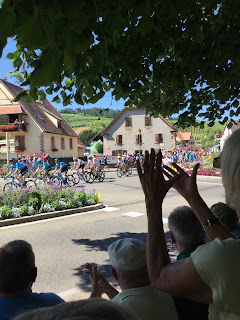 Yvon and I positioned ourselves under the oldest tree in Alsace, a 700-year old lime tree in the picturesque town of Bergheim, when the peloton flew past us on its way to Colmar 45 miles from the finish.  We were sandwiched between a tent of the elderly from a nearby nursing home, many sitting in wheelchairs, and a rambunctious bunch of ten-year old boys who had been a terror recklessly flying after everything the caravan tossed.  And directly in front of us was an older woman who clapped vociferously and shouted out a staccato “Bravo” during the entire passage as if she’d just witnessed a stunning performance by Nureyev.  It was another ultimate Tour experience in the thick of all these devotees who’d had a pleasant afternoon of conviviality waiting over two hours for this moment, just as we had. 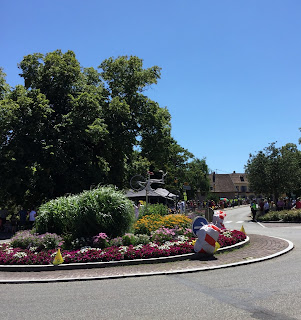 During our wait under the shade of the historic tree, Yvon and I perused the many pages of Tour coverage in the local newspaper.  It included a full-page story on the 88-year old Roger Hassenforder, a local who had been a Tour star in the ‘50s and ran a restaurant named for him that was on today’s route.  He won eight stages during his career and spent four days in Yellow in his first Tour in 1953.  He was a prankster and was known as “the joker in the pack.”  He became a friend of Johnny Hallyday and would go hunting with him.  The article mentioned Hallyday by first name only, reflecting what a national icon he is, unlike any other.  Hassenforder was on today’s podium to present Alaphilippe with another Yellow Jersey, holding on to it for at least one more day before the much-anticipated sixth stage to La Planche des Belle Filles.

Shortly after the passing of the caravan began Yvon and I escaped from the shade to a less densely packed area out of concern for our safety from the rambunctious boys, who were like sharks attacking raw, bloodied meat.  There were a few more sponsors than in Belgium, but their numbers were still truncated, taking a mere twenty minutes to pass, half of what it has been in the past, and still no madeleines.  I at least nabbed a 100-calorie cookie from the new King of the Mountain sponsor, the supermarket chain E. Leclerc, replacing Carrefour, which had sponsored it the past five or six years, succeeding the supermarket Champion when I first came to The Tour.

I also came up with another sunscreen for Janina and then scored big when Yvon and I drove to the finish, where there were sponsors galore passing out goodies and got a couple more.  Her car will be well decorated with these purple ovals.  We also picked up a polka dot jersey and cap from an E. Leclerc van parked just beyond the finish without too many people around.  Quite a few people had donned the jersey and hat along the finishing stretch. 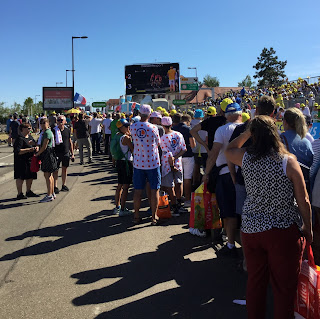 We parked a couple miles from the finish and biked into the throngs and found a spot at the 150-meter to go marker with a vantage of the Giant Screen, arriving 45 minutes before the peloton charged past us with Sagan a convincing winner by a full bike length, silencing his doubters.  Yesterday’s winner, Viviani, who is second to Sagan in the Green Jersey competition and had beaten Sagan in the intermediate sprint, was nowhere to be seen, evidently spent by the preceding pair of Category Two climbs.

It was a genuine relief and pleasure not to be in any rush after the stage, as I would have been had I been on my bike with the need to be getting down the road.  I could be patient as we inched along pushing our bikes through the thick mob that had gathered in front of the podium.  Nor did it matter that the bottleneck continued past the 22 teams buses, each with a throng of fans.

At the end of the road where all the buses were parked was a roundabout with a replica of the Statue of Liberty, as its designer was from Colmar.  The roundabout had been appropriated by a cluster of Yellow Vesters, demanding liberty themselves from the corporatization of France. 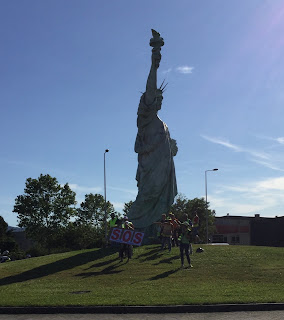 Earlier in the day we stopped by a replica of the Eiffel Tower, the other of the world’s most recognized objects, that the peloton will pass on the next day’s stage just a mile from where I’m staying with Yvon and Pierrette.  We could stroll a block over from their home to watch the Stage, but we will head into the Vosges and take in it on one of the day’s four Category One climbs on this monster of a stage. 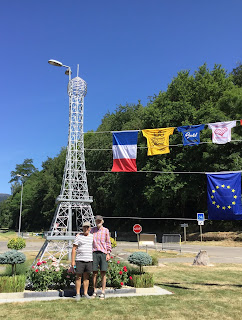 This will be the first test of who is to be taken seriously.  Many questions will be answered—if Bernal is stronger than his teammate Thomas, if Pinot is the Frenchman to watch rather than Bardet, if Alaphilippe has graduated to genuine contender and can keep the Yellow Jersey, if Valverde’s shedding of three kilos has made him a force to be reckoned with, if Fuglsang can continue his strong season, if Yates and Uran and Van Garderen and Aru have it, if Nibali can win it again and if there are any surprise candidates.  After watching them battle it out on one of the early climbs, Yvon and I will race down the mountain on our bikes to his van and rush back home to watch the great climax on La Planche de Belles Filles, a five-mile climb with grades up to twenty per cent.

This is the fourth time it has been included in The Tour, the first in 2012, the Wiggins year.  Froome won the stage, but Wiggins maintained his hold on Yellow.  In each of the three times it has been on The Tour route, whoever has been in Yellow after the stage, has gone on to win The Tour, Froome and Nibali the other times.  It will be fascinating to see if this holds true this year.  It promises to be Another Great Day at The Tour after my first experience of watching the peloton pass twice in the same day.
Posted by george christensen at 12:40 PM