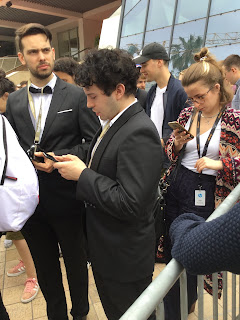 Despite great enthusiasm from the press, Tarantino and his film “Once Upon a Time in Hollywood” were totally overlooked by this jury.  Nine of the twenty-one films in Competition received an award, two more than usual, as the Jury Prize was shared by two films and another film was given a special mention, making it a further affront to Tarantino.  His feelings couldn’t have been hurt too bad though, as he attended the awards ceremony despite knowing he wasn’t among the winners.

Not having seen it, the only one of the Competition films I had missed, I had no vested interest in it winning, other than if it did win it would make it all that more of a film to look forward to seeing.  I was pleased though that the jury sided with the black comedy “Parasite” by the South Korean Joon-Ho Bong.  It was just one of two films in Competition that gave me a “Wow” moment, that this was something striking and bold, going behind the ordinary.  The other was “Les Miserables.” It also could be said of the sexual excess of Kechiche’s film, though more out of amazement than appreciation.

Two of the favorites for the Palm d’Or, Almodóvar’s “Pain and Glory” and Sciamma’s “Portrait of a Lady on Fire,” were fine films, but more bland than exceptional.   Both received awards, Sciamma for best screenplay and Antonio Banderas for best actor.  Best actress somehat surprisingly went to Emily Beecham from “Little Joe.”  The Dardenne brothers were unexpectedly given the best director award.  The Grand Prix for the second best film went to “Atlantics” by Mati Diop, the first black woman to have a film in Competition.  The other black director in Competition, Ladj Ly, and also a first-time director like Diop, shared the Jury Prize for his “Les Miserables” with the Brazilians Kleber Mendonça Filho and Juliano  Dornelles for “Bacurau.”

Former Palm d’Or winner Michael Moore was flown in to present it.  I can’t report on his smirky remarks as they were drowned out by the French translation on the telecast I was watching on a television screen standing with several dozen others outside the press room in the Palais complex, being denied access to the Debussy where it was being shown on its large screen.  Some years they let Market Pass holders in to watch it with the press and some years they don’t.  It was a great disappointment to be denied that privilege.

Sylvester Stallone was also among the seven presenters, given Grand Prix honors, one notch above Moore.  Catherine Deneuve had the queen’s role of being the Palm d’Or presenter.  Jury President Alejandro González Innarritu, whose English was also superceded by the French translation, gave an opening speech and then another before announcing the Palm d’Or.  I do know he said it was a unanimous decision.  The last time that happened was with “The Class.”

The first award given out was a special one the jury made up to acknowledge the Palestinian director Elia Suleiman’s film “It Must Be Heaven.”  The FIPRESCI jury of film critics had earlier given it their Palm d’Or.  It was one of three films I caught up with today, actually the final film of the festival screened at ten p.m. after the Awards ceremony.  Suleiman wanders about Paris and Manhattan after leaving Palestine as a Jacques Tati character seeking a new homeland amused by curious sights—cops on roller blades, a huge pile of bottles besides an overflowing recycling depot, a street cleaner nudging cans with a broom through a drainage slot as if he’s playing golf, and such.  Towards the end in New York he encounters Gael Garcia Bernal, who had also been one of tonight’s presenters, who explains to someone that Suleiman “makes funny films.”  If I had seen this before the Awards Ceremony I never would have anticipated it receiving an award.  But I thought the same of “Bacurau” and “Little Joe” and also the Dardennes.  I would have been less surprised if Kechiche’s audacity had been awarded, even though it received the worst reviews.

I knew there was little chance of the French film “Sibyl” receiving an award, though its star Virginie Efira could have been considered for best actress for her performance as a shrink who is divesting herself of her clients so she can write a novel.  Her clients are all upset.  She remains faithful to one, an actress two-months pregnant who is about to go off to shoot a movie on a remote island with the father of her child who wants her to keep it, though she doesn’t.  The shrink is summoned to the island to help her through it and to get the movie made.  The script was inventive enough to warrant consideration for an award too if it had had more gravity.

I got an early, early start to the day, getting in line at seven a.m., an hour-and-a-half before the screening of Almodovar’s film, and there were a hundred people ahead of me.  All day the lines were massive for the final screening of 20 of the 21 Competition films.  I had seen the film earlier, but with French subtitles.  I gained much more from the film with the English subtitles.  I didn’t even realize the drug the film director was taking was heroin, as the French word is “cheval,” not a word in my vocabulary.  The added understanding certainly gave me a better appreciation of the film, but didn’t elevate it to Palm d’Or status. Giving Banderas the best actor was fully justified.

I would have liked to have seen “Les Miserables” again but it was playing at the same time.  For one of the few times I’ve attended the festival, there weren’t really any other films I cared to see again, so I could return to our apartment and begin packing before I needed to get in line for “Sibyl” five hours later.  Getting an early start on packing meant I could get off early the next day for Nice to see a special exhibit on the 100th anniversary of the Yellow Jersey at the National Sports Museum.  Then it will be into the Alps to preview this year’s Tour climbs.  I am as eager as ever to be back on the bike and end my two weeks of sleep and food deprivation.  As always I have much cinema to digest.
Posted by george christensen at 1:13 AM

Hey now, George! Here's hoping you've been the beneficiary of good weather and fine riding now that the festival is over.

A quick note about the word, "cheval" being used to refer to heroin: Perhaps it would have been more apparent if they'd simply used the English slang, "horse" for it instead of translating it into French. So, they're using an English/American slang term for the drug, but translating it directly into the French.