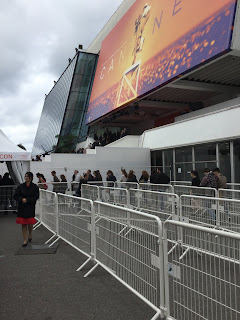 Just as Adam Driver parroted “this isn’t going to end well”  throughout Jim Jarmusch’s Opening Night film “The Dead Don’t Die,” that could be a refrain from the very start of Ken Loach’s “Sorry We Missed You.” From the opening scene it is clearly evident there is nothing but heartache and tragedy ahead for the struggling working-class family that is the subject of 83-year old Loach’s follow-up to his 2016 Palm d’Or winning “I, Daniel Blake.”  It is just a matter of how bad is it going to be for them.  I wasn’t entirely sure if I this was how I wanted to start my day at 8:30 in the morning feeling tension and despair for an hour and forty-two minutes sitting up in the nose-bleed section of the Palais operating on less than six hours of sleep, but so it was.


The film opens as a 40-year old guy applies for a job as an independent-contractor delivery-driver of packages.  He has to first decide if he wants to pay a daily rental feel for a van from the company he’s going to work for or buy his own.  He and his wife are heavily in debt but he convinces her to sell their car so he can afford to put a down payment on a van, even though it makes her have to resort to the bus for her job as a caregiver for people in their homes.

Among their woes is a rebellious teen-aged son who chronically skips school to spray paint graffiti.  He sells his expensive goretex jacket that his parents splurged on for him to buy spray paint.  His goodhearted eleven-year old sister is the anchor of the family, though she makes a gesture trying to save them that has grave consequences.


Any delivery driver, as I can attest from my two decades as a bicycle messenger, is going to face plenty of adversity dealing with traffic and the police and bad addresses and belligerent clients and breakdowns of one’s vehicle. It doesn’t take much to have a bad day.  Loach doesn’t pile it on too heavily, but the adversity that climaxes the film goes beyond most driver’s worst nightmare. Both wife and husband are squeezed to the limit by their corporate minders, the thrust of Loach’s agenda.  The film rings all too true from start to finish.  There are no phony contrivances as questionable plot twists as in “I, Daniel Blake.”


“Rocketman,” the Elton John biopic, in the Palais immediately afterwards promised to be the perfect anecdote to Loach’s glum primer on the contemporary workplace.  There was plenty of lively music to revive my spirits, but all too much of the movie dwells upon John’s lack of self-esteem, battling a host of demons—an unloving father, alcohol, a manager who started out as a lover and then turned on him, loneliness and all the usual accessories of fame.  There are enough strong and inventive musical numbers liberally interspersed to more than carry the movie.  I was just hoping it could have had fewer lapses into the “woe is me,” not only to make it a more sustained upbeat experience, but for John’s sake as well.  But he is one of the producers of the movie and wanted that side of his story told.  The movie is framed around him attending AA at the height of his career.  It ends with a few blurbs stating he has been sober for 28 years and that he found a mate that he has been with for 25 years and that they have a couple of children.


It was another quick exit from the Palais and then back in through the same gauntlet of guards checking credentials multiple times and passing through a metal detector and having my bag inspected.  I at least had earlier confirmed that I can bring in my small water bottle, so don’t have to leave it on my bike.


“Atlantics” returned me to Dakar, that I had flown in and out of a year ago for my ride through West Africa. This film has been receiving much attention as the first film ever in Competition by a black woman, Mati Diop, who had acted in a Claire Denis film.  It had received the first four-star reviews from the Screen panel of critics of films in Competition, though premier French critic Michel Ciment had granted it but a single star.  He’s going to become known as “one-star Michel,” as he has given out more one-star reviews so far this year than all the other Screen critics combined.  His years of experience and discerning eye do not grant the moody style and mystical bent of this tale of a woman who is being forced into marriage with someone she doesn’t love the favor that others have.  The woman is particularly distraught as the man she loves has left without telling her on a boat for Europe in hopes of a better life.  Her camera shows frequent shots of the rough open sea, but never the crowded unsafe boat he has left on. There are reports that his boat has sunk not long after it departed with no survivors.  As with yesterday’s animated feature on Kabul this was a worthy effort, but nothing exceptional.

I don’t seek out Russian films,  but upon Ralph’s recommendation I checked out “Beanpole,” a gritty post-WWII film that takes place in Leningrad.  It is another women-centered film focusing on two nurses seeking male companionship in a world that has been greatly depleted of men.  Food is also in short supply. They are willing to resort to whatever measures necessary to supplement their meager diets.  Their predicament is more desperate than that depicted by Loach, but it wasn’t as gut-wrenching since one could disassociate from the reality of it and appreciate the re-creation of this world.

Thierry Fremaux, who is a fan of The Tour de France,  invoked Eddie Merckx when he introduced “The Climb” and then asked, “How many of you have heard of Eddie Merckx.”  There was just a smattering of applause.  “The Climb,” the first film by Michael Angelo Covino, who also stars in this American dark comedy, opens with two guys bicycling up a climb in France.  The stronger of the two admits he’d had a long affair with the woman the other guy is about to marry.  He wants to pummel him, but can’t catch up to him.  This is a nice prolonged scene of cycling that culminates with a fight with a guy driving a Deux Chevaux who cuts them off, sending one to the hospital.

The film is told in chapters over a dozen or so years as their friendship wanes and ebbs.  The second chapter takes place at a cemetery where the union gravediggers get in a fight with the stronger cyclist when he wants to throw a shovel-full of dirt on the grave of his wife.  There is no more cycling until the end when the stronger cyclist ends up running a small bike shop and then goes cycling with his friend accompanied by his son on a bike with training wheels.  The only faux pas was the word “peddling rather than “pedaling” in the subtitles.  This was enjoyable enough that I let it be my final movie of the day passing on the choice of a Japanese gangster film and another about a dancer with no English subtitles even though the French 24 reviewer Lisa Nesselson’s review said that it was engaging from the very start.

This was a rare day without a Market screening, only invited films, all with some degree of merit.

Posted by george christensen at 11:54 PM