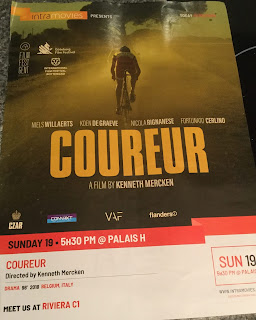 Thanks to a full-page ad in today’s “Screen” I discovered a Belgian cycling movie playing today that I had somehow overlooked in the program.  The ad didn’t do much good as only nine of us were drawn to “Coureur” for its lone screening during the festival, though at least the flashy ad would have alerted distributors to it.

The cycling is very authentic, training and racing in two hotbeds of cycling—Belgium and Italy.  A 19-year Belgian wins his national title as an espoir then joins an amateur team in Italy against the wishes of his father, a former racer who has raised the funds for a Belgian team to pay his salary.  That negotiation is one of many shady dealings that form the underbelly of this tale.

Drug-taking and blood-doping, including taking blood from his father, are treated as standard operating procedure, which will effectively kill this movie for the cycling community.  It is hard to believe it is as brazen as this film portrays, especially since the doctors and coaches providing the drugs from EPO to human growth hormone don’t give any advice on how to avoid detection.  It is generally accepted that riders this young aren’t drawn to drugs.  It’s not until they are a couple of years into their careers, some put the figure at 1,000 days, that the toll of the sport starts wearing them down to such a degree that they resort to unsanctioned assistance that could get them banned.

The team infighting, including a Russian waving a gun, a rider putting a stranglehold on a teammate at a meal over a salt shaker and a brawl breaking out at the end of a race among teammates upset that the young Belgian won the race defying team orders, also begged credibility.  But one couldn’t object to the ample footage of guys riding their bikes hard.  That never gets old.  The open monologue got it right with “If cycling is in you, you can fight it all you want, but it won’t go away.”

On the first of my two bag checks preceding the Competition screenings at the Palais today a guard discovered two oranges in a woman’s purse.  She wasn’t going to let them go to waste, so stood off to the side and gobbled them down before going in.  During both my entries women guards challenged my Sky water bottle, not recognizing it for what it was, suspecting that it could contain contraband of some sort. Later in the day a guard to the theater complex found my spoon and gave me a thumbs up for having my own eating implement.  Not since that one earlier incident when a guard discovered my pâté sandwiches has a guard checked the zippered pocket on the flap to my pack. That was really bad luck.

A Romanian film, “The Whistlers” by Corneliu Porumboiu, a Cannes regular, kicked off the day in fine fashion.  Whistling is how the residents of the Canary Islands learned to communicate in secret among themselves.  A corrupt Romanian cop who has gone to the Islands to recover 30 million euros learns the whistling technique to outwit those he is competing with, including his superior, a woman, to find the loot.  The intricate plot and first-rate filmmaking made this pleasant escapism.

The day’s other Competition film, “The Wild Goose Lake” from China, also featured cops trying to solve a crime, conducting a massive search for a cop-killer.  Just when it was beginning to look at the half-way point of the festival that rape had become a taboo subject,  it rears its ugly head among all the mayhem in this stylized thriller, though the rapist gets his head bashed in.

Between the Competition films I managed to get into the morning Alain Delon Master Class conducted, or “hosted” as the Festival terms it, by Samuel Blumenfeld of “Le Monde.”  It included a number of clips from films by Visconti and Melville, concluding with one from “Mr Klein” by Joseph Losey that Delon produced and was in Competition in 1976.  It didn’t win anything as it was about the still taboo subject of the French complicity during WWII of rounding up Jews.  It would be shown later in the day at his official tribute in the Debussy when he would be given an honorary Palm d’Or.  Delon said that Thierry Fremaux had been trying for years to get him to come and accept such an award, but he always declined, saying the directors of his films deserved it more than him.  Fremaux finally convinced him to accept it as all his directors have died and this would bring them recognition.

It stirred a bit of controversy when it was announced he would be receiving this honor from those who object to his right-wing politics and accusations of having abused women.  Throughout his interview with Blumenfeld he continually mentioned it was women early in his career who discovered him, as he had never acted, and were responsible for his success.  He further lauded women saying, “A camera for me is a woman.  It is like looking into her eyes.” After the first clip from “Purple Noon,” one of his earliest films from 1959, he stood up and said, “I’ve got to leave.  I don’t see how people can look at me now after seeing how good-looking I was then.”

He did three films with Melville and was planning a fourth when Melville died, literally as they were discussing it.  Melville broke into laughter and died having a laughing fit.  After another clip he was brought to tears he said remembering the actress in the scene, who had passed away.  I stood in line later in the day with an American who ended up at a party with Delon.  He said he didn’t know who he was and was amazed at how people reacted to him.  “He’s more popular than Michael Jackson,” he said.  “I’ve never seen anything like it.”

There was no Eiffel Tower in the French comedy “I’ll Go Where You Go” even though two sisters drive 250 miles to Paris for a tryout to be a backup singer for Celine Dion’s European tour. One sister is a struggling singer and the other a doctor.  They don’t get along and rarely see one another.  Their father begs his successful physician daughter to chauffeur her sister hoping that will heal their ruptured relationship.  She only agrees to do it after he tells her he’s just been diagnosed with cancer and must start chemotherapy the next day and bringing his daughters together is all he cares about.  The sisters are initially taciturn, but then can’t help but argue over past grievances. It gets so bad that a hitchhiker they’ve picked up abandons them.

This was the third French film I’ve seen in the past week with a party scene where everyone has a stick-‘em pasted to their forehead with a name on it that they’ve got to try to guess.  It must be the latest thing in France. Skydiving too must be gaining in popularity, as it was a subject in two of the French movies, one depicting an actual dive and another comparing writing a novel to skydiving, saying both are more difficult the second time.

The day’s final final, a French comedy “On A Magical Night” about infidelity had enough depth, artistic flair and dab of originality to earn a berth in Un Certain Regard.  It didn’t resort to the stick-‘em game, but it was authentically French with an abundance of smoking, even close-ups of burning cigarettes and assertations that a cigarette was needed when the action heats up.  There doesn’t seem to be any movement among French filmmakers to defuse the glamour of the cigarette.

A husband is quite distraught to learn his university wife of 25 years is having an affair with a student, claiming he has been faithful all their years together, though she doesn’t believe it thinking affairs are necessary to keep a marriage together as she has had many over the years.  He says he made a mistake marrying her and that his piano teacher would have been a better choice.  The wife leaves for a hotel across the street for the night and then has imaginary visits with lovers and friends from the past including her young husband from 25 years ago and his piano teacher, reliving the past and trying to resolve their present predicament.  She peers down upon her husband wallowing in his misery, making this less of a comedy than a drama.
Posted by george christensen at 11:24 PM

George, Since you can’t bring food into the theaters, do they have concessions inside and if so is it similar to here or geared to the French palate?

Food is not sold at the festival theaters, and just candy at the two town theater complexes the Festival uses. Food is discouraged so there is less refuse for the staff to clean between the screenings that come one after another.