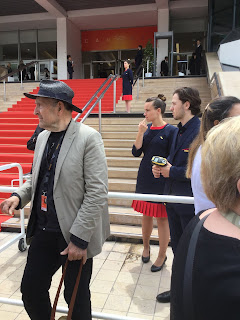 Today featured three films about strong-willed, fiercely independent women in France, Morocco and the US.  In “Adam” an unwed, very pregnant young woman is desperate to find work in Casablanca.  She randomly knocks on doors asking if she can work as a maid.  She is refused by all.  The last person to turn her away sees her sleeping in a doorway across the street from her that night.  She suffers a great quandary, before hesitantly inviting her to sleep on her couch that night, but not for more than two or three days.


The pregnant woman bonds with the woman’s young daughter, who is devastated when her very austere mother sends her away.  They go looking for her and invite her to return.  The mother, who is widowed, continues to be distant and barely welcoming until the girl cooks up a traditional noodle dish that she can sell at her small bakery.  She still resists anything more than a faint friendship, but decrees she can stay until she gives birth to her child, which she intends to put up for immediate adoption and then return to her village.  The Un Certain Regard jury may have to give the women a joint best actress award for their most resonating performance, unless they give the film the best picture award, which precludes giving it any other awards.

“Portrait of a Lady on Fire” also had two strong performances by its leads—a young woman who has been commissioned by a mother to paint the portrait of her daughter, who has no desire to be painted.  She has just left a convent and the mother in 1760 France has arranged a marriage for her with an Italian the daughter has not met nor wishes to.  They live on an estate along the sea in Brittany.  The two women take walks along the water as the painter studies her features then begins painting her on the sly.  As the two women in Casablanca, it takes a while for them to warm to each other, but once they do, they form an unexpectedly strong bond.

“The Conductor” is the exhilarating success story of Antonia Brico, who against all odds broke the gender barrier to become a symphony conductor in the 1930s—the first woman conductor of the Berlin Philharmonic Orchestra and then others.  Brico is of Dutch heritage.  She came to America as a child after her mother put her up for adoption, then returned to Europe as a young woman, where she had a better chance to overcome the prejudices against women becoming conductors.  It wasn’t easy at all.  She returned to the US before WWII and established an all women’s symphony with the assistance of Eleanor Roosevelt.  This Dutch feature strikes many feel-good moments—some contrived and others genuine.

“The Projectionist” was another great success story, this of a Cypriot, Nicolas Nicolaou, who immigrated to New York as a 12-year old.  He began work as a teen at a small movie theater in Manhattan and eventually built an empire of small theaters throughout the city including the legendary Village art house.  He is a long-time friend of Abel Ferrara, who recognized him as a fine subject for a documentary.  He returns to his roots in Cyprus and then spends considerable time hanging out with him in New York.  The title of the movie doesn’t really apply to him, as he was always a manager, not a projectionist.  When he began accumulating theaters in the ‘70s a good many of them were adult theaters.  He has turned down offers of millions for some of his properties, remaining loyal to the world of cinema.

It was a two documentary day, with the other an Italian production on the Prado museum commemorating it’s 200th anniversary.  This highly polished production is narrated with considerable vigor by Jeremy Irons.  Norman Foster also provides some commentary on the role he played in adapting the sprawling building that dates to 1630 that houses the museum’s vast collection comparable to the Louvre.  It even has its own Mona Lisa that was painted simultaneously as DaVinci’s by a colleague with the identical background and smile.  A representative of the film passed out brochures of several other films on art that his company is distributing on Monet, Gauguin, Caravaggio, Frida Kahlo, Tintoretto and one on the Nazi obsession with art.  They all looked worthwhile, some of which are presently available for viewing in the Market.

I hadn’t been granted an Invitation for the screening of Terrence Malick’s “A Hidden Life,” his much-anticipated first film in Competition since the Palm d’Or winning “Tree of Life” ten years ago, so I had to try to catch the repeat screening at 10:30 at the end of the day, not the best time-slot for this three-hour film.  I was fourth in line two hours ahead of the screening, allowing me to sit in the entry out of the rain.  The guy behind me sat with chin on chest getting a nap.

The sumptuous Austrian mountainous scenery was mesmerizing from the start.   A young farmer and his wife are being ostracized by his small village for his refusal to support the Nazi war-effort early in the war.  His priest is willing to take his conscientious-objector stance to the local bishop, but to no avail.  The day finally arrives when his draft notice comes in the mail.  He enlists but when he refuses to pledge allegiance to Hitler is thrown in prison ending up in Berlin.  He is threatened with execution, but remains steadfast in his stance.  His lawyer says he could be put on hospital duty, if he’ll only take the pledge, which should be easy enough to do since it is “only words.”

As is Malick’s style, there are occasional dreamy voice-overs, but not of much philosophical dissonance, just meandering questioning of fighting in an unjust war and if it is better to suffer injustice than to do it. Malick doesn’t make a particularly powerful indictment against war or make this individual overly heroic.  His wife visits him in prison as execution day nears and tells him she supports him in whatever he decides to do, against the arguments of all others who want him to save himself.  He doesn’t argue his case, so one just must grant him favor for being true to his convictions, which have never been strongly articulated.  This was no “Tree of Life.”

Posted by george christensen at 11:22 PM