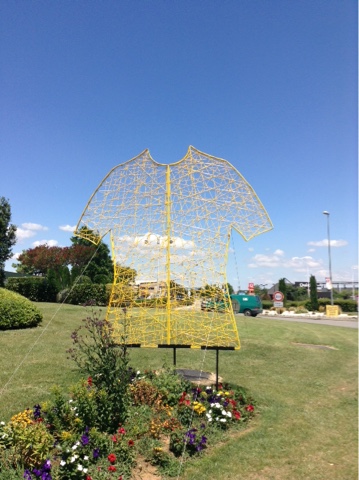 The return to the mountains, first the Juras, then the Alps, are two days away,  but they have suddenly gotten steeper for me as my freewheel gave out and I had to replace it with one that has four fewer teeth on its largest clog, a 28 rather than a 32. I'll be spending a lot more time standing on the pedals.  I don't know if my freewheel was a victim of the fierce winds that continue to persist, as I've been subjecting it to the sustained pressure of climbing an eight per cent grade all day, or if over 30,000 miles of wear finally did it in.

It began slightly skipping yesterday in my evening stretch until it just completely stopped engaging.  I could only propel the bike scooter-style, pushing off with first one foot and then the other.  I would rest the other foot on a pedal.  After a couple minutes when I applied some pressure to the pedal I felt the freewheel click back in and I could resume pedaling.  All remained well the next morning except a wind that hadn't lessened one bit during the night. Where it was coming from I couldn't imagine.  This was a worse wind that any I've encountered, even in Iceland.  At least one could blame the persistent winds of Iceland on glaciers and the North Pole and the open sea all around it.  Here the blame probably resides with climate change.  Days of such wind in France in the summer are unheard of.  It is an ill wind. of course, that doesn't blow any goodwill and it had been largely ill until today when I was passing through fields of lavender and the strong winds blew their rich aroma over the road.  For a spell it was luxurious, despite the effort to keep the bike upright and on the road.

When my freewheel next spun out on me I was on the outskirts of the city of Bollene twelve miles into my day.  It was large enough to have a Decathalon, a large sporting good store that also does bicycle repairs.  I couldn't have been luckier unless I had been way layed at its very doorstep.  Not many towns in France have a bicycle store.  I could have been stranded thirty or forty miles from one.  My GPS device indicated it was 1.4 miles of scootering away.  It wasn't yet nine, but on the way to the store I passed a supermarket, so I could take care of my daily replenishment of my food supplies. 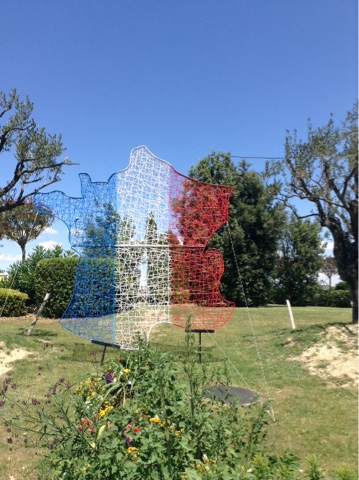 It was too much to hope for that the store would have the over-sized freewheel I prefer.  The 28 largest ring they had was my second lowest gear.  My other touring bike doesn't have as low a gear as this one.  I use it on trips when I know the grades won't be as steep as the Alps can be, though sometimes they are and I manage.

The wind once again was severely limiting my mileage.  I had to stop much earlier than I wanted and with much fewer miles than I would have liked to watch the day's time trial.  I couldn't risk missing this crucial stage.  The 23-mile course had two significant climbs and would take a bit less than an hour to ride.  The climbing eliminated from serious contention the former World Champion time trialists Fabian Cancellera and Tony Martin, who excel on the flats, and favored the climbing time trialists Froome and Demoulin, who had both already won stages in this year's Tour.  And they lived up to form, with Demoulin winning and Froome finishing a minute behind.  Froome couldn't be disappointed though, as he gained significant time on all his rivals, which Demoulin isn't.  He ranks 40thnoverall, nearly an hour behind.  He had to wait over an hour after he finished for the rest of the riders to finish.  The camera flashed on him occasionally as he sat in front of a wall of Tour sponsors.  When the camera caught him eating, the announcers commented, "Bon appetit."

Quintana finished 20th, two minutes behind Froome, putting him three minutes back overall, more than he ever was last year.  He no longer appears to be a threat.  Mollema, who hung with Froome on Ventoux the day before, showed he is for real with a strong time finishing sixth fifty seconds behind Froome. In the overall he is in second 1:47 behind Froome and 58 seconds ahead of Yates, who continues to lead the young rider competition.  Mollema is Dutch as is Demoulin.  Holland has gone even longer than France, over thirty years, since it had a Tour winner--Joop Zoetemelk.  It's not likely that either will win this year, but they give their country the best hope it has had in a long time for the future.  Mollema rides for the American team Trek.  His lone American teammate, Peter Stetina, predicted before The Tour that Mollema could be the surprise of The Tour.  That is proving true.

In the battle between the BMC teammates, Van Garderen bested Porte by 18 seconds.  Porte finished with the same time as Quintana.  Van Garderen, the American hope, moved up to sixth overall 3;19 back, while Porte sits in eighth, 4:27 back.  Van Garderen is within striking distance of fourth, an improvement on his two fifth place finishes, but the podium is probably out of range.  But with four days in the Alps and a truly uphill time trial to come, there is still a lot of racing ahead that will provide opportunity for all and drama aplenty for us fans.

Most of the riders today opted for a solid rear disc wheel despite the windy conditions.  They would have had ample opportunity to test them and receive feedback from teammates who had already ridden, so they weren't taking any great risk.  I noticed Froome wasn't wearing gloves despite a long-sleeved aerodynamic jersey.  It was too late to see if the other Sky riders did the same thing as another marginal gain the team had discovered or if it was just a personal choice of Froome or if he may have simply forgotten to wear them.  He is known to be absent-minded, once forgetting to pull the tissue he stuffs in his nose soaked with eucalyptus oil to open his breathing passages while he warming up on his trainer before the prologue in Liege a few year ago.  Having his nostrils blocked was an adverse effect.  I'll be checking for gloves at next week's time trial.

I was hoping to make it to the Big Screen for tomorrow's finish but the winds have put a kabash to that.  I needed the twenty miles I was denied yesterday and the thirty today to make it.  I'll have to be content to watch the peloton pass thirty or forty miles from the finish and then watch the finish on television once again.  Still not a bad way to be experiencing The Tour.
Posted by george christensen at 2:08 PM