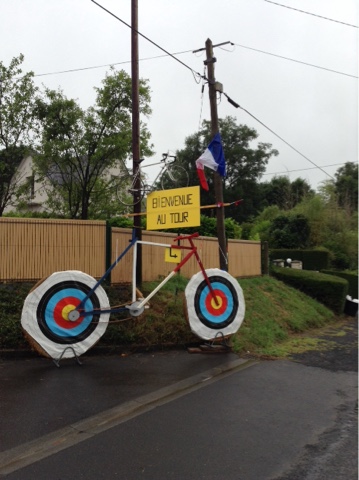 I anticipated a day free of the stress of worrying about being ordered off my bike.  My plan was just to bike a few miles down the course to the first town where after the entertainment of the scramble for the caravan giveaways I could make a quick getaway down a side road south to the end of Stage Six where I would next meet up with The Tour while the peloton rode east today.  Even though I was on the course before eight, I still had to suffer that sensation of hands tightening around my neck until the full stranglehold was applied and I had to stop riding, as the gendarmes were already in place at every intersection and the official closing of this early part of the course to non-official vehicles was eight a.m.

I saw it being overlooked by people pulling out of their driveways, but I knew my hopes of getting to that town five miles from my campsite were in jeopardy.  Fortunately the gendarmes placed at these early junctures were older officers who appeared to be desk workers in the latter end of their career  and not the hard corps enforcers of the officers on the street.  None stepped out into the road with folded arms to stop me as their more hardened brethren love to do.  Most ignored me, but a couple called out a meek "Fermé" which was easy to ignore as I passed.  If they had been real gendarmes they would have been equipped with whistles and blasted me, alerting officers further down the course that a transgressor needed to be stopped.  Some might enjoy the fun of defying the gendarmes, but it constricts my heart and takes the joy out of being at The Tour.

I sweated out being quarantined along the side of the road for three hours and made it to my destination.  At the intersection where I'd be continuing the town's small, modern town hall was a block away.  They generally have a sign pointing to a WC to the back or side.  When I didn't see one I ventured inside with my two empty water bottles to ask.  The lone person on duty, a dour, not very friendly, older woman, told me there was indeed a toilet out back.

Outside a side door to a conference room was open.  I ventured inside to see if this related to some Tour activity and if I might spot an electrical outlet.  The room was empty, but moments later two guys followed me in telling me I shouldn't me there.  They could see my loaded bike and knew I was a harmless cyclist brought to the town by The Tour.  I told them I was following The Tour and asked if I could charge my tablet until the caravan came.  One said I could try a cafe across the street, but he was overruled by the other.

We went back in where the woman was at her desk and he told her what he was doing.  Later as I sat along the road shoulder to shoulder with the townsfolk I noticed my benefactor on the other side of the street greeting everyone, the men with a handshake and the women with a kiss on the cheeks.  He was the town mayor and doing his best to stay on the good side of everyone.  He certainly would have had my vote.

There were several small child near me, including two Africans, who darted after everything the caravan tossed with a startling blink-of-the-eye quickness.  I made no effort for anything except a couple of most welcome madeleines that fell at my feet and another packet of sausages.  In year's past the madeleines came in packs of three, but this year they were just singles.  When I returned for my iPad I gave the woman one of the madeleines.  Her face lit up with delight. 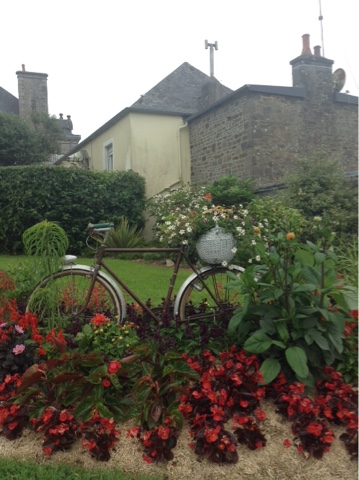 Though I hated to be leaving The Tour, the peace and tranquility and being able to ride without a strict deadline was a welcome reprieve.  With the weather now warm and sunny this was cycling at its finest.  My legs were fully conditioned allowing me to ride all day without fatigue setting in.  I just needed to keep eating and take an occasional rest.

I would have liked to have watched the last hour of the day's stage with its two category two climbs, the first of this year's Tour. The peloton would climb past the magnificent Puy Mary that I had biked by in May on my way to Cannes when the road had been lined with snow.  But I was still pressed for time to ride nearly two hundred miles this day and the next to meet up with The Tour again, so I didn't stop early but pushed on until fifteen minutes before the stage end.

I had to ask the bar tender to turn on the television as all his clients were sitting outside in the sun.  Once people were reminded that The Tour was in action they ducked in to give it a look. Greg Van Avermaet of BMC, one of three American teams in The Tour,  had five minutes on the peloton and looked set to win on the climb to the largest ski resort on the Massif Central--Le Lioran. One older guy asked the bar tender if the leader was French.  When he was told he was Belgian he returned to his seat in the sun.

Van Avermaet crossed the finish with arms aloft and an ecstatic smile showing no agony from his exertion, though he later said, "The last kilometer I could enjoy it a bit, but before then there was so much suffering."  His efforts also earned him the Yellow Jersey.  That's good news for Froome as his team will now waste energy defending it that could later cost BMC contenders Porte and Van Garderen.

I pushed on until ten once again, putting me within ninety miles of tomorrow's finish.  It will take some luck to arrive before the peloton, but I will at least meet up with it for the start of the stage the day after on the eve of the Pyrenees, where The Race will truly begin.

Posted by george christensen at 2:35 PM