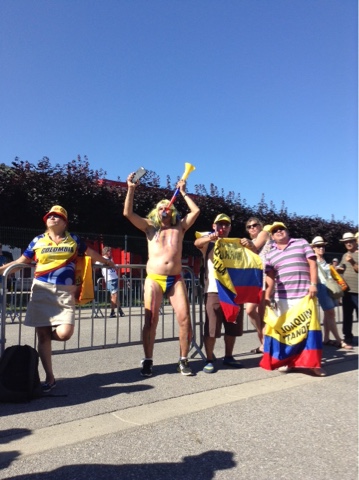 The raucous Colombian fans peering up at the Giant Screen beyond the finish line of today's stage had their cheers rewarded when Jarlison Pantano, one of four Colombians in The Race, outsprinted Rafai Majka to take the stage for the IAM team.  It was an extra sweet win for him, as he is looking for a new team next year, as IAM has announced that it is ending its sponsorship. Though Majka had to be disappointed with second, he at least had the consolation of taking the Polka Dot Jersey.
The clown with the horn blasted the damn thing at ear-piercing decibels for nearly two hours straight right up to the end of the stage. He must have been too frightening for the many gendarmes in bullet-proof vests to curb his flagrant disturbing of the peace.  Every thirty minutes the broadcast of the stage was interrupted by an announcement in French and English to be "vigilant" and not to leave one's bags unattended and to report any strange behavior.  Why he wasn't reported, I know not.  I remained as far from him as possible in a slowly dwindling sliver of shade up against a building, but that wasn't far enough to avoid a headache from his noise-making.  If Quintana had his vigor and fierce defiance, he'd be leading The Race by half an hour.
Quintana had another benign day sitting on Froome's wheel over six passes in the Jura Mountains while a group of thirty non-threats to the Yellow Jersey were up the road.  For the first time in five days wind was not a factor, though the heat was.  I was sweltering even in the shade as I sat for three hours watching the race unfold with the day's final climb in the background. 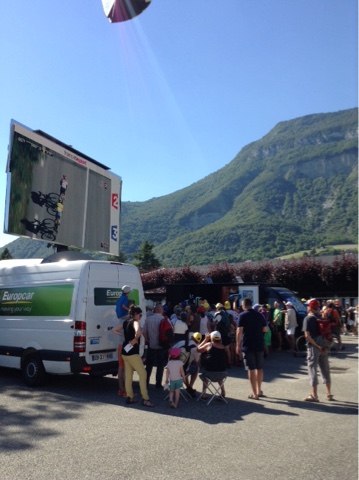 Froome had all eight of his teammates with him at the head of the peloton fully controlling matters through the first half of the stage, letting the breakaway group maintain an eight-minute advantage.  With the Beyond Category Grand Colombier climb several of Froome's lieutenants faded away and then Aru's Astana team upped the pace.  The only significant casualty was Van Garderen, who ended up losing a minute-and-a-half to his top ten rivals, falling from sixth to eighth and twenty seconds behind his teammate Porte.  None of the top four (Froome, Mollema, Yates, Quintana) showed any aggression with this being a non-mountain top finish, saving their dramatics for the four upcoming days in the Alps starting Wednesday. 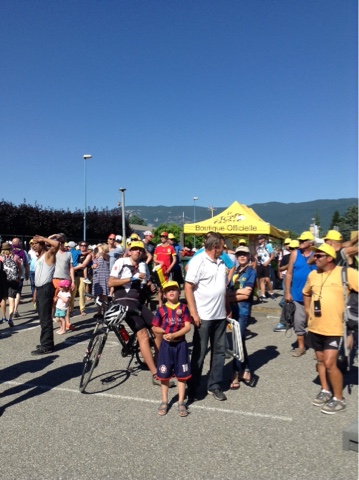 Before they tackle the high mountains they have a relatively flat stage tomorrow into Switzerland and then a rest day.  Tomorrow's stage ends in Bern, the hometown of Fabian Cancellera, who will retire this year holding the record for the most days in Yellow by a rider who hasn't won The Tour--twenty-nine.   If the peloton had room for sentimentality, they'd let him win the stage.  But there is too much at stake, so he'll have to win it on his own.  He didn't overextend himself today, finishing twenty-eight minutes back, just ahead of Sagan and all the sprinters.
There will be no Switzerland for me, as the transfer from Culoz to the start of tomorrow's stage in Moirans-en-Montaigne is too long and mostly uphill.  I'll being able to visualize both of tomorrow's Ville Ètapes though, as I visited them both a month ago and noted their preliminary Tour preparations.  Instead, I'll head to the large city of Annecy in search of a bike shop with a freewheel larger than the 28 I've been riding with the last couple of days in deference to my knees.
Three French riders finished in the top seven today, but France still remains without a stage victory, as do Italy and Spain.  It's the first time in ninety years that none of these cycling powers has had a stage win by now.  At least they each have a rider in the top ten.  Great Britain is the only country with more than one--the first and third placed riders Froome and Yates.
As I was headed into Culoz this morning a guy on a bike asked me in very bad French if I spoke English. I said, "Yes, I'm an American too."  He was a New Yorker and was excited to be experiencing The Tour for the first time. He was on a rental bike and was staying in a hotel a few miles away.  He asked where I intended to watch the stage.  I told him about the Giant Screen at the finish.  He'd seen plenty of The Tour on television and wanted to be at the roadside, hopefully up the Lucets du Grand Colombiere climb which began in Culoz before the plummet back into the town.  He had to push his bike up, as the road was already closed at noon.  He was going to have a long day in the sun awaiting the peloton.  If he didn't melt away I may see him in the days to come.
Posted by george christensen at 1:04 PM