Both yesterday's time trial and today's stage included the Côte de Domancy, a steep climb up from the small village of Domancy.  Yesterday the riders went up it one by one and today they descended it in mass.  The climb was the key feature of the 1980 World Championship Race that Bernard Hinault won in dramatic fashion.  Before yesterday's stage a monument commemorating Hinault's win was unveiled in a round-about on the main highway leading into the city of Sallanches, just two miles from Domancy, that hosted the World Championships.
Domancy had long ago erected a monument of its own to Hinault.  It welcomes one to the village. 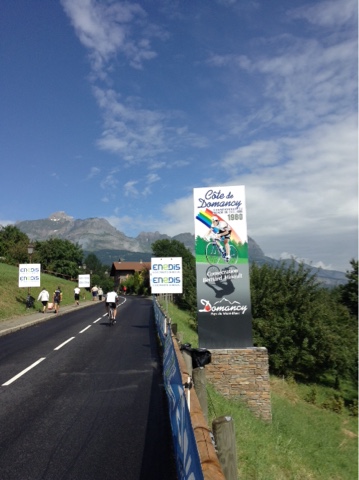 The Côte de Dormancy added to its lore today when Froome slid out on the rain-slickened road on his descent, which could have ended The Tour for him. He wrecked his bike and tore gaping holes in the backside of his jersey exposing splotches of bloodied flesh scraped raw by the pavement.  He quickly appropriated the bike of his teammate Geraint Thomas and resumed riding, somewhat tentatively at first, but then back to nearly full capacity, despite being on a bike with a different set-up than he's accustomed to. Luckily his wounds seemed to be just scrapes.  It was less than ten miles to the finish, a six-mile Category One climb.  He was able to regain the group he was riding with as it began the climb.  Only at the very end did he waver and lose a few seconds to Quintana, but not to the second and third placed riders, Mollema and Yates, as they both had struggles of their own and fell off the podium, Mollema all the way to tenth and Yates to fourth, eleven seconds behind Quintana.
The rain caused havoc, with double stage winner Demoulin crashing out and others taking a tumble as well, including Mollema.  Porte was caught behind a crash and needed the help of his teammates to catch up.  Van Garderen wasn't one of them as he was more than half an hour back with the laggards just trying to make the time cut.  We'll find out tomorrow if he rode so woefully because he's depleted, or so he could go for the stage win on the last day in the mountains tomorrow.  Porte finished seventeen seconds behind Froome, but is still within fifty seconds of Quintana and the podium.  All will be on the line tomorrow.  The podium could undergo another complete overhaul.  Froome still has a four minute advantage, but how stiff will he be?  After the stage he said he'd be okay, but as he accepted his Yellow Jersey he had a wrap around his right knee to go along with his raw back.
The day's big winner was Bardet, who won the stage and jumped from fifth to second.  The French at last won a stage. And if Froome had crashed out, the French would have had the Yellow Jersey with just two stages to go, one of which is largely ceremonial.  The nation would have been in an uproar, what with it being over thirty years since Hinault was the last French winner.  When Bardet dropped his breakaway companion on the climb to the finish the crowd I was amongst watching it happen on a Big Screen in Mégeve's plaza erupted into applause. 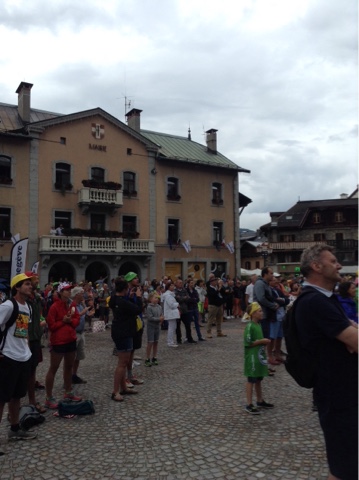 They applauded again as he approached the finish and then when he crossed the line.  He gave a smile of great satisfaction and sincerity, as if he was happy not only for himself and his team, but for all of France.  It wasn't one of those exuberant, self-indulgent smiles of extreme ecstasy, but a deep, genuine, somewhat abashed smile, tempered by a degree of modesty.
Even though it leaves him just a heartbeat or a crash from the Yellow Jersey, he's keeping his ambition in check.  He wasn't so emboldened as to say this proves he can win The Race, rather saying that next year he hoped he could keep up his streak of winning a stage a year.  That's not an attitude that Hinault endorses, though he won't be around next year to encourage him to do better, as Hinault has announced that he will be retiring from his podium duties so he can spend more time with his grandchildren.  He retired prematurely from racing at 32, and is withdrawing from the whirlwind of The Tour when he looks to be as vibrant as ever.
I had planned to be at the finish of today's stage, just fifteen miles from Mégeve where I had camped for the second straight night, but the threat of rain deterred me.  I was kept in my tent until nine by the rain, almost preventing me from descending the Côte de Domancy to Sallanches to see the Hinault monuments, as I didn't want to do it on a wet road, plus I knew I had to be back to Mégeve by two before the roads were closed.  I could manage the climb in the rain, but I didn't want to continue to the stage finish, a six-mile climb with a nine per cent grade, and face the possibility of having to come back down in rain.  And this was before I saw all the carnage the rain later produced.
The morning rain was disheartening, as I really wanted to see the Hinault monuments. I had twice been thwarted in my efforts over the years to find the one in Domancy.  I was under the impression that it was in Sallanches, since it was the host city for the World Championships.  In two previous visits to Sallanches I couldn't find anyone who knew anything about a monument to Hinault.  And then when I met Himsult at the Critérium de Dauphine last month I forgot to ask him about it.  But with The Tour including the Côte de Domancy, there were articles about Hinault's World Championship win and what a crucial role the climb played in it, making it seem likely that's where some memorial would be placed.  I thought it might be a small plaque on a rock at the summit of the climb.  When it wasn't there I tried the town's plaza and found someone who pointed at it down the road.
My ride down to Sallanches was also rewarded by a marvelous giant bicycle swing along the road by someone's home.  As I stood in the road taking a photo, someone shouted a warning of "voiture" from the second floor of the house, though I did hear the car coming. 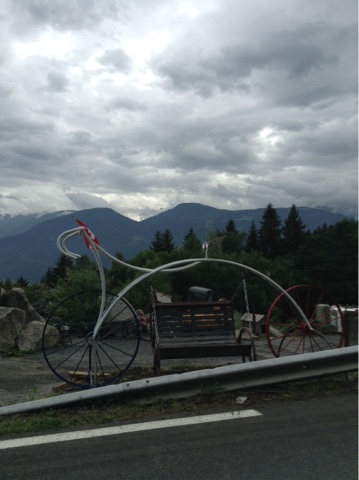 There was also a tree of bicycles in a roundabout on the seven-mile climb back up from Sallanches. 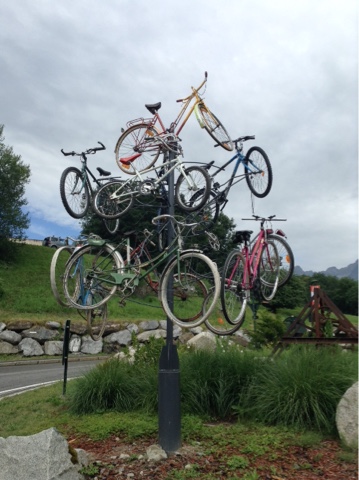 If the day had been clear, enabling me to watch all the day's dramatics on the Giant Screen at the stage finish, I would have missed out on another dose of caravan frenzy.  It is actaully heartwarming to watch how happy it makes all those gathered along the road to get free stuff.   All await with great snticipation, as if it is Christmas Day, wondering what Santa will bring them.  Young and old are filled with glee when they get their hands on something, even without knowing what it is, and adding it to their stash of goodies. People dive and scramble for whatever comes flying. 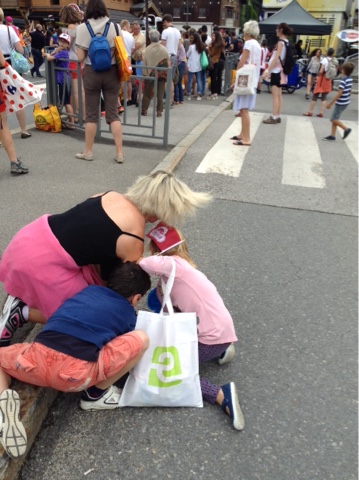 They quickly examine what they've grabbed and then rush to show it to whoever they're with and then get ready the next item. 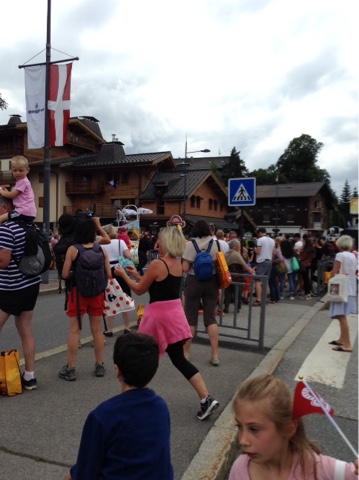 No one was happier on this day, not even Bardet, than the little English girl who nabbed a water bottle flung by a rider when the peloton flew past.  I wasn't there to see it, but I saw her reenactment of running and grabbing it later in the town square.  She cradled the bottle as if it were a doll.  She let her slightly older brother clad in a Sky shirt hold it, but not for long.  For half an hour my attention was divided between watching all the excitement on the Bog Screen and this little girl's glee.  She kept showing it to her mother and her father, and fondled it as if nothing could be more valuable.  Seeing The Tour is a momentous occasion for any child, but even more so when one comes away with a rider's water bottle. 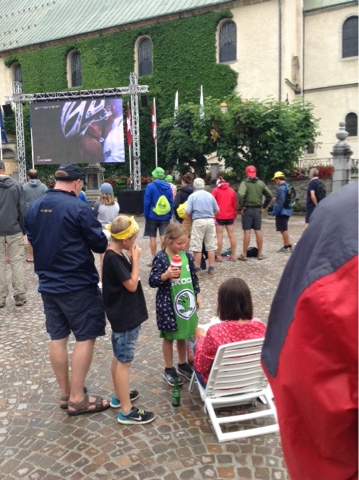 Posted by george christensen at 6:29 AM

Cycle smart coaching provides cycling fitness coaching service NZ with effective training program that is tailored to fit the needs of each bike rider taking into account their goals, ability, and other responsibilities. Cycle smart coaching offers great services to group of riders who are looking to train together and helps in achieving their goals.