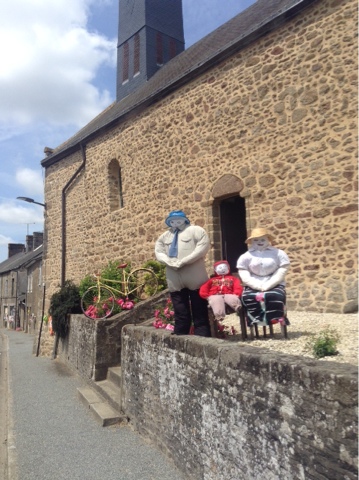 The 119-mile seventh stage from Livarot to Fourgéres was so rich in bike art that riding the route was like spending a day in a world-class art museum.  It was exhilarating and inspiring.  This was Brittany with a deep cycling traditional having produced icons Hinault, Bobet and Robic, so this was to be expected.  The communal art celebrating The Tour went well beyond the usual yellow and green and red polka bikes that are scattered along every stage of the route perched on rooftops and dangling from poles and occupying flower beds.  One never grows tired of such gestures, but they rarely merit a second glance.

Along this stretch there was such an abundance of original interpretations of the bike and figures mounted upon them, I was continually brought to a halt to give them a thorough study, just as one responds to an exceptional canvas or sculpture when meandering through a museum.  I was fortunate to be previewing the route and in no great rush so I could give in to my impulses and let them thoroughly touch my soul.   I'm looking forward to seeing them all again on race day, though I'll have to speed past and just give them a glance.

There was random art all along the route but three small communities stood out in particular, fully transforming their towns into full-fledged exhibition spaces.  The starting and finishing towns also had a nice array of tributes to The Tour and The Bike.  Livarot is one of six first-time host cities, and the smallest of the more than thirty Ville Étapes with a population just over 2,000.  As a first-timer it had bike decorations galore, but didn't go much beyond the usual. It is known for its cheese and had an over-sized package promoting The Tour in each of the round-abouts leading into the town. And around the bend were the usual assortment of bikes. 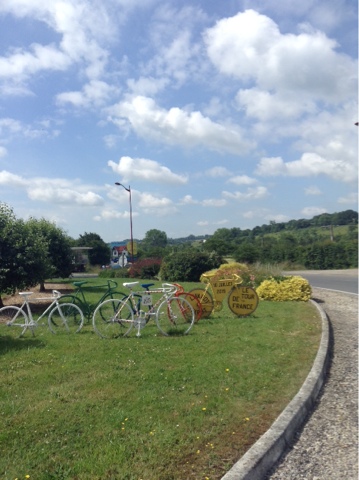 Nearly every shop in the town had a bike-themed storefront. 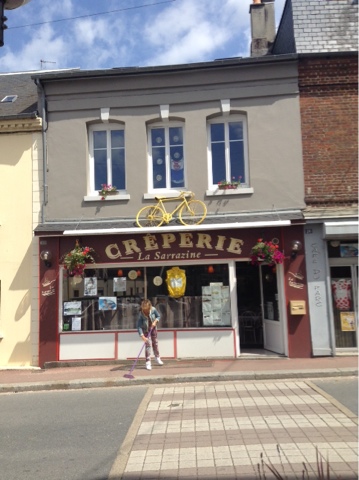 Shop windows were adorned with jerseys or bicycles or painted figures on their windows. 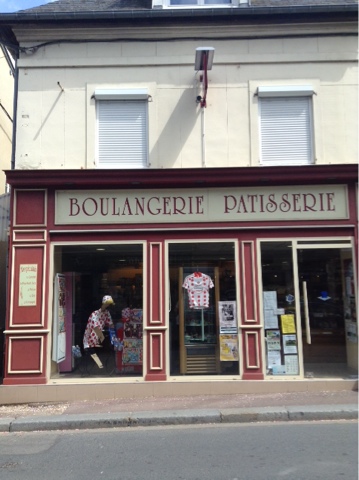 But it wasn't until Vimouters, ten miles down the road, that I came upon something exceptional.  All through the town were extra-terrestrial-looking wooden figures mounted on bikes.  Some were solitary. 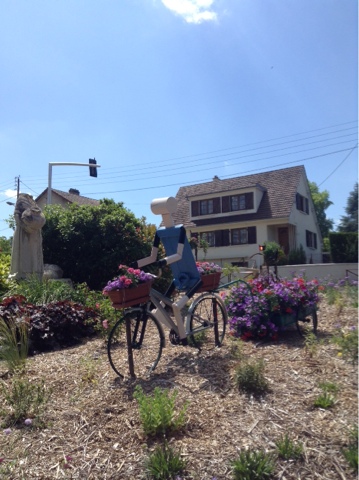 Others came in pairs. 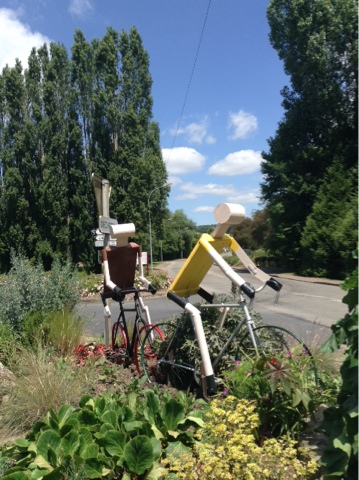 And some were in a bunch. 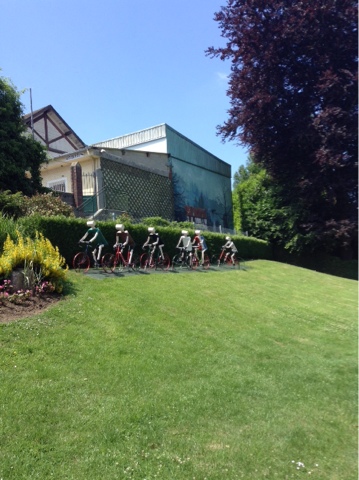 The smaller village of Levaré further down the road featured art of an even more wacky nature.  The first was of a cyclist crashing head-first into a course vehicle with two spare bikes mounted on its roof as once happened to Eric Heiden during the 1986 Tour, the only one he rode, and is a danger all dropped riders face when they are trying to regain the peloton by illegal drafting. 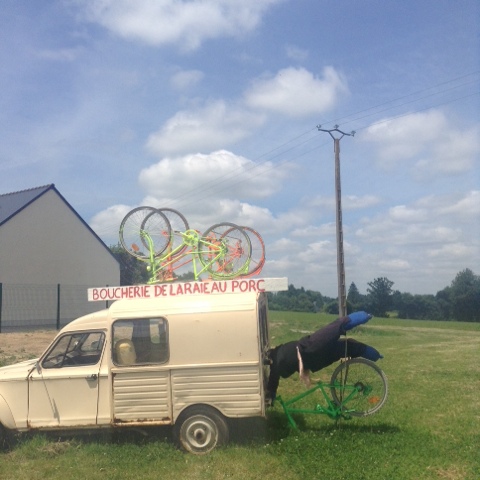 All through town were other stuffed figures, though in less traumatic poses.  One was of the town preacher in his vestments on a bike attacked to the town cathedral.  French have a long tradition of creating realistic scarecrows.  It is an art form that is recognized in festivals and competitions.  If it weren't for WWII canceling the first Cannes Film Festival in 1940, the first Palm d'Or winner could have gone to a scarecrow movie--"The Wizard of Oz." 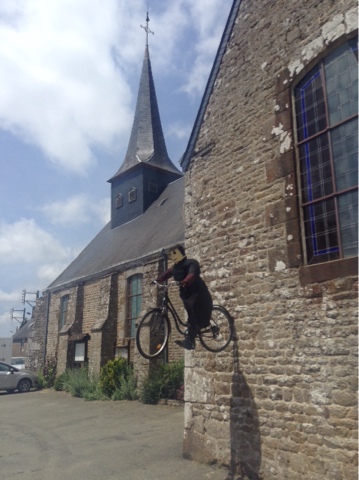 A couple of stuffed elderly ladies, who'd certainly keep the crows off the corn, sat on a bench beside a pair of rusty old bikes. 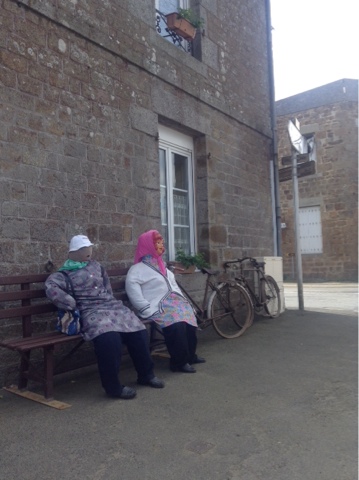 The equally small town of Tanniére had a Vive Le Tour welcome on its outskirts with a stuffed figure on a bike in the distance. 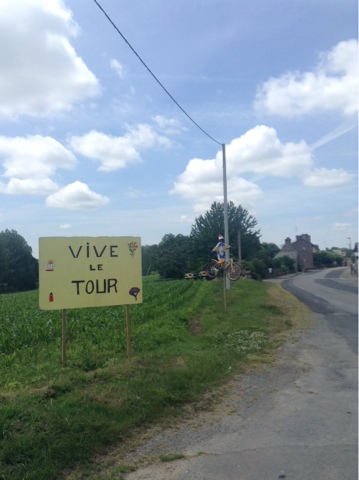 All through the village were more stuffed figures, some on bikes and others masquerading as spectators, who represent The Tour as much as the racers. 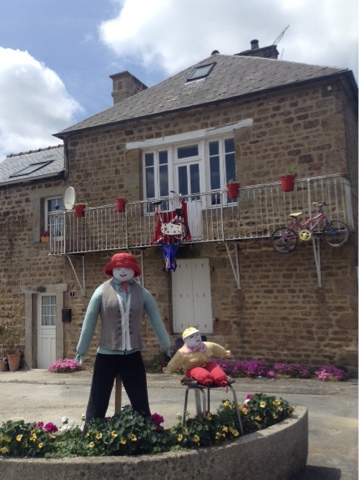 One figure had a bucket for a head. 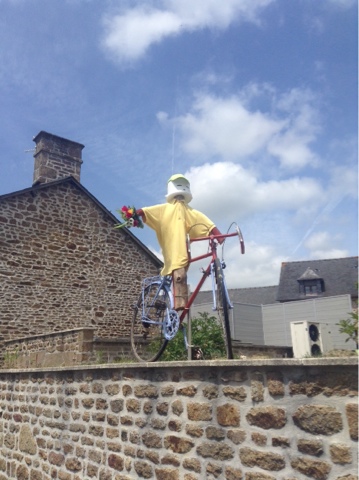 There were also a few giant bicycles along the route, a common sight, but with an uncommon figure. 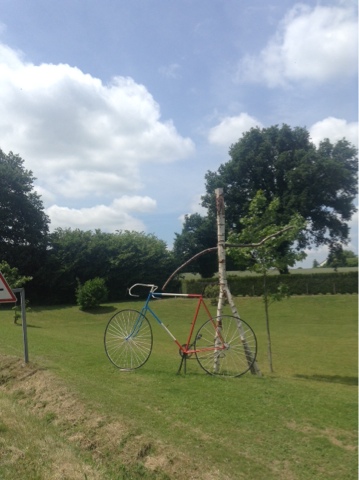 One town advertised its Tour party with a poster that had a yellow and green helicopter with red polka landing skids hovering above the peloton. 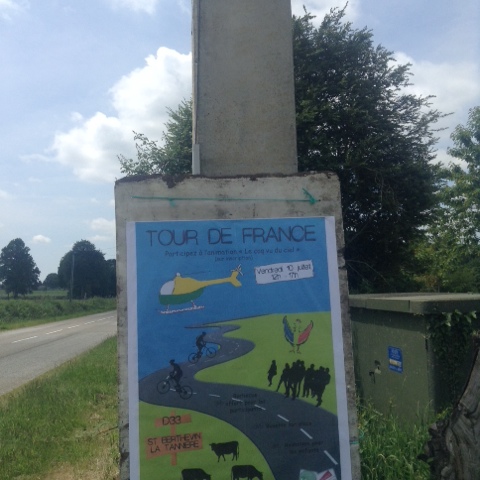 The Tour is frequently compared to Christmas, as communities on the route anticipate it with fervor for months and then they are rewarded with all sorts of goodies from the publicity caravan.  One farmhouse on the route adorned itself with half a dozen Santa Clauses on bikes.  Two were on its roof by its two chimneys, another was across the street on the barn and a trio were on a bike on a wire. 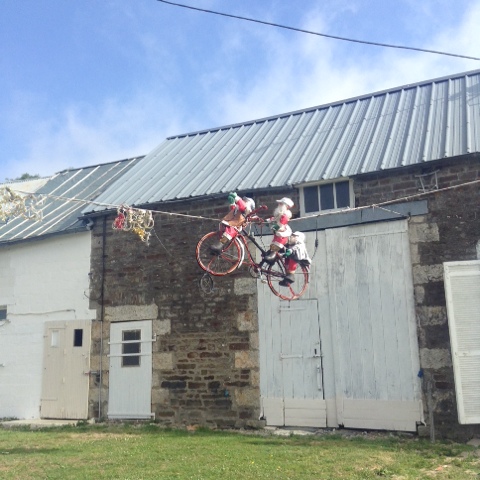 At the finish in Fougères a round-about included several figures on bikes designed with a minimum of swooshes. 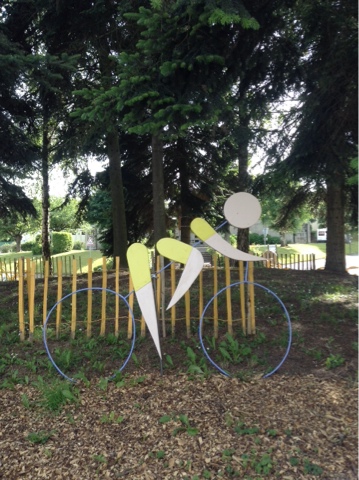 There was also a more solid figure, though still riding a minimal bike. 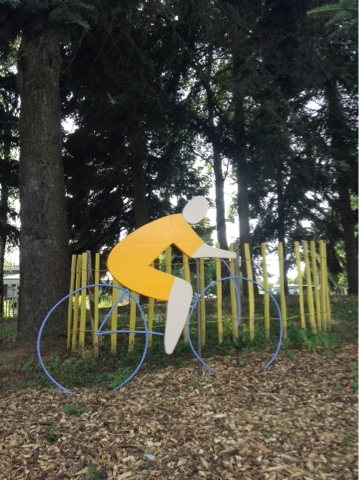 The light poles on the finishing stretch were all adorned with yellow wheels.  It is more than three weeks before the peloton and I will be riding past them.  There will no doubt be lots more decorations all along the route, especially when communities see what their neighbors have done and they will try to equal it.  I was told by one tourist office that they were late with their decorations, but there would be some.  I'll be riding past them all with a boundless sense of anticipation and gratitude.

Posted by george christensen at 2:09 AM