The Stage Nine team time trial may be only seventeen-and-a-half miles long, but it concludes with a mile long climb with a six per cent grade that will certainly cause some separation among the contenders.  Since the team's time is recorded after the fifth of their riders crosses the line, it will add considerable interest and intrigue to each team's strategy.  It is a climb of enough significance to be named--Côte de Cadoudel.   And it is notorious enough to be featured in several of the paintings on the shop windows in the town where the stage concludes--Plumelec. 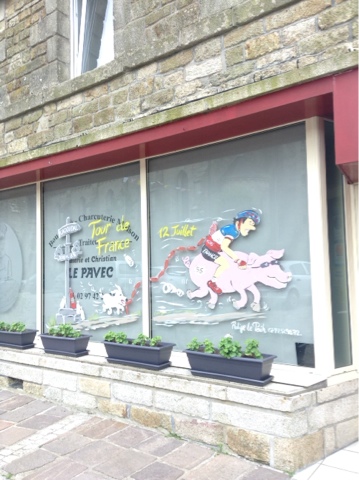 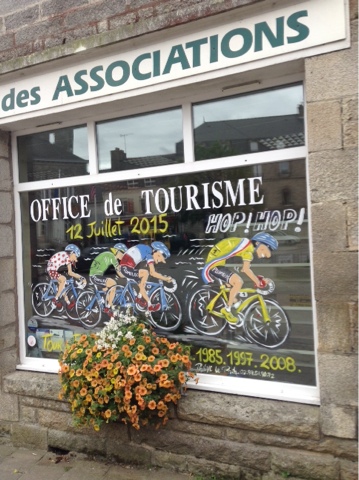 This quiet, small town of centuries old, weather-worn stone buildings had left all its decorating so far to the artist Philippe Le Paih.  His window paintings more than sufficed to dress up Plumelec.  They each celebrate The Tour and capture its flavor and its many subtleties and charms.  He is a full-fledged aficionado.

No two of his paintings are the same, even from town to town.  Each is adapted to the business behind the window. The tabac shop, which sells magazines and newspapers, featured a rider reading "L'Equipe," the incomparable French daily sports newspaper.  It is in the upper echelon of the many  things that I like most about France. 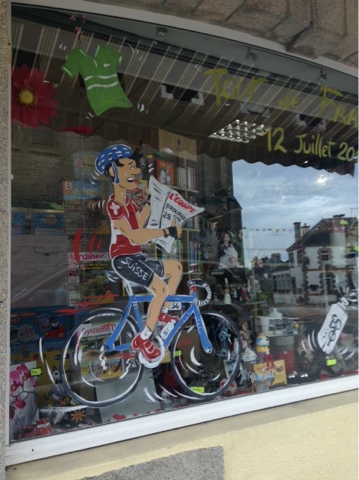 A few shops down a bank window featured one of the many things that make The Tour such an exceptional event--the super fan who dresses as The Devil.  He is taunting a racer with sweat flying on the six per cent climb. 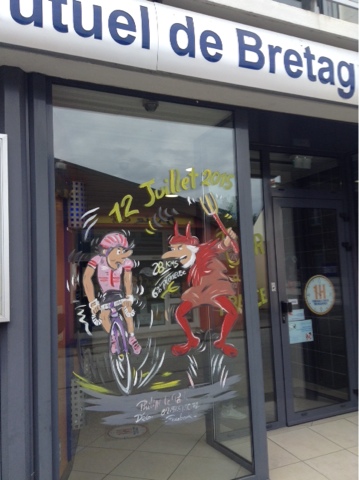 Another window paid homage to Bernard Hinault, a favorite son of Bretagne, as acknowledged by the region's black and white flag.  One of his sponsors from thirty years ago, Look, can be seen on his shorts. 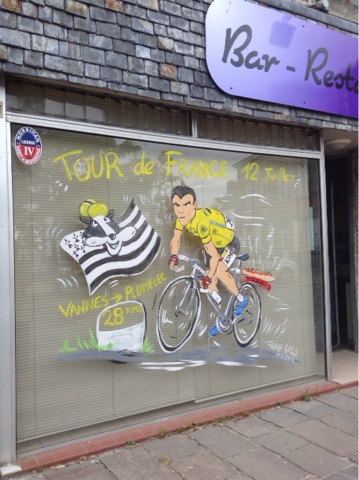 Le Paih's art was also widespread in at the stage start in Vannes, at least along the race route in this large city that is connected to the Atlantic by a narrow inlet.  The racers will make their start in the Place de la Libération, just above the grand town hall decorated with the official Tour poster. 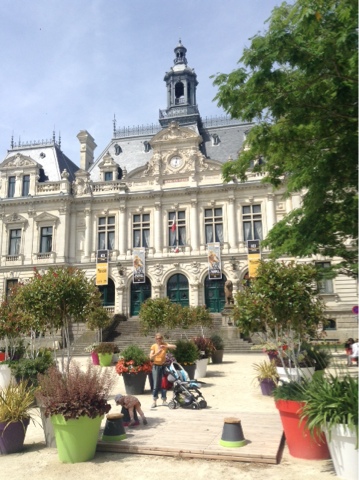 They will proceed for two blocks down a narrow street lined with businesses before passing the town hall and turning on to a main street that descends to a harbor and then make a steep climb past a building boasting a thrillingly large Tour poster. 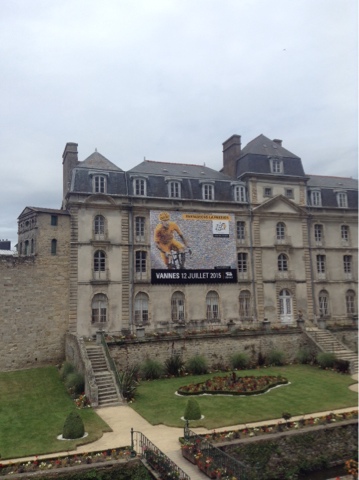 Nearly every business on the opening stretch had a Le Paih.  I wasn't the only one making a leisurely stroll, pausing before each to appreciate their every nuance.  The cyclist delivering bread for the boulangerie had a tattoo of a bicycle on his bicep. 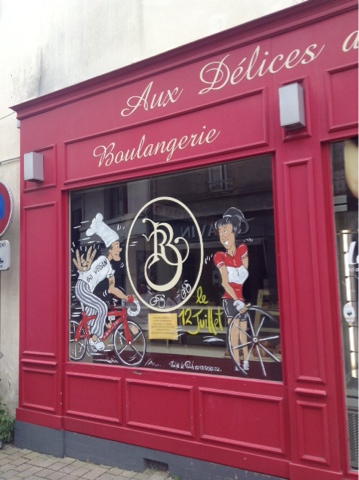 A thirsty racer on the window of an Irish bar had a few bottles of Guinness in the pockets of his jersey. 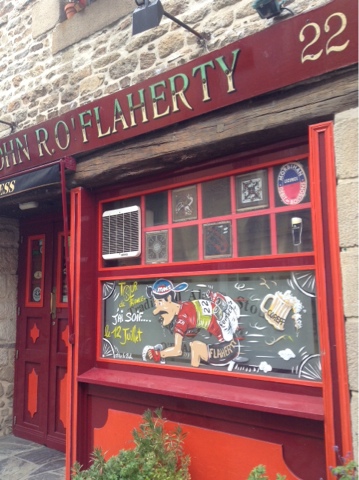 A female cyclist in a version of a nurse's uniform adorned a doctor's office window. 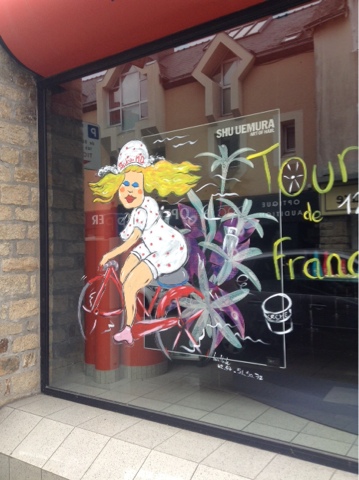 A horse was taking a hunk out of the derrière of a racer in the window of the PMU bar that broadcasts horse races from all over the country. 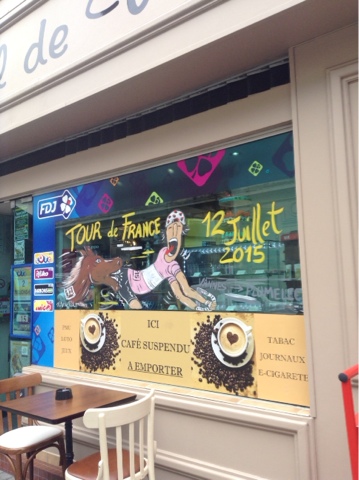 Le Paih isn't the only artist who practices window painting.  On my way to Vannes off The Tour route a bank in a small town featured the work of an unnamed artist honoring two locals who had distinguished themselves in The Tour--Jean Robic, the 1947 winner and Françoise Le Her, who was a teammate of Jacques Anquetil in the 1950s.  The French do remember. 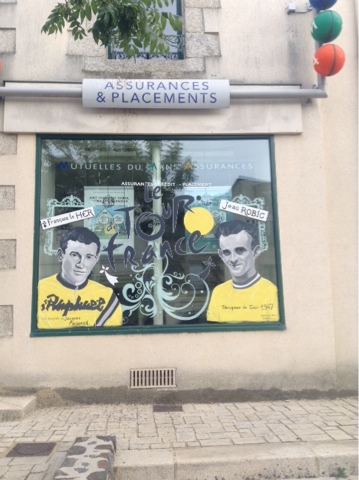 Robic's home town, Radenac, is fifteen miles north of Plumelec.  It is much smaller, no longer large enough to support a bakery.  In the main plaza was the most unlikely of sites--a small vending machine dispensing baguettes, fulfilling the French need for their daily baguette. 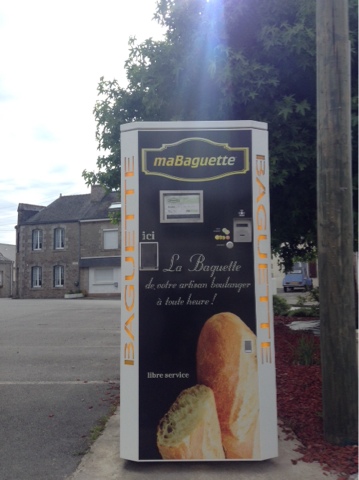 Radenac advertised itself as the home of Robic, a great national hero who won the first post-WWII Tour with a dramatic breakaway on the final stage taking the Yellow Jersey from an Italian.  The only thing worse to the French of an Italian winning their Tour so soon after WWII would have been a German winning it, but that couldn't have happened as none were allowed to compete that year or for several years more. 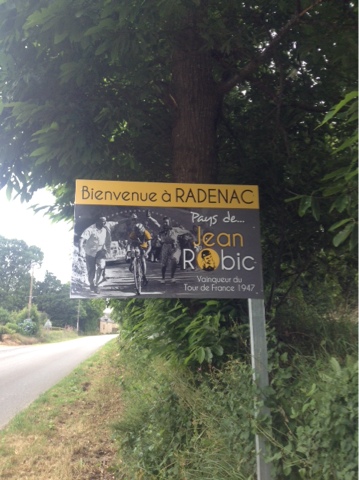 A street behind the cathedral had been named in his honor. 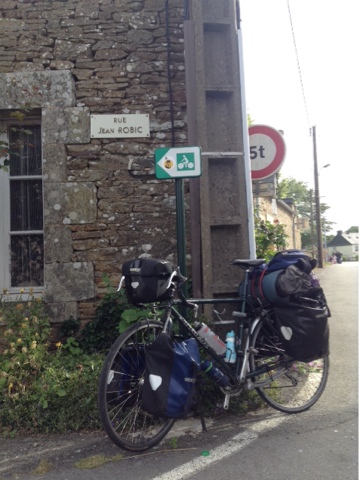 It was included in a one hundred mile loop around the region named for Robic. 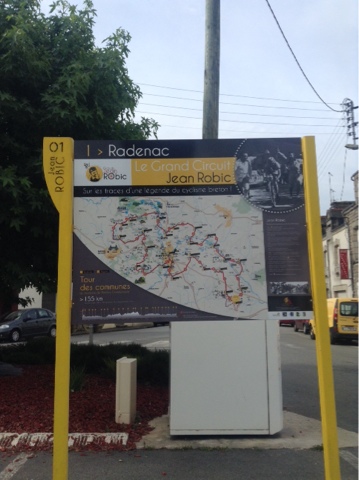 If I'd had a little more time I could have made a detour to the city of  Ste.-Anne-d'Auray west of Vannes where Robic's Yellow Jersey hangs in its basilica.  I was just happy to have made it all the way to Vannes, the western-most Ville Ètape of this year's Tour, and the start of the last stage before The Tour's first rest day and a 400-mile transfer to Pau and the Pyrenees.  The peloton made a similar transfer two years ago, except in the opposite direction.  I skipped several stages and pedaled the entire distance save for a few miles with Yvon in his car.  This year for the first time in my twelve years of following The Tour I will treat my legs to the train.  I bought my ticket while in Vannes.  It will depart at 7:30 Monday morning after Sunday's time trial.  I will arrive in Pau ten hours later after transfers in Bordeaux and one other city.

Posted by george christensen at 4:04 AM