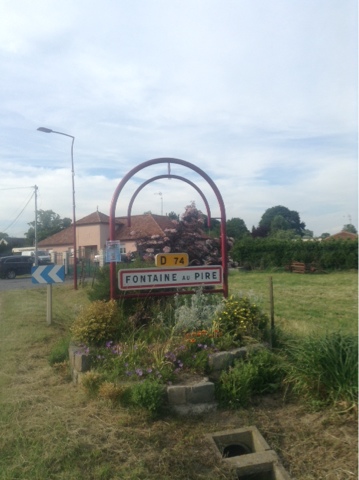 This year's Tour de France route may be less of a tour of the country than any previous route since that first one on 1903. Rather than making a loop around the country, as was the initial practice, this year's route is nine stages across the top of the country and then eleven stages across the bottom before finishing with a largely ceremonial stage from a suburb of Paris into the city.  There will be two transfers by plane of 500 miles from the north to the south and then 300 miles from Grenoble to Paris.
After scouting out some of the route through the Alps I've been in Tour withdrawal the past two weeks as I've put nine hundred miles on my legs biking along the eastern edge of France through the demanding up and down terrain of the Vosges and the Ardennes up to Cambrai, the finish for the fourth stage, the first stage finish in France after two in Holland and one in Belgium. There has been plenty to see, including the birthplace of Rimbaud in Charleville-Mezieres, but I haven't been able to preoccupy my mind on the upcoming Race, now less than three weeks away, as much as I'd like.
About ten miles before Cambrai I stopped off in Fontaine-au-Pire, the smallest town ever to host a Tour stage, hoping to find some plaque or monument celebrating the event.  There was none to be found, not on the welcoming sign to the town of 1,217 or on its Town Hall or small stadium or in its central plaza.  The town hall had two plaques relating to the Second World War, but nothing on The Tour's finish there in 1983. 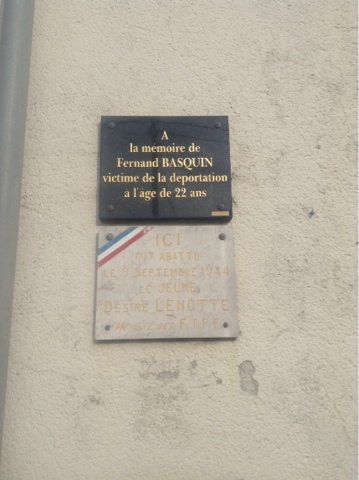 It might have been because the town was suppressing the memory of the tragedy of that visit.  It was supposed to be a Ville Arrivée in 1982.  It was going to be the greatest event in the town's history.  Great expense and effort had gone into winning the honor of hosting The Tour.  Striking workers, though, blocked the stage before it could reach Fontaine-au-Pire and the town was denied the thrill of having Benard Hinault and all the other great cyclists of the time grace its streets and being telecast all over the world.  It was devastating.  The Tour made it up to the town the next year with a Team Time Trial finishing there, but it wasn't the same.
I camped in a small field on the outskirts of the nondescript town of largely brick row houses.  I was woken by a pack of barking dogs out for a run with a man who sells dogs.  He warmly welcomed me, thinking I might be a pilgrim following the Santiago de Compestelllo route, as it passes nearby.  He was delighted to learn I was an American, but confessed to not much caring for The Tour de France.  He said The Tour coming to his town was a "catastrophe" and best forgotten.
I wondered if that would be the case as well as I approached Varennes-en-Argonne two days before.  It was there in 1891 that Louis XVI and Marie Antoinette were captured in the middle of the night fleeing the country.  I had asked in the tourist office in Verdun, thirty miles away, if there was a plaque commemorating the event and where it might be in case it happened on a road outside the town.  I was told there was a plaque in the town square.
Actually there was a series of plaques, written in French, Englsih and German,  throughout the town detailing all the events relating to the capture of the King and Queen.  They were promoted as the "Tour de Louis XVI." 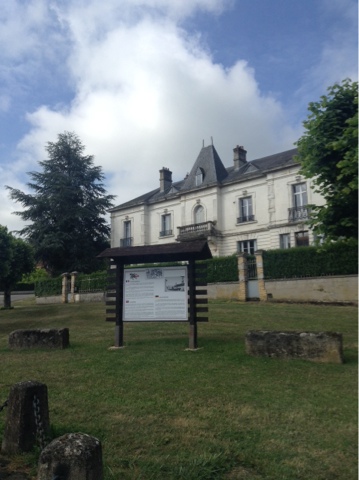 They had made their escape from Paris at 2:30 in the morning in two carriages, the King and Queen in one and members of their retinue in the other.  They reached Varennes at 11:30 p.m. that night.   They had stopped several times for fresh horses. Varennes was their final relay point, just fifteen minutes from crossing the border of France at that time to safety.  At their last exchange someone suspected who they were.  He and a companion set out after them, not catching up to them until Varennes.  While the royals waited for new horses they rounded up anti-royalists to waylay them. The two became  national heroes.  People from all over the country sent them money and presents.  Friction arose as others who had assisted were envious of their acclaim and the spoils they reaped.  Varennes for a time was also celebrated for its role in detaining the King and Queen, but the town went into decline when those of wealth, who sided with the King and Queen, left the town.  A year-and-a-half after the capture Louis was sent to the guillotine on January 21, 1793.  Nine months later Marie-Antoinette suffered the same fate.
Varennes remains a quiet small town.  More prominence was given to the battles of WWI that were fought in the vicinity.  Verdun is nearby, where the most prolonged and bloodiest fighting of the war took place.  There was a musuem and a large memorial to the American fighting forces with the Stars and Stripes flying high above it on General Pershing  Road, the main street through Varennes. 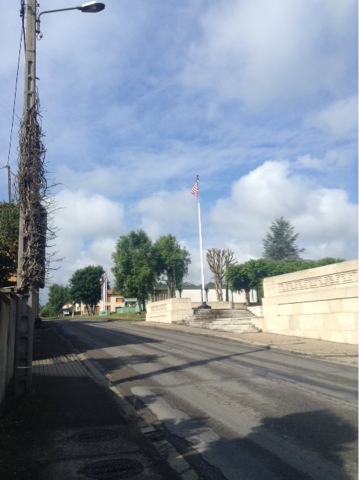 A few miles north of Varennes, outside the smaller town of Romagne-sous-Montfaucon, is the largest American cemetery in Europe with 14,246 graves.  It is one of twenty-five American military cemeteries scattered around the world, all in Europte except ones in Tunusia, the Philippines, Mexico and Panama. 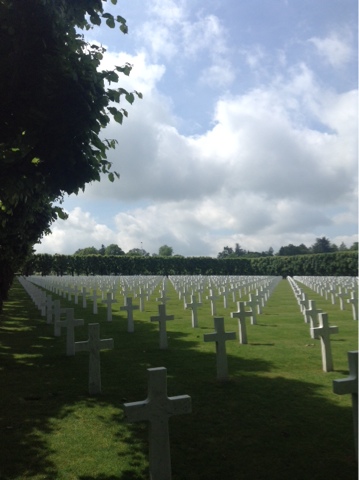 It is one of six American cemeteries in France from WWI.  There are six others containing WWII casualties.  There were scattered small German cemeteries as well, not as well maintained and with dreary brown crosses. 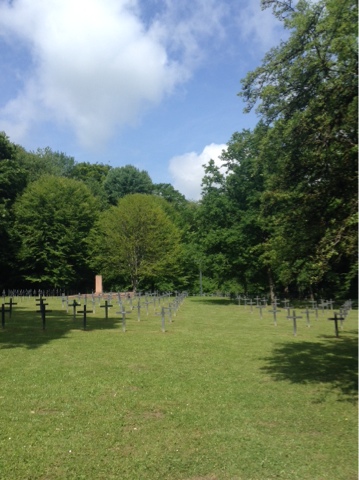 As I bicycle across the northern tier of the country scouting out The Tour route there will be plenty more cemeteries to come, including the largest of the French with 40,000 dead, north of Arras, start of Stage Five.  The legs are coming around.  I'm far enough north now that it doesn't grow dark until after ten p.m.
Posted by george christensen at 1:29 PM