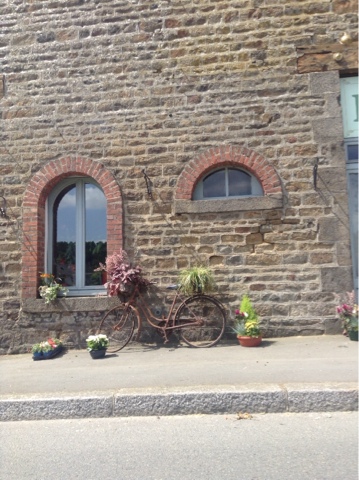 I may be off The Tour route but that doesn't mean that I don't come across decorated bikes.  Businesses and residents and towns all recognize that a bicycle can attract attention and is an object of beauty worthy of display. 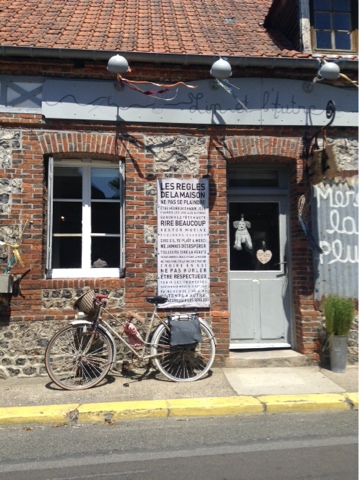 The bicycle has the unique capacity of making one feel good, whether by riding it or looking at it. 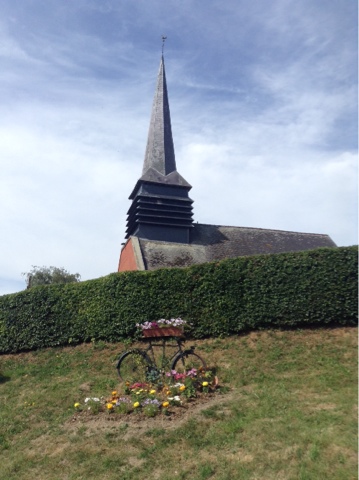 As I pedal six hundred miles back across the top of France and through Belgium to The Tour start in Holland I have sought out roads that I have not ridden, though it has included a few stretches that I just rode.  A few of those miles were in the big city of Rennes, start of the eighth stage.  When I passed through Rennes a few days ago, it was Sunday morning.  The tourist office was closed and I couldn't find anyone who knew where the official Tour start would be.  I knew which road the peloton would follow north out of the city, but not how they would get there.

So I returned to Rennes, as it is a large sprawling city, to find that starting point in case it was in some sports field on its outskirts, so Vincent, David and I would waste no time trying to track it down.  There were no Tour banners to be seen in Rennes, which could have led me to the start, as they often line the route.  Not were there any strings of mini-cellophane Tour jerseys across any streets, as are a common site in Ville Ètapes, also indicating The Tour route.  An explanation for this lack of declaration became evident when the Rennes tourist office charged me twenty cents for a city map, something that most tourist offices give away.

If the city coffers were so bereft of funds that they had to charge for a single sheet of paper showing tourists how do find things in their city, then they could hardly have the funds for banners or even yellow paint to spray on old bikes.  There wasn't a single sign for The Tour in the Le Liberté plaza a few blocks from the tourist office where The Tour will start.  As a stood in a corner of the huge treeless Soviet-style plaza searching for something Tour-related, a young woman approached me and asked for money, a first in France.

The Plaza was on the route of a walking tour of eighteen significant sites in the city center of Rennes.  It included the city hall, opera house, cathedral and various old buildings.  Also noted was a municipal building named for Émile Zola where the second trial of Alfred Dreyfus was held in 1896, indicating how deeply imbued the Dreyfus Affair is in the French consciousness.  Dreyfus was an army officer convicted of selling secrets to the Germans.  He adamantly denied the accusations and had many supporters.

The issue deeply divided the country.  Dreyfus was Jewish.  Zola sided with Dreyfus and wrote an open letter to the president of France famously known as "J'Accuse," blaming Dreyfus's conviction on anti-Semitism.  It helped Dreyfus get a second trial, but he was found guilty a second time despite convincing evidence that he was innocent. Zola was convicted of libel for his letter and fled the country to Great Britain.  In time both Dreyfus and Zola were exonerated.

The Dreyfus case also has a bicycle connection as it indirectly led to the creation of The Tour de France.  The sporting newspaper that initiated The Tour  was started by a group of advertisers who thought Dreyfus guilty and didn't wish to advertise in another sporting newspaper that took the editorial stance that he was innocent.  The anti-Dreyfus paper, "L'Auto," was struggling and searching for ways to survive.  It dreamed up The Tour de France in 1903 and became wildly successful.  It will be interesting to see if The Tour's promenade through Rennes before the flag is dropped will take it past the Zola building.

I also needed to return to the start town of the seventh stage, Livarot, to visit an exhibition honoring two local cyclists.  It wasn't open when I visited Livarot nearly a week ago. On my way there I passed through Mayenne and crossed the MacRacken Bridge over the Mayenne River, now more of a canal than a river.  I stopped in the tourist office to ask if the town had a library.  It did, but it wasn't open until later in the day.  Per usual, as I turned to leave, I was asked where I was from, not because of my accent, but for their records.  When I said, "America," I was told, "That bridge over there is named for an American soldier, MacRacken.  He saved it in WWII from being blown up by the Germans when they were retreating.  They blew up the other two bridges in our city.  He was a hero."

As I approached Livarot on the same road I had ridden before there were a few new decorations.  One was a simple but elegant trio of bike wheels painted the colors of the French flag in front of a cathedral. 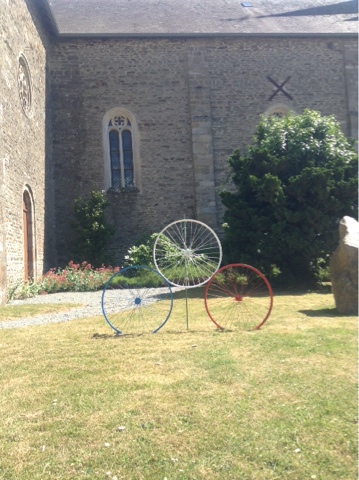 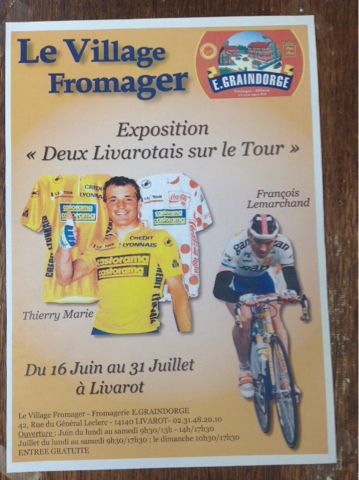 It also traced the history of The Tour in the region, listing every stage that had passed through dating to 1905 in the third Tour and who had won it.  The exhibition was held at the cheese factory among the many rooms winding through the factory giving an excellent tour of the operation.  Each room had a video in French with English subtitles explaining the process of making cheese, emphasizing how important it was to one's diet providing essential bacteria for one's digestion.   Some rooms had windows looking down upon the factory.  There were several bus loads of French tourists taking the free tour and getting a little bicycle racing mixed in with it.  There were jerseys and trophies and numerous newspaper articles and team photos on display.  Lemarchand was on Greg LeMond's 1990 team when LeMond won The Race for the third time.  Marie was known as the King of the Prologue, as he won the mini-time trial that starts The Tour in 1986, 1990 and 1991.  He also won the prologue in the Vuleta and the Giro.

A woman at the factory was painting some bikes to put out along the road. 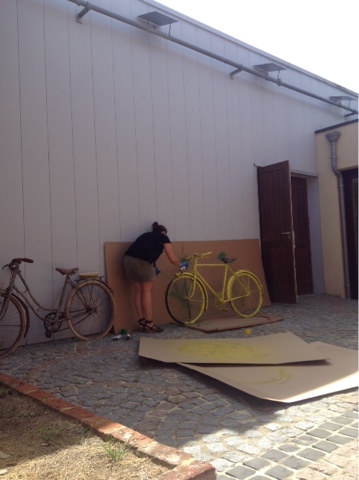 Just down the road at Notre Dame de Courson, the first town the peloton will pass through after leaving Livarot, a sign had been hung giving Lemarchand a "grand merci" for helping bring The Tour to Livarot this year for the first time.  Signs of thanks are not unusual along the course, another unique aspect of the French and their Race. 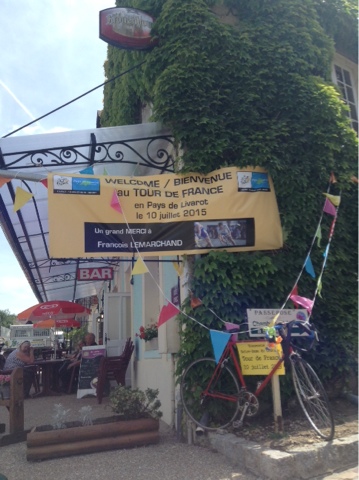 Now its on to Rouen where Joan of Arc was burned and also the site of homages to Jacque Anquetil and Jean Robic.


Posted by george christensen at 7:54 AM