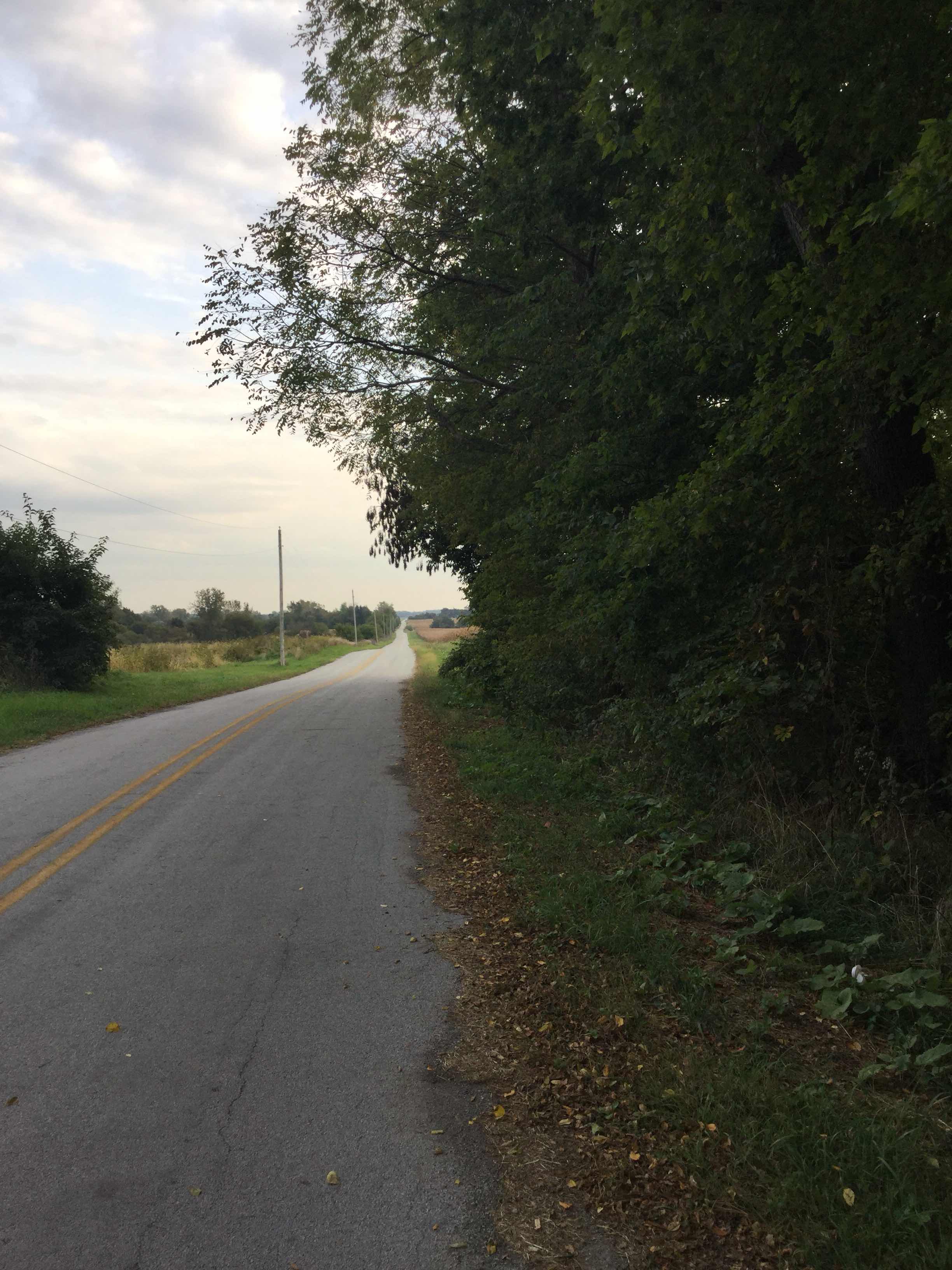 Never has the road beckoned so strongly.  It’d  been two months since I’d had a ride of more than twenty miles.  It wasn’t a broken collarbone or some other calamity that had derailed me, but rather a pair of film festivals and the choice of driving to them.  The first was in Traverse City.  The day after I returned from The Tour de France at the end of July Janina and I drove up to Michael Moore’s film festival as we have five of the past six years.

This year, rather than returning to Chicago and taking the train out to Colorado, we made a drive of it, continuing north another hundred miles,  then cutting across the U.P. and on through South Dakota to the Badlands and Standing Rock and Wounded Knee and a few other noteworthy places, camping all along the way. It was a nice immersion into the West, though I would have much rather have been on the bike.  One of the highlights was stopping at the top of a climb in Wyoming in 90-degree heat to give a touring cyclist a cold drink.  We had a cooler with several cups of ice, a cyclist’s best friend on such a day.  The cyclist was a young woman from Seattle on her first tour.  She had that touring cyclist glow of ecstasy with not a whimper of complaint. 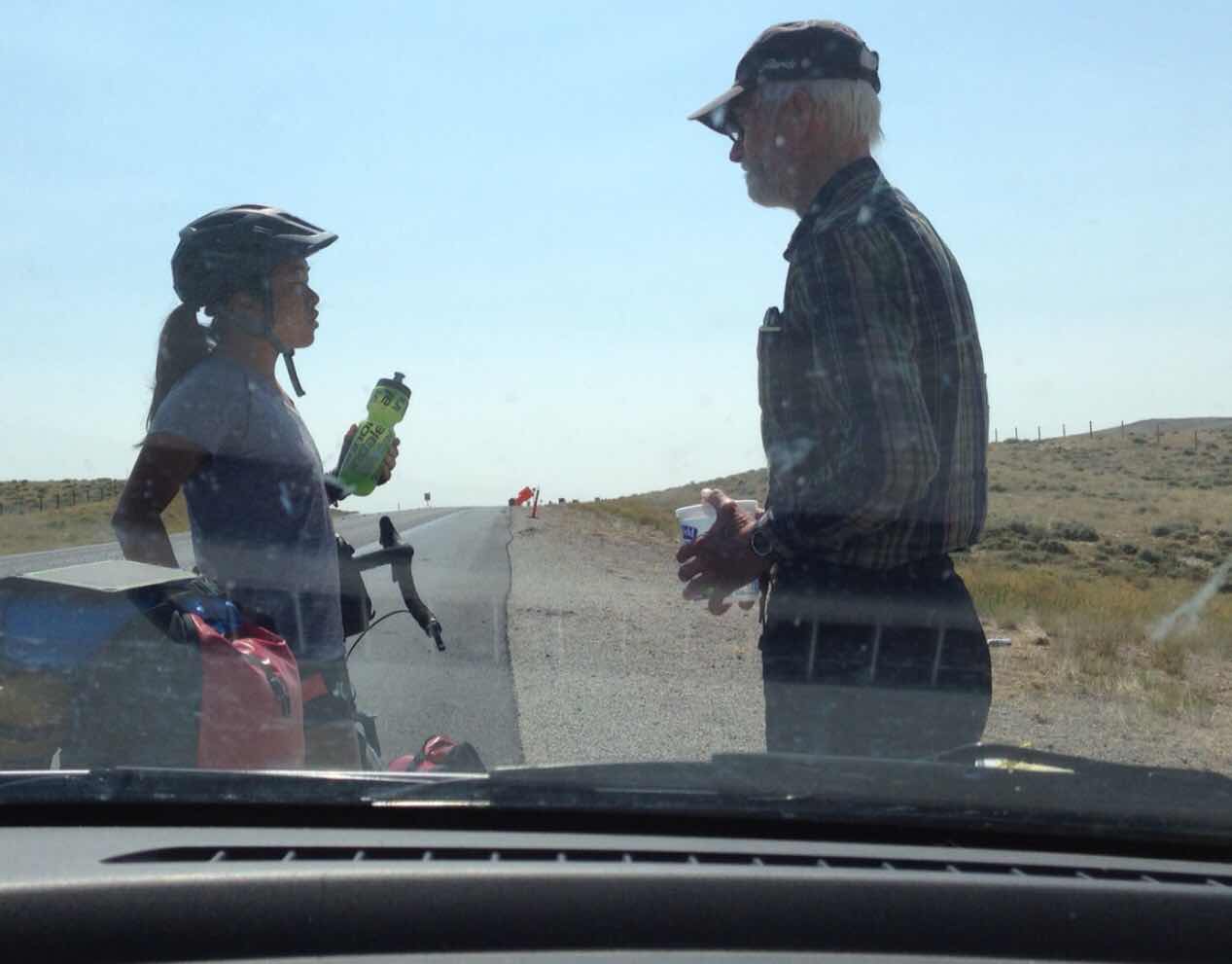 After a month in Telluride we took two weeks to drive back to Chicago with a detour through southern Utah visiting its great National Parks—Canyonlands, Arches, Capitol Reef, Bryce, Zion, Monument Valley and Hovenweep. The parks were packed, even post-Labor Day with kids back in school, though there were some who were being home-schooled.  The biggest surprise was all the Europeans.  A German couple even asked us if Americsns visited their National Parks. We were able to do a little bicycling along the way, but  hardly enough to satisfy.  It was a lot of driving, several hours every day.  It is surprising how tiring sitting behind the wheel can be.

We also sprinkled in a few Carnegie libraries along the way, eight on the way out and four on the way back.  The first was in Petoskey, north of Traverse City, where Hemingway summered as a youth.  It was followed by two in the U.P. (Ironwood and Ishpeming, both still serving as libraries), the vacant former main library in Superior, Wisconsin and two converted libraries in Duluth, Minnesota across from Superior, and  a pair of charming ones in Charon, Nebraska and Lusk, Wyoming.  On the way back we stopped at three in Kansas I hadn’t been to yet—two that were still libraries, one in Peabody, home of long-time friend Laura who now lives in Vermont, and Sterling, which had a small campground we would have stayed at if Janina weren’t alarmed by the ZZ Top-types encamped there, and one that was now the local headquarters for the AFL-CIO in Hutchinson.  We also managed one in Utah, bypassing several that weren’t quite on our route.  The one that wasn’t was in Panguitch, between Bryce and Zion.  It now housed a resale shop and a barber shop, the first of the more than six hundred I have gotten to with a barber  pole out front. 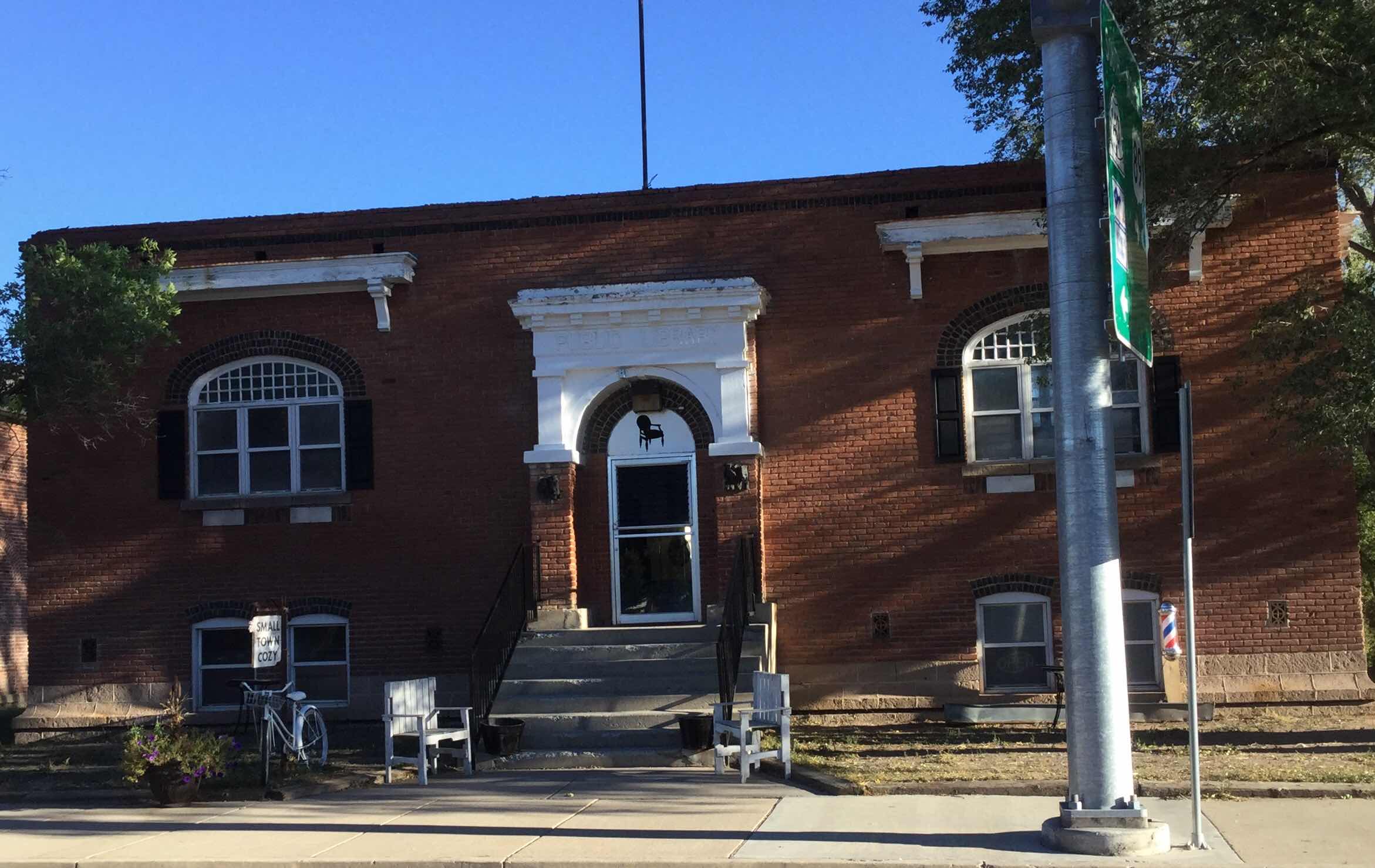 We were barely home a week before I unshackled by legs and allowed them to head out for a several week ride around Indiana to finish off its slate of Carnegies, the most of any state with 167.  Only eighteen have suffered the wrecker’s ball.  Over the years I have gotten to 122 of those still standing, leaving me 27 to go, mostly along its southern and western borders. Somehow though the two in East Chicago had evaded me.  I’d been to the ones in Whiting and Gary, flanking East Chicago, but hadn’t been cognizant of the pair in East Chicago.

Rather than finishing my circuit of Indiana in East Chicago, I decided to head there first and get the urban maelstrom over with.  I set out on Sunday morning when traffic would be at a minimum. There was still a fair amount on 95th street once I reached the city proper after fifteen miles coming in from Countryside out in Chicago’s southwestern suburbs. I was too thrilled at the prospects of a thousand mile ride ahead of me to mind the traffic, knowing that by the end of the day I’d be out in rural America and would be camping off in a forest or a cornfield without having to check in with anyone, camping as I prefer.  Only once were Janina and I able to camp in a National Forest without having to attach a receipt to  a post by our campsite, and it was by far our most idyllic site.  We could thank the campground on the North Rim of the Grand Canyon for being filled and a ranger telling us about camping down a dirt road ten miles out of the park.

There was no sign welcoming me to Indiana or any need to inform me that I was in a different time zone as northern Indiana remains on Central/Chicago time, in contrast to the majority of the rest of the state.  I only knew I was in Indiana when I came upon a huge casino.  It wasn’t too much further that I turned left towards the lake to East Chicago.  The first Carnegie on my route was a branch in a residential neighborhood that was now the East Chicago Academy of Visual and Performing Arts.  The well-maintained brick building had an expansion and a fence around it. 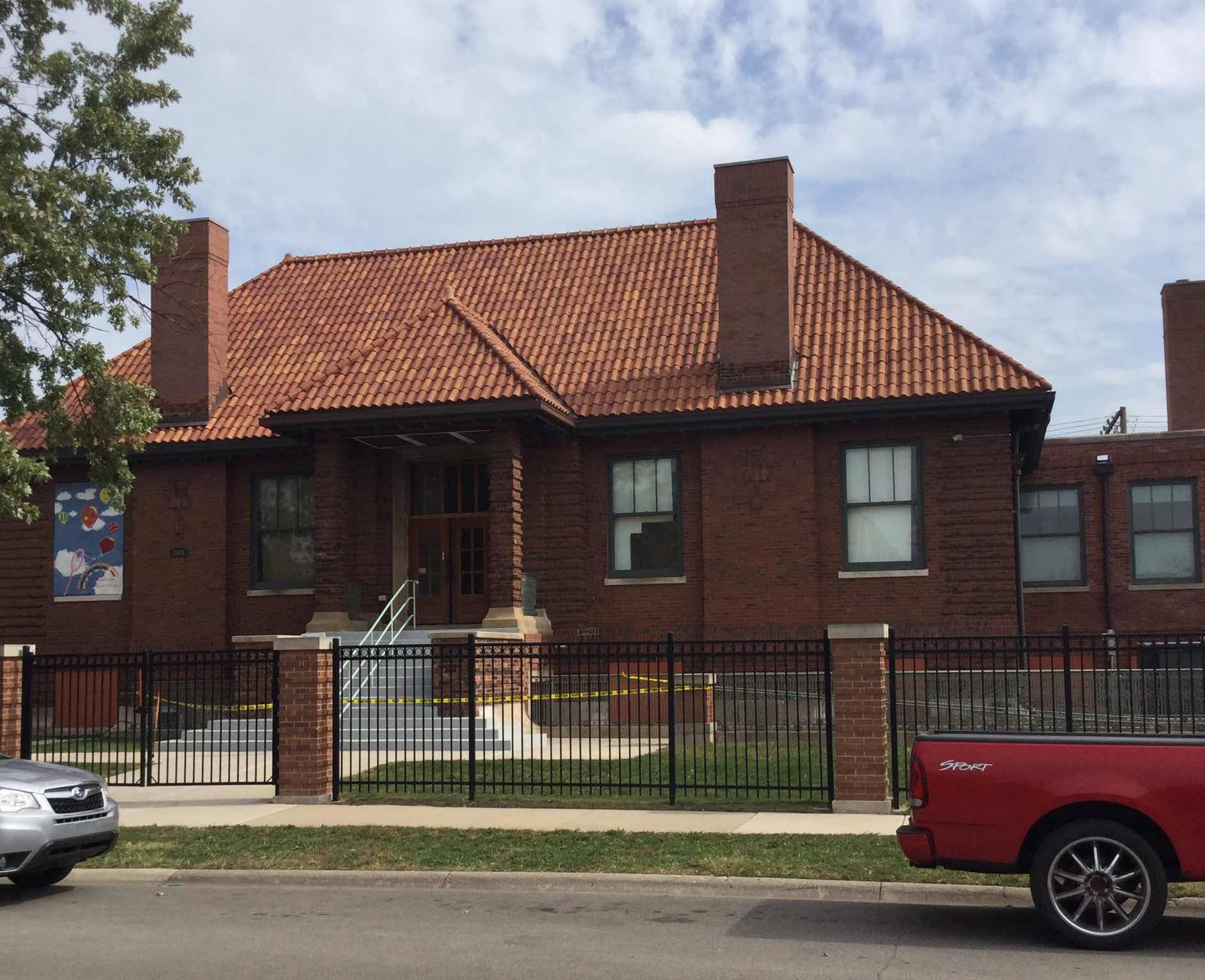 It was three miles from there to the center of East Chicago and its main library.  It was greatly expanded with the original entrance now blocked.  The new grey brick expansion didn’t quite match the original brick, but one had to look closely to notice. 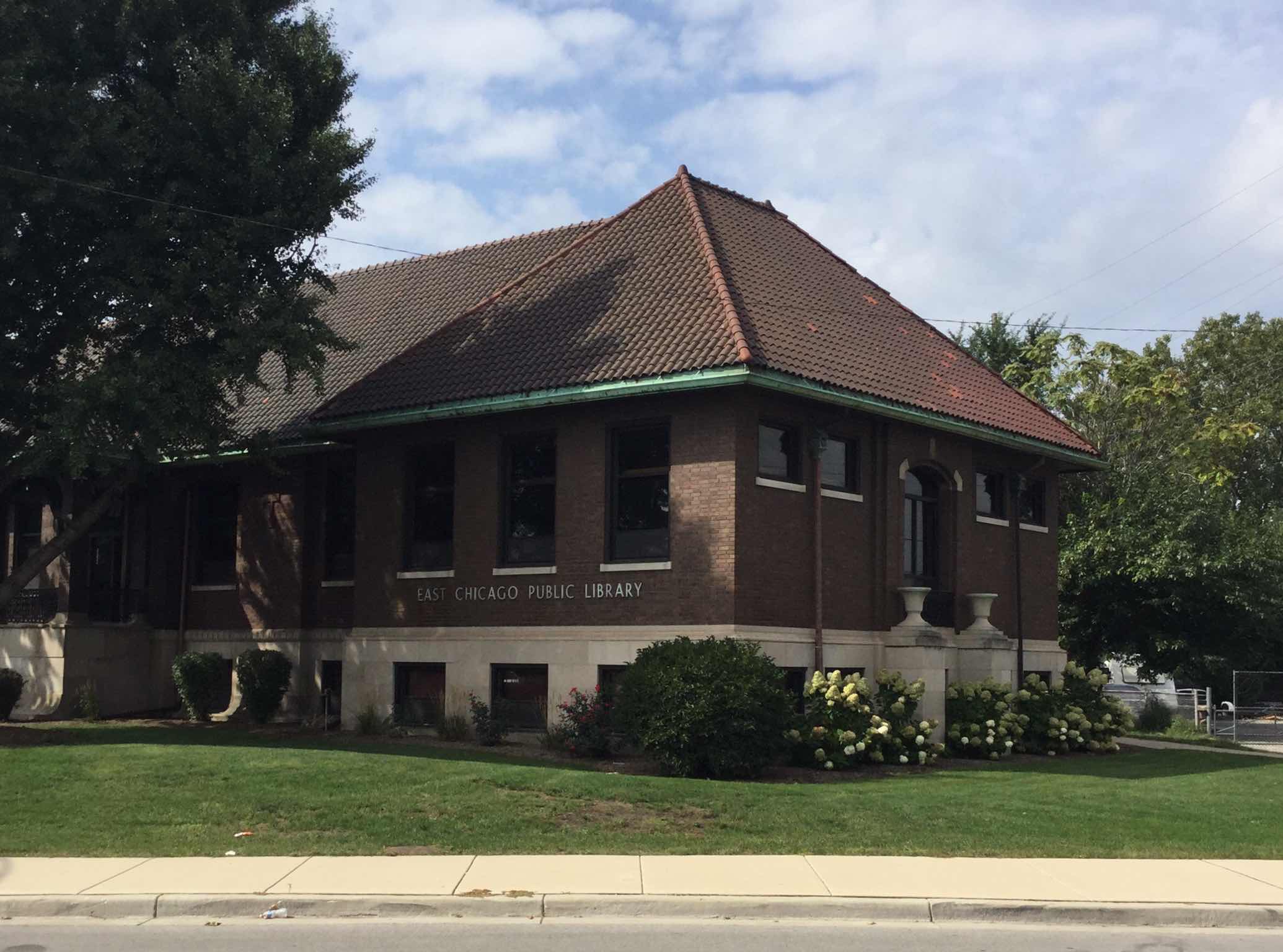 It had been thirty miles to East Chicago and then another twenty miles of urban sprawl back out as I headed south down Indianapolis Boulevard into the hinterlands.  I had gathered enough coins, though no bills, along the road to pay for a one dollar “any-size drink” at a service station by an interstate on-ramp.  Though I had started my ride in tights and several layers on my torso, it had warmed enough to have shed the tights and all but one-layer above to go for the 44-ouncer.  I was seeing almost as many tire weights as coins. 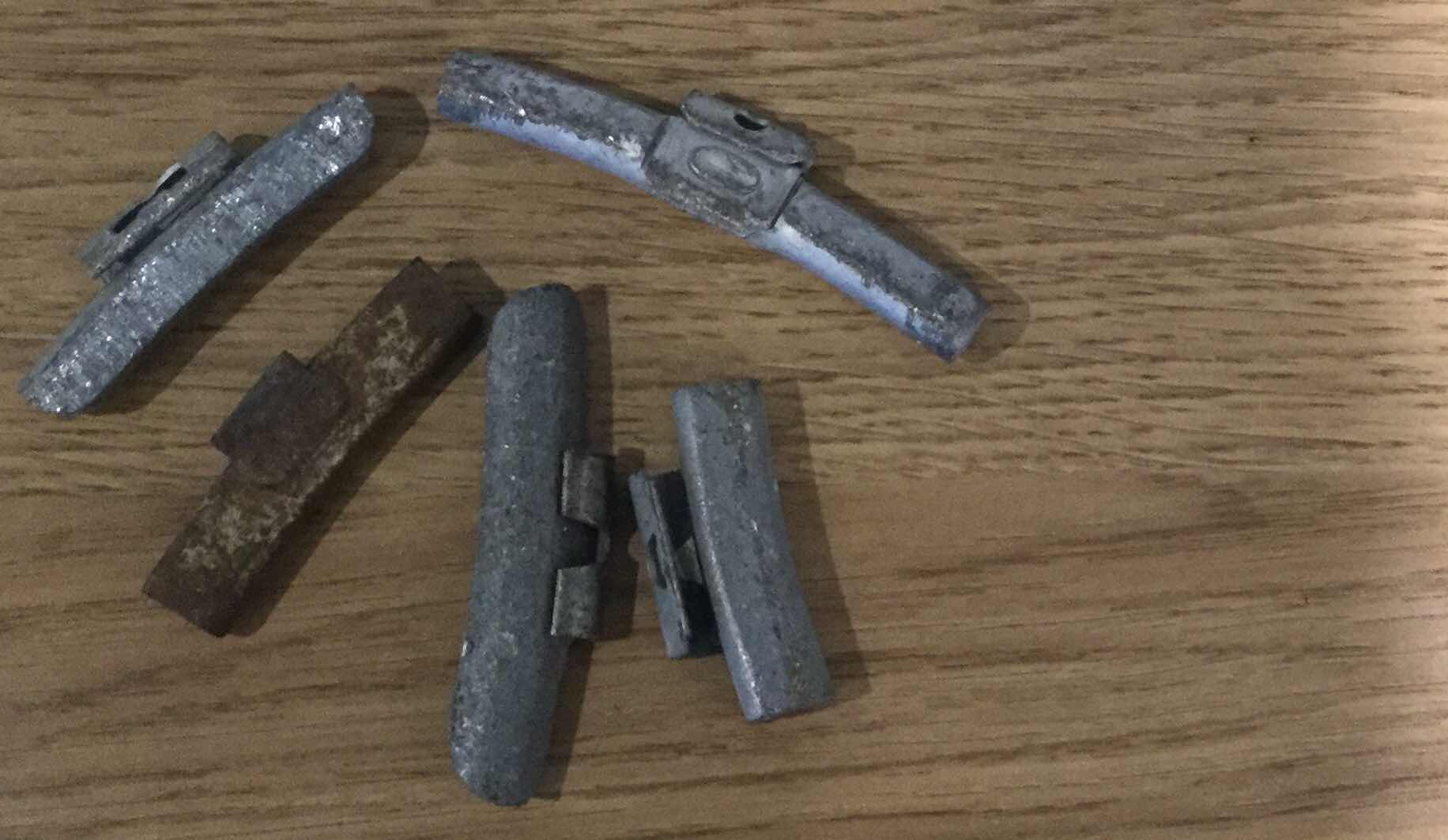 I stooped for them if I were stopped at an intersection, thinking that Dwight might have a use for them on his farm, maybe melting these lead objects down for something as a sculptor friend does.  I was looking forward to staying with him over the Hilly Hundred weekend.  I was also gathering the heavy duty black rubber bungee cords for him and other straps.  The scavenging was great.  I also added a couple of shoe strings to my collection from the stray shoes that dot the roadside.  No license plates yet though.

I supplemented my roadside scavenging with peeking into the dumpsters of several Aldis on my route. They all abounded with slightly blemished pumpkins, just as the Aldis around Janina that had given us a jump on our Halloween decorations. 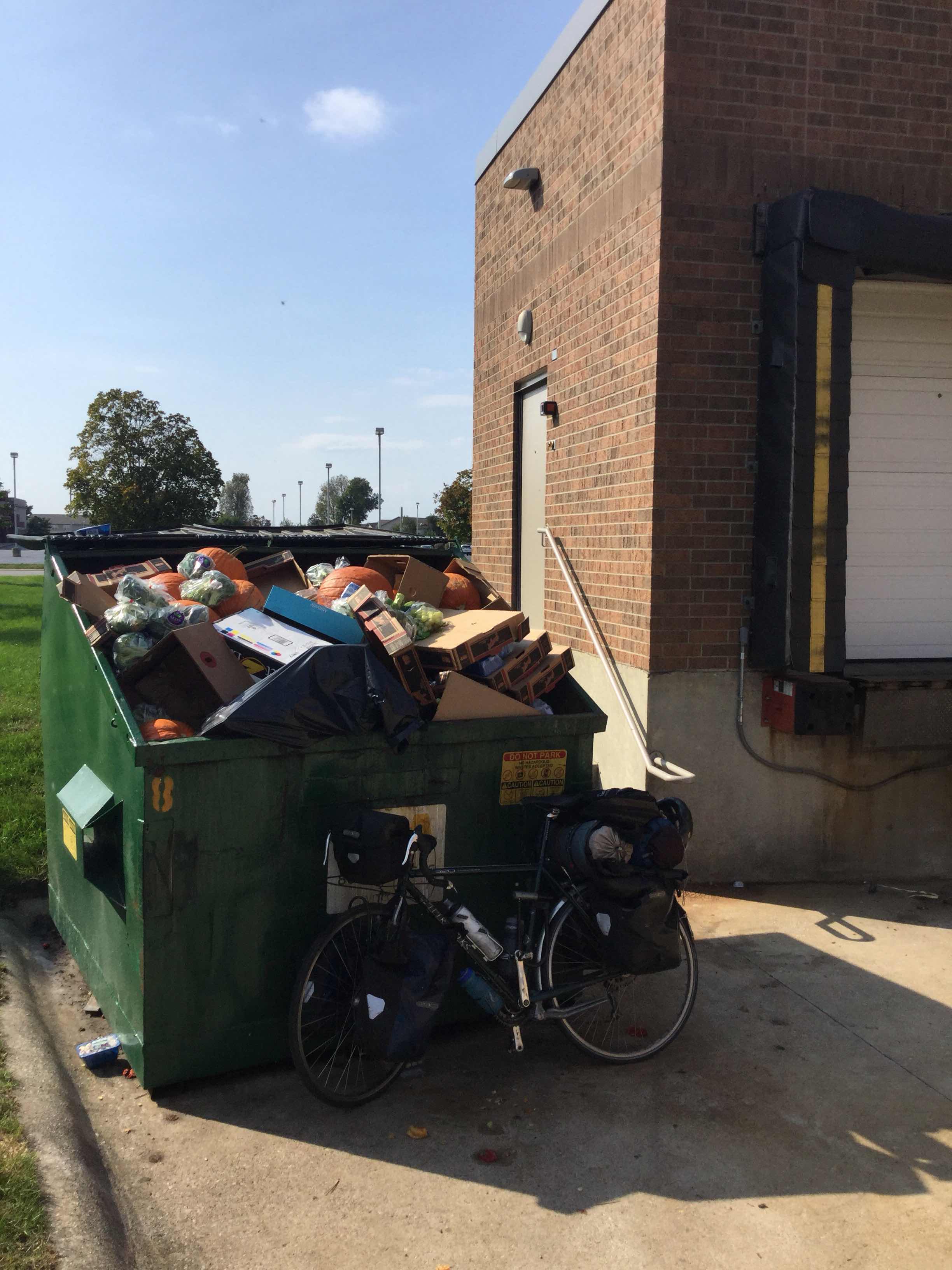 I was loaded with food that Janina had sent me off with (banana bread, macaroni, oatmeal), but I had room for a few bananas and two packages of slightly damaged graham crackers and, best of all, a gallon of cider, replacing the water in my bottles.

Two Carnegies awaited me the next day in Kentland and Earl Park.  Kentland (A Wonderful Place to Call Home) was a thriving town of nearly 2,000 residents, big enough to have a McDonalds and to warrant a significant addition to its library that rendered its original entrance into an emergency exit. 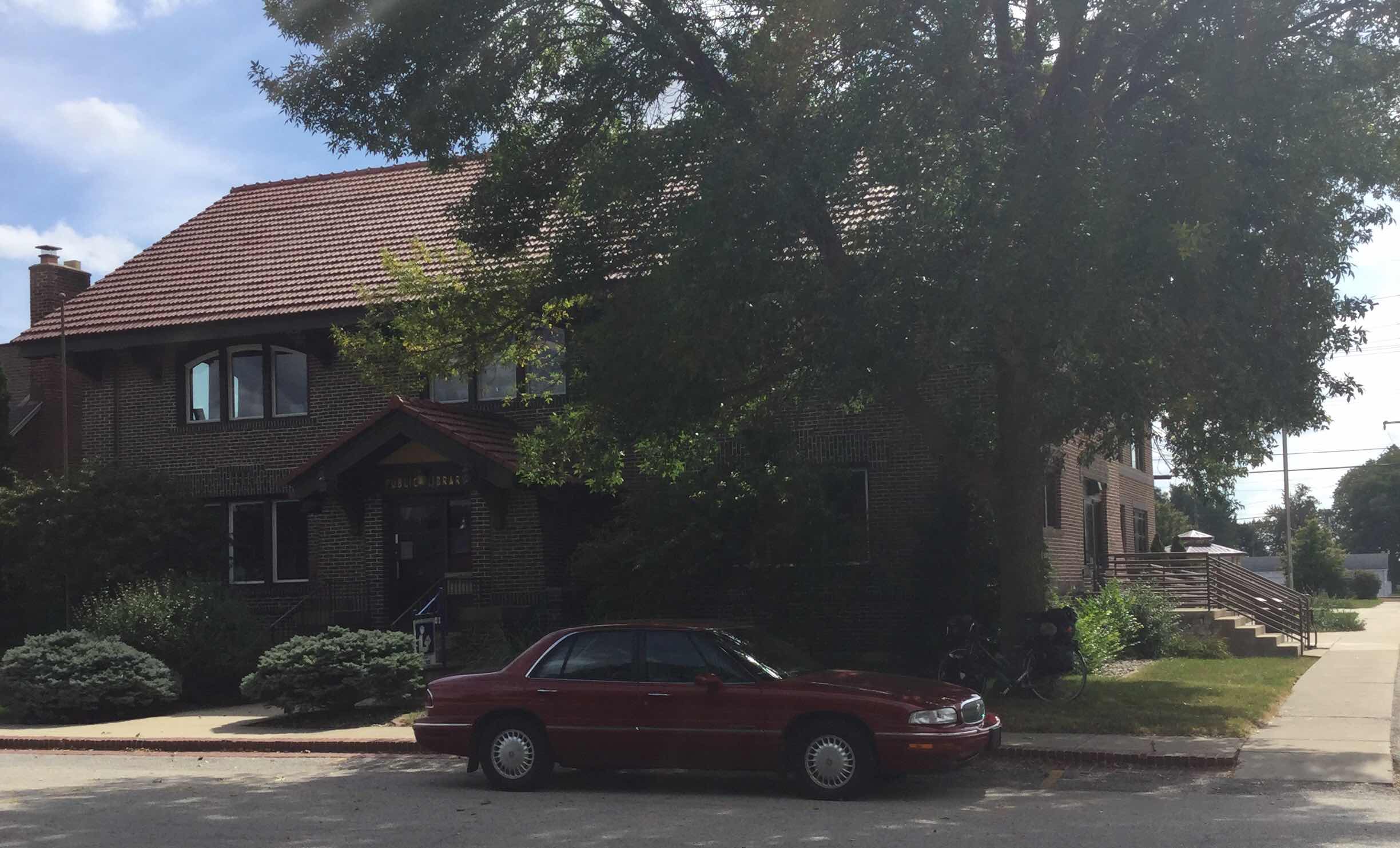 Earl Park with a declining population of just 348, almost half of what it was when the library was built in 1913, had been spared of an expansion.  It was a town that would never have had a library without Carnegie.  Even though it’s population had never exceeded 1,000, it could lay claim to at least one citizen of significance—Matilda Moisant, the second woman in the United States to get a pilot’s license in 1911, just after her friend Harriet Quimby. 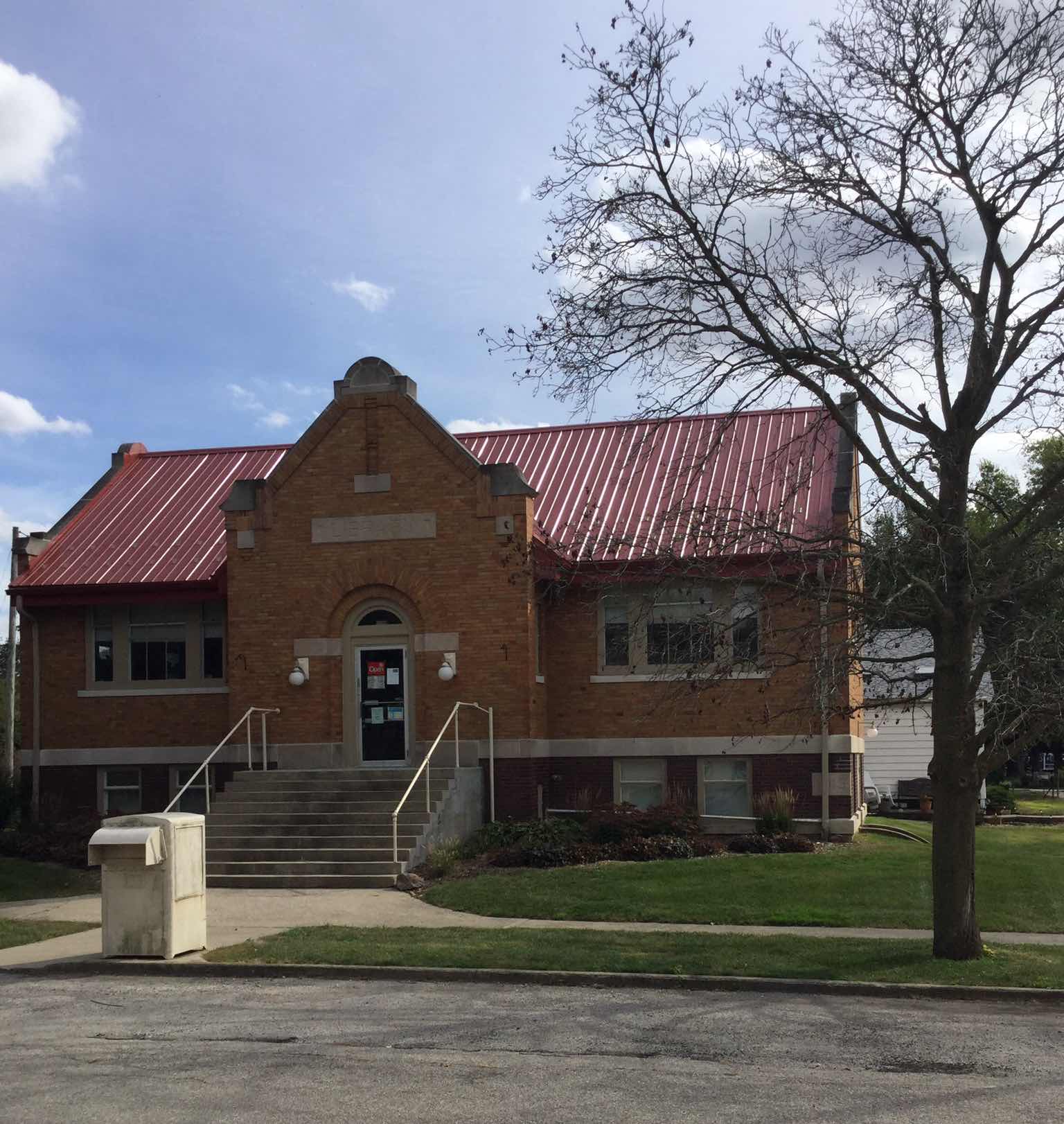 Unlike Kentland, Carnegie’s portrait hung in a position of prominence over the circulation desk.  The librarian said when her grand children first visited the library they asked, “Who is that old man?”  I was there late in the afternoon anxious to use its WiFi to activate my iPad to see how the Cubs had fared in their playoff game against Milwaukee.  The password for the WiFi was donkey13.  The librarian had no idea why.  But it didn’t matter, as the WiFi wasn’t functioning.  I had to resort to one of the two regular computers. In many small town libraries they’d be packed by school kids, but the librarian said there aren’t many children in Earl City.  Her primary clients are farmers checking out audio books to listen to as they work in their fields.  She’s an avid user too, as she recently moved and has a 90-minute commute.

Beyond Earl Park I passed through a vast wind farm, the first in Indiana, established in 2010.  I ended up in a corn field later that night that was part of the agriculture school at Purdue.  All the patches of forest, as I had camped in the night before, were too near farmsteads.  I was leery of someone seeing me disappearing into the forest and calling the police.  I was lucky to find a patch of grass for my tent. 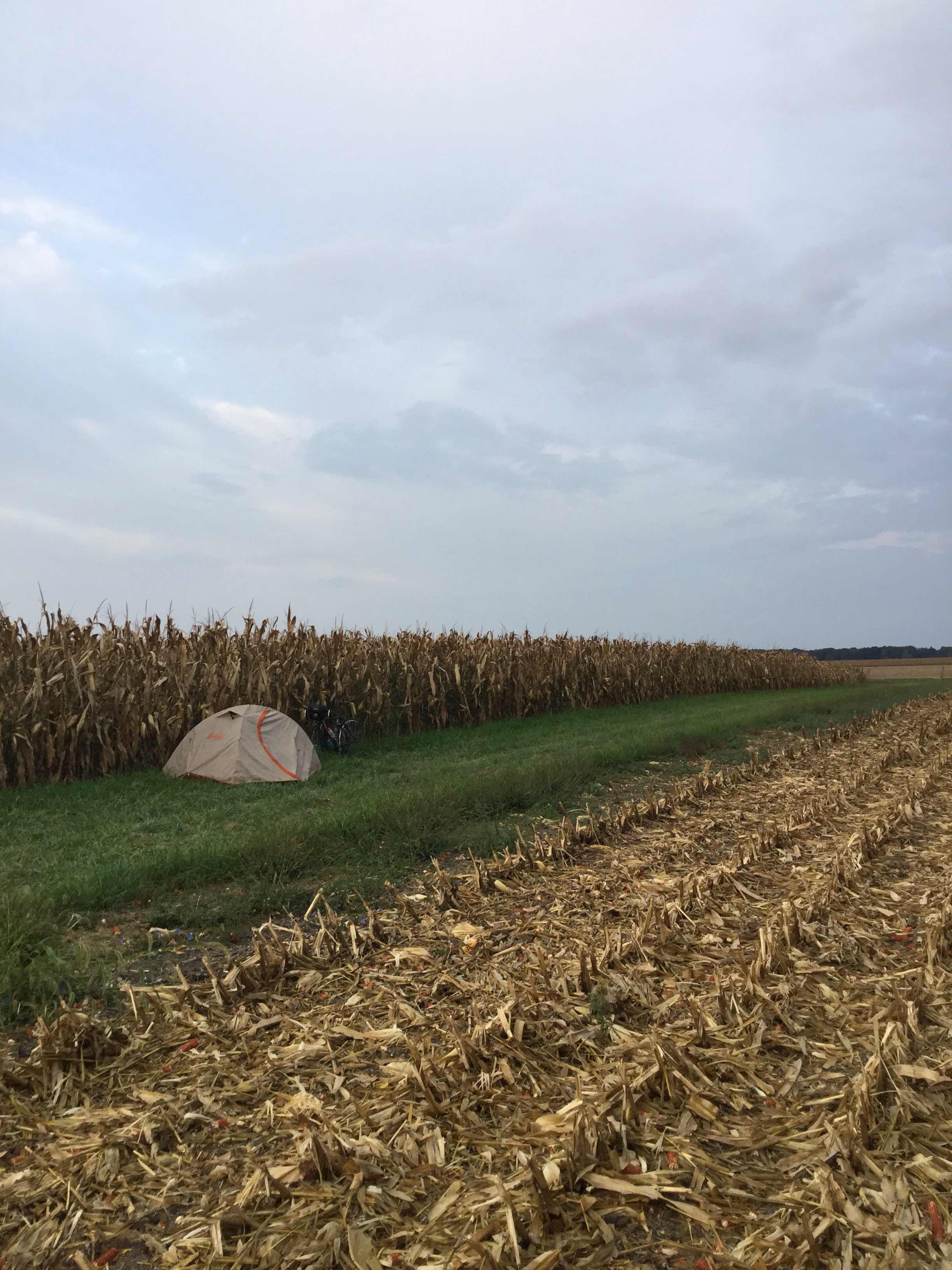 Posted by george christensen at 10:09 AM

Glad to read of your continuing adventures, George! Bon voyage! From the True Heartland!

FYI, your "ZZ Top type" comment cracked me up...and if there were a request line for the local classic rock station here, I'd have dedicated my request of "Jesus Just Left Chicago" in your honor! ;0)>>>

Glad to see you making use of perfectly good food thrown in the bin George. My Greek friend here in Sydney who you’ve met has become an avid diver and hardly buys vegetables and fruit any more such is the bounty in Uber wealthy inner Sydney.

I have bicycle-camped in the middle of that wind farm near Kentland. I remember hearing the swish-swish-swish all night. The farm goes on for miles.