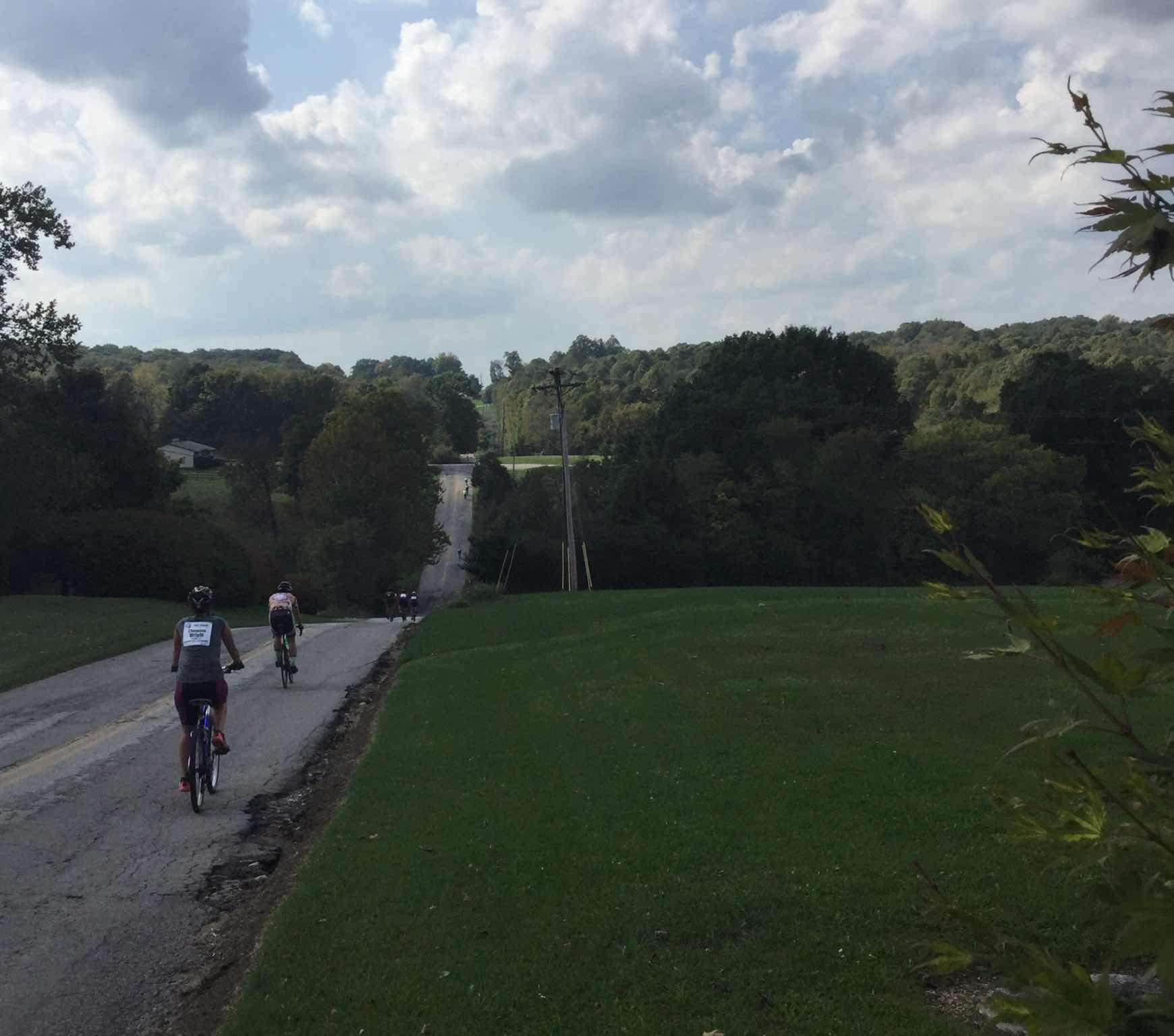 The day before I arrived in Bloomington for the 51st annual Hilly Hundred weekend of back-to-back 50-mile days of killer hills I noticed on the event’s website that volunteers were still being solicited.  Having ridden The Hilly several times over the years, I was willing to sacrifice some riding time to hand out apple cider or ice cream bars or some other task for the opportunity of a fuller immersion into the event and also to earn privileges I haven’t enjoyed in the past.

It was a most inspired choice, as I was assigned the simple task of guarding one of the doors leading to the high school gymnasium where registration took place Friday evening. I just had to contribute five hours before the ride began and then I was a full-fledged rider, a $90 value, plus I earned vouchers for breakfast the next two days and dinner that night and the next as well as camping privileges, plus a Hilly Helper t-shirt.  Volunteers, or Helpers, as they are known, are exceptionally well compensated, and fed, as the rider’s pass includes a generous amount of food, including pumpkin donuts, at the three rest stops on each day’s ride. 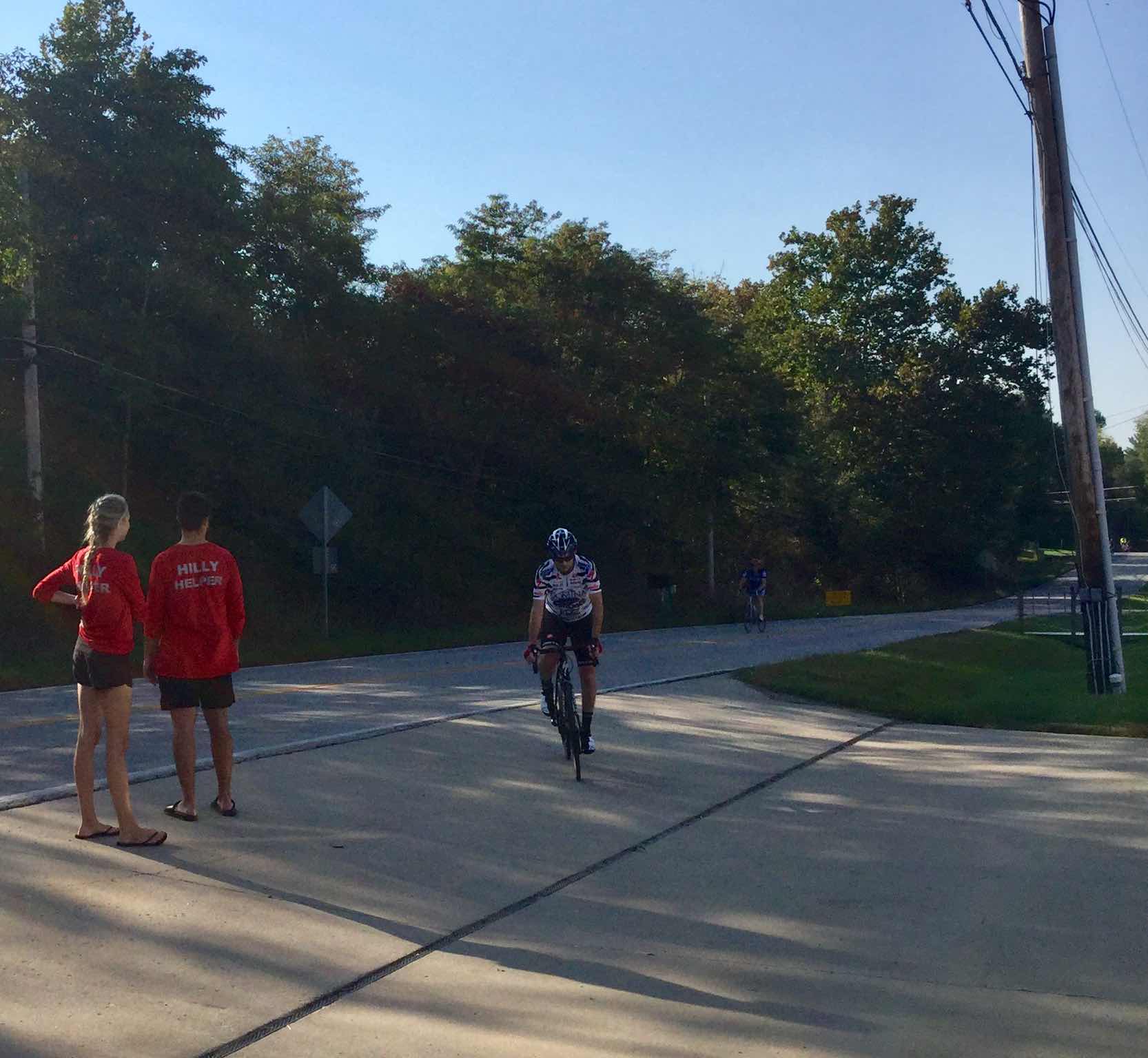 The buffet breakfast was a feast—oatmeal, hot cakes, eggs, sausage, yogurt, toast, a banana, apple sauce and coffee, milk and orange juice—enough calories to get one through a mountain stage of The Tour.  There was so much food available all day that I felt as if I were back on the Queen Mary feeling the obligation to keep stuffing myself.  For the first time on a visit to Dwight I had extra food for him rather than vice versa.

As good as the food feature was the opportunity to gain the friendship of other Helpers, a most dedicated and devoted crew.  One was a father of 22-year old quintuplets who comes down from Kokomo to participate.  I told him I had a small sense of what having quintuplets must have been like, as Janina has five cats running around our abode after taking on her daughter’s three cats from Beirut, as she just moved back to Manhattan and at present is living in a space that can’t accommodate even a single cat.  Raising quintuplets had been fun my new friend said, and it hadn’t bankrupted him as he had a good job as an engineer in the automotive industry.

His duties at the Hilly were to take photographs.  One he took of me over breakfast turned up on the screen preceding Saturday evening’s variety show.  He didn’t mind riding just one day and photographing on the other. He wasn’t an ardent cyclist, not even knowing Jan Ullrich,  the lone German winner of The Tour de France in 1997, even though he was of German heritage and had the same first name, but he greatly enjoyed riding the Hilly and being part of this cycling community.

One of  the guys I shared door duty with wasn’t riding at all, as he had an emergency order for his woodworking business and had to work all weekend.  He could have bowed out of his volunteer duties, but cared enough about The Hilly, that he still wanted to spend Friday evening at the door getting a dose of Hilly enthusiasm from those arriving from all over, most of whom had been doing it for years.  Not a one complained to us about having to watch the safety video once again before being allowed to pick up their registration materials.  All were in good spirits, even with the unseasonably and unreasonably hot temperatures that reached 90 on Sunday.  There were fluids aplenty at the rest stops—apple cider, as well as water dispensed from a truck. 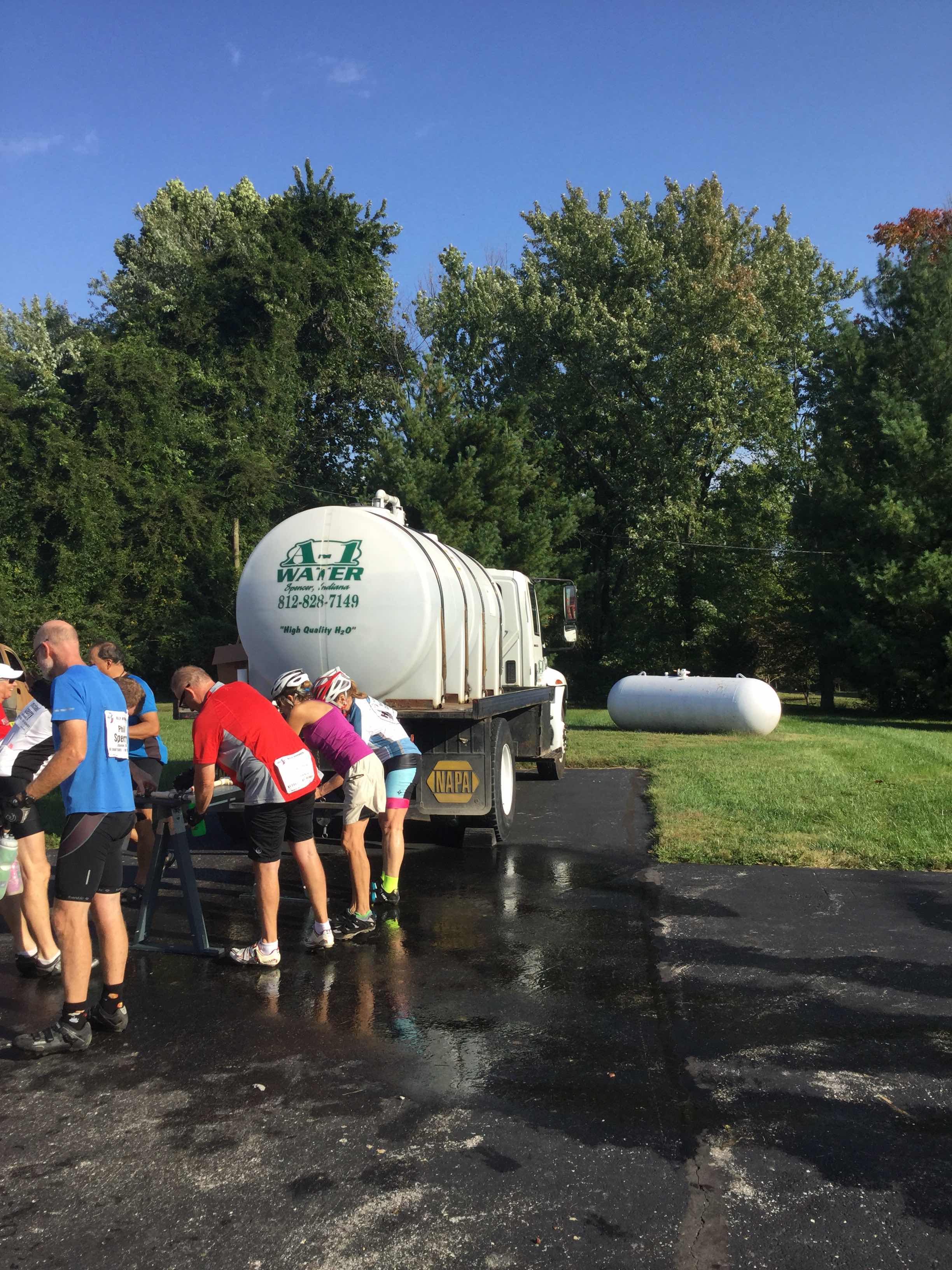 The shady stretches were welcome corridors of relative cool. 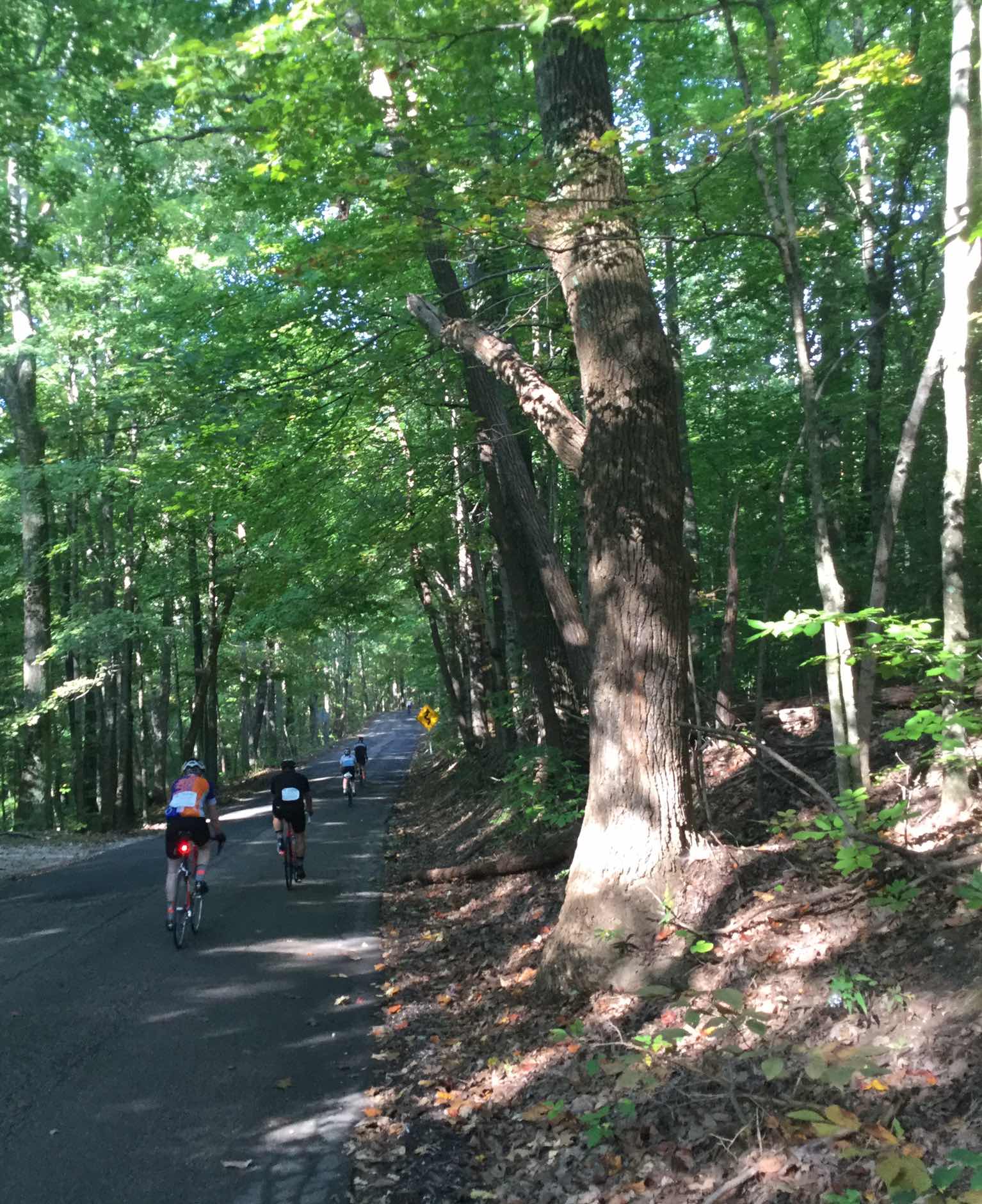 The quality of the riders has evolved over the years from the causal to the hard corps.  The ride has lost its aura as a must-do happening for anyone in Bloomington and cyclists in the Midwest to participate in to an elitist, almost corporate event for those with excess disposable income.  It would need to cut its entry fee by half or two-thirds to once again appeal to the common cyclist who helped make it a rollicking good time.  Sometime-cyclists don’t care to pay nearly $100 for a weekend of pushing their bikes up hills despite the badge of honor they earned by conquering the hills in some manner or another.

There was a high level of fitness among the current riders.  In the past every hill had a steady procession of people walking their bikes.  Now only a handful walk and mostly just on the extreme climbs such as the notorious 24-per cent Mount Tabor, which came towards the end of Sunday’s ride.  The vast majority of bikes were sleek, super-lightweight, high-end thoroughbreds, all with clip-in pedals.  Not even one in a hundred of the bikes went back to the toeclip era, which in  the not so distant past was the indication of a serious cyclist.  Now the site of a toe strap dangling off a pedal is as jarring to the eye as an untucked shirt at a wedding. 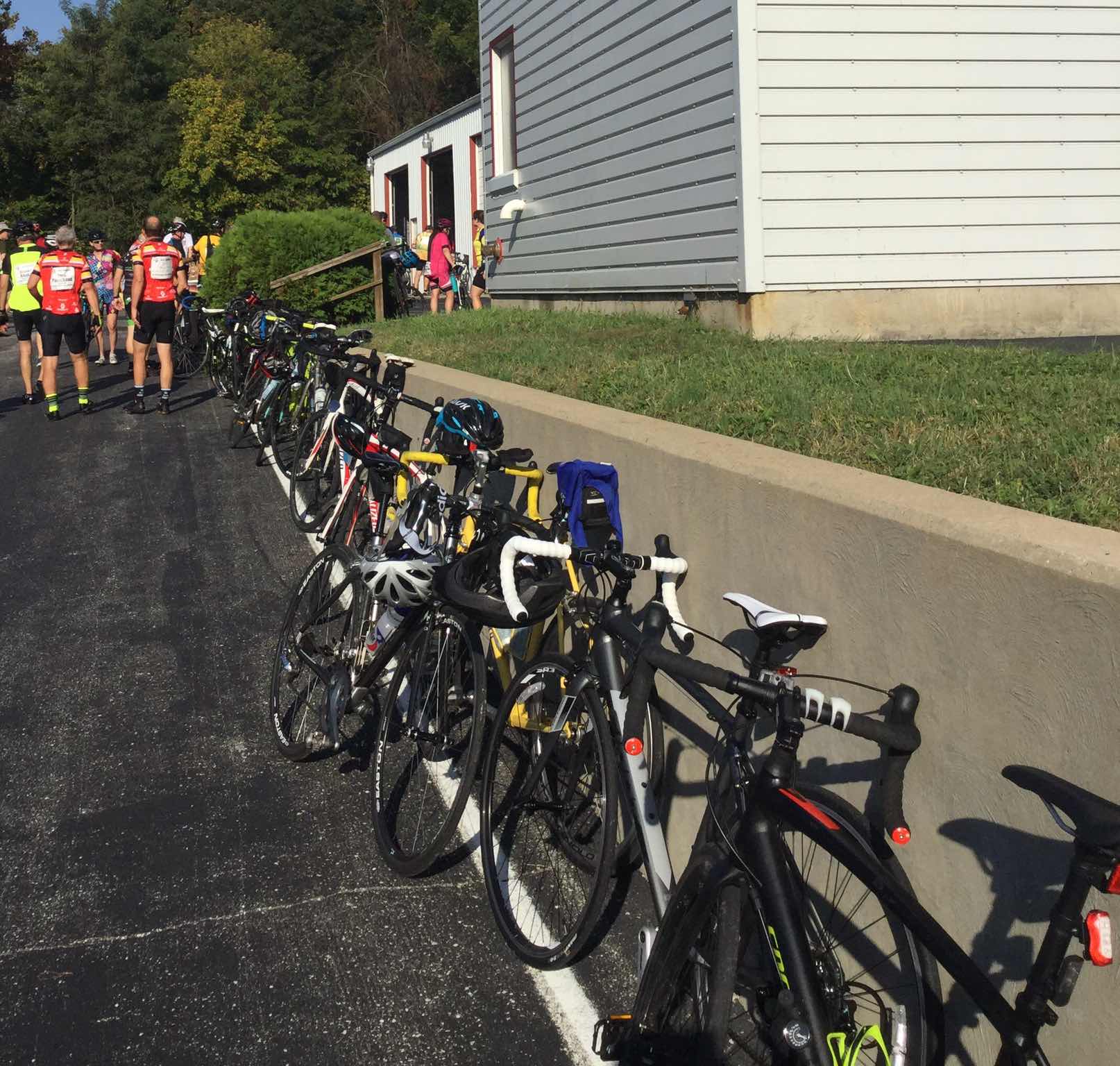 Even rarer than toe clips were racks.  I was riding with clip-in pedals, but I was among the tiny
minority on a bike capable of carrying gear and serving as a beast of burden.  And not even one in ten of us with racks were putting them to use carrying a pannier. I was the anomaly of anomalies. I didn’t care to be without my rain coat or tools or book or Tupperware bowl for extra food and also carrying capacity for what I might find along the route—a license plate for Dwight, and three water bottles, including a deluxe Camelbak insulated bottle, as I scavenged last year.  And I couldn’t be without my handlebar bag either, another glaring encumberment, stocked with snacks to nibble.

I was delighted to spot a sturdy, uniquely designed rack on a young woman’s bike.  I resisted complimenting her on her rack knowing the temper of the times and with Kavanaugh at that very moment being voted on by the Senate.

I was content to ride at a steady, leisurely pace, slower than most, allowing many to pass me, who seemed to be more interested in getting in a hard training ride than having a sociable time. I’d occasionally latch on to a pace line for a few miles and fly by all those who had previously passed me, or flex my muscles and gallop up a climb, as if I were doing intervals, but mostly I saved myself for the days ahead of circling around Indiana gathering Carnegies.  I did manage a couple of conversations, but mostly I just caught fragments of those zipping by if they weren’t parroting the “On your left” mantra they were programmed to spit out, along with “Car back” and “Car up.”

I took heed when I heard someone say, “I wiped out my truck on this bend when I was at IU.”  I took heart when I heard someone say, “You ought to become a Bears fan.  They’re going to be great this year.”  I didn’t know how to react to the comment, “You can hate Trump or you can love Trump, but you got to admit he has the economy humming.”  And there was the usual bike talk—“I should have been riding my gravel bike”...”When my heart monitor gets to a certain point, I get off and walk”...“I’ve been a bike addict since I was a kid.”

A common refrain was the complaint over the declining number of participants.  There used to be five or six thousand. Last year, despite its being the 50th anniversary, there were only 2,000 and this year even less, some saying the smallest number in years raising fears that this could be the last one.  Someone speculated that there were 500 less registered riders than anticipated, a loss of $50,000. There are a considerable number of interlopers, maybe one in five, riding unregistered, obvious without a tag on their back, many of them students from Indiana University wearing jerseys betraying their affiliation. 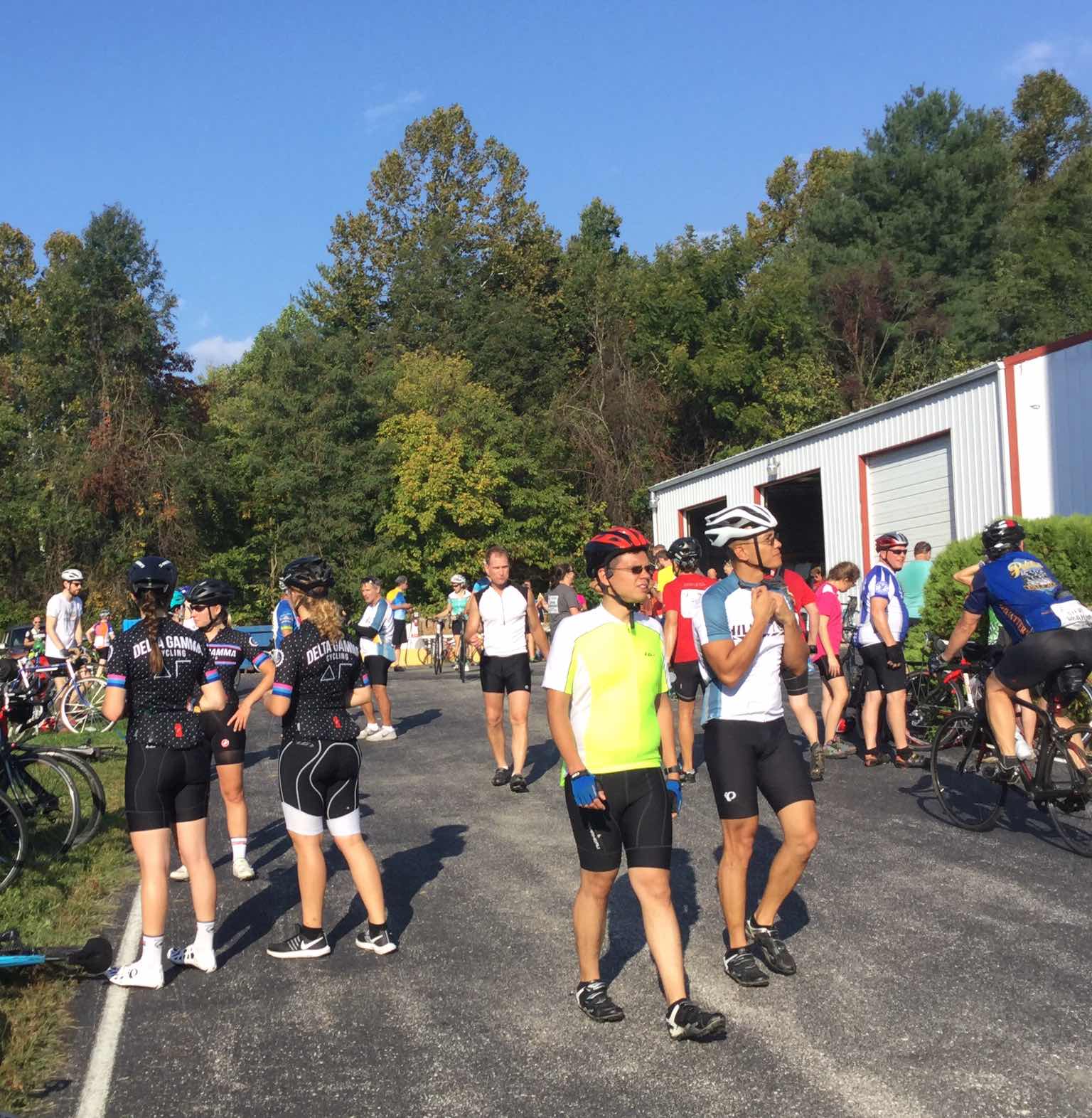 Hoosier-oriented jerseys predominated.  Most were bland and generic stirring no recognition or interest.  If this were France there would have been a variety of Tour team jerseys from the past and present and polka dot jerseys and others that gave its bearer a sense of identity and endorsement of their pleasure and would have given me a jolt of delight.  Rare did I spot one here that made me want to give a thumbs up. 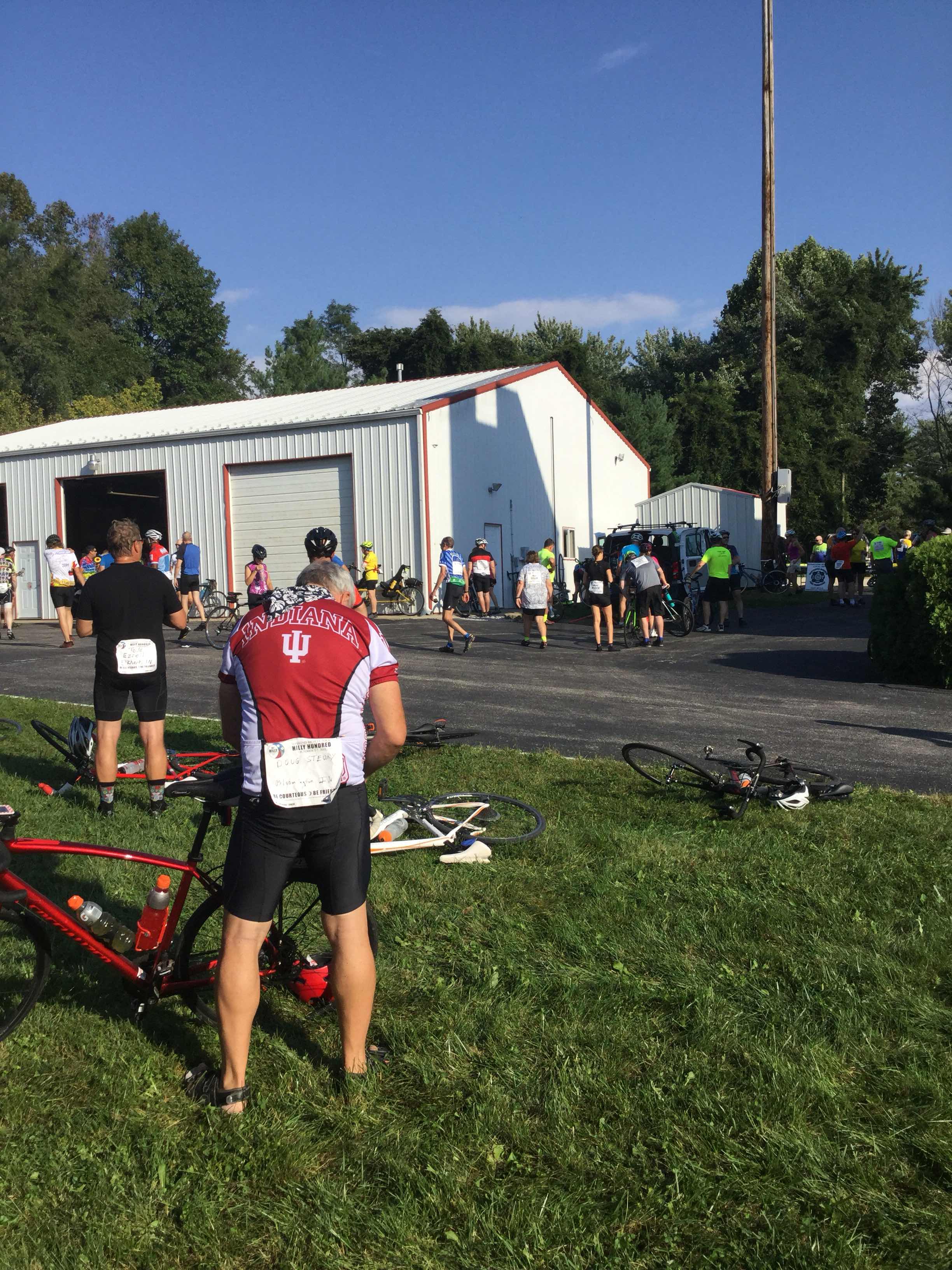 I wore my usual touring polyester-blend shirt the first day and then my Garmin jersey the next, to see if it would spark conversation.  Not a soul was moved to comment at the site of the jersey of the American team that won the team award at The Tour de France ten years ago and had a pair of fourth place finishes around that time. With my name pinned on my back, I  received a random, “How’s it going George,” from someone riding past who never slowed to find out.

Despite the minimal conviviality, it was still a pleasure to be part of the ride.  It is very tempting to add it to my calendar of annual events along with Cannes and The Tour de France and Telluride and Traverse City, if only as an opportunity to catch up with Dwight. Even though I camped on his farm five miles from the starting point,  we didn’t have much time together as he was attending the annual Heartwood  environmental conference south of Bloomington.  This year was its last, so he’ll be free to ride The Hilly next year once again, all the more reason to return.

Posted by george christensen at 11:06 AM

I love that you're gallivanting around my ol' stomping grounds. I grew up in Indy, and I've ridden bandit in the Hilly and many mountain bike trails in that area. Enjoy them Hoosier hills!