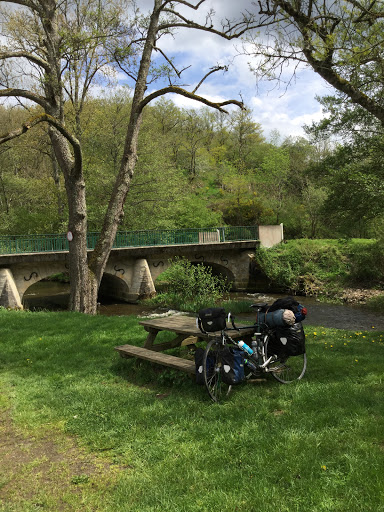 This is the fifteenth time I’ve made the ride from Paris to Cannes.  I’ve varied my route every year always excited about what new discoveries I’ll make. I didn’t have to wait long, as my first came less than ten miles into my ride when I passed through the village of  Coupvray, and unexpectedly came upon the Louis Braille Museum.  It was in the home of the man, or boy, who developed the Braille system.  Braille was just fifteen when he devised the system of upraised dots in 1824 while attending a school for the blind in Paris.  He was frustrated by the present method of tracing one’s fingers over upraised letters.  It was particularly difficult to write in such a manner.

As always in France, one never knows when one will come upon a museum or monument to someone or something of significance, one of the many joys of traveling in France.  My trip was off to a great start, after fearing it was in jeopardy the day before when I received an email from Air France informing me my flight had been cancelled due to striking pilots.  When I called Air France to reschedule my flight I was relieved to learn the strike was presently effecting only ten per cent of flights and that I could take a flight through Detroit on the day of my original flight, delaying my arrival in Paris just three hours, not enough to cause me to be late to Cannes, as I’d allowed ten days to bike the 650 miles.

But I received another fright when I checked in with Delta for my connecting flight and was asked by the young clerk, who looked more suited to be working at a Walmart than an airline check-in counter,  if I had a visa.  I told her one didn’t need a visa for France.  She said that was only the case if one were returning within ninety days and my return flight was ninety-six days away.  Usually I am gone just around ninety days, but Cannes was early this year and The Tour de France a week later than usual due to the World Cup.
I was certain there were years when I had stayed away more than ninety days, so asked, "Are you sure," hoping this wasn’t some new Trumpian regulation to limit Americans from spending money overseas.  She dabbled away at her computer and then handed me my seat assignments without saying anything other than asking me for my credit card to pay for my bike, evidently not wishing to acknowledge she had been misinformed.  Fortunately, the bike wasn’t an issue, as I had noticed too late that the Air France website stated that under certain circumstances one had to alert the airline forty-eight hours before flying if one were flying with a bike. It seemed unimaginable to the clerk that one would be going away for such an extended period.  She wanted to know if I would be staying in a hotel every night knowing how expensive that could be.
I was glad to be spared the seeming 90-day technicality, and the 48-hour advance notice technicality, but not the technicality from the crew inspecting my bike box and duffle bag that one is not allowed access to one’s luggage after turning it over to the airline.  I realized I had neglected to put an ID tag on my duffle bag and rushed after it as it was being wheeled to the special X-ray machines.  As the porter was unloading my gear for the inspectors, I tried to attach the tag to my duffle, but one of the TSA inspectors gruffly halted me, as if I were trying to thwart his inspection, and said he’d put the tag on for me.
I was surprised when I joined the long line of passengers for the TSA inspection that I was waved into the short line for VIPs.  I checked my ticket and noticed I had been upgraded to business class for my trans-Atlantic flight after the short one-hour hop to Detroit.  That was fine compensation for being rescheduled on a non-direct flight.  Except before I boarded that second flight I was told that my seat assignment had been changed and I was back with the commoners.  At least the flight wasn’t full and I had an empty seat beside me that I could somewhat stretch out on after dinner on the relatively short six-and-a-half hour flight.
I had just one more concern--would my bike survive the extra handling of two flights.  It arrived in tact, along with my duffle, at the oversized counter, although the French give extra large items a less insulting, more dignified name--"baggage hors format."  It harkens to the French term for the toughest of climbs in The Tour de France of "hors categorie"--beyond category.  The French also have a flattering, rather than denigrating, term for "wide loads" on the road of oversized trucks--"convoi exceptionnel."  They probably have a term for the obese that doesn’t impugn, perhaps “corps exceptionnel.”
Not that the French are adverse to insult.  A couple days into my travels when I was deep into La France Profonde, I paused along the road at a driveway to a house to shed my windbreaker.  As I was stuffing it into a pannier an amiable older gentleman in a blue workman’s smock ambled over and asked if I needed to rest.  I told him that I just needed to take off my jacket.  He asked where I was from.  At the mention of Chicago he blurted “Al Capone” and cradled his arms into a machine gun and slowly panned from side to side.

“No, no,” I replied.  “It’s now known as the home of Michael Jordan and Obama.”
He said he had friends who lived in Harrisburg, Pennsylvania.  I asked if he had ever visited them.

“No, I’ve never been to America,” he proudly replied, “There’s nothing good to eat there.  I’m 75 years old and I’ve never had a coca-cola or eaten at McDonald’s.  I have a garden and eat as much as I can from it.”

“Yes indeed.  I bicycled 2,000 kilometers from here to the Camino de Santiago across Spain.  And as you probably know we have the greatest bike race in the world and it’s free.  You can stand along the road and watch it go by.  In America nothing is free.  It’s money, money, money.”

My country may have been an affront to him, but not me as an individual.  “You don’t look like an American,” he said.  “You’re too skinny. If I weren’t in the middle of a job I’d get on my bike and ride along with you for twenty kilometers or so.  I could show you a better road than what you’re on.”

I asked him if he at least liked American movies.  “They’re the worst!”   he erupted.  “They’re brainless, full of nothing but sex and violence.”

It’d been a long time since I’d encountered such an old-school, free-talking Frenchman, a charming stereotype that is not all that common, or at least so forthright. I couldn’t imagine an American going off on a French visitor in such a manner, not even the current resident of the White House in a one on one encounter, but he was a personification of French pride and superiority.  I couldn’t even get him to criticize his own president.  When I asked if he thought Macron was doing a good job, he replied, “Half and half” as he twisted a hand back and forth.  He, of course, thought Trump was an abomination.

My first destination on my way to Cannes was the small town of Cuy just north of Sens and about one hundred miles south of Paris.  I had recently learned from a new book about the inaugural Tour de France in 1903 by Peter Cossins that the rider who finished second in the first two editions of The Race, Lucien Pothier, was buried there and that the town plaza had been named for him.  Years ago I had  visited the grave of Maurice Garin, the winner, but knew nothing of Pothier.  The plaque overlooking Cuy’s modest plaza in front of a school said nothing of him coming in second, just that he was a “pioneer of The Tour de France.”  Perhaps it wished to avoid the issue that he along with the first four finishers of the 1904 Tour were all disqualified for cheating, including taking a train. 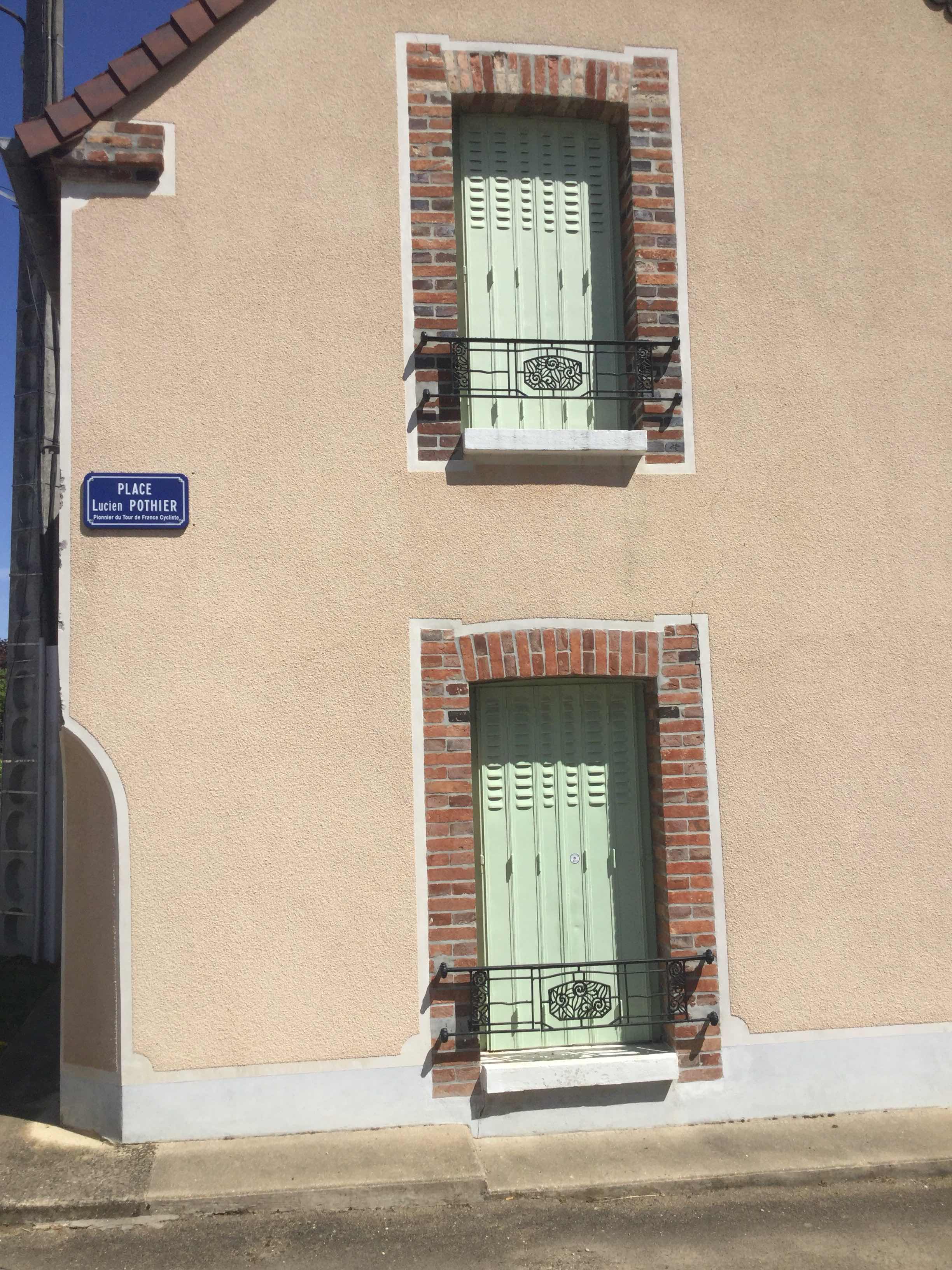 His grave was equally modest, making no reference to his cycling exploits.  It was distinguished by being the only red-hued tomb among the rows of grey stone. 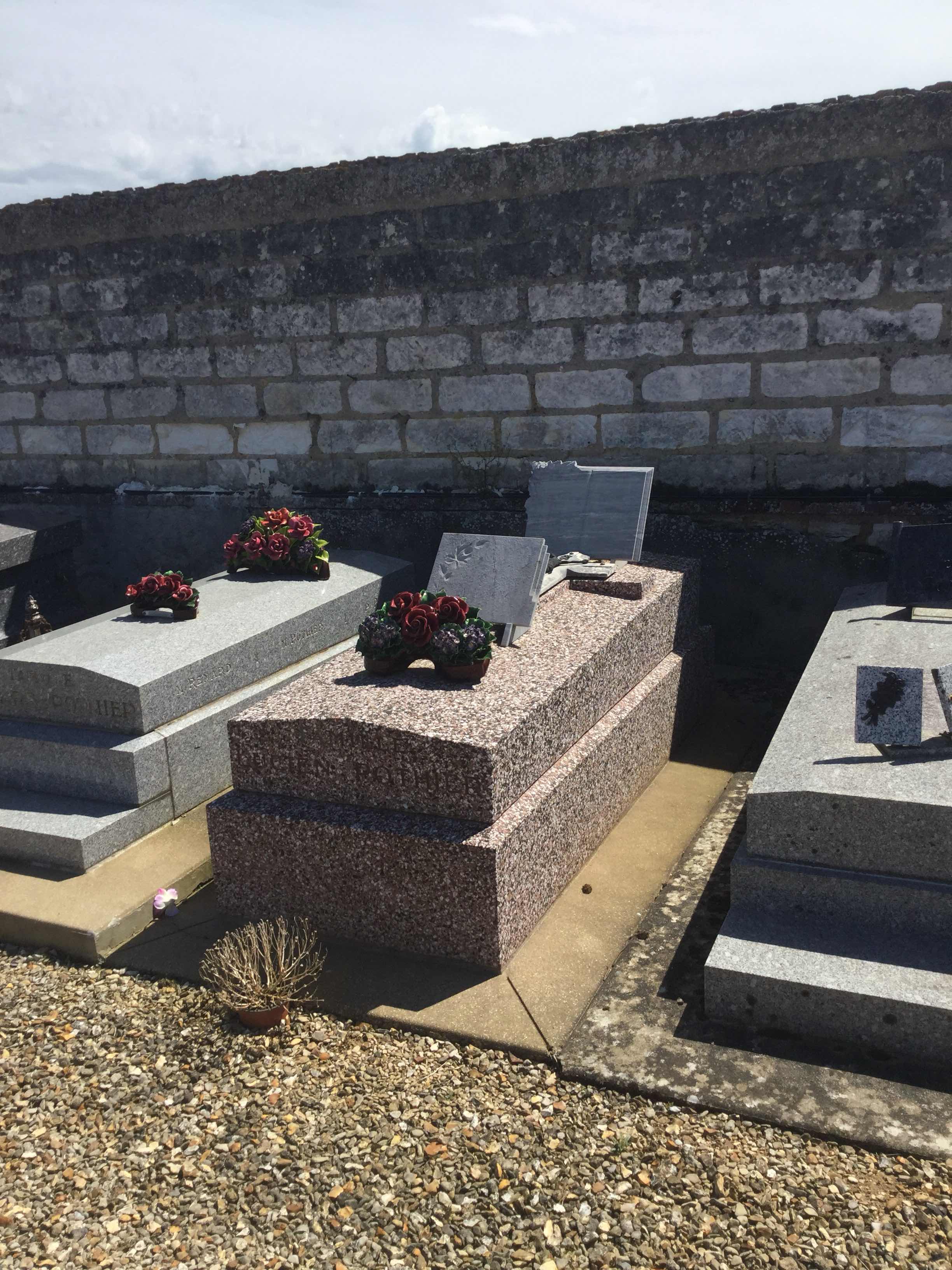 From Cuy I continued south through up and down terrain while angling east towards the Rhône, which I would follow to Valence and Saint-Paul Trois-Chateaux, the only two Ville Étapes on this year’s Tour route that I could intersect on my way to Cannes.  They had both previously served as host cities for The Tour in the recent past since I began following The Race.  But I am always curious to see what early preparations they have made for The Tour’s arrival in a little more than two months.
As I descended to Macon I came upon vineyards for the first time indicating I had reached the warmer, temperate half of France.  The tourist office in Macon offered a 92-page booklet listing eight circuits of between 15 and 55 miles linking the many vineyards in the region.  Wine may be emblematic of France,  but my favored beverage is menthe á  l’eau, the dazzlingly refreshing  drink one makes by adding mint syrup to water.  It stimulates nearly every taste bud in my mouth and down my throat, many that I forgot existed, and keeps them in a state of delighted exaltation unlike any other food or beverage. That syrup was the first thing I added to my provisions when I came upon a supermarket.   750 ml bottle can keep my water bottle full of mint drink for five days.  I’ve been craving it since I saw a bottle in a French supermarket in Senegal going for twenty dollars compared to one dollar in France.  It is so delicious, and near addictive, it was very tempting even at that exorbitant price.  Obviously there are those in Senegal willing to pay it. 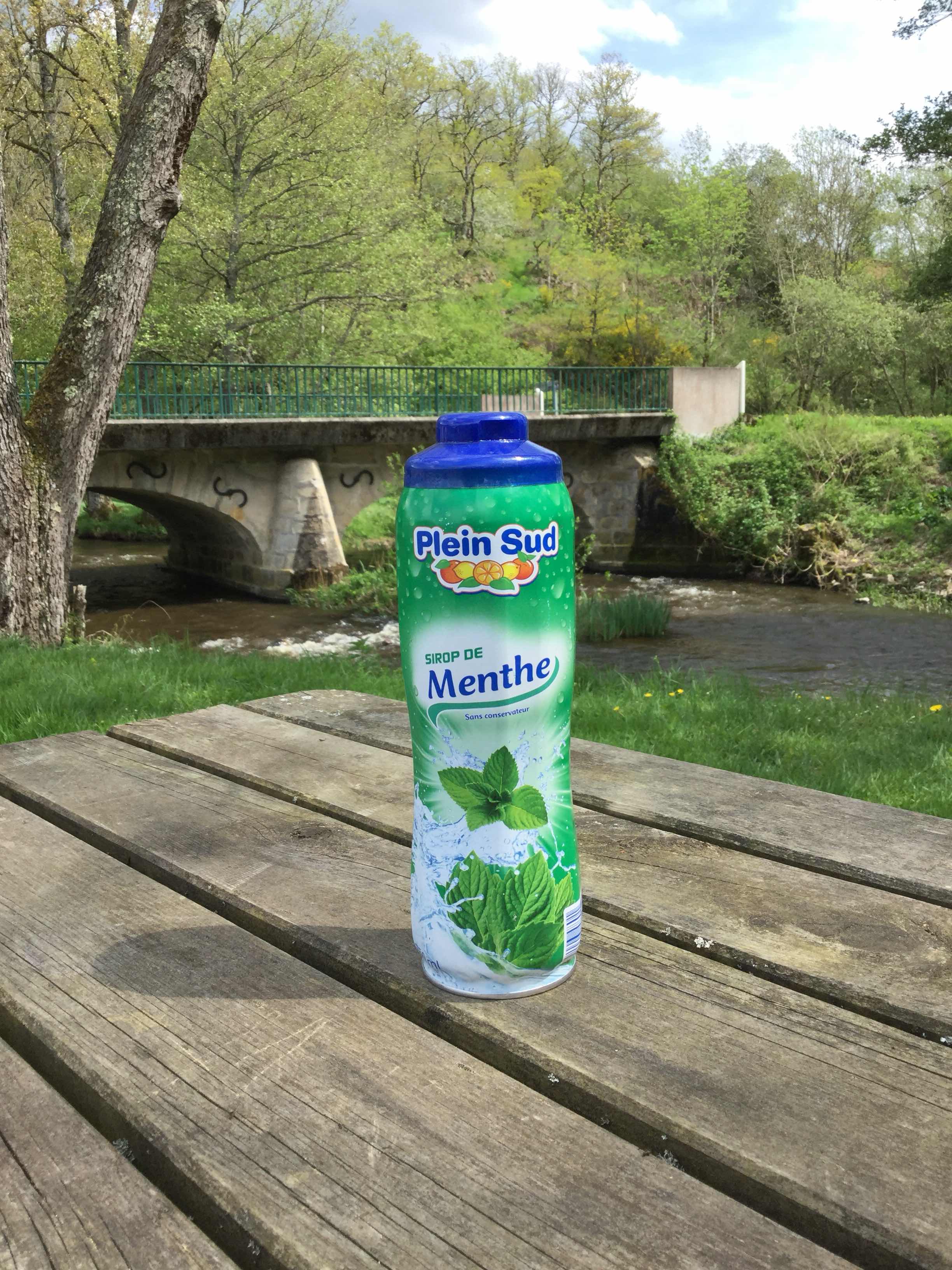 Posted by george christensen at 2:17 AM

Looking forward to following your travels across France, George. Have a minty water for me.

Is that a SKY biddon you have on the bike?

Yes, a Sky and just below it Moviestar, both scavenged in Oman.