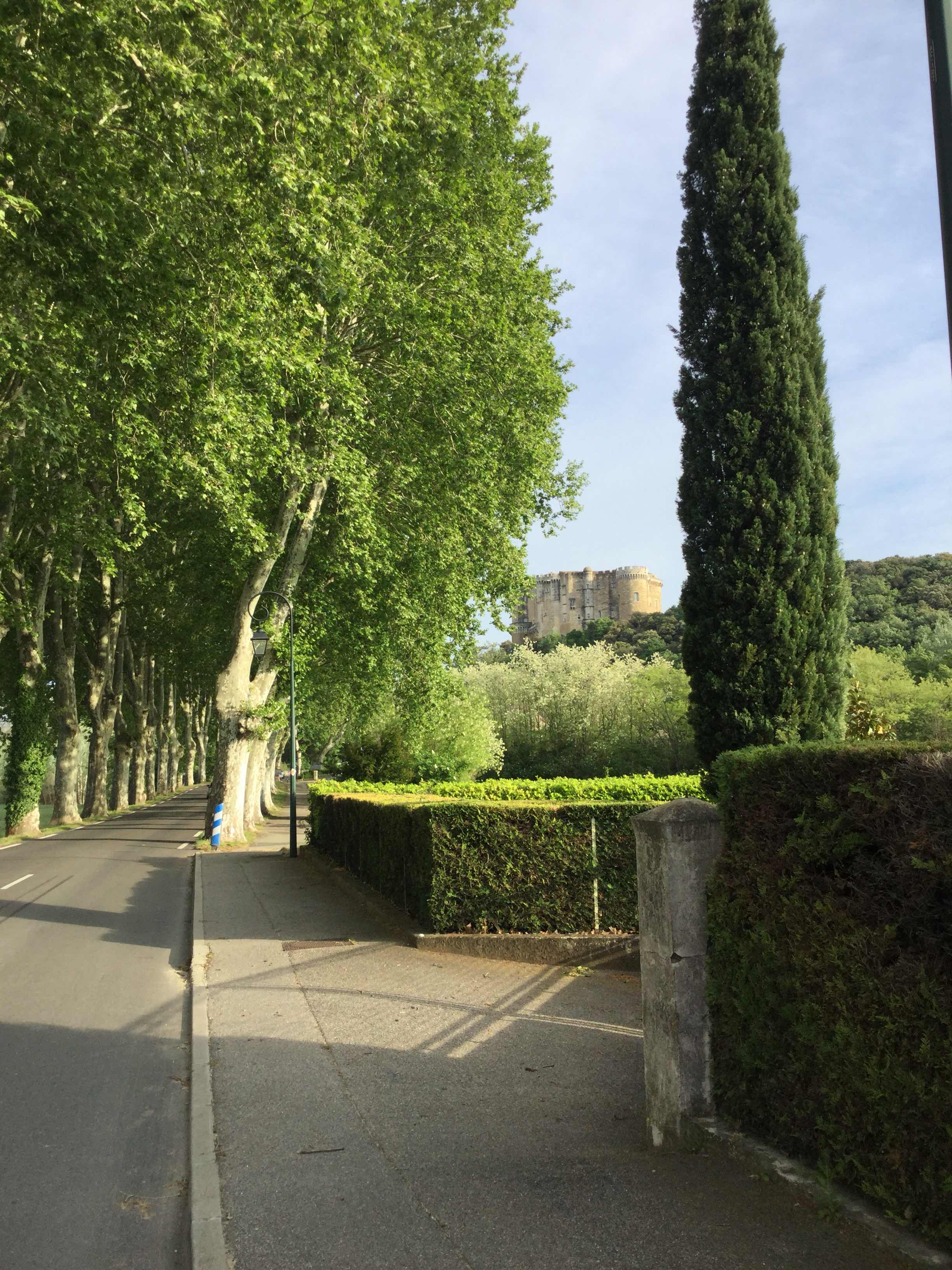 Spring has yet to fully arrive in France.  I’ve had to wear tights and my wool cap on six of the nine days I’ve been cycling.  Some years tights are never necessary.  When it was 42 degrees one morning when I emerged from my tent, I needed my fluff jacket along with my sweater and vest and wind breaker to ward off the cold.
France can be a cyclist’s paradise, but that doesn’t preclude head winds and precipitation and cold.  One thing France lacks is an abundance of easy retreats from inclement weather.  Libraries and fast food franchises are in short supply.  Cafes and bars are not so plentiful or always open.  Tourist offices and train stations are places of refuge, but they are not in great abundance either.  I’ve had to keep my breaks short when I’ve had no place to retreat to and resume riding to stay warm.

I may have been spending more time on my bike than I might otherwise due to the weather, but the adverse conditions were limiting me to fewer miles than I’d prefer.  It worked out for the best, though, when I ended up twenty miles short of Lyon on April 30.  The next day, May 1, was a holiday, which dramatically reduced the  amount of traffic I had to contend with passing through France’s second largest city.  It made for almost a carefree ride.  I was camped along the road in a thicket of trees and bushes beside a car dealership the night before and was surprised I hadn’t been awoken by the roar of traffic.  Even at 7:30 there was just an occasional car.  The French do fully embrace their holidays and engage in only the barest of commercial activity. The dank weather contributed to people not wanting to be out and about.
A day of off-and-on rain allowed me to take advantage of a municipal campground, one of the great amenities of France that I didn’t fully appreciate until last summer when cycling with Janina.  They are a most pleasant oasis of simplicity and civility. Town campgrounds don’t offer much more than the basics, but at a very modest price.  They mostly attract retirees in campers, who are pleasantly convivial.  Janina and I were usually the only ones in a tent. We were invariably told by whoever ran the campground that rarely did they have an American visitor.  We were always warmly welcomed by all and met many genuinely nice people, none of whom berated our country.  So as much as I prefer to wild camp, I no longer resist sanctioned camping.  There were a couple dozen RVs scattered around this campground, but no one was wandering around in the wet.
The man who checked me in sent me off in the morning with a “Bon route.”  After an hour on the bike continuing along the Rhône I slipped into the city of Valence hoping to see billboards or banners or posters advertising itself as the Ville Arrivée for the thirteenth stage of The Tour on July 20, the day after the L’Alpe d’Huez stage, but there were none to be seen, not even at the tourist office.  The two women at the tourist office had to consult a folder to find out the peloton’s arrival point in the town.  In the past it had been in a nearby park, but this year it will be on the outskirts of the city at a sports stadium.
If I reach Valence before the peloton on Race Day, I won’t be lingering long, as it is a fifty-mile transfer to the next day’s start in St. Paul-Trois-Châteaux, an excessively long transfer that I won’t be looking forward to at all, other than it will be relatively flat.  I was glad to be pre-riding it, as there were several tricky sections that required consulting my map—just outside Valence where bicycles were prohibited from continuing on the main road for a short spell and through the cities of Montélimar and Pierrelatte.  Though I had been this way before I had never ridden on this side of the Rhône, as it was a National Road, implying there would be more traffic than the Départmental Road on the other side of the river. There was plenty of traffic, but there was an adequate shoulder for cyclists, and an autoroute alongside that siphoned off most of the trucks.  The  road on the other side of the river might have actually had more traffic attracting those who thought they were taking the more quiet and scenic route.  It was nice to get a different view of a large nuclear plant along the river with its four smoke stacks, one of which was adorned with a painting of a young child.
As I entered the cozy town of St. Paul-Trois-Chateaux I was pleased to be greeted by an electronic countdown of the number of days until The Tour arrived. 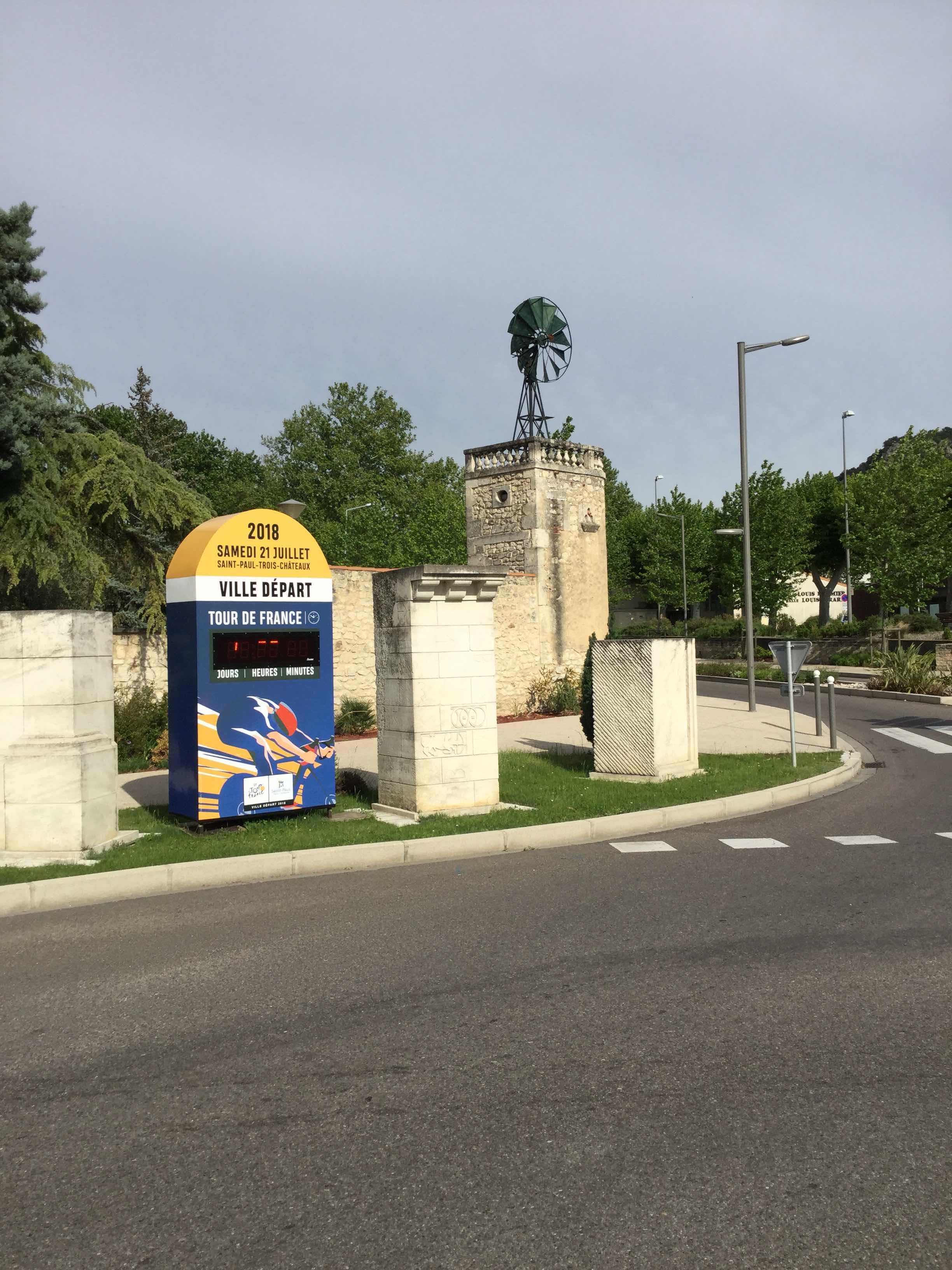 It actually had space to break it down to days, hours and minutes, but was only registering days—80.  The last time it was a Ville Étape several years ago the countdown had been a chalkboard in the tourist office.  The town’s central plaza where the stage will commence had yet to be adorned by any Tour finery or even a yellow painted line marking the official start as many towns put down well ahead of time.  I was in the thick of wine country. The pockets of forest weren’t as plentiful as elsewhere, so when I came upon one a couple miles before my goal of 75 miles for the day I slipped into it.

I arrived in Carpentras, the next big city, a little after ten the next day eager to take advantage of the WiFi at its tourist office.  I was disappointed to learn that due to budgetary concerns it was closed on the first Thursday of every month, as this was.  One year when strikes were sweeping the land, someone at a tourist office assured me the tourist offices would never strike, as they felt an obligation to be available to those visiting their country.  It’s hard to feel disappointed too long when cycling in France, as there is always something to lift one’s spirits.  It can be a work of art in a roundabout. 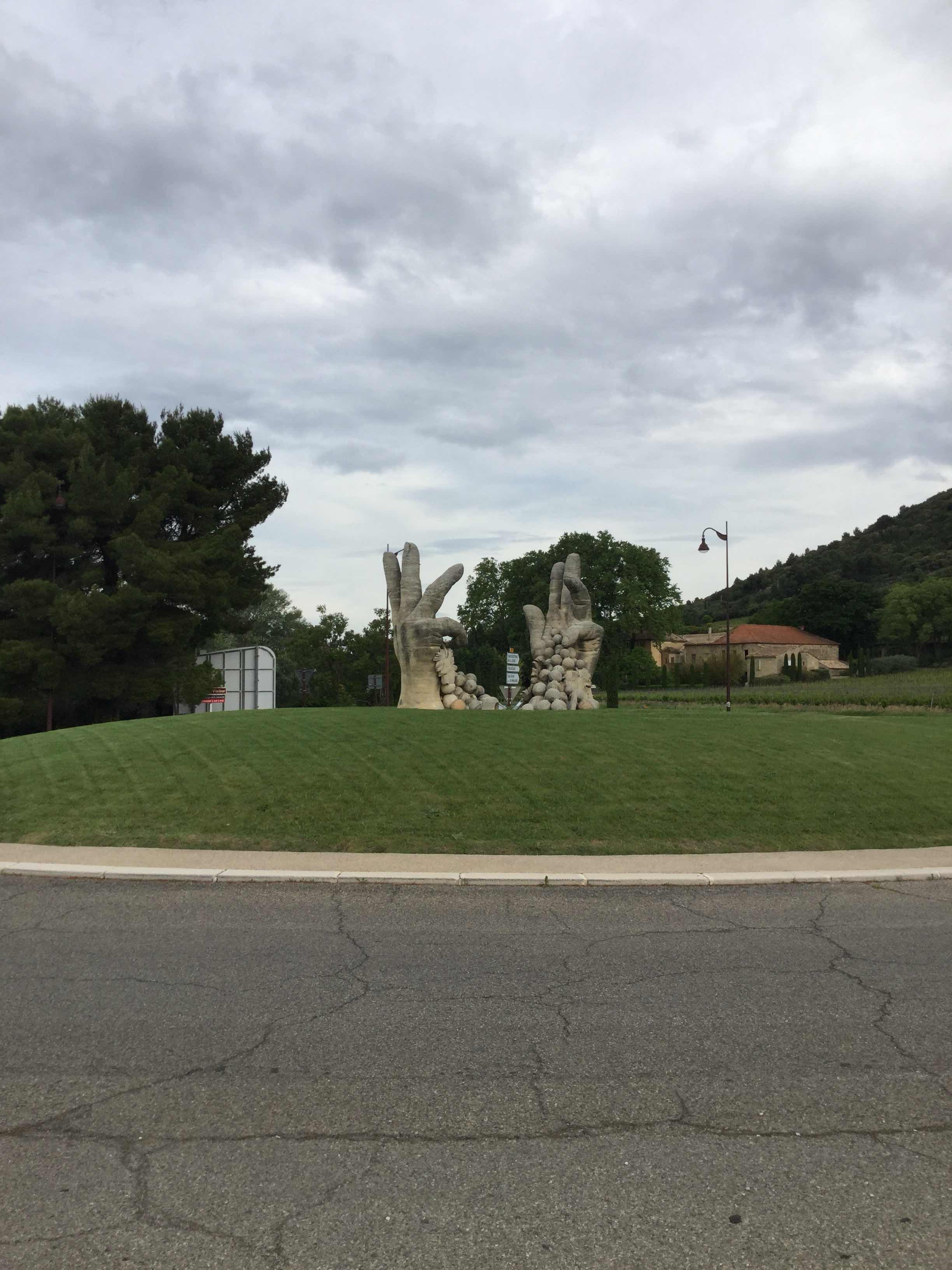 Or the many signs advertising a town’s vide grenier or an upcoming Johnny Hallyday tribute. 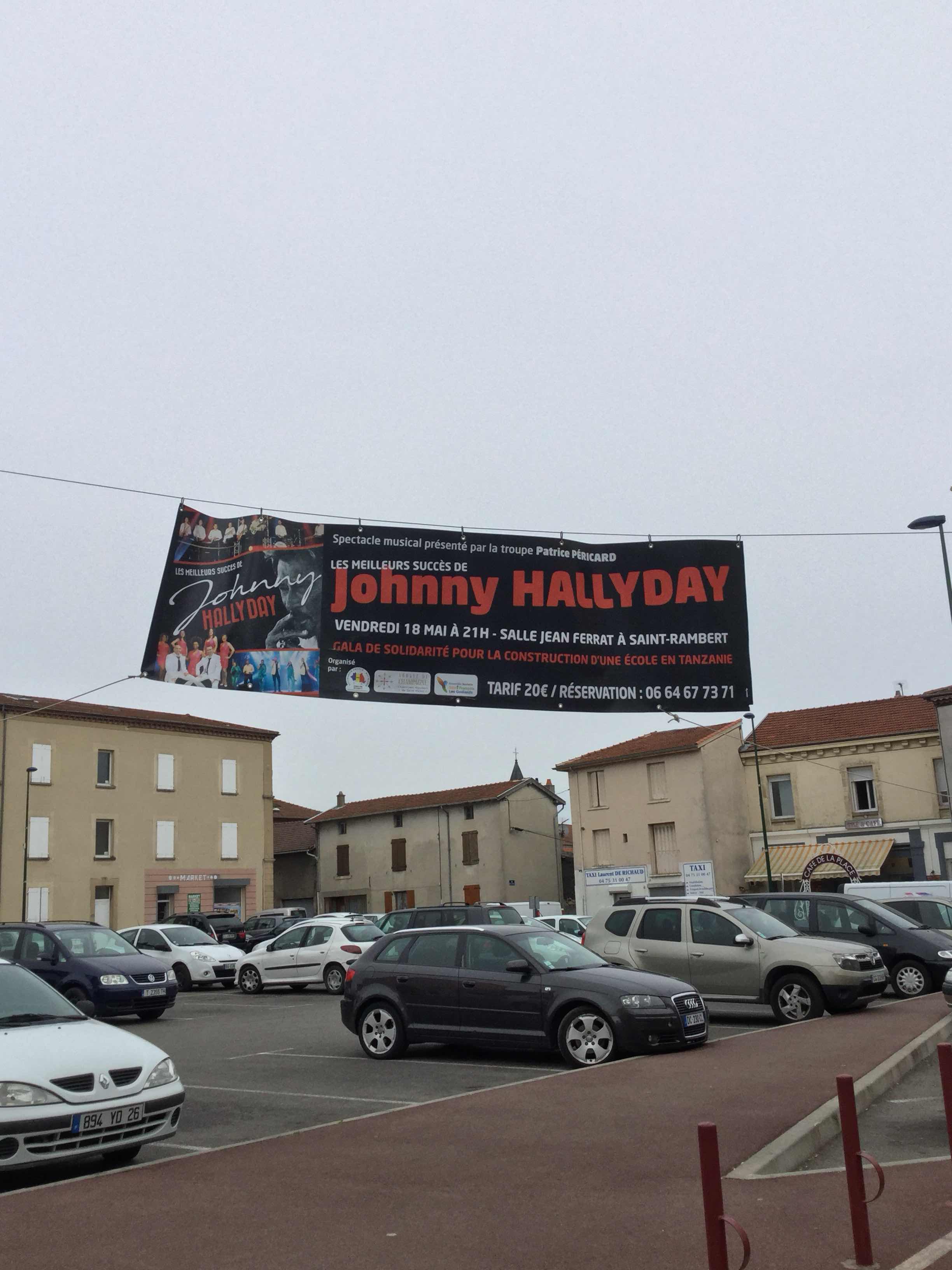 The arcades of plane trees and the pastoral scenery soothe the soul, and the occasional cyclist out for a ride, with panniers or without, dissipates whatever despair I might have for the future of the human race. And as I close in on Cannes, less than fifty miles away, I can be harkened by the world of cinema awaiting me.  It never fails to leave me with powerful memories and images that will last a lifetime.

Posted by george christensen at 11:58 PM