Another Friend in the Home Stretch 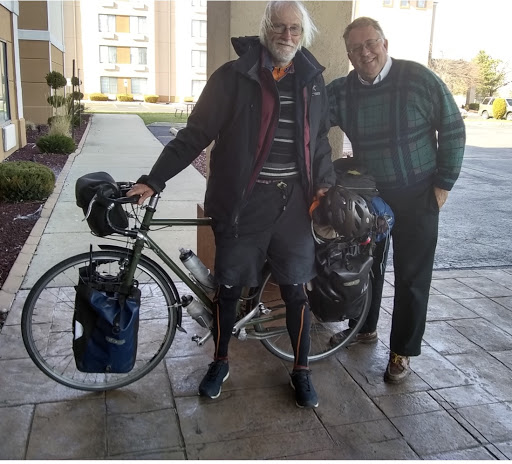 I’ve been able to drop in on friends on all of my recent tours--Craig and Onni, Florence and Rachid and Yvon in France last summer, Joel, Bill, Peter, Chris, Elwood and Robyn, Michael and Susan, Dwight and Susan, and Jeff on my fall ride back from Telluride, Bruce and Sounkalo in Mali this past winter, and Rick, Jeff and Kirk on my just completed spring ride.  I marvel at my good fortune of having such a vast array of such fine friends.  And then in my home stretch I heard from another friend who happened to have flown in from Florida on a writing assignment. He was staying in Lansing, Illinois, just across the border from Indiana, which I would be passing through. He was doing a story for the Campus Crusade website on someone who had started a program helping the homeless in Chicago Heights 25 years ago.

It was about 25 years ago that I met Mike and his wife Michele at the Telluride Film Festival, where we were all volunteers.  They are among the many exceptional people who are drawn to the festival who I enjoy seeing year after year.  They’ve missed the last few years, too busy with work, so it was wonderful to be able to catch up with him.  He was staying at a hotel right on my route making our rendezvous seem as if it was preordained.

It is always inspiring to learn what Mike is doing.  When he was living in Colorado Springs, his church work extended to counseling military personnel at the large base there.  After he moved to Florida he now counsels the incarcerated along with his journalism that has taken him all the way to Africa. His gentle demeanor is a solace to all.  It was another reminder that meeting friends while traveling makes as much of an impact on me as any sight I might see.

Besides the time with friends, this trip will be remembered for its extreme weather--the coldest April in the Midwest since 1881.  The first three days offered close to normal temperatures for this time of year, but the final four days of this 526-mile ride were in conditions that would discourage any sensible person from taking a bike ride, split between two days of riding in sleet and rain with the temperature hovering around freezing, followed by two days of riding in snow flurries into a strong headwind. The flurries were a welcome relief from the rain, but the effort of riding into the wind had me debating which were the worst conditions--the cold rain with a tailwind or being dry but having to exert myself so strenuously.  If it had been ten degrees warmer in the rain, that would have been my preference, but being wet in the low 30s was dabbling with hypothermia. Still, I ended each day filled with the glow of any good ride, even night six when I camped in sub-freezing temperatures after sleeping in doors the previous three nights, two at the homes of friends.

It gave me a chance to test my new sleeping bag, which is rated to 30 degrees.  I stayed warm, but I needed to keep on my tights and sweater.  I was almost happy that the bag wasn’t overly warm, as it will be my sleeping bag this summer in France, where the nights will be cool, but rarely less than 50.  I was also testing a new tent, an updated version of REI’s Passage Two that has been my choice for over fifteen years.  The zippers give out after three or four years of close to 150 nights a year.  Each version has slight improvements that take some adjusting to and that I’m not sure I like, though I eventually do.

This one has new hooks for attaching the tent to the poles that are more secure but require more effort to attach.  It also has different pockets in the ceiling that prevent me from so easily dangling items to dry.  The doors are more round, putting less stress on the zippers, my biggest concern.  Knowing all the testing that REI would put into any changes, I have to trust that all are for the better.  My cycling shoes also gave out in Africa.  Their replacement seemed perfectly fine and then even more so when my headlamp shined on them on the corner of the tent and I discovered that the shoelaces are speckled with reflective material as well as the backside of the shoes.  They nearly sparkled.

So my gear is all ready for my ride from Paris to Cannes next week and so are my legs.  I began this ride with a hundred mile day and ended it with a century, though the last few miles were a ride to the post office to send off my tax returns after I’d had dinner with Janina.  It felt great to be riding well after dark.  My legs didn’t want to quit.

My final two days included four more Carnegies, making it fifteen for the trip, twelve in Michigan and three in Indiana, bringing my grand total to 526 of the still standing 1,364 in the US.  Two of them had been grossly disfigured by additions to their front sides to make them handicap-accessible.  They didn’t merely put in ramps or a side entrance as most Carnegies have done, but slapped on large edifices utterly obliterating the majesty of the original building. The Dowagiac, Michigan Carnegie had become laughably surreal with a tunnel leading up to the former entrance, an unforgivable abomination. 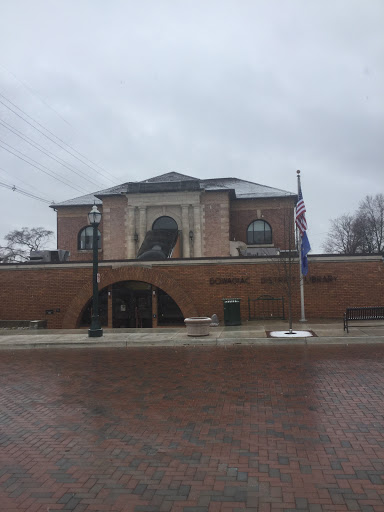 The large addition to the front accommodated a row of computers, the periodical room and the checkout desk.  The upstairs of the original library was now the children’s room, the library’s saving grace, while the lower level, a windowless dungeon, had tables and shelves of books for adults.

The Westville, Indiana Carnegie’s frontal addition didn’t so severely obliterate its majesty, as one could look at it from the side and somewhat appreciate it, but it was still an architectural blunder, a wart on a princess. 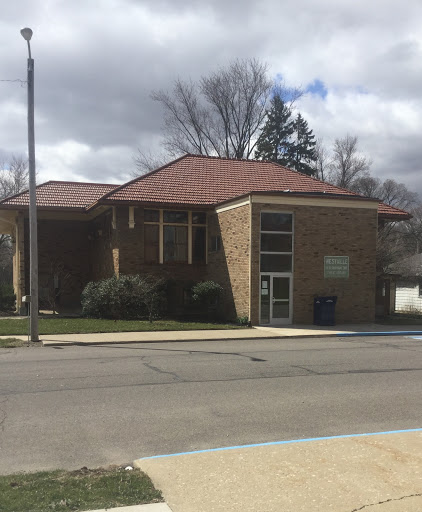 The Carnegies in Goshen and LaPorte more than made up for the blunders of Dowagiac and Westville.  Goshen’s Carnegie was the first built in Indiana in 1903. It was designed as if it would be a marvel for every one in the state, worthy of a pilgrimage, then and now, rather than the first of 167, more than any other state.  It now serves as the city hall, but is still cared for like a precious jewel.  The dome in its rotunda is inscribed with the favored writers of the time--Goethe, Homer, Hugo, Milton,  Virgil, Irving, Emerson and Dante.  It’s significance is acknowledged with a two-sided plaque giving its history and honoring Carnegie in the lawn out front, just as at the LaPorte Carnegie fifty miles to the west. 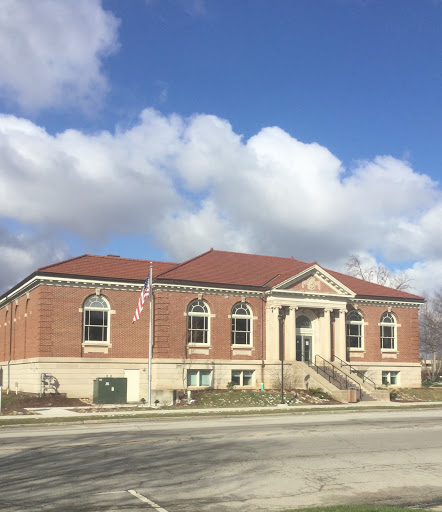 LaPorte’s was one of the last built in Indiana in 1920.  It has a large addition to the back, but remains a library.  I arrived right at nine when it opened, except I didn’t realize this part of Indiana was on Central time, so it was eight a.m.  I didn’t have time to spare as I had eighty miles more to ride.  I couldn’t linger outside even though it was a sunny day, as a nearby bank sign gave a temperature of 28 degrees.  Westville was twelve miles further, but the small town library didn’t open until three this day, so I was shutout of my last two Carnegies. The strong wind from the west of the day before gradually shifted from the north and then by mid-afternoon miraculously all the way around from the east pushing me along and allowing me to arrive home before dark.

The forty degree temperature seemed almost balmy, the warmest it had been in four days.  France will seem downright tropical, as Paris is already enjoying 70 degree temperature.  Not only will the sun’s warmth be welcome, so will the warmth of the people, who embrace a touring cyclist as some one on an adventure or perhaps a pilgrimage, unlike the perception in the US of someone who is destitute and is reduced to traveling by bicycle.  As I sat against the wall of a service station eating a peanut butter sandwich early in the trip, a young man with a baseball hat turned backwards, who pulled up in a black pickup truck, came over to me and said, "I have a spare two dollars on me I’d like you to have.  Bless you."  I’ve learned not to refuse such offerings, as it hurts the giver’s feelings.  I accept it and find someone to pass it on to--this time to my friend in Mali who is trying to raise $5,000 to send over a container of goods.  He is more than half way there.  His most worthy organization is called Drums for Solar. 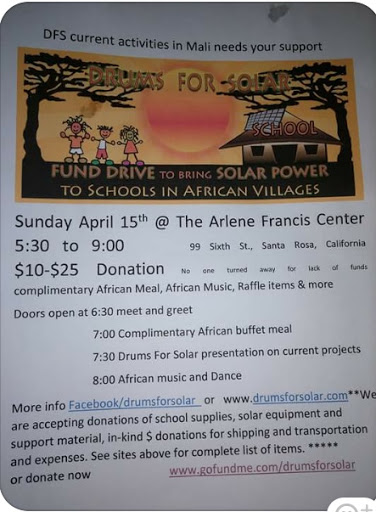 Posted by george christensen at 7:57 AM