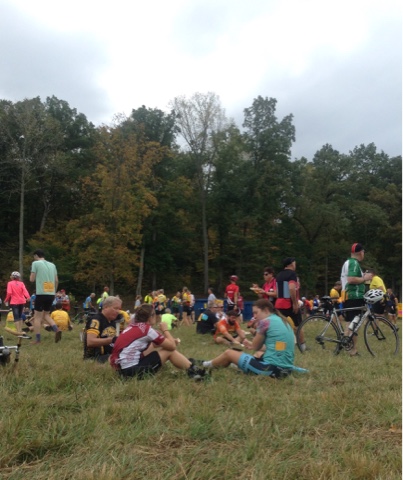 This past weekend was the fiftieth anniversary of the Hilly Hundred, the longest running bicycle event of its kind.  Bicyclists from all over converge on Bloomington, Indiana for the opportunity of back-to-back fifty mile rides through the hilly, forested terrain of southern Indiana.  It was my third participation, the first about twenty years ago and then last year.

The event isn't as popular as it once was, but it still attracts a couple thousand ardent cyclists.  Over the years, and even from last year to this, the profile of the riders has changed dramatically from cyclists of all levels of commitment to mostly the most committed.  In years past there would be a significant number of casual cyclists pushing their less than optimum bikes up the hills. This year hardly a soul couldn't make it up the hills, many of double digit grades.  Most flew up them hardly needing to shift.  Close to 99 per cent of those riding were on high-end bikes.  Nearly every rider was using clip-in pedals.  Lycra was universal.  I was among the one per centers on a bike with a rack and fenders and kick stand and unLycraed.  At the rest stops most of the bikes were laying in the grass if there wasn't a tree to lean them against.

This was not a parade, as it once was, of a wide array of bikes with character ridden by people of all sizes and shapes expressing their personality with their garb and adornments.  Now it was clones of the svelte and fit in Lycra, hardly a casual rider among them.  It had evolved into an elitist gathering of the hard corps on higher-end bikes, maybe thanks to the $90 entry fee entitling one to some food and drink.  If one could pass on the food, as I did, one could ride along without charge.  There was little out-of-the-ordinary self-expression even among the jerseys, just bland club or local jerseys.  I did have to talk to a guy wearing a Cubs cycling jersey, a fellow Chicagoan who had driven down for the weekend.  It had no number on it.  If he'd had that option, he'd  have gotten one with a 17 for Anthony Rizzo, his favorite player.  He didn't have a W flag on his bike, but he did have one on his car.  I would have asked the rider with a Pelotonia jersey its significance, but he rode by too fast.  I would have chased after him, but I was riding with a friend who was one of the rare cyclists on a bike weighing more than twenty pounds and not wearing cycling shoes, and I didn't care to leave her behind. 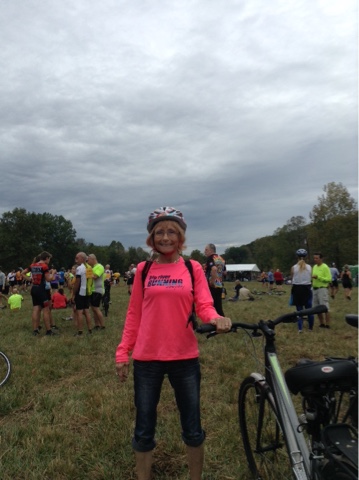 In year's past I've ridden with Dwight, but he was attending a Heartwood conference devoted to forest issues.  My other cycling friend in Bloomington, Jeff, was also unavailable for the ride, but I at least got to enjoy a lunch with him and a handful of his cycling cohorts at the magnificent kitchen complex that he established two years ago and rents out to local food vendors and uses to prepare food for his pizza restaurants. Jeff had somehow managed to get time away from his many business ventures to bike Mynamawr with Dwight this winter and then RAGBRAI. We had much to share.  Jeff was able to convey his pizza expertise to a restaurateur in Mynamawr who had been struggling to get his dough just right. He couldn't resist the abundance of food in Iowa and was disappointed to return six pounds heavier.
I still had a cycling companion for the Hundred, Dwight's girl friend Susan. At less than one hundred pounds, she has a good weight to power ratio and scampered up the hills even on her comparative tank of a bike.   She had plenty of pep, but most of those on the ride, who were on bikes that cost as much as the cars of many of the clients she serves as a social worker, flew by us.  It allowed us to survey the steady stream of our fellow riders as they bombarded us with a chorus of "on your left" and an occasional "car back" or "car up."  There were few cars other than the occasional vehicle patrolling the course.  At intersections where there might be traffic, a police officer was stationed.  The course was adequately marked with small yellow arrows and occasional warnings of "nuts," also written in yellow, where a walnut tree could be shedding its golf ball-sized product.  They'd mostly been cleared from the road, but there was the ever present danger of another falling.

I was able to see Dwight Saturday morning before he headed to Paoli fifty miles to the south for the weekend.  The start of the ride was in Elletsville, just five miles from his farm. As we breakfasted on fresh food from his garden, he noticed a feral cat peering at us through a thicket of blackberries.  He was not a welcome visitor, as such critters prey upon his bird population. He quickly grabbed his shotgun and dashed out the door.  He got off two shots, but wasn't sure if he'd gotten him.  His aged Labrador is no longer the tracker he once was, so Dwight and I took a stroll around.  The vegetation is thick on much of his property, so we couldn't find the cat, though Dwight was certain he'd wounded him.  "If you see vultures circling later," he said, "you'll know where he is."

We wandered over to his former communal garden, what he called his "Communist Plot."  None of his friends who used to come out and garden had returned this year.  But he had a new friend who had a vast and varied tomato crop much larger than all the small patches put together.  It was a commercial operation mostly harvested for the seeds that would be sold worldwide. It was an impressive site with high fencing to thwart the deer. The many varieties of tomatoes were carefully labeled.   Dwight offers tomatoes by the bucket to his friends.  When he returned Sunday night he prepared a delicious salad of the many hued tomatoes fresh off the vine.  The main course was rabbit, that he had shot.  He and Susan baked it in a pie.  There was enough to send me on my way the next day.

I didn't get as early of a start as I might have as I had 120 pages left to read in Dwight's soon to be  published third book, his second volume of Wild Tales.  This one is called "All Over the Place."  It recounts his travels in Africa, South America and Asia going back nearly fifty years, climbing mountains and biking and just exploring. There are also rollicking chapters on sinking a whaling ship in Norway and spending time in a Mexican prison and looking after a quadriplegic brother and outwitting the medical profession in paying for a knee operation and discovering what he thought was a meteorite.

I was the first person to be reading the actual print of the book that Dwight had self-published through Amazon.  Dwight had had several friends proofread and edit his on-line rough draft, but a few typos had slipped through.   I wanted to find as many as I could before I left so he could all the sooner make the book available to the public and print up a few more copies for friends.  Most were minor that few would notice, such as an inconsistency in using "ok" or "okay" and not always putting a comma in numbers of a thousand and more and making that common mix-up of peddling and pedaling.   He also used the expression "win-win" in a story from the seventies before the term entered the lexicon.  The stories were always so gripping it was hard to slow down to catch such things.

My route in to Bloomington a few days before took me across the Wabash River at Terre Haute on the Theordore Dreiser bridge.  There was a lone Carnegie Library on the sixty mile stretch to Bloomington in Spencer.  It was now a museum.  It acknowledged its Carnegie roots with a Carnegie Coffee Bar.  It's corner location allowed this historic building to fully display its unspoiled grandeur. 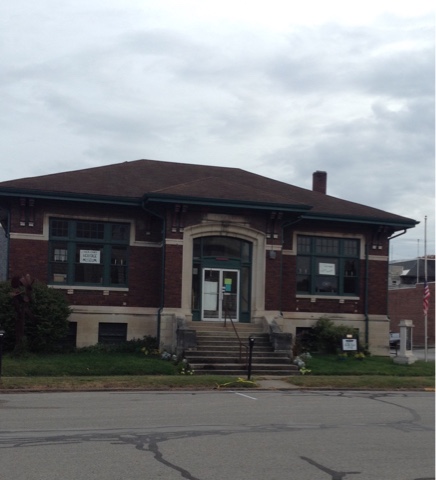 My route north from Bloomington would take me past four more Carnegies to the west of Indianapolis.  I had previously visited the three still standing Carnegie branches in the city as well as those to its east.  Then I'll hit seven more of Indiana's 166 Carnegies, the most of any state, before crossing back into Illinois.  Slowly but surely I'm getting to them all.

Posted by george christensen at 9:40 AM

Hey now , George! Did you ever get a chance to check out my friend's dad's book on Amazon Kindle, "Two Miles an Hour?" It's by Robert Buckley.

Bill: The book is on my reading list when I get home. Don't know about the Greek influence in Indiana. Did you get a chance to watch American Honey?

RE: "American Honey," not yet. However, I did manage to catch the trailer. I'll take your recommendation as reliable that I should carve out a couple hours without fear of losing them irretrievably to a Shia Laboeuf appearance. LOL

Safe travels, George! Looks like fine riding up there in Indiana right now.