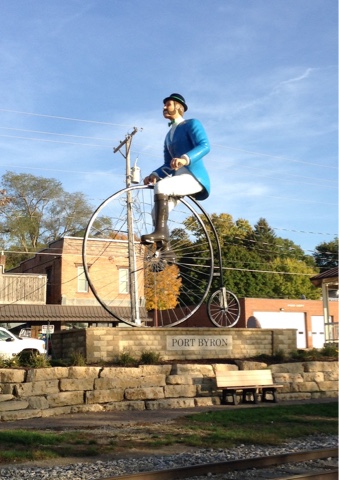 This has become a ride without an end, just as I always long for.  Any inveterate traveler who looks upon a map can't help but see somewhere else to go.  My map of Illinois with the 111 towns with a Carnegie circled continually urges me to seek out those without a check beside them.  One hundred miles, a good day's ride, is not too far to ride to get to another.  And so after finishing off the 58 Carnegies in the northern third of the state in Freeport, rather than returning to Chicago I headed southwest back to the Mississippi and down to Aledo one hundred miles away.

From there I could cross the state hopping from Carnegie to Carnegie in another corridor I had yet to visit, picking off nine of the remaining twenty without a check.  At a certain point in that circuit I know I will face the dilemma of heading another hundred miles south all the way to the bottom of the state and then zig-zag from Carnegie to Carnegie to complete the slate.  What a day that will be. I hadn't anticipated it happening for several more years until I began extending and extending this ride.

The Carnegie in Freeport would have been a worthy finale to this Carnegie ride, as it was the first built in the state in 1901.  It was early in Carnegie's giving, when he had funded less than one hundred libraries, a number that would eventually exceed 2,500.  The city was so honored that "Gift of Andrew Carnegie" was chiseled above the entry to this palace of a building that now serves as the city's town hall. 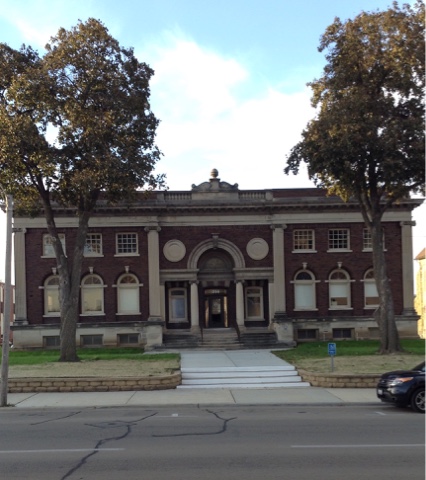 The new library overlooks Debate Park where the second Lincoln-Douglas debate took place.  As in Ottawa, it is highlighted by a sculpture of the two orators with Lincoln sitting in this one so he wouldn't tower over Douglas. 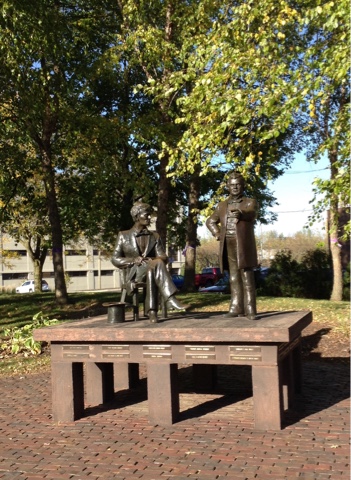 There were seven debates during their Senatorial race in 1858, which Douglas went on to win.  I checked to see if I could include the five other sites into my route.  I didn't realize that the fourth debate took place in Charleston, where I visited a Carnegie on my way to Bloomington three weeks ago.   Four of the debate towns had a Carnegie.  I had been to the one in Alton, across the river from St. Louis a few years ago.  And I had been to Galesburg on another trip, not realizing its Carnegie had burned down in 1958.  As with Charleston, I hadn't noticed any signs of tribute to the debates in either Alton or Galesburg.  The two other debate sites, Jonesboro in the south of the state, and Quincy on the Mississippi, unfortunately don't fit into these travels, though I, of course, could make them if I really wanted and if the imminence of colder weather wasn't an issue.

I followed the Stagecoach Trail for over fifty miles out of Galena to the Carnegie in the small town  of Warren, just south of the Wisconsin border,  and then down to Freeport, a veritable city with lots of stoplights.  It was the first interracial city I had passed through in Illinois since East St. Louis.  It was settled by German immigrants in the 1850s.  One of the first significant industries was a pretzel bakery, earning the city the nickname of "Pretzel City."  Its legacy lives on with the pretzel the mascot of the high school. 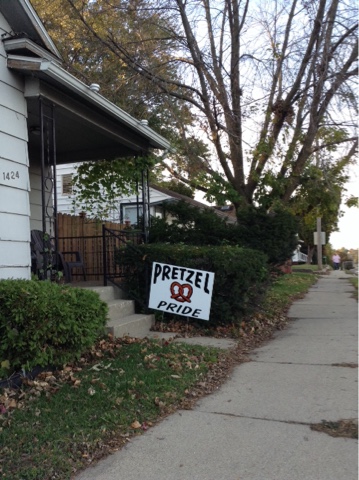 Between Warren and Galena stands the highest natural point in Illinois, Charles Mound at 1,235 feet.  The Wills Tower in Chicago is the actual highest at 1,450 feet, plus the 594 feet of Chicago's elevation.  The Willis Tower was once the tallest building in the world, back when it was known as the Sears Tower.  There are those who make a quest of climbing the highest point in each state.  I didn't notice anyone attempting this one.

The Carnegie in Warren, with a population of 1,428, had limited hours.  It wasn't open when I stopped by even after a breakfast of hotcakes where I was able to charge my iPad--no WIFI though, which its waitress didn't realize.  When I asked her if there was WIFI, she said, "I don't know.  People do their Facebook here, so maybe." 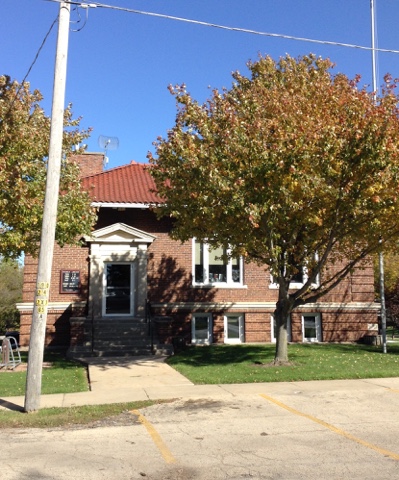 My long hop from Freeport to Aledo felt like a lengthy transfer between Ville Ètapes at The Tour de France.  There were three Carnegies though on the way that I had previously visited.  It had been a Sunday last year when I stopped by the one in Polo, so I was happy for the opportunity to give its inside a look.  It's portrait of Carnegie was mounted in a special frame over its fire place.  To the right was the portrait of a local woman who had donated a significant sum to the library.  The librarian said it allowed them to have longer opening hours than they otherwise would.  She was excited to hear of some of the nearby Carnegies I had visited that she hadn't gotten to.  Her ambition was to visit all the presidential libraries, though she doubted she would.

I also stopped by the Carnegie in Fulton that I had visited last year on my way back from Telluride. From there I began a forty mile ride along the Mississippi on a most tranquil bike trail that took me by a gigantic bike sculpture in Port Byron and on to Moline.  The camping was looking iffy as I closed in on the Quad Cities, so I plunked down at the Fisherman's Corner campground administered by the Army Corps of Engineers.  It looked out towards the Corps' dam eight miles upriver from Moline.  There were a couple dozen over-sized RVs taking advantage of its last few days before closing for the winter on Sunday.  I was the only one in a tent.

There were just a couple other cyclists on the trail taking advantage of the sunny, warm fall temperatures, but none with panniers.  Stores along the way reflected the prominence of the river culture--Booze and Bait, Pedal and Paddle.  The campground host said they'd only had two or three cyclists all summer.  It may seem that the touring cyclist is an endangered species, but I have several friends who are presently breathing some life into the breed--David from Telluride is on a long ride to visit his mother in New Jersey retracing some of my route across Kansas and Missouri, Ralph is back riding in the South of France approaching Digne where Janina and I met up with him this past summer and Nicolas of gypsybytrade is presently touring in Eastern Europe and writing most eloquently of it.  Another cycling friend I'm in regular contact with, Léo, just completed a five-day ride from his home to Bordeaux and back.  He reported meeting two Argentines riding from Copenhagen to Barcelona. And I am happy to report that Vincent of Melbourne is recently back from a week-long ride into the Outback, where summer is approaching.

Its a different story in our hemisphere, where I can feel the chill of winter in the early morning, breaking camp with the temperature not even fifty.  I start the day bundled up knowing though that over the next few hours I will be able to shed first my jacket, then sweater and vest and tights and gloves and wool cap.  By noon it will be seventy and almost summerish.  I have to remind myself to drink, as I realized one morning when I was startled by a bright yellow stream of urine.  I've already had hepatitis, so I didn't have to worry about that.  I didn't think it was from anything I ate, though I'd had a couple of avocados I'd rescued from an Aldis dumpster the day before along with a loaf of bread and bananas and yogurt and apple juice, my first score of these travels thanks to the cool weather.  I did check my eyes at the next mirror I encountered to see if they had a yellow tint.  That was how I was diagnosed by my dentist of having brought hepatitis back with me from India.

Another symptom is extreme weariness.  I feel none of that, as after a couple of thousand miles I am fit enough for The Tour, which announced its route for 2018 this past week.  It starts with a nine-day swipe across the top of the country from the Vendée in the west on the Atlantic to the east and then has a long transfer to the Alps where it will begin an eleven-stage swipe across the bottom of the country before flying back for the final ceremonial stage into Paris.  There are not too many new Ville Ètapes, but it will still make for a fabulous summer ride. 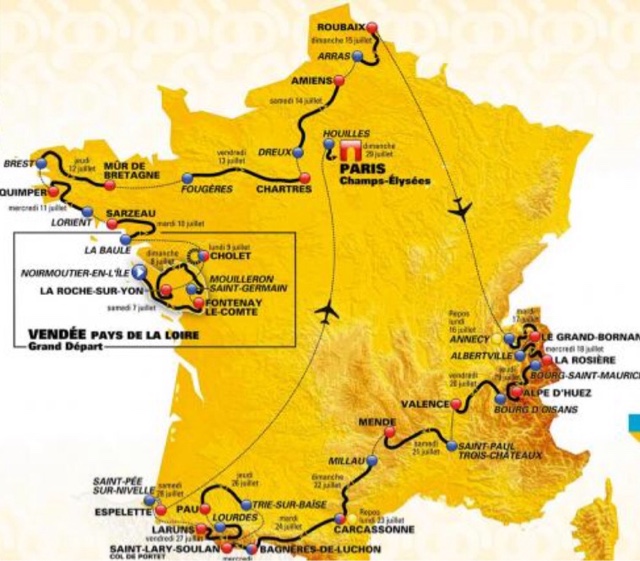 Posted by george christensen at 7:42 AM