Having spent the night indoors I didn't know how cold of a night it had been until I went outside and discovered my bike covered in frost and the one water bottle I left on it frozen solid. A thermometer gave a temperature of seventeen degrees.  But the sun was shining after a two day absence and there was no wind, so it didn't seem as cold as it was, and I had no hesitation of loading up and getting on down the road. 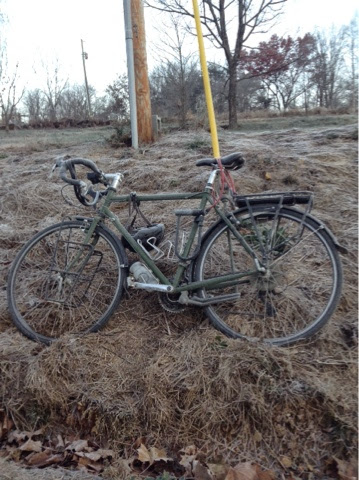 I had arrived at the childhood home of our friend Ruthie right at dark the night before, just hours after she had arrived after over twenty-four hours of travel from Massachusetts via Megabus to Knoxville, then bicycling a bit before being transported the rest of the way by Tim.  I was a little late in arriving as it was further to her home from Pineville than I realized.  Fortunately Ruthie's father happened to drive past me on the outskirts of Pineville and let me know I had a thirteen mile ride, rather than the two or three I anticipated, once I turned onto highway 190.  If I hadn't known I would have been moaning, "How much further can it be, how much further can it be," as the sun sank lower and lower and the terrain dealt me one steep climb after another.  At a certain point I might have deduced that the addresses were in increments of 1000 to each mile and their address in the 13,000 range meant I had thirteen miles to ride in all, but I'm not sure about that.

Knowing how far I had to go, instead of worrying if I could make it before nightfall, I could enjoy the Kentucky backwoods on the snaking, hilly road through rugged terrain with ridges to my right and left.  If dark caught me, I'd have a fine campsite in the woods.  But I needn't have been concerned, as two miles before I reached my destination Tim drove by coming to rescue me.  I was close enough that I didn't need to avail myself of his services, though I did appreciate his concern and also his thoughtfulness in marking the turn-off by parking his car at the point and turning on the flashing red light of his bike perched atop his roof rack to guide me as if it were a lighthouse.

It had been nearly two decades since I had last seen Ruthie back when we were fellow bicycle messengers in Chicago and she lived at the Catholic Worker House in Uptown where Tim had also lived, but there was no mistaking her distinctive bright smile, even in the dark.  Her home was even more idyllic than I imagined, with a small pond and a herd of goats and peace and tranquility all round.

Ruthie continues to make a career as a bicyclist transporting goods, but it is now mostly of the larger sort.  In 2002 she moved to Northamptom, Massachusetts and co-founded the Pedal Power cooperative, a trash and hauling service exclusively by bicycle.  It has grown into a crew of sixteen servicing 600 clients, including the town of Northamptom emptying its 80 downtown trash cans.  Their trailers can haul as much as 300 pounds. Her operation has received national attention, including articles in the Boston Globe and Sierra magazine.

She'll be driving down with Tim to Fort Benning for next weekend's 25th annual protest of the School of Americas.  Its been a few years since she last attended, though she has long been an ardent supporter.  In 1995 she was among those arrested for pushing the protest on to the base.  She was given a suspended sentence and ordered not to show up again.  She returned the following year and once again crossed the line on to the base defying the authorities, for which she served six months in prison. She has no regrets and says prison was a worthwhile experience.

I had been hoping she might have wanted to bike at least some of the 400 miles from Pineville to Fort Benning with me, but she prefered to linger with her parents and her young nephew and niece in Pineville until Thursday.  Tim will remain too, so I am on my own for the rest of the way, or so I thought. Tim said he would be on call if I had any emergency.  I noticed the day before I had broken one of the four attachment points of my rear rack to the frame of my bike.  I wasn't overly concerned, but Tim thought I should try to find a replacement part for the piece that had broken.

Twenty miles down the road Tim was awaiting me.  He waved me down with an object in his hand.  I thought I must have left something behind, but couldn't imagine what it was.  Instead, he had gone to a hardware store and found the part I needed, another exemplary act of generosity.  Could one possibly have a better friend?

Shortly after the repair I climbed to the Cumberland Gap Tunnel on the Kentucky/Tennessee border.  Bicyclists are not allowed through. A pick-up truck is on standby to give cyclists a lift through the half-mile tunnel that has a perfectly wide shoulder.  I was the second bicyclist of the day, the other a local who is a regular bicycling from Harrogate to the larger town of Middlesboro and all its stores including a Walmart. Middlesboro once had a Carnegie but tore it down.

Harrogate is unique in having a Carnegie on its Lincoln Memorial University campus that is still used as a library.  The vast majority of Academic Carnegies now serve another purpose.  The library had been greatly expanded, but at least it still remained a library.  It had been adequate until the 1960s.  It looked out on the spacious quad of the small campus. 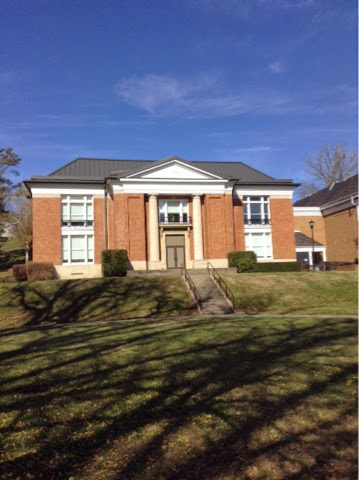 By noon the temperature was a balmy forty.  For the first time in three days I no longer needed wind pants over my tights and I could shed my down vest.  I could also put my solar panels to use for the first time in days.  I acquired them just before I left and have been experimenting with them.  They haven't been a necessity with all my access to electric outlets, so am still learning how much energy they will provide and how fast they will charge my iPad and phone and auxiliary battery.  When I lay the panels across my tent and sleeping bag on the back of my bike as I ride along the sun doesn't hit it as directly as when I take my breaks, but it does charge some. 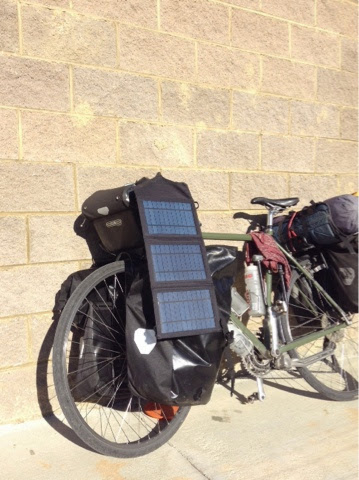 Later in the afternoon I received an email from Tim with information on a bike shop in Knoxville open the next day on Sunday.  That very morning I had broken the cleat on one of my shoes.  I could still manage, but it would be easier with a cleat.  Tim had called the shop and confirmed they had the cleat I needed and that they opened at noon on Sunday.  I camped twenty-five miles outside of Knoxville behind a wall of logs that were isolated enough that I could end my day with a call to Janina, who was likewise experiencing sub-freezing temperatures in Chicago. 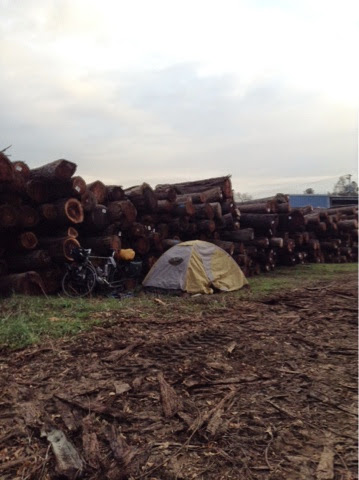 Posted by george christensen at 6:55 AM