It hardly seems the South with night-time temperatures in the teens and day-time temperatures not much above freezing.  No one is sitting out on their porches or hardly walking the streets.  When I spot a rare pedestrian who I can ask directions of, they can barely speak through their chattering teeth.  Folks in these parts are not accustomed to such cold and don't know how to cope with it, shuffling along as fast as they can with hunched and shivering shoulders.  One of the few indications I'm in the South, with all the usual franchise businesses dominating the towns, are signs advertising boiled peanuts and odd ones such as, "Free labor for a place to hunt."

When the temperature bottomed out at fifteen two nights ago, even I felt the cold.  I was warm enough when I turned in keeping my tights on, but as the temperature inched downward I was forced to put on my sweater as well.  I could feel the stab of cold air here and there where the down in my thirty-year old sleeping bag was a little thin. By morning ice had formed in my three water bottles I'd brought into the tent, but at least they hadn't frozen solid, though the Ramon and peas left over from my dinner, that I had intended for breakfast, had.

A thick frost encrusted my rain fly.  I hadn't thought to place my tent where the rising sun could catch it.  I shook as much of the frost out of it as I could, but I still couldn't roll up the tent tight enough to fit in its sack.  Fortunately it was a sunny day.  I laid it out at my first stop in Bremen after twenty miles of riding, and it was soon dry.  I had had a quick briefing with Tim earlier in the day.  He was parked along the road awaiting me after spending the night in his car behind a warehouse near some railroad tracks, a typical sleeping site for him.

It would be our only encounter of the day, as it was time for him to return to Kentucky to fetch Ruthie and bring her down to Fort Benning.  He'd had a good two days of snooping around rural Tennessee and Georgia while keeping tabs on me.  One of the highlights was finding a library with the New York Times, the first since Louisville a week ago. He'd also found the book "Chasing Lance" for a penny at a resale shop.  It was a gift for me.  I'd read it long ago, but was happy to add it to my library.  And I had a gift for Tim, a Jack Daniels bandanna, the first bandanna I'd found in a thousand miles, way below average.

Tim was looking forward to returning to the bountiful dumpster he had discovered in Middlesborough, twenty miles from Ruthie's home. Knowing he'd be stocking up there, he left me with with some pastrami, cheese, gorp and cereal.  Perhaps his best contribution was some matches the day before.  Mine had become damp and I was unable to light a candle in my tent.  It was fortunate I couldn't, as it was the next night when I really needed it for a few degrees of warmth as I ate and read before submerging myself in my sleeping bag.

I had to bike nearly seventy-five miles into Georgia before I came upon a Carnegie in Rome.  It was no longer a library, but it most strongly remembered its past, a common sentiment in the South.  In five different places Carnegie was acknowledged as the library's benefactor.  The building was identified as "Carnegie Library" on its facade above the four columns at its entry.  The rock out front also reminded any passerby that it was a Carnegie building. 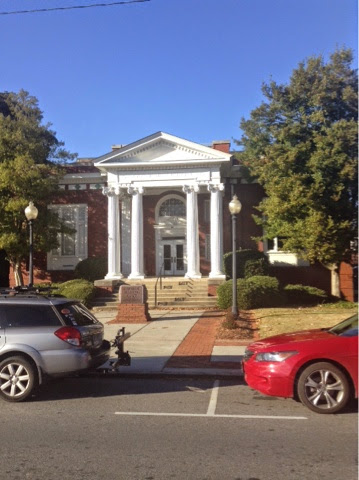 A plaque on the building referred to Carnegie as an immigrant and philanthropist and that he was responsible for twenty-four libraries in the state. 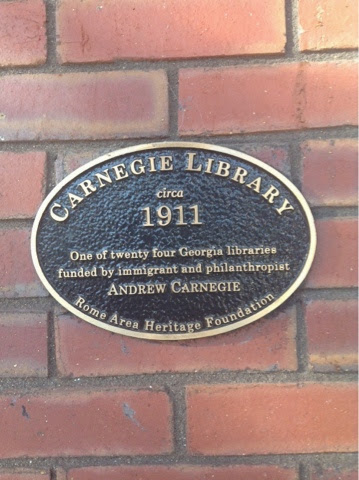 A sign posted on its lawn referred to it as a Carnegie Building and listed the present tenants. 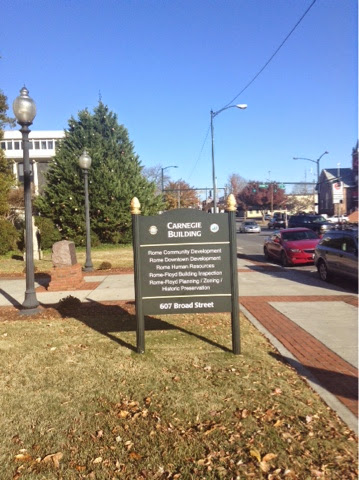 The fifth mention of Carnegie was on a plaque outside the entry to the huge new glitzy library on a hill two blocks away. 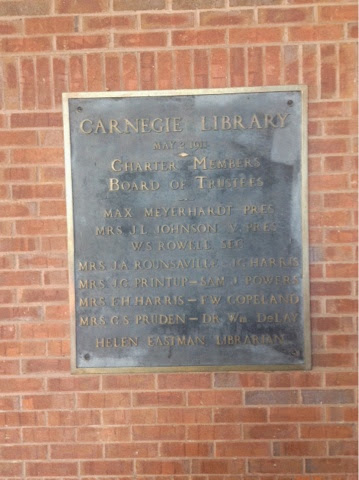 The next Carnegie in Newnan, nearly one hundred miles south, was similarly proud of its heritage.  As I was circling around trying to find it, a distinguished-looking white-haired gentleman came to my rescue.  It was just a block from where I was and he was happy to walk me over to it and let me know that it was the only Carnegie library that had been decommissioned as I library, serving as local government offices including a courthouse for twenty years, and then had returned to being a library.

He was the pastor of a nearby church and invited me to a Thanksgiving dinner there that evening.  "I'm sure it will be the best meal you've had in a while," he added.  I had been eating very well thanks to Tim, but he was probably right.  If the invitation had included a place to sleep, I might have considered, but there were two hours of light remaining in the day and I had hoped to get another twenty miles down the road, so I could make it to Fort Benning the next day and maybe even swing into Alabama for a couple of Carnegies, so had to decline.

An African-American driving a Baptist church van the previous day had stopped at the top of a hill to offer me a ride to the next town six miles away.  There was less than an hour of light left in the day.  If he had thrown in a meal and a place to stay, I might well have agreed to it, if only for the cultural experience.

The Carnegie in Newnan honored Carnegie with a copy of a portrait painted by the noted Scottish painter John Young Hunter who spent time in Taos, New Mexico with Mabel Dodge Luhan, legendary benefactor of D. H. Lawrence.  It hung over a fireplace and was flanked by a Scottish scarf and a children's book extolling Carnegie and a pair of one-page biographies on easels of Carnegie and Hunter. 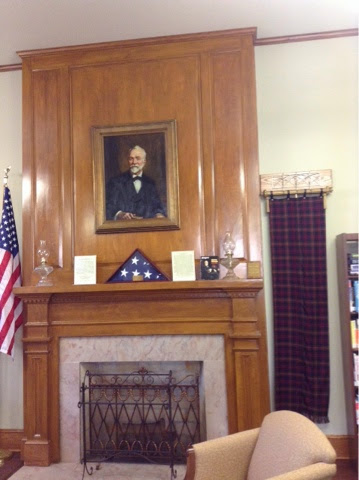 On the opposite wall was a Carnegie quote--"No man can become rich without himself enriching others." 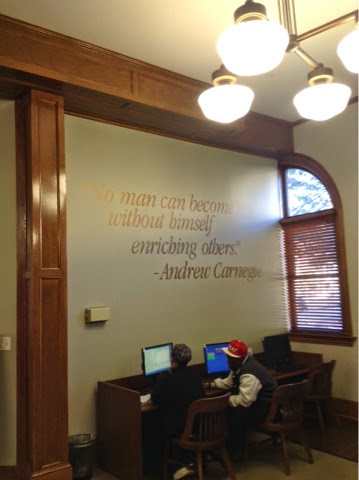 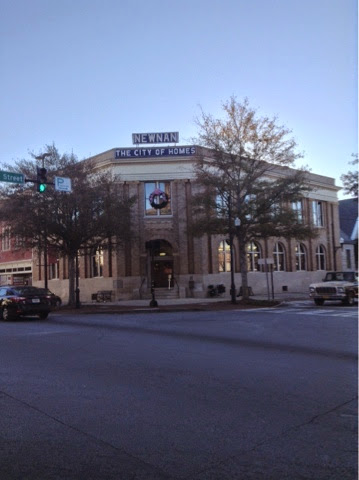 The plaza was populated by painted horses similar to the long-ago Cows of Chicago.  Louisville had also been decorated with painted horses, though in gallop.  The town of Calhoun in northern Georgia was scattered with decorated rolls of hay, though rather shabbily compared to the much more artful constructions at The Tour de France.  They were promoting an upcoming Farm Week.  And the weather promises to cooperate with seventy degree temperatures forecast starting Sunday.  That is almost too good to be true. 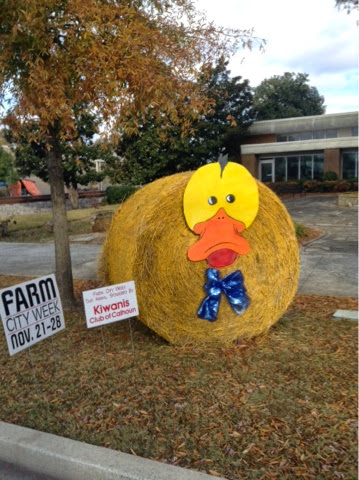 But even forty degrees today under sunny skies made for great riding through the vast woodlands of Georgia. 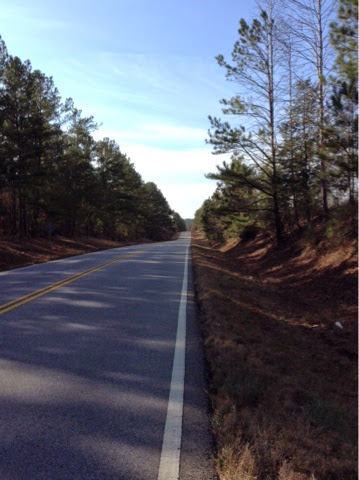 I could keep riding right up to dark with nothing but premium camping at my fingertips.  And I had the added bonus of cell phone reception as fine as if I were at the Marriott.  Janina had the great news of just being given an extra class to teach winter quarter at Columbia.  And it was at two p.m. on Tuesdays and Thursdays, so she won't have to get up at the ungodly hour of five if it had been at nine, as she had to do this present quarter. 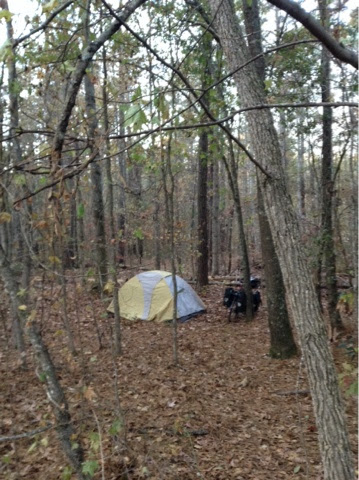 Posted by george christensen at 8:49 AM