I was surprised when a couple drops of rain splotched on my tent as I was taking it down.  I knew rain was on the way, but I wasn't expecting it quite yet.  At least I was able to break camp before the heavy overcast began seeping a misty rain that eventually became a day-long light drizzle. I put on my booties for the first time, which don't entirely keep my feet dry, but do prevent them from becoming soaked.  Even with the booties, my feet still felt chilled. I was somewhat able to otherwise ward off the cold near freezing temperatures by the exertion from the occasional climbing on the way into Knoxville and then out.  I wasn't toasty by any means, or particularly reveling in the ride, but I can say I found some warmth from the pleasure to be out braving the elements.

I had only one Carnegie to track down in Knoxville, as two had been torn down, including a branch library for African Americans.  The lone standing Carnegie was on the University of Tennessee campus, located on Circle Drive, a prestige address.  Though I had been riding in the rain for most of the two hours from my campsite, it had avoided this corner of the campus. 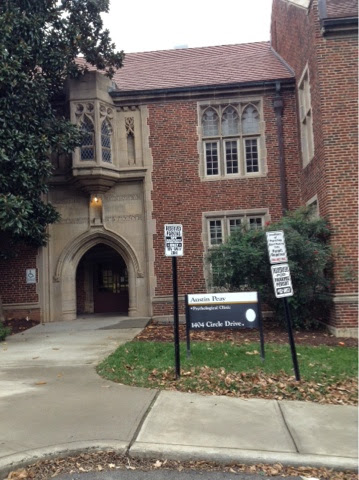 The library was now a psychological clinic, as had become the Carnegie in Jeffersonville, Indiana.  A historic plaque nearby didn't comment on Carnegie's gift, but rather gave a brief summary of the desegregation of the university.  In 1952 a federal lawsuit opened enrollment to African Americans in graduate and law programs.  Eight years later under threat of a lawsuit, three African Americans gained entry to undergraduate studies.

Thanks to Tim's research I headed to Bearden Bikes to replace the cleat that had broken off one of my shoes, the first time I had suffered such a mechanical.  I knew its end was near and that I'd soon have to replace it, as it was so worn that I'd occasionally kick out of the pedal, but I didn't expect it to break off as it did.  It had me wondering if that is another spare part I ought to carry with me.    The shop was beyond the downtown district of the university out in the suburban sprawl. After several miles I was concerned that I may have missed it and stopped a jogger to ask.  He only knew of a shop called the Bicycle Zoo and said that it was closed on Sundays.  I dug out my iPad and checked the map and confirmed I was just a mile away from the shop I was seeking.

When I told the owner of Bearden Bikes that a jogger didn't know of his shop, just the other, he said he'd only opened a year-and-a-half ago and though the other shop was better known it wasn't very customer-friendly, not opening on Sundays and not giving the best of service.  Many of its customers were now his.  He certainly won me over, as he went to considerable effort to pry out the two screws in the bottom of my shoe that held the cleat and whose heads had been worn down by thousands of miles of pedaling.

I felt renewed to be able to clip into the pedal after nearly a hundred miles of haphazard pedaling.  My heart was light as if I'd rediscovered the joy of being on the bike in spite of the rain. That didn't last too long.  By mid-afternoon when it became clear that the forecast of rain all day and through the night probably was right, I made the decision that I would have to find a motel for the night.  I knew my tights and shoes and booties wouldn't dry in the tent and that it would be near suicide to put them on in near freezing temperatures the next morning.  My spirits perked up knowing I'd spend the night in a dry, warm place and have a shower and could wash some clothes.

At 4:30 I asked a police officer in Loudon if there was an Indian-run motel in the vicinity.  He said the nearest motel was five miles away up along Interstate 75, but that it was a Best Western.  I knew that would be nice, but what I wanted was basic and not so expensive. He told me I could find what I was looking for in Philadelphia, the next town seven miles down the road.

The Sunrise Inn had fifteen rooms and catered mostly to residents paying a weekly rate of $180.  Rooms for a night went for $31.35.  It was no surprise that there were no non-smoking rooms.  When I opened the door to my room I was nearly knocked over by the stench of tobacco.  The room was cold, as a window had been left ajar to give it some ventilation.  That was a luxury I couldn't afford.  I've suffered such conditions before, so just turned the heater on high and began draping all my wet belongings on chairs that I snuggled up to the heater.  After I washed my socks and a few other items I made a clothes line out of my bungee cords.

I didn't notice the smell of tobacco again until I laid my head on the bed's pillow.  I had to replace it with one of my own devising.  I next inhaled the stench of tobacco the next day when I wiped my nose with my neckerchief.  Even though I had washed it, as it tried on my clothes line it soaked in the tobacco particulates in the air.  But I regretted in no way my refuge.  I could have survived a night in my tent, but I'm not sure if I would have survived putting on my wet clothes the next morning.  I did have some dry clothes in reserve that could have gotten me to a warm place, but they weren't clothes I'd want to bike in for any prolonged distance.

Vincent, one of my Australian pals who has biked The Tour de France with me, and follows my travels, wrote and asked if it could be "fatal" to be caught in my tent in plunging temperatures, as he isn't accustomed to such cold.  So far my down sleeping bag has been more than adequate.  I have yet to need more than two layers on my torso and none on my legs to stay warm when I've wrapped myself into my sleeping bag for the night.  I could bundle up considerably more if the temperature drops.

My gear wasn't entirely dry after my night in the motel, but since it was still raining it didn't much matter.  The rain was forecast to stop by noon, but then the temperatures would plummet.   I rode non-stop thirty-four miles in the rain to Etowah and its Carnegie.  And awaiting me was Tim, who had driven 150 miles that morning to check in on me.  He knew how miserable the conditions had been the day before, doing a little hiking with Ruthie, and thought I might need some dry clothes. He also had several containers of pea and chicken salads and some pumpkin muffins that he had harvested from a dumpster.  Those I greatly welcomed not to mention the pleasure of his company. 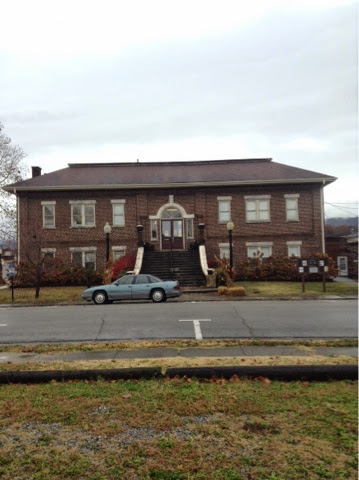 The Etowah Carnegie had had no additions, but it had had its ceiling lowered and fluorescent lights added and flowery wall paper plastered to its walls.  From a distance they made the Carnegie portrait seem larger than normal.  The heating vents were all in the ceiling.  I was hoping there'd be radiators so I could dry and warm my booties and gloves.  The rain  had stopped and a few patches of blue intruded upon the heavy overcast that prevented the sun from providing any warmth.

My original plan had been to head west to a Carnegie in Chattanooga, but with severe cold blowing down from the north, I opted to head south into Georgia.  Ten miles before the border someone slowed alongside me.  At first I thought it might have been Tim, but it was a local who lived nearby and invited me to come stay for the night.  It was only three and I intended to bike another twenty-five miles, so I reluctantly declined.

As I closed in on Chatsworth, where I was to meet Tim, he drove past from the opposite direction and circled back with an update. The owner of a nearby campground said with temperatures expected in the teens tonight he didn't think it was save to camp and wouldn't let us stay.  I had been passing through thick forests that offered premium camping, so I was of no mind to camp where it was authorized anyway, even if it included a heated restroom. The trees were magnificent and inviting. 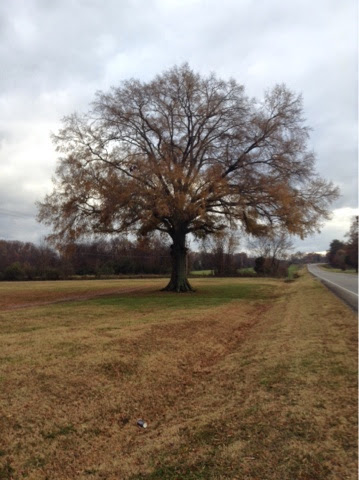 I was already exhilarating at the prospect of spending the night in my tent despite the cold.  After Chatsworth I turned off the four-lane highway I had been following all day onto a minor two-lane road, where the camping was even more plentiful.  Tim too was enticed, but he had the problem of what to do with his car.  I found a perfect spot just off a rough farm road in a smattering of trees ten minutes before dark.  I stopped the moment I hit 83 miles for the day, equaling the most I had had on this trip, but far from my best average speed.  It was under twelve miles per hour, but it had been a good seven hours of riding.  I gave Tim a call to let him know where I stopped, and that there was plenty of room for another, but he regretfully opted for another night in his car. 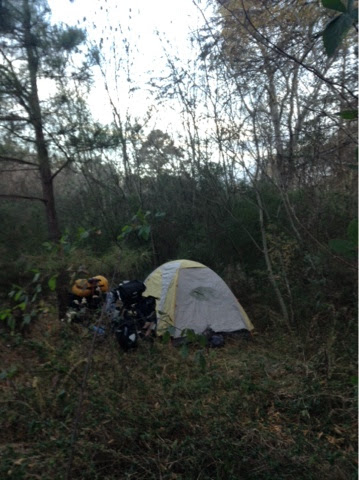 Posted by george christensen at 8:21 AM