I had the option of at least six large outdoor screens scattered around Leeds, the start of the day's stage, to watch the peloton chase around Yorkshire.  I chose the one in a pedestrian mall in the heart of the city, as it was nearest to my escape route out of the city to Sheffield, the finish of the next stage. 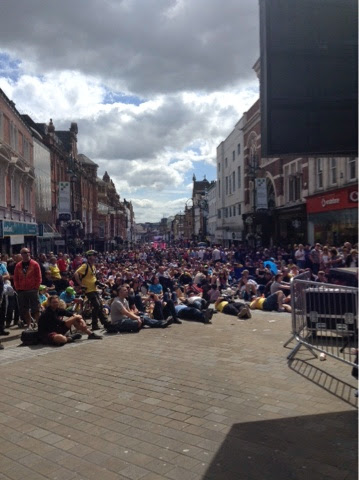 There, as all along the race course, the people came out in incredible numbers.  I was able to wedge myself in behind all those sitting, barely within hearing distance of the commentary by Phil Liggett and Paul Sherwen. The last thing I wanted to do was to stand for several hours.  Earlier in the day along the race course I sat back behind the barriers, not forcing my way up for a close look as the racers passed, letting others who won't have another opportunity the chance. 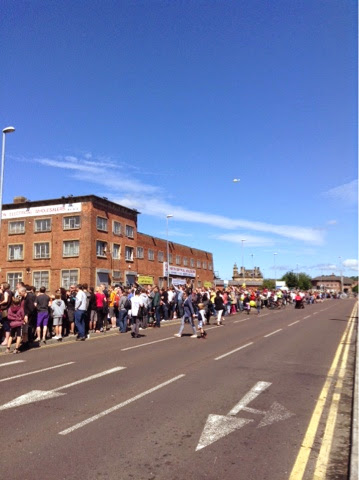 The evening before in Harrogate, where the stage would end, I was told by a member of the army of people readying the spectator viewing area in front of a huge screen in a meadow that they expected "a quarter mil" to be in Harrogate the next day.  That seemed to be rather optimistic estimate, especially when I had seen so many pastures advertising camping along the Stage One route I had just ridden virtually empty.  But the people did come.  The aerial view during the stage of Harrogate had an amazing gathering as did the three categorized climbs on the stage.  That had been the case too in 2007 for the prologue in London and the following day's stage to Canterbury.  The English have certainly earned another visit from The Tour and hopefully not as long of a wait for the next one.

It is always an impressive, breath-taking site to see the dozens of tents and Tour structures in the process of being erected at a stage finish for the many media outlets and the sponsors and dignitaries and Tour officials.  It is a monumental logistical endeavor that must be pulled off twenty-one times in twenty-three days.  It was exciting to see all the familiar structures along the finishing straightaway.  It was nice too to hear the chatter of French and all the Tour vehicles with the steering wheel on the left-hand side of the front seat.  I could have sat and watched the process along with the milling crowds, but I had to get food and find a place to camp.  My day's ride had taken me through small towns with no grocery stores.  It was the first day in England where I hadn't gotten a liter of milk first thing in the day.  I had to rely on my reserves of peanut butter and honey to get me through the day.  I nearly ducked into a train station to charge my iPad, but with it after nine pm, I didn't want to risk trying to find a place to camp in the dark.  I didn't have to go too far before I found a pasture with a dirt track around its perimeter for my night. 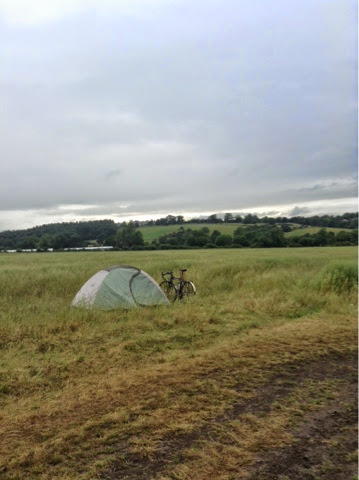 It was a rainy night, but as predicted it ended around seven am, just as I was ready to be on my way.  There was a trickle of cyclists heading to Leeds as well for the start.  They could then cycle the sixteen miles back to Harrogate for the finish.

Nine miles from the city I encountered the closed race course and had to make a four mile detour to enter the city.  I had loads of time, so there was no reason to despair.  The detour road was jammed with people walking and cycling to the course, more than three hours before the peloton was due.  Excitement and anticipation filled the air.  Most everyone was heading to the course, so it was tricky times whether to go to the left or the right of the cyclists and pedestrians coming towards me.  After a mile I was able to turn off on a side road with not so many people, making the cycling much easier.

When I reached the race course in the city it was already mobbed.  I was happy to sit and read for nearly two hours a book on The Tour I had picked up a couple days ago by a British television reporter who has been covering The Tour for ten years--"How I Won the Yellow Jumper" by Ned Boulting."  It was full of stories of trying to get interviews with the riders and the non-stop whirlwind of trying to keep up with The Tour.  His speciality is football.  He knew little about cycling when he was first assigned to cover it and knew no better than to call the Yellow Jersey the Yellow Jumper.

Once the peloton set out on its way I needed to find a place to charge my iPad and had to settle on a McDonalds for an hour.  I hadn't missed much when I plopped down in front of a big screen. 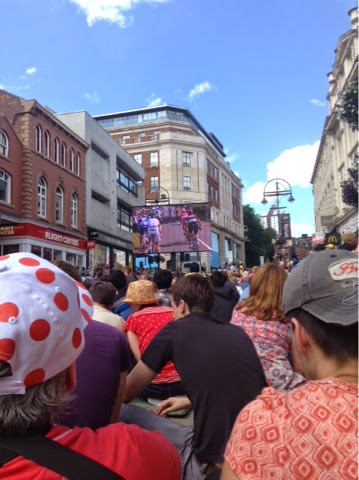 Jens Voight was already off on his own when I started watching the action.  He was first over the last two of the day's three climbs to earn enough points for the polka jersey for a day.  The motorcycle television cameramen couldn't ride beside the peloton on the narrow roads, so most of the footage was of Voigts and aerial shots of the peloton.  There were no close-ups of Froome or Contador or Cavendish or any other of the principals.  We did get a shot of Cav's mother in the grandstand.  Harrogate was her home town.

Voight was caught shortly after the final climb.  When the peloton passed the ten kilometer to go marker there was a flurry of flung water bottles and the pace intensified as it barrelled on to the finish. Cavendish's team took charge.  It almost looked as if they would lead him straight across the line.  But at the kilometer to go mark Cancellera came flying past looking as of he might steal the race from the sprinters.  There was a huge gasp from the very partisan Cavendish crowd.  All hell broke out on the racecourse.  Cavendish's train was decimated as his rivals Kittel and Sagan and others took over the road.  And then there was a huge gasp and cries of "Oh no," when Cavendish crashed taking down several other riders.

Kittel triumphed as he did a year ago on the first stage.  Then the camera found Cavendish slumped against a barrier holding his shoulder with a likely broken collarbone.  Everyone in Leeds and Yorkshire had been counting on a Cavendish win.  We all felt utterly crestfallen, and even moreso that he will likely be out of the race.  The Tour will be much poorer without him.  He once had an explosive sprint unlike any before him.  He was overshadowed by Kittel last year but was determined to regain his dominance this year.  It would have been one of the most exciting stories of The Tour to see if he had.  Whether or not, he enlivens any race he is in.

Posted by george christensen at 5:51 AM

Thanks for taking us along once again, George. Have a great Tour!