A question that perplexes David, as well as me, is why aren't more touring cyclists riding The Tour de France course as we are doing.  We both love it so much and long had the desire to do it, we figure there have to be hundreds more just like us.  We were both quite taken aback in our first attempt that there was virtually no one else doing it and that has been the case ever since.

Even on a day such as today, when the gendarmes seemed to be very determined to discourage cyclists, other than those with numbers on their backs, from trespassing on "their course," I am undaunted in my joy of riding the course.  Generally I'm allowed to keep riding until fifteen minutes before the caravan is due to arrive, which is two hours before the racers.  But today I was halted before a town that was about a mile long ninety minutes before the caravan was due.  An officer said bicyclists weren't allowed through the town.  I would have to bypass it if I cared to keep cycling.  I took the detour he suggested, but then came back into the town about half-way through.  I was halted again, but told I could continue if I pushed my bike.  Shortly after that I was told it was okay to ride on the sidewalk.

When the sidewalk ran out on the edge of the town I resumed riding and none of the gendarmes reacted.  It was clear sailing for fifteen minutes with no other traffic before I was halted again by an older, less hostile gendarme, one of those who don't  look as if they are an authentic gendarme, but rather a clerk who has been given a uniform to act the role at one of the less important points on the course.  I was able to reason with him, as he had a cordial personality that wasn't intent on enforcement, and was given permission to continue as long as I stayed at the edge of the road as I was doing.

Five minutes later though a police car with two officers roared up beside me and most sternly ordered me to stop riding, then and there.  They seemed like a regular patrol on the course who ought to have known me.  Officers in tandem on motorcycles pass at regular intervals patrolling the course on every stage for hours. It almost seemed as if these guys had it in for me, as if I shouldn't have been on the course since I was initially stopped before the off-limits town.  There was no debating with them.   I pointed at a cluster of trees and rows of cars just ahead and said I'd stop there.  A gendarme happened to be amongst them.  They stopped and told him to keep an eye on me.  After they left he came over to be to make sure I had no plans of sneaking back on the course.

It was still an hour before the caravan was due, ridiculously early to be stopped.  It meant I would be quarantined for three hours, an hour longer than yesterday and what is the norm.  Such a hassle is enough to drive one away from wanting to cycle the course.  Losing three hours in the middle of it makes it difficult to do the miles one needs to keep up.  If I wasn't happy to be on my bike until ten p.m. night after night, I would have been spit out the back long ago.

These gendarmes don't realize the odd cyclist on the course isn't interfering nor distracting from The Race.  If any thing they are enhancing it. People take delight in seeing a touring cyclist doing something they can respect and desire to do themselves and are continually cheering me with "bravos" and "bon courage" and "alleé."  The enthusiasm we generate is one of the reasons David so much thrives on the experience.  Maybe if we wore a "Vive Le Tour" jersey or flew such a flag the gendarmes would understand and rather than interfere would give us support, handing us bottles with cold water and energy bars and give us a draft. 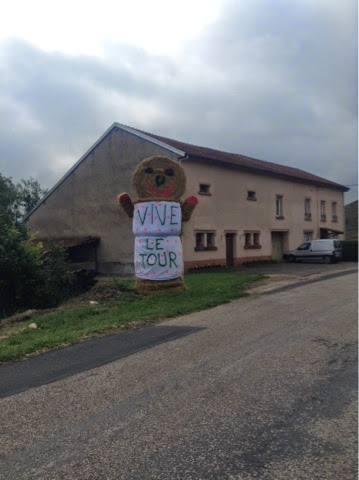 I had been having another blissful day until that premature noon halt.  I was on the road by 6:30 effortlessly gliding along.  Within minutes the trio of yellow vans, who put up signs warning of hazards such as round-abouts and speed pumps and the narrowing of the road, came along.  They had enough marking to do that for the next two hours we were keeping the same pace. 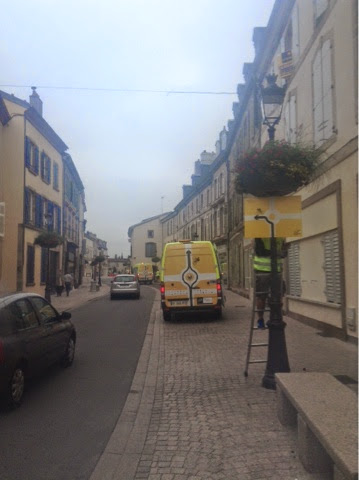 It was a  Saturday morning, but only two other cyclists passed me.  Occasional Tour vehicles passed, including a car distributing Skoda cycling jerseys of the Tour's car sponsor.  Over the years teams and other sponsors have passed out a handful of jerseys.  Skoda is a long-time sponsor who in the past just gave out white floppy hats.  Jerseys are always a prized item.  I could have joined the line when it stopped just ahead of me, but I have more jerseys than I need.

The great menace of The Tour, guys selling mini-cellophane French and EU flags for one euro, were on the course.  The gendarmes at times run them off.  Skippi too battles them, but Skippi has yet to make an appearance this year making it less difficult for these guys.

After a couple of hours I passed through a town that had decorated itself with pink bicycle shrines. 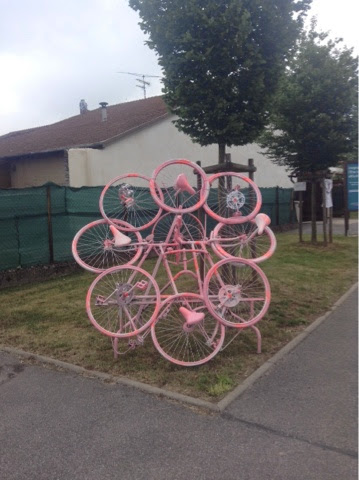 Some were just a hodgepodge of bike parts. 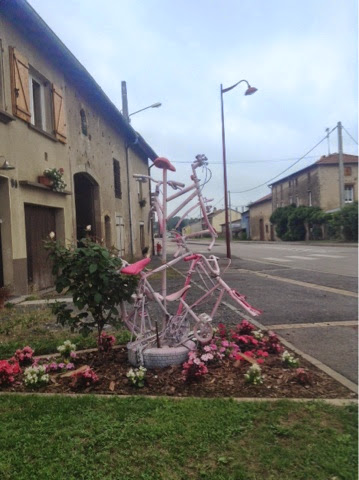 During my prolonged spell in quarantine I actually took a nap, a Tour first for me.  After I resumed riding I continued for an hour before stopping at a bar to watch the final hour of the stage.  The French rider Blek Kadri in the five-man breakaway left his companions on a climb with fifteen miles to go and was able to hang on for the win.  It was the first French win this year.  The announcers were ecstatic.  He was plopped down in front of a camera a minute after finishing for a quick interview with them.  They offered no question just, "Magnifique," for doing their country proud, and he responded with an unrestrained response saying how happy he was.  Shortly before he crossed the line his team director pulled up beside him in his car before he had to turn off the course and clasped his hand like a proud father.

The rest of the peloton finished one by one separated by a couple seconds each so the announcers had the rare opportunity to name each of the first ten.  Contador managed to shake off Nibali on the final short climb and beat him by three seconds.  It was a symbolic gesture of who might be the stronger on the climbs.  Porte found himself and finished just after Nibali.  Maybe he can give Sky some hope for winning The Race for the third straight year and with a different rider each time.  That would be quite a feat. Talanksy crashed again as the finish neared and lost enough time to drop to sixteenth overall.  For the first time there is not an American in the top ten.  Van Garderen in thirteenth is now ahead of Talansky.  The other American hope, Chris Horner is twenty-first.

I continued on to the finish in Gerardmer arriving at nine pm.  It is also the start city for the next stage.  No course markers were in place, though it was no trouble finding the route in this scenic mountain town beside a lake.  I camped just before the start of the category two climb that comes early in the stage.

Posted by george christensen at 2:34 PM