With a 125-mile Rest Day transfer from Nimes to Carcassone, almost as long as today's 139-mile stage, my game of playing tag with The Tour strictly under pedal power couldn't include lingering in Nimes for today's stage finish.  I was, in fact, some forty miles down the road, trying to negotiate my way through Montpelier, as the peloton wrapped up its day in Nimes. I was so focused on my business at hand, aided considerably by having made a reconnaissance of Montpelier at the end of May, that I wasn't paying attention to the time and missed it. I was partially distracted at how well I remembered the way, avoiding the two crucial mistakes I made the time before, and only needing to resort to my GPS device twice this time, compared to about twenty before.

My subconscious could be to blame as well, as it knew this was an utterly inconsequential stage that some sprinter would win and without Cavendish chasing Merckx's career record of stage wins and with Kittel having lost his early mastery of the sprint and Greipel not being in form and the points jersey not being an issue, the sprint stages had become somewhat meaningless with no bearing whatsoever on the outcome of The Race.

That is not an entirely fair statement to make, as every stage of The Tour carries the magnitude of a Classic, but my own personal race, at least for this stage, had assumed more importance to me.  I had no moments to spare if I wished to have more than a quick hello and goodbye with Janina at the small village north of Carcassone she has spent the last month at with a handful of other writers and artists working on projects of their own at a retreat called La Muse.

So I missed Kristoff winning his second sprint.  He's the only Norwegian in The Race this year.  There has been a strong Norwegian fan contingency waving their flag at The Race the past few years, going back to Thor Hushovd, a Green Jersey winner and wearer of the Yellow for over a week with Garmin one year. The Norwegians love coming to France and always express great enthusiasm for being at The Tour, so it is good for The Race to have one of their countrymen doing well and to keep them coming.

But the fast-charging peloton left another Garmin rider utterly shattered and in tears.  Jack Bauer of New Zealand, riding in his first Tour, was just caught at the line after being in a day-long breakaway.  He couldn't have been more devastated.  I'm sure Christian had some very sympathetic words for him.

I was lucky to miss the deluge that hit the peloton, as I was happened to be passing through a town and could seek shelter as the sky turned pitch black and then let loose.  Back down on the flats, after a couple of days on the Massif Central, and approaching the Mediterranean, I was once again cycling through wine country.  One town even transformed one of its roundabouts into a mini-vineyard. 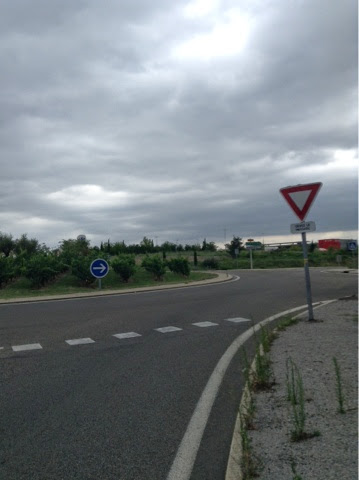 I had a fine Sunday ride on quiet country roads, allowing me some more book-listening time.  Chris Froome's autobiography, "The Climb," written with the assistance of David Walsh, author of several books on Armstrong's doping, just became available as an audible book.  The book itself was released
shortly before The Tour and had some harsh comments on Wiggins, some saying that contributed to Wiggins being left off the Sky team.  Its a fourteen-hour book and is told in chronological order, so the 2012 Tour and the Wiggins issue has yet to come up.  The first few chapters are devoted to growing up in Kenya and South Africa, raised by divorced parents who live in the two countries.  Froome had a preference for Kenya, partially because that is where his bicycling mentor, a dread-locked black African racer, lived and where he was born.  When his father told him when he was fourteen that he would have to join him in South Africa to go to a boarding school, there were tears.  Leaving his two pet pythons behind was one of his sorrows.

Froome wasn't an instant success as a racer, but he had great ambition and loved to train hard.  He didn't receive much support from the Kenyan cycling federation though he represented them at the Commonwealth Games in Melbourne in 2006 and caught the eye of Brailsford and others for his seventeenth place finish in the time trial on sub-standard equipment.  Listening to his story kept me going right up to dark at ten p.m. and could have kept me going even longer.  I'm only eighty miles from Janina, so am hoping to make it in time for dinner tomorrow.  The only question is will I be surprised by David again on this Rest Day too.
Posted by george christensen at 5:45 AM

George i was at the turn of thatTT at the Com games, it was at Mentone my home suburb, the guy turning the riders walked down the road a bit to turn the cars a little sooner than the riders and i saw several riders turn early, probobly oblivious to the error.
Plenty bab weather for you this year, what happened to dave
hooroo vincent

Vincent: Here's David's report on what happened after we parted:

No more meetings this year, I'm home in Bremen and returning would be just ridiculous, could be only for seeing the TT and the rest of the stage before, afterwards home through Paris.

After we parted I asked the woman on the parking across the street how far it could be to the camping, very nicely she drove me over, I had Pizza and beer and stayed the night, next morning hitchhiked to Lons de Saunier to a bike shop. A repair was, of course, out of question, even having the frame welded would have never given me a safe feeling on this bike again. I contemplated buying a new bike there, a kind of hybrid between a race- and a touring bike, narrow rims, straight handlebars, easy to fix my luggage on it, sufficent gearing, would have done well, but price was a bit high for buying it on the spot, furthermore I would have had to disensemble the old bike to send home the valuable parts (wheels, Campy-triple and shifters, brakes etc.). Right now I think I should have done it anyway, would have given me a good three more weeks of touring, of looking further at my legs and what's possible with some training.

Will probably call the office and ask for work today, even when my heart tells me to go back on the bike, forgetting about the money, maybe I should do the Vuelta, not too many people there, might be easier to get in touch with race and racers.