Penny Lane and Its Roundabout 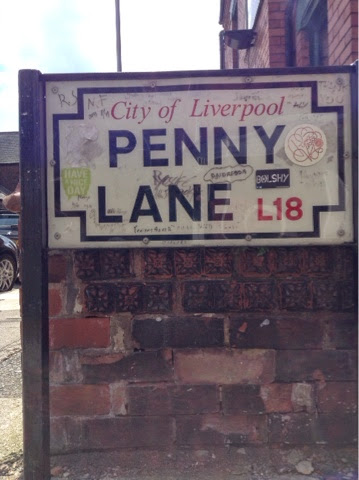 Even if Penny Lane hadn't been right on my way, sandwiched between two Carnegie Libraries less than ten miles apart in south Liverpool neighborhoods, I would have most certainly made it one of the prime destinations of these travels.  I do not search out Beatles arcana, otherwise I could have spent a couple days in Liverpool, the home town of John, Paul and George, but I am a full-fledged devotee of roundabouts.

The Penny Lane roundabout could well be the most famous and most photographed roundabout in the world, other than that of the Arc de Triomphe in Paris, thanks to "Penny Lane." It includes the lyric "Behind the shelter in the middle of  a roundabout," making it perhaps the only song, or at least top-of-the-charts hit, to mention a roundabout. This Paul McCartney written song was the 13th Beatles' single to go to number one in America, though not in Britain, falling one slot short.  Fans from around the world come to photograph its roundabout along with countless other Beatles' sites in Liverpool, including its airport, named for Lennon, as unlikely an airport name as the Federico Fellini Airport in his home town in Italy.  The shelter was at one time a shelter for a bus stop.  There is still a bus stop at the roundabout, but the shelter is now closed after serving as a restaurant for a while with the name of "Sgt Peppers Bistro." 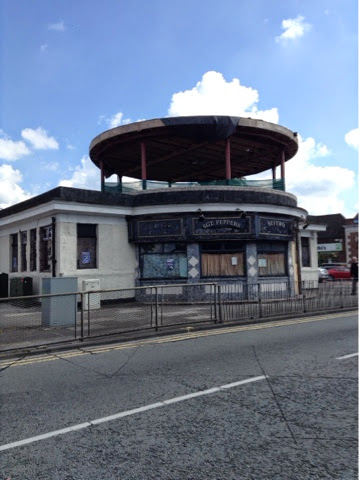 Lennon's childhood home is just a few blocks from the roundabout.  It was a frequent meeting point for the young Beatles.  It is in a somewhat quiet residential neighborhood of row houses and small businesses with a church right across from it.  The barbershop the three local Beatles patronized and is mentioned in the first line of the song is nearby, as is a photography shop Paul liked to hang out at and several banks.  If I cared to be ushered to them I could have signed up for any number of tours.  A two-hour walking tour was advertised on a small poster plastered to the boarded-up shelter. 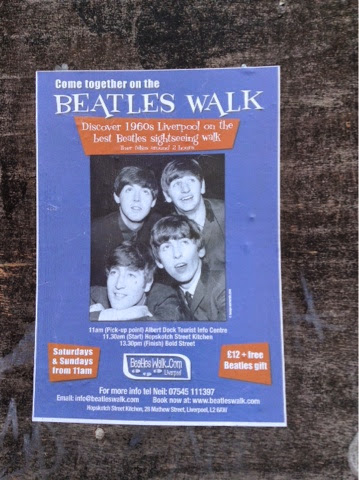 On-line one can find tours of four, five and eight hours going for upwards of $150.  Though no one else came along with a camera while I soaked in all the ambiance at this vortex, I could feel to my core the lingering emotions of the many, many Beatles fans who had preceded me.  It was a powerful experience that stuck with me all day, undercutting the charge I usually get at the four Carnegies that filled the rest of my day.  There was a string of them to the east of Liverpool towards Manchester and Leeds.

That wasn't the only significant roundabout of the day.  As I entered Wigan in search of its Carnegie I came upon a rare English roundabout decorated with a sculpture, just as I frequently encounter in France. 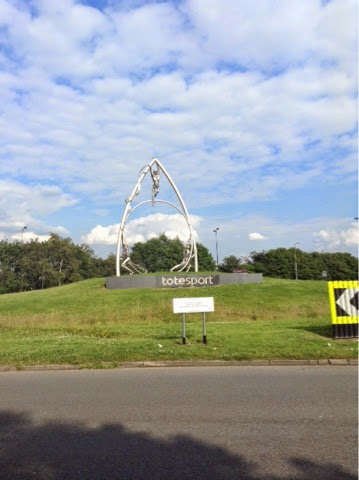 The vast majority of those in England are empty and not even landscaped, almost an eyesore knowing what potential these palates offer and how they are going to waste. 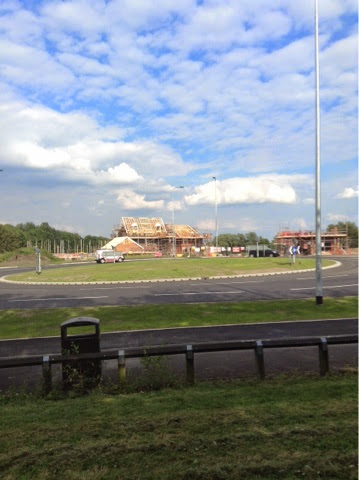 It was exciting to see a huge sculpture in a roundabout, perhaps an indication that the English were becoming cognizant of what a great opportunity roundabouts offered to brighten their environment and provide a venue for artists to display their work and touch the souls of the car-entombed and make them less menacing drivers.  My hopes were deflated though when I noticed a sign in the roundabout saying it was available for companies to advertise itself, as this sculpture was doing.  It was a version of selling the naming rights to stadiums, as has become so commonplace in the US.  Roundabouts as billboards, rather than roundabouts as canvases for art.  The mercantile interests prevail.  What a horror it would be to see statues of Ronald McDonald under Golden Arches in the middle of roundabouts.

The French should be mounting a boycott of England and all things English until a law is passed to outlaw the desecration of the roundabout with commercial interests.  And while they're at it another law ought to be passed mandating a certain percentage of highway funds shoukd go to roundabout art, just as a certain percentage presently goes to bicycle related projects.  And I had been having such a wonderful day biking down the few blocks of Penny Lane, and hopping from Carnegie to Carnegie. 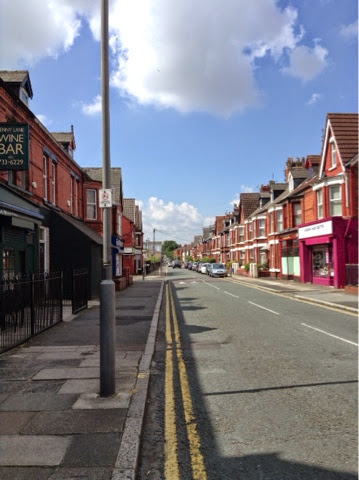 The first came in Runcorn at eight a.m. before I crossed the River Mersey over to Liverpool. It was only the second of the twenty-six I've seen so far on this trip that was closed and empty.  It was in the middle of the block on a wide side street.  Though it shared walls with its neighboring buildings in the Old World style, as several of these Carnegies have, it was easily the most prominent building around, if not in the whole town. 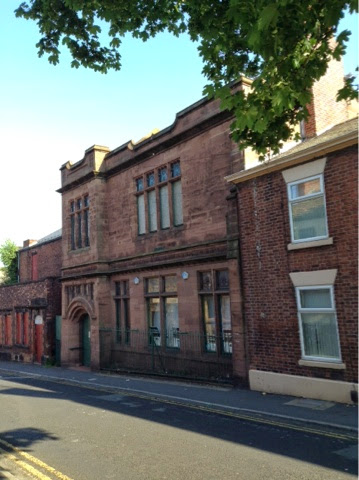 It didn't go in for any fancy lingo, acknowledging Carnegie with a simple "The Gift of Andrew Carnegie 1906" inscribed over the door just above "Free Library and Reading Room," a designation rarely seen. 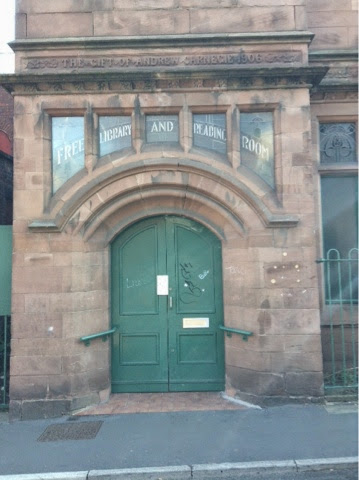 The Carnegie in Garston was more of a house with Tudor style architecture.  A plaque just inside the door acknowledged Carnegie's "munificence." 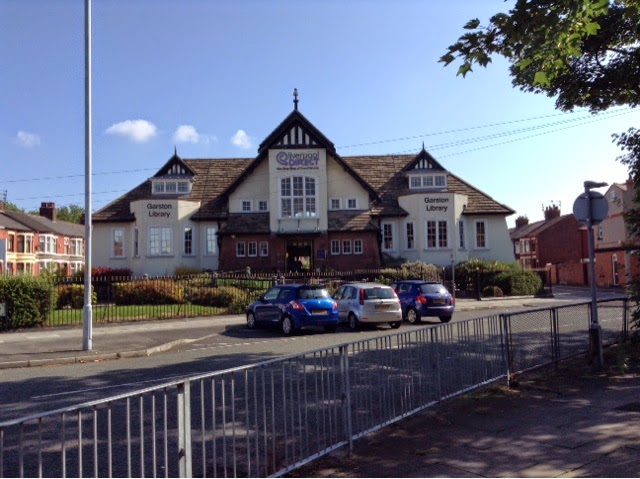 The librarians were much less generous than Carnegie.  When I asked where I might plug in my iPad, the librarian at the front counter reacted with horror, saying, "Oh no, you can't do that.  It might cause a power outage," the most ridiculous thing I'd ever heard. Next I tried the reference librarian.  She too was adamant about not doing such a thing.  These people weren't being very nice and even less so when I asked about using their computer.  "Do you have a local address?" one asked.

"I know that,"  she said, bursting in to laughter, as did the person beside her.

I was really quite desperate to charge my iPad, as it was down to two per cent after not being able to do any charging the day before, a Sunday, and running it down having to check for directions all too many times as I approached Liverpool. I asked another librarian shelving books about electricity.  She said to go upstairs.  And I did and I accomplished what I needed to do.  Hopefully Janina will be so fortunate if she persists in trying to get a refund for a Eurostar ticket an agent in London refused her when she tries in Paris.

The Carnegie in Sefton Park, just before Liverpool, was another Tudor style house.  And it too advertised itself in a unique way as a "Lending Library."  I biked right past it, as it was camouflaged by trees and had no warning sign of there being a library ahead.  I was told it was across from a Tesco, but it was a small neighborhood version of the large supermarket chain and I was too focused on the thickening urban traffic and missed that too.   There was no charging at this library as it was closed on Mondays and Tuesdays, having the least opening hours of any library I've come upon here. 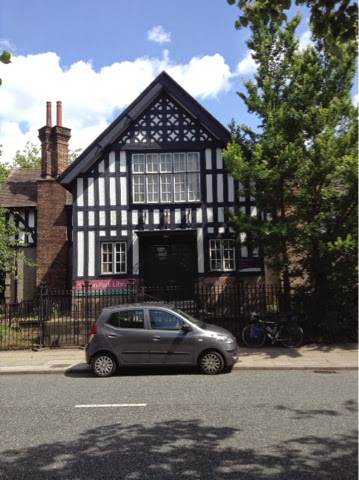 That was it for the Livepool Carnegies.  The next was twenty miles further in Newton-le-Willons.   It was topped by an ornate weathervane, a common feature of these English Carnegies.  I can't say much about their interiors.  They have been community hall antiseptic with basic metal bookshelves and humdrum tables and chairs.  The American Carnegies are usually enhanced with fine wooden craftsmanship--floors, shelves, desks and often a grand circulation desk.  They offer the comfort of a men's club den. 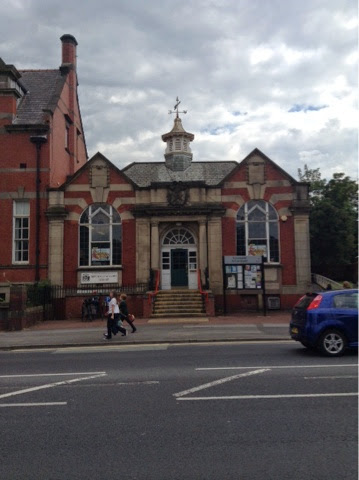 The Wigan Carnegie was a four-story edifice so significant to the city that it named the street after the library.  It was constructed of red stone similar to the city hall just across the street.  I had to ask where the library was even as I stood in front of it, as it wasn't identified on its exterior facing Library Street, just on the side street where its entrance is now located. 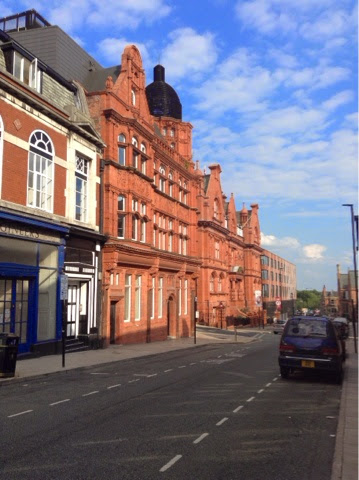 The Westhoughten Carnegie was easy to identify with "Carnegie Library" chiseled over its entry with a flourish just below a shell.   Also above the entry was posted a sign that the library had a liquor license, as it holds functions in its theater where alcohol is served. 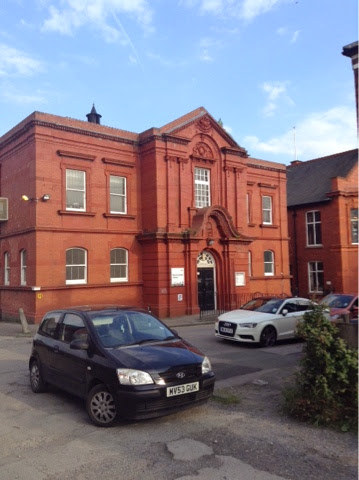 I'd had a bonus Carnegie two days before in Wales before this flurry.  It came in Bangor at the end of the day after I'd taken the ferry over from Dublin after visiting three of its Carnegies.  It was clearly Welsh with "Library" written in English as well as Welsh (Llyfrgell) on the front facade of this stately symmetrical building with a small dome over its entry.  I continued to just outside of town, camping behind a cricket pitch in a clump of trees. 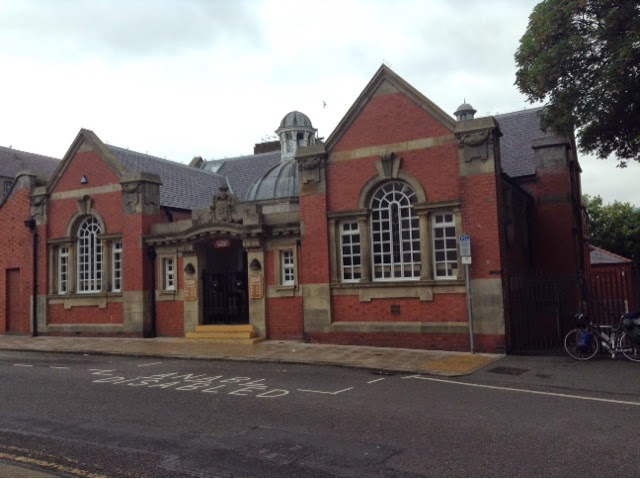 Posted by george christensen at 2:42 PM

Do you ever worry about ticks when you go wild camping?

Stuart: I have pickhed up a few ticks in France over the years but none so far in England. I have just plucked them out with my tweezers and have had no ill effects.

Great pictures, George. Keep them coming. And about the ticks, yes, to me it is becoming a big issue, as I have developed my first major anaphylaxtic reaction to them ever. I now avoid high grass in the summertime.