The traffic has thinned a bit now that I'm headed north away from London, but not as dramatically as the flag index would indicate.  I only found two today along the road after sixteen yesterday and nine the day before, fallen off cars demonstrating their World Car fervor.  What I'm going to do with them I'm not sure.  I gave the seven I found my first two days to the Dodds.  I promised I would have another fifty for them when we meet up again in Ireland next week that they could make a quilt of or string them up across the front of their house.  They didn't think it would be so good to be displaying the flag of England over there. 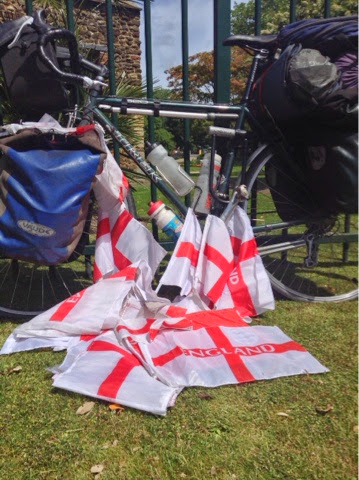 Four years ago when I biked through Germany during the World Cup I had a similar bounty of flags.  I saved them until The Tour began and then distributed them to German fans along the road.  I could do the same this year when The Tour returns to France, bequeathing them to English fans.  There will certainly be plenty of them rooting for Froome and Cavendish and possibly Wiggins.

I've given away several flags already to friendly folk who have given me directions.  They have been delighted, as if they had won a prize.  They are invariably pleased to begin with that I have a question for them and that they have an answer.  It seems to be a national pastime to demonstrate one's knowledge.  Rather than karaoke, bars have a weekly "Quiz Night."

On occasion when I've asked a pedestrian for directions, another will pause to eavesdrop and then offer his two pence's worth of opinion.  Almost without fail I'll eventually be asked, "Are you Canadian or American?"  When I say I'm from Chicago they'll pipe in with "the Windy City" or "Illinois," hoping for a couple of bonus points.  People are happy to have a prolonged chat.  Get these Brits out from behind the wheel of their car and they are wonderful.

Out on the road though, its hard not to regard them as demons, whizzing past me one after another, hardly a car's length between them, like a non-stop metronome.  They can't give me as much space as they might like because the equally relentless oncoming traffic doesn't allow them to swing over much. There is so much congestion there are regular signs warning of possible "queues" ahead, showing three cars bumper-to-bumper. 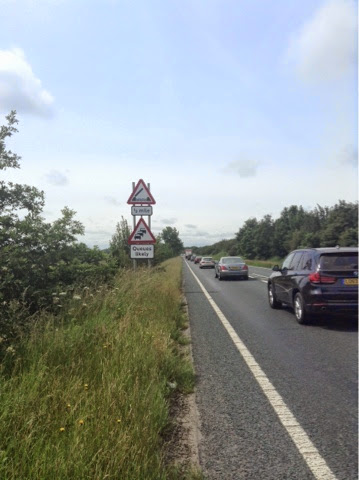 An equally common sign warns of speed cameras, a necessity to tame the heavy-footed. 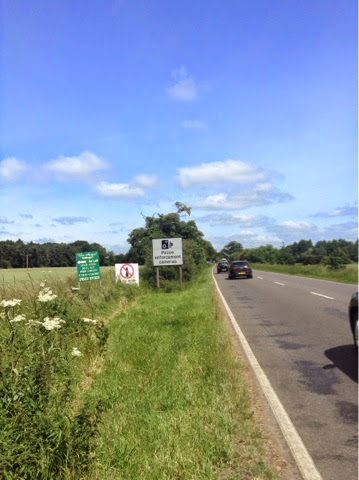 I welcome every double-decker bus, each reducing the congestion by one bus. Now someone needs to invent a double-decker car. I could escape the roadway and doodle along on the occasional bike paths, but they are almost as treacherous as the road with their rough pavement and overhanging brush poking at me as I pass.  And they hug the road so closely the roar of the traffic is hardly diminished. 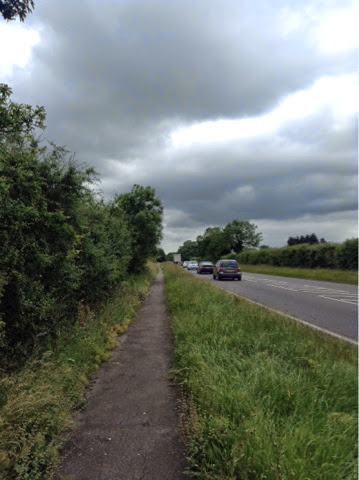 After eight Carnegies my first three days in the UK, I only added one more these past two days.  It was in Southend-on-Sea at the mouth of the Thames, fifty miles east of London.  It was a long way out for a single Carnegie, especially with all the London coming-and-going traffic, but it yielded a great harvest of flags and since these are training miles, I don't need them to be scenic nor a gateway to some ultimate destination.  But a Carnegie is always a worthwhile goal.  I am happy to lay my eyes on each and every one of them.  It is always a memorable moment when I first spot it, heightened by the miles and miles of anticipation.  This was another architectural gem, grand and statuesque.  It no longer served as a library, but continued a prominent existence as a museum/planetarium in the town center a couple blocks from its train station. 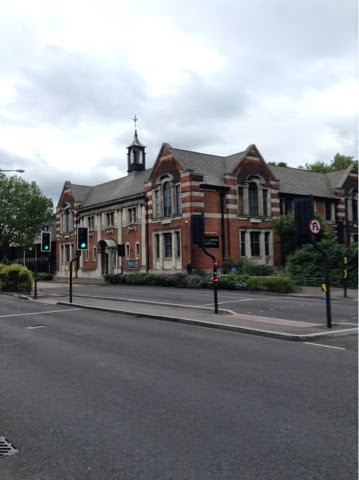 The next Carnegie was seventy-five miles away to the northwest in Royston, or so I thought.  When I reached the town center I asked a woman for directions.  She said it was just two blocks away on the left and described it as a "plain building," with a tone of irritation as if she were on the losing side of a battle to preserve the old Carnegie as the town's library.  She was holding two big bags of groceries and had been bustling along, so I didn't detain her to hear more.

She was most correct calling the library "plain."  It was de rigour mall architecture that could have housed a hair dresser or optician or insurance salesman.  When I asked the librarian where the old Carnegie was she wasn't aware that the original library was a Carnegie.  While I sat recharging my iPad  I checked Wikipedia to see when the Carnegie had been replaced and learned that there had never been a Carnegie here in Royston.  It was actually Royton, a town north of Manchester, too small to be listed in the index of my map, so my eye didn't pick up the "s" when I scanned the index.

I didn't have to be too frustrated, as I had to pass through Royston on my way to Cambridge, twelve miles further, to scout out the start of stage three of The Tour and also to give the famed university town a look.  Tour banners adorned light poles all along the mile-and-a-half route the peloton will follow through the heart of city, past many of its centuries old buildings, before it commences racing.  The inner city was bustling with students on bikes.  Hundreds were parked in bunches, many just leaning up against buildings locked to themselves.  This city of 123,000 inhabitants, the 54th largest in England, oozed history and vitality.  I will be eager to return, not only for The Tour, but some time just to hang out in this city that celebrated the 800th anniversary of the founding of the first university there in 1209. 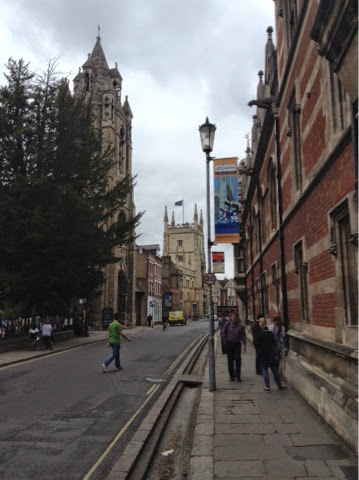 The peloton will set out from Parker's Piece, a huge park in the town center.  The tourist office had a walking map of the route past the many historic sights.  The sidewalk beside the starting point had been marked. 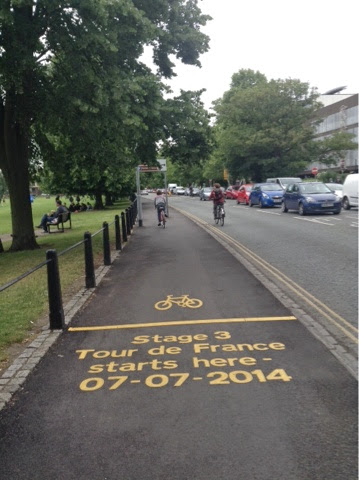 A policeman on a bike directed me to it.  I asked him if he would be on the course during the stage, hoping he could tell me when it would be closed down to cyclists.  When it last visited England I was evicted from the course three hours before the peloton was due to pass, an hour sooner than in France.  He said he knew it was going to be a hectic day and he had put in for time off months ago so he could be faraway in the country away from all the hubbub.  He had enough seniority that his superiors couldn't force him to work that day, he was happy to say.

He wasn't much of a cycling fan.  He had no opinion on whether Wiggins should ride in The Tour, as the Sky director hasn't decided yet whether to include him on the team, fearing friction with last year's winner Froome.  No one I have asked, cyclist or not, has had an opinion on this issue, even though Wiggins was such a national hero when he became the first Englishman to win The Tour in 2012 that he was knighted and also given the honor of lighting the Olympic torch.  If I were to ask anyone though about any member of England's World Cup team, they'd launch into a heated diatribe, either why that player was the most important member of the team or why he ought to go, as I hear on the radio.

Cycling remains a very minor sport in England.  There was no mention of the just completed Dauphine-Liberé, the final tune-up for Froome before he begins his defense of his title, on the sports stations yesterday, even though Froome held its Yellow Jersey for the first five stages and was hoping to regain it and win the race on the final stage.  I was most interested in learning the result.

The World Cup of course dominated the sports news, but coverage was also given to golf, tennis, rugby, cricket and Formula One, but not a word on cycling.  At least one of the newspapers at the library had a story on the race, though it mostly made excuses for Froome not winning it, actually dropping from second to twelfth on the last stage, than focusing on the dramatic win by the American, Andrew Talansky of Garmin.

Its a monumental win for Talansky.  He suddenly becomes someone to take seriously.  His tenth place finish last year in his first Tour was somewhat of a surprise, vaulting from thirteenth with a strong finish on the final mountain stage, actually flying past Contador on the last climb.  He may not be a flamboyant rider, but no one has more grit or determination.  If it had been warmer today I would have worn my Garmin jersey that I have been saving until The Tour start.

Posted by george christensen at 3:15 PM

George i still have a german flag you gave me, it hangs in the shed with other prize mementoes.

Is it my imagination or are the pommy carnegies more ornate than the US ones ? vincent

Vincent: You are correct. So far these Czrnegies have been more grandiose than those in Americs. The Americsn are atill striking and magnificent buildings, but on a smaller scale.