One of the largest towns on the nineteenth stage of this year's Tour is Condom with a population of 7,000, but it was not large enough for a McDonald's, even though there are 1,300 of them scattered around the country. My month Internet package for my iPad had expired and I was in search of WIFI until I could renew it,  not such an easy thing to find in France.  McDonald's is one of the rare places that supplies free access. One might think they are everywhere with 1,300 of them scattered around the country and based on the comment from a character in one of the seventy plus movies I just saw at  Cannes, that the two biggest employers in France are the army and McDonald's, but that isn't so.

The peloton will pass through Condom, a cross-roads city on the banks of the la Baise river, forty-five miles after it sets out from Maubourguet, just north of Tarbes and  the Pyrenees, on July 25.  All will be looking forward to this relatively flat 130-mile sprinter's stage after three days in the mountains.  The stage will end in Bergerac, fifty miles inland from Bordeaux, and will be the next day's start for the climatic time trial that will settle all the placings. 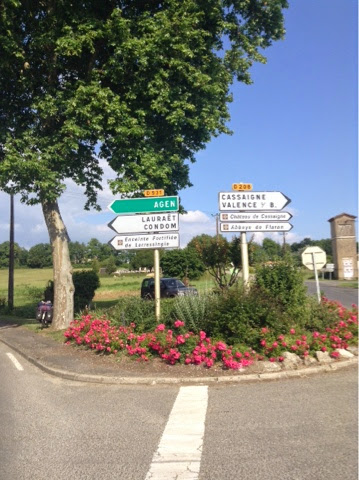 (Another mini-tableau of la France profounde--flowers, a plane tree, signs to historic sites and in the distance a walled cemetery, one of my sources of water.)

It is the first of this year's stages that I have been able to ride with a detailed route sheet tracing the exact route of the peloton, thanks to the tourist office in Maubourguet.  Although it is less than two months, fifty-four days to be precise, before The Tour and its entourage of thousands will come barreling through these parts, there was no evidence along the route or in Maubourguet, other than a small poster and some brochures in its tourist office, that this monumental event is imminent.

Not even the round-about leading in to Maubourguet had been decorated with a Tour theme, just a very bland, over-sized billboard stating that Maubourguet was a nice place to visit.  Being a first-time Ville Ètape, it may not be fully aware of how to respond to this honor.  And it may be maintaining its reserve as a stop along the Camino de Santiago.  As I sat in front of the town cathedral, where the peloton will set out from, eating a pâté sandwich, several pilgrims in shorts and hiking boots and shells dangling from their backpacks wandered in all with the uplifted look of someone engaged in an activity that was giving them much satisfaction.

Once I commenced riding the Tour route I could feel the roads already tingling with anticipation.  Weary though my legs may be, they suddenly felt energized.  I knew I had to be sharing that veneer that shone on the faces of the pilgrims.  It took little imagining to visualize the throngs along the road and the level of excitement that would fill the air when The Tour comes to town, one of the biggest events in the town's history.  As wonderful as it is cycling any of the roads of France, the most wonderful of all is those roads that The Tour will be consecrating.  To be on The Tour route, even weeks ahead of it, is one of those ultimates of cycling.

The 450 miles I pedaled across southern France from Cannes in the past week would delight any touring cyclist, but for me they were just a pleasant prelude to being on The Tour route. I welcome very small town WWI monument, each unique, but all the same. 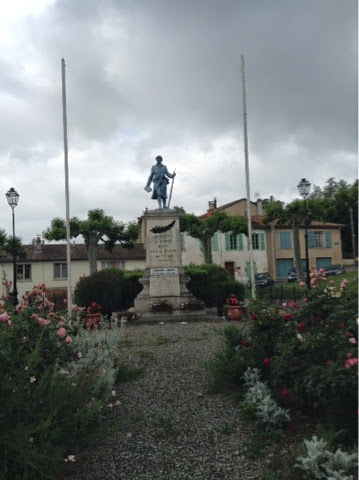 The crucifixes too are an integral part of the landscape, though they are rarely in tandem with the war memorials. 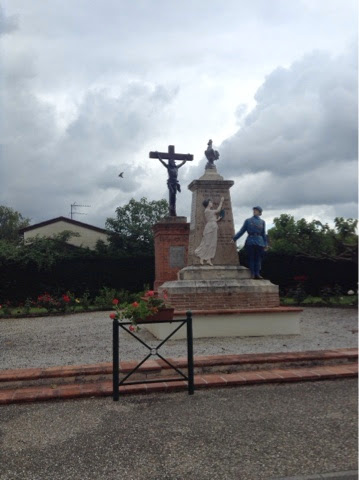 But when I'm on The Tour route, all else becomes secondary.  Suddenly my thought becomes alive with Tour memories and associations, as if I had grown up in France and had been brought to the roadside as a toddler with my grandparents, a French tradition that I see reenacted all along the route on Race Day.  It is indeed a vital thread in the fabric of French culture.

My racing immersion has been augmented by an audible book on the history of the Giro d'Italia I've been listening to as I've pedaled along.  It is a two-volume set covering the Italian version of The Tour year by year with a condensed version of every race from 1909 to 2011--twenty hours of listening pleasure. It was written by Bill and Carol McGann, who had previously written a similar book on The Tour de France, though it has yet to be audibilized.  There are dozens of books on The Tour in English, but not many on the Giro.

It was a good book to listen to, as its written very conversationally with personal asides such as, "I counted thirty-six spooks on Merckx's bike," and "I would have spent good money to be at the team meeting that night," and "As we say out here in the Ozarks, that dog don't hunt."  The McGanns are ardent enthusiasts of the sport, calling quite a few stages among the greatest ever.  They devote a considerable amount of harsh commentary, though, to all the doping episodes through the years without coming to the conclusion that its simply something a fan must accept, just as the racers come to realize that they can't compete without some version of artificial assistance.  They acknowledge that doping has long been such an intrinsic part of the sport, so much so that The Tour de France rule book in the 1930s stated that the racers would be responsible for their own doping and that The Tour would not provide it, as they did their food and lodging.

The Giro, getting its start six years after The Tour, has always been secondary to it and generally a few years behind in adopting its innovations--a leader's jersey, individual and team time trials, a points competition and so forth.  It is unique though in allowing a woman to compete one year (1924) and in celebrating its last place finisher for a series of years with an official jersey and prize money.  It has had a Grand Départ in France (Nice in 1998), while The Tour de France has only had mid-race starts in Italy.

The Giro has never had the international appeal of The Tour and for decades was largely contested just by Italians, sometimes with a field of nearly three hundred riders.  The Tour has had non-French winners from its earliest days, while the first foreigner to win the Giro was the Swiss Hugo Koblet in 1950.  The Italians  are much more nationalistic than the French.  When Eddie Merckx was dominating racing and winning the Giro five times in the early '70s, the Italians lost interest in their race and it was no longer televised live, just a delayed highlight package.

One of the biggest differences between the two races is the weather.  The Tour taking place in July generally has the benefit of near perfect balmy conditions.  The Giro though in May frequently has to contend with snow in the mountains leading either to epic stages or to controversy over whether or not to cancel or shorten a stage.  What to do often depended on whether an Italian in contention was a good climber or not.  There are many examples of favoritism by race officials to local riders.  The Italian fans, too, matter-of-factly push Italian riders up climbs, unheard of in The Tour by the French for their riders. It has been so flagrant in the Giro that riders have been given time penalties for being pushed or entire stages have been annulled.

As I have been pedaling along listening to these accounts, I would sometimes forget I was in France and think I was in Italy.  I couldn't help but marvel that I had been drawn into the world of audible books and what a pleasure it was. I may resist technology in most things, but this slender little iPad continues to enrich my life in ways I never could have imagined.  Not only with audible books, but actual books as well, along with its precision GPS capabilities and photo taking and Internet access and on and on.  I hardly feel as of I'm in the wilds when I penetrate into the forest at night to camp. 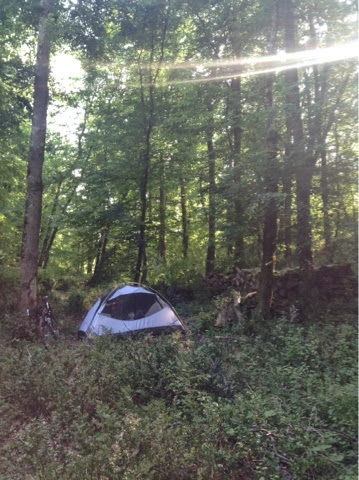 Posted by george christensen at 7:11 AM