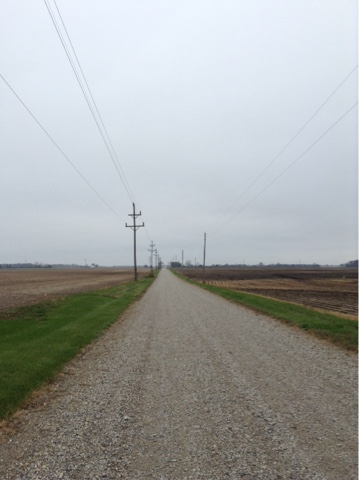 The fold of my Indiana map happened to cut across Mount Vernon on the index portion of the map, so I didn't notice there were two Mount Vernons in the state.  It was my misfortune that the Mount Vernon I circled on the map wasn't the one with a Carnegie.  It was so small, it adjoined the equally small town of Somerset and even their combined populations wasn't large enough to warrant a library.  The Mount Vernon with a Carnegie was all the way at the bottom of the state, over two hundred and fifty miles away, so it would have to wait for another Carnegie crusade.

Even though the faux Mount Vernon took me twenty miles out of my way, it led to a truly idyllic campsite in a forest overlooking the damned Mississinewa River.  And it also led to some county roads that I had all to myself, though I wasn't particularly happy when one turned into gravel for several miles.  Gravel has become a fad for some, but not for me, though I accepted it as preparation for the unpaved roads I'll be riding in Africa this winter when I visit an old messenger friend who is presently teaching African history at a college in Liberia.

It was another heavily overcast day, but at least the wind was minimal.  My county road riding ended at the town of Walton and its Carnegie on Highway 35 that cut right through the middle of the small town, thus carrying the name of Main Street.  It had a recent addition to its side, which became the new entrance, with the old entrance barricaded. 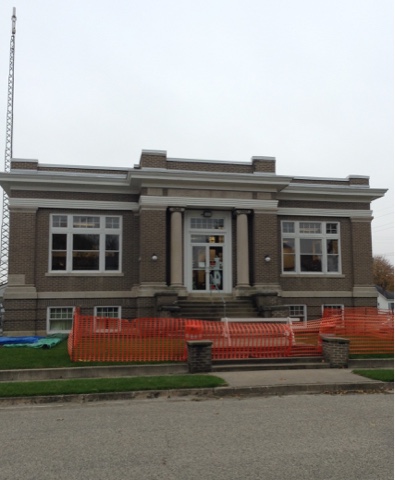 Heading north up 35 I passed two Carnegies that I had visited in 2012 when I took a ride to the Marion library, as it was the only library in the Midwest with Samuel Abt's book "A Season in Turmoil" about the 1994 bicycle racing season, Greg LeMond's last and the the year Lance Armstrong wore the rainbow jersey of the World Champion.  I was on a Samuel Abt quest at the time, searching out his eleven books, which I completed there at Marion.  That was early in my Carnegie quest when they were secondary to other reasons for my rides.   Still, I made a point of searching out the Carnegie shrines.  The one in Royal Center was unique back then, as entrenched in its roots as any, having no WIFI.  It wasn't open this Saturday afternoon, so I can't report if it has joined the Internet age. 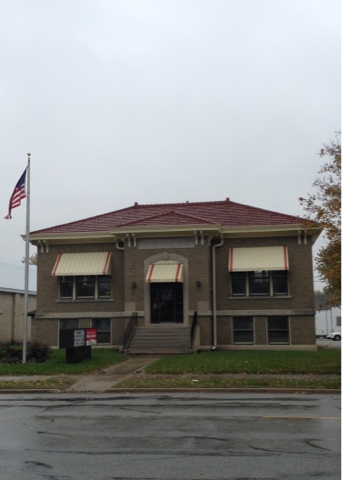 The Carnegie in Winemac had closed at four, before I reached it, but three teen-aged boys were sitting under the porch of its addition out of the rain all using the WIFI.  I overheard one say, "My mother and I are both on parole for that shoplifting we got caught at." 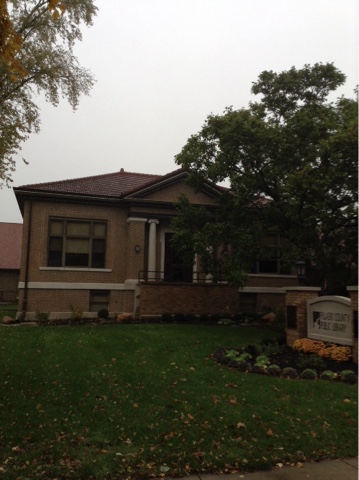 The rain that had them under cover was just a light drizzle, but after an hour in it I was dripping wet and my tights were saturated.  There was no hope of any sun penetrating the day-long murk.  Camping wouldn't be much fun this night.  When I saw a motel on the outskirts of Winemac I thought it might be a mirage, too good to be true.  I ducked into a Dollar Store for some beans and chocolate milk.  An older guy asked where I was headed.  I told him Chicago, but thought I'd spend the night at the town motel.  He gave me the surprise news that there was another motel fourteen miles up the road in Knox.  There was a state forest along this stretch that attracted visitors, explaining the presence of motels.  I was delighted to be able to get fourteen miles closer to Chicago.  I was hoping to make it home the next day, and if I stopped in Winemac I'd be over a hundred miles away, which I'd managed only once on this ride.

A couple miles before Knox I saw a motel, but there was no sign for it nor an office.  A woman was exiting the unit at one end, which I presumed was the office.  She said this was no longer a motel, that the units just rented by the month.  My heart sank, but then she added, "What you're looking for is further up the road.  You'll see an expensive chain motel first, but you wouldn't want to stay there.  Keep going and you'll find what you're looking for."

Knox was a multiple-traffic light town, much bigger than Winemac.  It was nearly dark when I passed the swank two story inn.  After two lights when I hadn't found the cheaper motel, I stopped at a restaurant and asked about it.  "It's past the BP gas station," the receptionist told me, "but you wouldn't want to stay there.  You're better off going back to the nicer hotel."

The parking lot of the cheap motel was packed, but there was a "vacancy" sign on the office.  The hefty, tattooed woman who answered the door told me they were all filled up.  I wasn't sure if she was telling me the truth or if she didn't want a scruffy, dripping wet cyclist sullying one of her not so luxurious units.  She told me to try the other hotel, which had had just one car out front.  I told her it was beyond my budget and asked if it was possible to pitch my tent behind the motel.  She said it'd be okay to camp in the forest behind it.  I'd grabbed a discarded newspaper from a trash can earlier in the day in case I needed it to dry my shoes. The rain had stopped so I had begun to dry a bit.  It would have been somewhat ignominious to spend my last night of this two-month ride in a motel, so I took more than a little satisfaction to be defying the elements once again.  I had been reminding myself during these dreary, rainy stretches of the coda of May and Lloyd Anderson, founders of REI--"Life is better when you spend it outside."

And the next day as I rode through more rain, including several hard downpours, the words of Will Rogers, who I'd heard Keith Carradine quote, echoed through my mind--"Being on a horse is the best thing for the insides of a man," knowing that it is actually being on a bike.  The rain and the sprawl with traffic lights a regular feature slowed me enough that I was concerned about finishing off these final 86 miles before dark.  I rode without pausing for a break the final fifty miles from Crown Point through Hammond and one suburb after another to Janina's house, making it right at dark.

I had very mixed feelings, happy to be getting home, but feeling suffocated by all the traffic and nothing but man made constructions along the road after two months of tranquil rural, small-town scenery.  After 3,600 miles my legs romped along, not needing a rest during that four-hour non-stop home stretch run. I felt as if I could continue on for another four hours or more if need be.  It had been another noteworthy ride and by far my biggest Carnegie haul ever, with sixty-eight new ones in five states to go along with a dozen or so I had previously visited.  I had also finished off two states--Colorado and Illinois.  I could exalt in riding more than twice the distance I had intended.  It is a temptation I always feel and don't often get to fulfill.

Posted by george christensen at 9:11 PM

Congrats on the safe arrival back "home," George!

It's been fun traveling vicariously along with you since my actual chance to ride alongside you for even a brief, over warm period here in KC.

The weather may be gloomy and cold now, but the trees have turned nicely here, and the occasional morning sunbeams reflect the reds, golds and oranges, and every hue in between. Nature flashes her colors before entering her annual cycle of death and rebirth, a promising show.

Looking forward with you to following you on your next adventure.