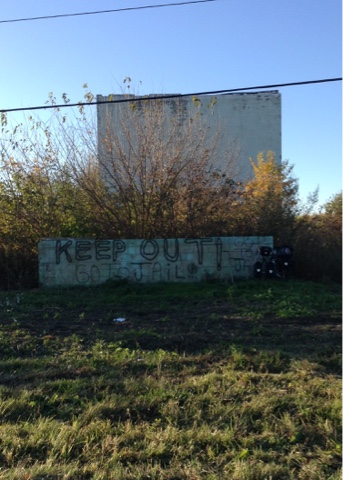 My last campsite in Illinois before crossing back into Indiana was just outside of Danville, a couple of miles before the border.  Dark was imminent.  I resisted a couple of possible forested campsites, as they were too close to civilization and the possibility of dogs being disturbed by my presence.  I knew I had found a spot when I spotted  "Keep Out!" painted on a concrete barrier a little ways in front of an abandoned several story building. I regarded it as a "Welcome" sign.  It is much more emphatic and more inviting than the usual "No Trespassing."  I knew I'd be left alone, especially with the near freezing temperatures.

I had no interest whatsoever in the abandoned building.  I followed a trail past it into a semi-forested mini-wilderness thick with overgrown weeds.  I found a somewhat clear patch of ground under a bush. 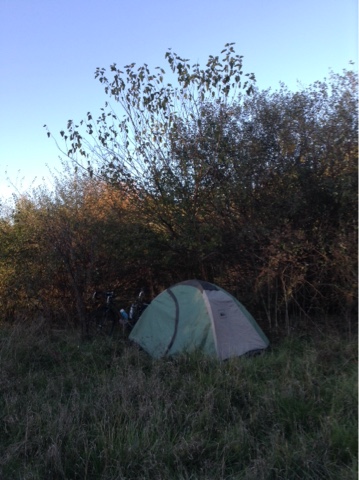 I exalted at another fine campsite and also over my decision to continue on to Indiana rather than turn north to Chicago.  It is the third or fourth time I have extended this ride.  Not wanting to stop has been a hallmark of my touring life going all the way back to my first Big Ride in 1977 across the US.  When I reached the Pacific in Oregon after 4,000 miles, I turned left and kept going another thousand miles as if it were a victory lap.

When I biked up the Alaskan Highway four years later, I kept riding after I reached reached Fairbanks continuing on to Anchorage and then out to Homer, as far as one could go, then back to Anchorage and down to Haines.  My lengthiest extension came in South America.  Rather than flying home after riding 7,000 miles from Costa Rica to the Straits of Magellan at the bottom of the continent, I rode an extra 3,000 miles from Buenos Aires to Rio de Janeiro. I would have continued to the Amazon if I hadn't found a bargain flight.  I had been gone six months and was in no hurry to return.  And so it is on this trip, though the increasingly nasty weather is telling me maybe I ought to.

Two nights after Danville after a day of riding in dank, misty air, rain began in earnest less than an hour before dark.  I was forced to a premature campsite in a clump of trees in the middle of a cornfield before my shoes and tights were too saturated.  I had spotted another abandoned building down a side road, but there were residences nearby, so I slipped into the trees across the road. Evidently someone saw me and called the police.  They didn't show up until well after dark.  I was camouflaged enough that they couldn't see me.  Not wanting to come searching for me in the cold pelting rain, an officer addressed me on an amplified speaker, "We had a report of someone in the woods here.  If you'd like to come out we can find a place for you to spend the night."  He repeated the message twice more before leaving me in peace.

Since he didn't sound overly threatening nor said anything of coming out with my hands up, I felt okay ignoring him.  Maybe if it weren't still raining I would have taken them up on their offer, but I had no desire to walk back to the road in the rain and then have to take down my tent, getting further soaked, even if it meant a dry place for the night, whether it be at a shelter or a jail cell or someone's home and the possibility of watching Game Seven of the World Series.  Instead, I had another peaceable, most satisfying night in my tent, using my candle for the first time for some warmth and to dry some of my gear.

My route into Indiana intersected with the Potawatomi Trail of Death, a forced march of the last 859 members of the tribe from Indiana to Kansas in 1838, sanctioned by the Indian Removal Act of 1830.   Forty members of the group died, mostly women and children.  That paled compared to the more than 4,000 who died on the much better known Trail of Tears further south, but those deaths were spread out over nearly twenty years of forced relocations of multiple tribes in Florida, Georgia, Alabama and other southern states.

It was nice to be back in Indiana with all its Carnegies and round-abouts and witty church message boards--"Heaven Is No Trick, Hell Is No Treat."  My first one hundred miles included three Carnegies I had previously visited--Covingon in 2012 on a spring ride to visit Dwight, Thorntown last month and Sheridan in 2014 on a November ride to Georgia for the School of the Americas vigil.  It was nice to see the majestic Covington Carnegie framed by fall foliage. I was chagrined that it didn't open until ten, until I realized I hadn't changed my watch and it was exactly ten when I arrived. 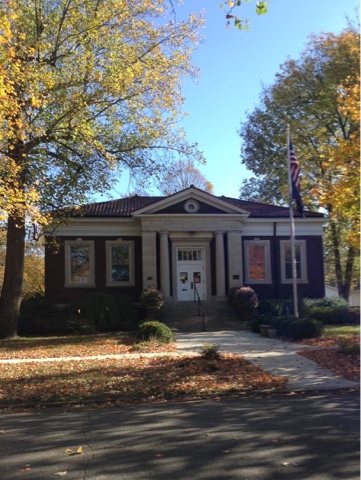 It wasn't until I had circled around to the east of Indianapolis that I reached a Carnegie new to me in the quiet town of Fortville.  It had outgrown its Carnegie, now owned by the Gateway Community Church, which uses it as an outpost to distribute food to the needy and for a weekly free Sunday evening meal.  Food pantries are not an uncommon site in small town America.  Even Telluride has one.  The church also hosted a Halloween "Trunk or Treat," a feature I had seen in other towns for people who live in isolated areas to congregate in one spot and dispense candy to trick-or-treaters out of the trunk of their car. 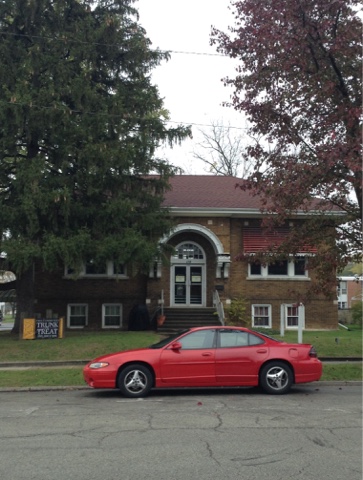 From Fortville it was a quick seven miles to the Carnegie in Pendleton.  It had been taken over by the school district and was now the "Carnegie Learning Center" providing classes for those with learning disabilities. 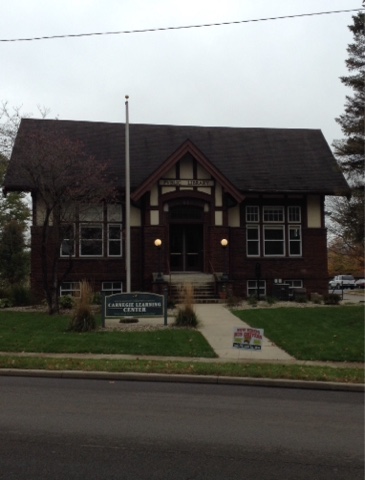 I continued north another eight miles on the same busy four-lane highway to the large city of Anderson and its monumental, domed Carnegie, now the Anderson Fine Arts Center since 1998.  A generous  grant of $50,000, five times the normal amount, made this a genuine stunner with a breathtaking rotunda under its dome. 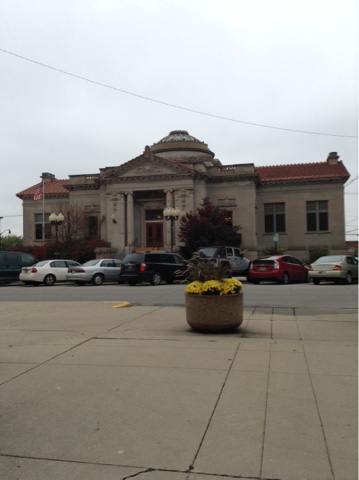 I followed this string of Carnegies another eleven miles to Alexandria, whose Carnegie was the first of this lot still functioning as a library.  It's extension to its side almost looked as if it was part of the original design, lending it a unique beauty. 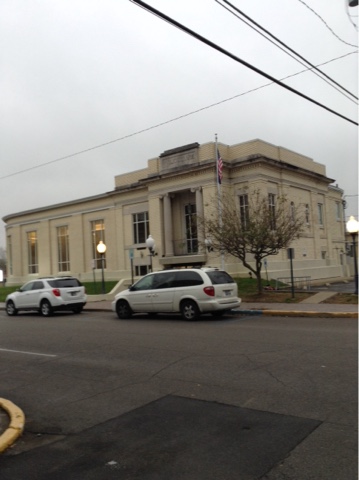 If the rain hadn't started as I left I might have made it to Muncie and a motel before dark.  Or if the rain had started earlier I could have taken advantage of a $35 motel on the outskirts of Anderson.  Alexandria had none to offer.  But now the trip is complete with an encounter with the law.


Posted by george christensen at 7:15 AM