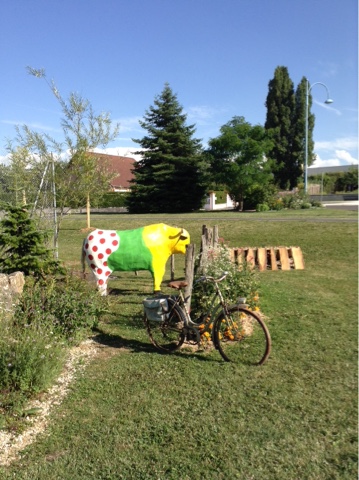 I anticipated an easy day on the legs, as my plan was to bike thirty miles of the stage route, wait for the caravan to pass and then duck down twenty miles to Vesoul to watch the end of the stage in a bar and then commence riding the next day's stage.  It would be a welcome break from the day before when I had to ride hard for sixty miles to reach a point to watch the caravan and then twenty-five miles of pushing it to try to get to Vittel before the peloton.

My morning would be so relaxed, only having to ride those thirty miles by noon, that I could sleep in until seven.  I could stop for some of those photos that epitomize The Tour, such as elderly couples who park their cars at a choice spot along the route not long after sunrise and have breakfast and then lunch while awaiting the peloton. 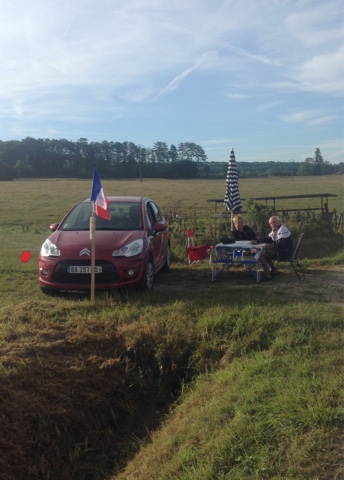 It was a little after eight when this couple happily greeted me with a "Bonjour," and then added as I made my departure a "Respecte."  Of all the appellations accorded me as I ride by all the thousands lining the route--allez, bravo, bon courage, chapeau--it is the rarest, like a diamond in the rough, but the most heartfelt and appreciated.

I didn't receive any respect though from the carload of thugs who look as if they are from Marseilles who lay seize to The Tour every year forcing mini-cellophane French flags on people along The Tour route and then demand a Euro. They are a true menace jumping out of their car and rushing up to people sitting in their chairs, handing them a flag and then soliciting money.  Sometimes they commandeer an intersection and stop every passing vehicle. 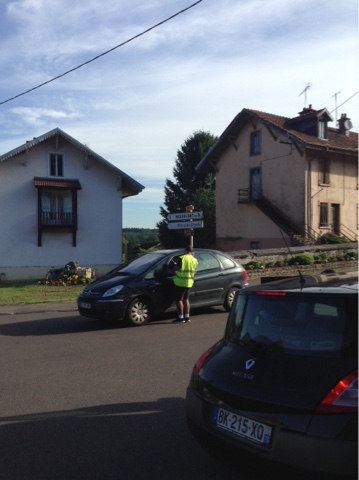 I snuck in a couple of photos before their leader saw what I was doing and pounced on me trying to get me to delete what I had shot. 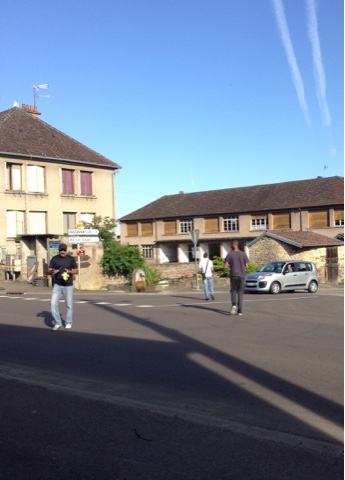 I played dumb and said I was just a tourist and got away as he tried to fish my ipad out of my handlebar bag.

I made it to my caravan-watching spot in the city of Luxeuile-les-Baines in ample time to get groceries and stop in at its Tourist Office to take advantage of its wifi to download Lance Armstrong's daily podcast of The Tour called Stages.  I'd prefer the Warren brothers if they were podcasting during The Tour,  it brother Dean is taking a 25th anniversary cruise with his wife.  It will be a rare occasion when he hasn't attended The Tour, as his job as a flight attendant allows him to at least make it to Paris for the final stage.

Lance does does offer some insightful commentary, though he doesn't cite as many personal anecdotes as he might.  And he's a little sketchy on Tour history.  He said the early tours were just five stages, when they were six, and that they ventured into the mountains even then, which didn't happen until several years later.  He also said the Yellow Jersey originated because it was the color of the newspaper that sponsored The Tour.  The official story is that it was adopted in the middle of the 1919 Tour to make the leader more identifiable to the public and it was the only bright colored jersey the director Henri Desgrange could find in the city where The Tour found itself at the time.  Eugene Christophe, of toe strap fame, was the first to wear it and his fellow competitors mocked him and called him a canary.

I didn't do much scavenging in this city with the road packed with fans. 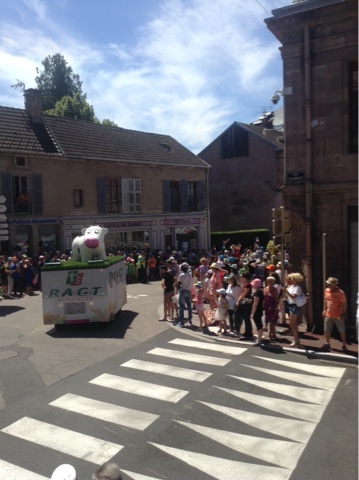 Instead I was content with vicariously enjoying getting some thing from those who did. 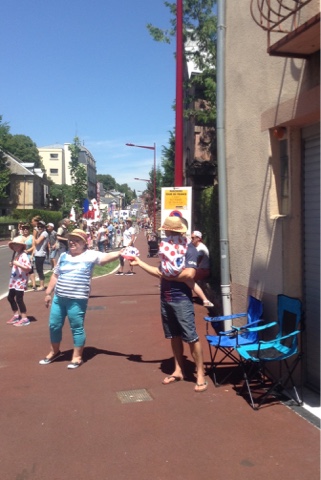 There were no Colombians to be seen, but there was a contingent of Norwegians. 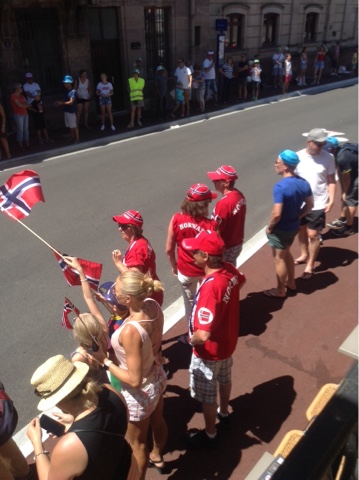 One little girl was wearing a green jersey she had received from the Skoda publicity crew, sponsor of the Green Jersey. 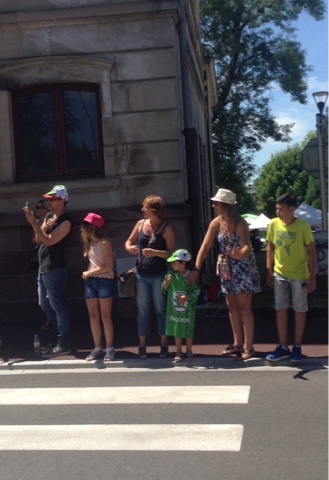 After this twenty-minute interlude I set out for Vesoul.  I had my choice of a little longer direct route on a major highway way, or a shorter route winding through small villages.  I chose the scenic route, knowing though it could be tricky finding my way.  It had cost me time the time before to Vittel.  And I was victimized today again, first when the route intersected with The Tour route, which was closed down, so I had to detour around it.  I eventually got on the main route, but was besieged by 18-wheelers and then Tour followers in their campers.  What I thought would be a leisurely, scenic two hour ride, turned into a two-and-a-half hour race to get to Vesoul in time to see the dramatic end to the first significant stage of The Tour--one of its three mountain-top finishes, though it was less than a four-mile climb.  It would be just an indicator who was on form, rather than a true test.

I found a bar in the plaza where the next day's stage would start with a cluster of working men glued to the television along with a handful of the crew that would start erecting the Départ structures, a perfect setting. 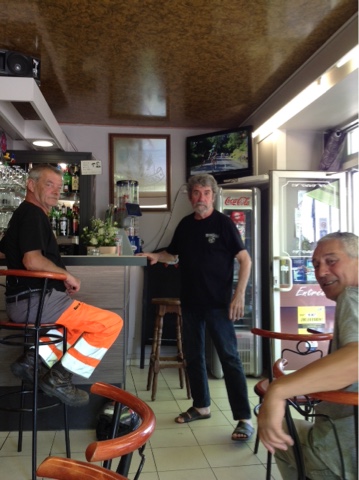 The Italian Fabian Aru, who missed the Giro, his first ambition, due to injury, surprised the climbers by attacking 2.3 kilometers from the summit.  Froome and company let him go.  He was able to hold on for the win, but when Froome eventually gave chase, only Porte, Martin and Bardet were able to stick with him.  Quintana and Contador failed the test.  Froome let up to see if anyone else cared to help with the chase of Aru, but they didn't have anything left.  Martin eventually took off.  Froome couldn't quite catch him, but held off Porte to get the crucial third-place bonus seconds.  Froome's teammate in Yellow, Thomas, couldn't keep up, so Froome assumed the leader's jersey, with Thomas holding on to second.  As with the opening time trial, Froome once again asserted he is the contender with the best legs.

I then began following the course markers through Vesoul.  The black-checked neutralized version of the markers went on for an intolerably long seven miles, winding through neighbor's and an adjoining village.  It made me suspicious that The Tour accepts an extra 10,000 Euros here and there to include a place on its route.   Fortunately I was overly chagrined by the length of this neutralized zone, as I would be turning off The Tour route after twenty-five miles to cut over to the next day's stage.

Posted by george christensen at 12:18 AM