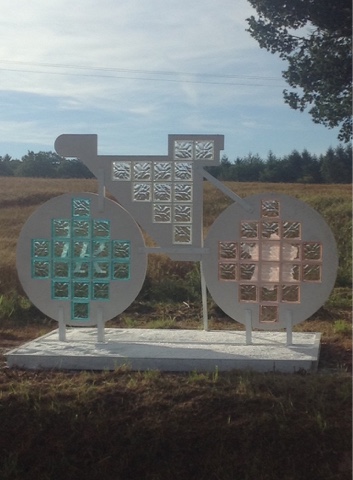 My route to Cherbourg took me through Tours where I was able to salvage a visit with Florence and Rachid, a near annual event these past fourteen years.  It was an extra bonus to taking the Queen Mary home.  And my visit to Tours was enhanced with Janina joining us.  She'd been in Paris the past nine days and was undecided on whether to head to London or Cherbourg.

There had been the possibility of meeting up with Florence and Rachid in Digne a month ago, but Florence was immersed in a job she couldn't forgo.  It would have been a two-day drive across the country.  She'd just begun a two-month assignment of forty-five hour weeks.  The French worker may have won the right to a thirty-five hour week years ago, but employers have ways of getting around it and Florence had fallen victim to it.  It may be inflating her pocketbook, but at what price she's not sure.

Luckily my arrival coincided with the July 14th holiday, so she wasn't tethered to her servitude.  For the first time I could enjoy this great national holiday, as in years past I've been fully immersed in The Tour and spent the day pushing the pedals.  It's always a special stage with an extra amount of fans and fervor along the road and with the route designed with flair to honor the day.  For once I could watch the stage from start to finish and without the nagging concern of how far I could cycle after it concluded.

It was a short 63-mile stage with three significant climbs meaning it would be vigorous racing from the gun.   It didn't start until 2:30.  The four of us watched it in the comfort of Rachid and Florence's apartment.  After a Sky rider had worn Yellow the previous eleven stages, another rider began the stage in the holy garment--Aru.  Lance commented that it was the first time in years that an Italian had been in Yellow, forgetting that Nibali, Aru's former teammate, had won The Race just three years ago.  Lance has acknowledged he hasn't followed racing very closely until recently and he proves it from time to time.

Froome was just six seconds behind after faltering in the final couple of hundred meters up a steep 20% climb the day before.  Aru didn't win the stage, that honor went to the French rider Bardet, but he finished far enough ahead of Froome to seize the lead, heightening the drama of today's stage.  Had Froome just had a bad day or wasn't he on form to win The Race?  Up till now most had been conceding The Race to him.  Would he claw back the time he had lost or lose even more?

Today's stage further undermined everyone's expectations with Froome's Spanish teammate Landa linking up with Contador to get two minutes up the road on the main contenders.  In between the two groups was Quintana, like Contador trying to get back in The Race.  The cameras were kept busy following the three groups.  By the end Quintana and Barguil in Polka Dots had joined up with the two up the road with Barguil surging to the finish to take the victory, the first French win on Bastille Day since 2005.

Froome stuck with Aru and Bardet and Uran, who are all within 35 seconds of each other, the tightest cluster of the four top riders in Tour history this late in The Race.  So Froome showed he wasn't vulnerable today, except maybe to Landa, who moved up to fifth, just one minute and nine seconds behind Aru.  His loyalty is suspect, as he will be moving to Quintana's Moviestar team next year.  The Race was truly heating up, and the next day had another of those short steep finishes that had undone Froome the day before,  but not after a long climb.

We hadn't been out all day, so were happy to be finally freed to take a stroll into the city center two miles away.  We crossed the Cher River and continued on to the Loire, where the evening's fireworks would be launched.  Tours is a metropolis of nearly half a million people, the 18th largest in France.  It has a large cathedral dating to the 13th century that had recently been restored by a group of craftsman whose life's mission is to go around France devoted to the enterprise.

Janina may not attend religious services, but she is always eager to partake of these majestic, old cathedrals, as she has studied medieval architecture.  She turns tour guide excitedly pointing out Gothic and baroque and Romanesque features.  The tight row of columns and the high windows letting in extra light made this a cathedral unlike any she had visited, and instantly her favorite.  Among its new features along with some modern stained glass windows was a huge rock serving as the base of the altar, alluding to the Druid predecessors of these large cathedrals.  We arrived in time for Friday night mass, watching a procession proceed to the altar for a biscuit and sip of wine and a blessing.

Almost as impressive as the cathedral was a two hundred year old sprawling Lebanese cedar nearby with large posts holding up its lower branches that extended out almost as far as the tree was high.  Looking out from behind a window was the stuffed carcass of the legendary Barnum and Bailey elephant Fritz, who had been put down in Tours in 1904 after it had gone berserk.  Just a couple blocks away along the Loire was a memorial to the American army that had defeated the Germans in battle there.  Rachid also took us by the blacksmith shop that had made Joan of Arc's sword.  He was well aware of it as he was one of six hundred artists enlisted to contribute a work of art relating to the six hundredth anniversary of her birth in 2012.

The masses were gathering for the fireworks a couple of hours before they would commence at 10:30 after sunset.  That was too late for us.   We were content with whatever glimpse we could catch from our fourth floor sanctuary a couple miles away.  We had the television on in the background hoping to see what coverage French television would give to Trump's visit with Macron this day, but none appeared.

We watched the early coverage of The Tour the next day before Janina and I resumed our travels to Cherbourg two hundred miles to the north, me by bike and she by train.  It is always hard to say goodbye to Florence and Rachid, who epitomize the ultimate in unselfed friendship.  They are as much of a reason to visit France every year as Cannes and The Tour.  They provided a most welcome respite from the pedaling, but it was a a revitalizing joy to be back out in pastoral France gliding along on the bike.

I continued for two hours before stopping at a bar to watch the conclusion of the day's stage.  Kittel had been shed before a late Category Three climb and the contenders for the stage had been narrowed to the elite cadre of explosive riders who could climb.  It would be a dandy finish that had Sagan written all over it had he still been in The Race.  His absence allowed the honors to go to the Australian Michael Matthews, who  is one hundred points behind Kittel in the points competition.  But more importantly, Froome rediscovered his legs and Aru lost his, finishing over twenty seconds behind Froome and losing the Yellow Jersey.  Landa too must have been depleted by his effort the day before, as he finished fifteen seconds back.

The next major showdown doesn't come until the Alps on Wednesday and Thursday, though the next day's stage on the Massif Central with two Category One climbs could shale things up as well.  Every stage has become must-see viewing, but none moreso than Thursday's first ever finish on the Col d'Izoard.  I'll be watching it either on the ferry as Janina and I are crossing The Channel or in a bar in the UK packed no doubt with Froome fanatics.
Posted by george christensen at 12:17 PM