The Fourteen Carnegies of Cleveland

Thanks to the persistence of William Howard Brett, the head of Cleveland's library from 1884 until his death in 1918, Cleveland can boast of having more Carnegies than any city other than New York with 65 and Philadelphia with 25.  Carnegie provided an initial grant for seven in 1903 and then succumbed to the hounding of Brett to add seven more, telling him that he would surely make it to heaven for his efforts.  He couldn't get Carnegie though to give a larger hunk for a main library, as Carnegie clung to the philosophy that it was better to sprinkle libraries in neighborhoods, making them more easily accessible.

Thirteen of the fourteen libraries still stand, the only loss the Woodland Branch to fire in 1957.  Five still function as libraries, four serve as office space for organizations that provide community social services, three are boarded up and closed and one is an African American Museum seeking funds to renovate and reopen. I had a fine day bicycling nearly fifty miles from one to another under a cold drippy sky.

I began my rounds at the Amtrak station at seven a.m. after seven-and-half hours aboard the Lake Shore Limited across Indiana and Ohio.  I had a seat to myself, so was able to sprawl out and get some sleep.  The train station is just across a main highway from the Rock and Roll Hall of Fame, which has a prominent spot on Lake Erie blaring rock and roll from speakers around the clock in its large plaza.  A plaque out front explains that the term "Rock and Roll" was originated by a local disc jockey, Alan Freed, in 1951 to describe the up tempo black rhythm and blues records he played on his nightly "Moon Dog House Rock and Roll Party" show. 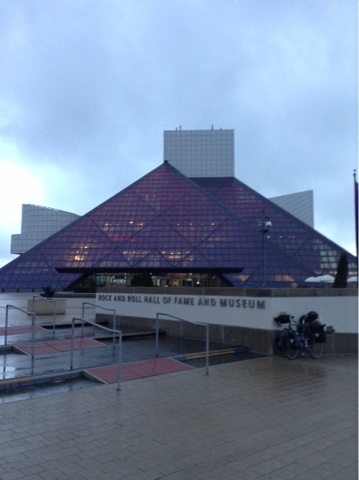 From the museum I headed to the eastern end of the city and into East Cleveland for a bonus Carnegie for the day, making up for the one that burned down.  Its grandeur was somewhat undermined by a large glassy addition to its left called the Debra Ann November Learning Center.  At least "Carnegie Library" remained above the original majesterial entrance. 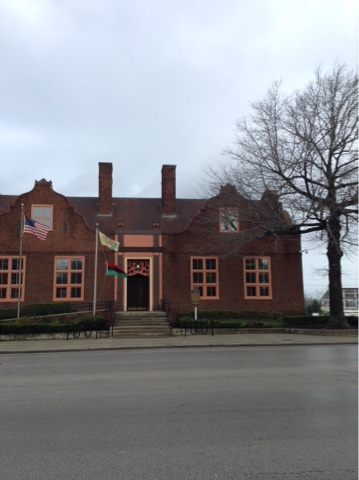 The traffic was tame and not excessive all day long, maybe thanks to the extra-long state-of-the-art buses, some of whom had fast lanes all to their own, such as Chicago's traffic commissioner has been trying to introduce on Ashland Avenue.  But the minimal traffic was probably mostly due to the declining population of the city and profusion of abandoned buildings and empty lots, epitomized by the saddest Carneige I've ever come upon--the Superior Branch, that at one point had been rechristened as a "Learning Bank."  It was one of three of Cleveland's Carnegies designed by Carnegie's son-in-law, Henry Whitfield.  It was the last built in the city in 1920. 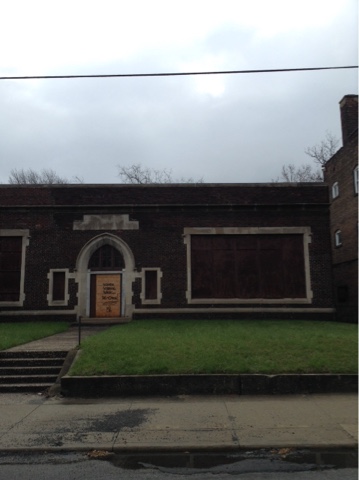 The others he designed had more flair.  The presently closed South Branch had the look of a castle. 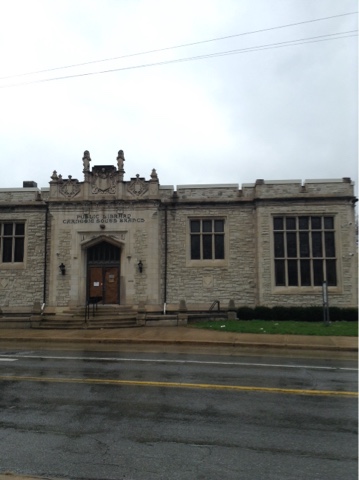 The Quincy Branch was more recognizable as a Carnegie.  It has been renamed the Langsten Hughes Center and houses a clinic and health and education center and had an expansion to accommodate them. 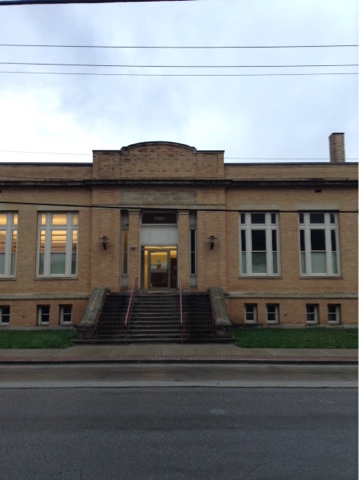 Several of the Carnegies were basic, almost bunker-like, buildings.  The only distinguishing feature of the East 79th Branch were its large windows, but they had their luster diminished by a thick metal grating to protect this present Alcohol Rehabilitation Center. 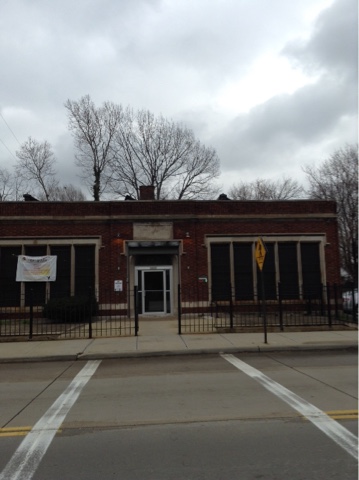 The post WWI Brooklyn and Jefferson Branches, among the last Carnegie bequeathed, were near clones, designed to be turned into turned factories if they were no longer needed as libraries. 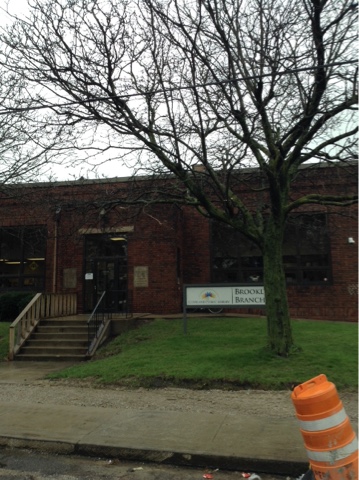 But they had both thrived and were buzzing with patrons in the early afternoon even before school let out. 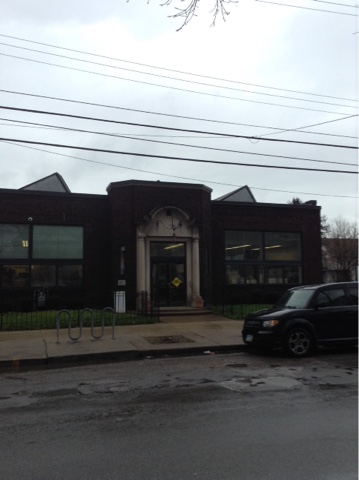 One of the librarians at the Brooklyn Branch, Laura, was a great Carnegie enthusiast and bubbled over at my quest and that I had traveled via Amtrak with my bike, something she has been eager to undertake.   She was ecstatic that I had already seen nine of Cleveland's Carnegies and was equally enthusiastic describing the four that awaited me.  She hovered by the window where I left my unlocked bike concerned that it might disappear, a common occurrence at the library. I hadn't bothered to lock it figuring I'd be in and out in a couple of minutes and that bike thieves wouldn't be lurking in the rain nor likely to try to ride off on my overloaded bike.  When she took me to see a back room with a fireplace, she asked one of her cohearts to keep an eye on it.  No one I have asked has been able to explain the circumstances of a main artery through the city being named for Carnegie, whether it was due to his library benevolence or if he had business interests here.   Laura didn't know either, but she gave me the name of the history librarian at the Main Library who could well know or find out.

Carnegie Street passes within a block of the Sterling Branch, which still functions as a library and a "Safe House." 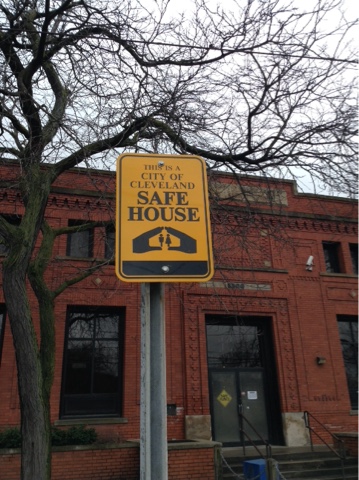 The Lorraine Branch, built in Greek Revival style, also had a sign in its window designating it as a "Safe Place." 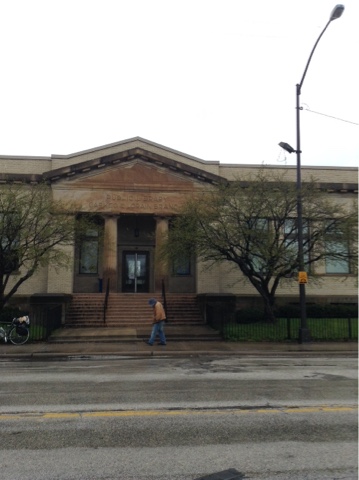 The West Branch had even more architectural flair.  It's hint of a wedding cake gave me a double wow.  First upon sighting it and then when I entered and saw its commodious central room.  It had a bike book pertinent to the region--"Pedaling to Lunch--Bike Rides and Bites in Northeast Ohio." 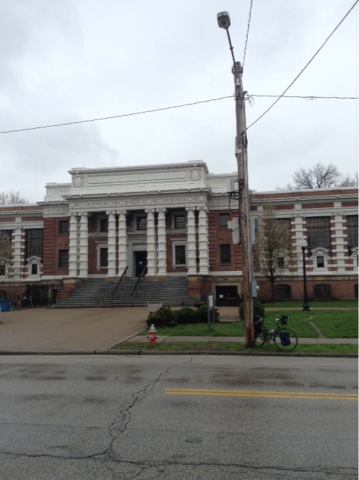 The Miles Park Branch, sitting on a slight hill with a long promenade through a park leading to it, was perhaps the most distuished of the day's Carnegies. 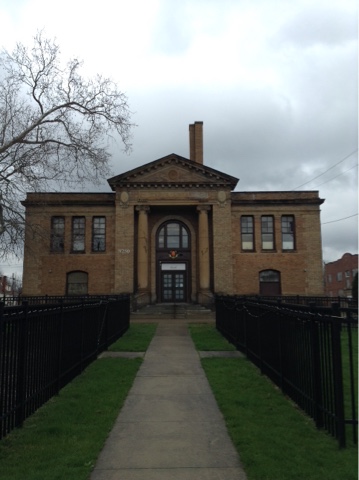 Even though it no longer served as a library, but rather for housing and economic development, it's original circulation desk remained in its stunning rotunda. 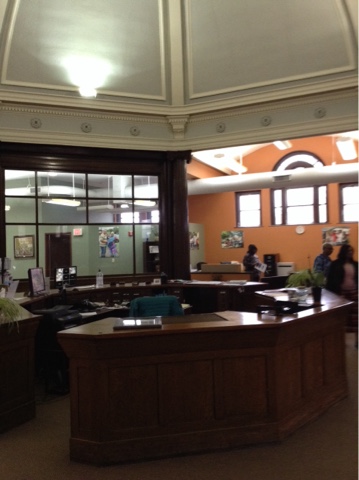 When it closed as a library in 1987 it was briefly a museum, which the Hough Branch has become, though it is presently closed as it seeks funds to reopen.  It was one of the first African American Museums in the country.  The once magnificent building from 1907 was in sorry shape with boarded up and broken windows. 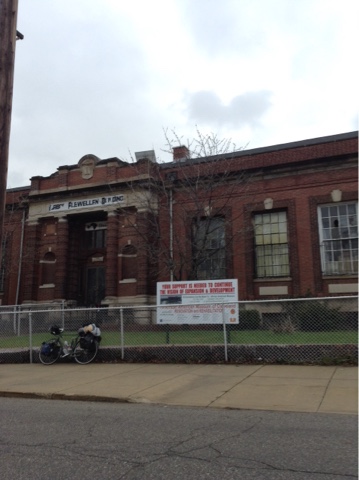 The St. Clair Branch was a monstrous two-storied red brick building with some ornamentation along its  roof line.  It is now the Goodrich Gannetg Neighborhood Centef. 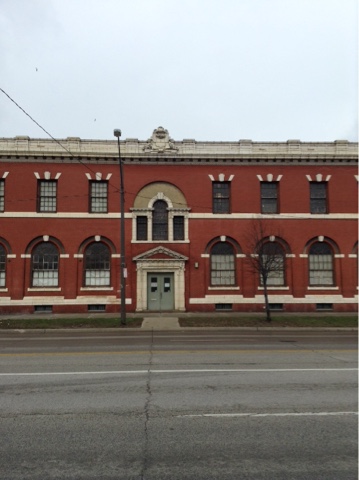 The Broadway Branch is a unique ten-sided building with a large rotunda. It's location where St. Clair Avenue angles into 55th Street allowed it to have gallant entrances from both streets.  Unfortunately, it is presently vacant after once being a restaurant and I could only peer in at its spacious interior. 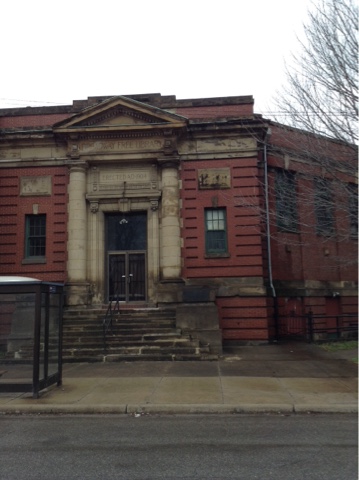 I finished my rounds at the huge downtown library that any city could be proud of.  Laura's friend Terry didn't have an answer for how a main thoroughfare through the city came to be known as Carnegie, but he did tell me about a book the library had by Mary Ellen Armentrout on the state's 114 Carnegies.
The library also had a wealth of books on bicycling, included two I had been trying to track down and several others I didn't know of but would have kept me in town for several days if I'd had the time. Perhaps the greatest discovery was  "A Year in the Saddle" by Giles Belbin that listed a significant bike event for every day of the year.  There was also a bike memoir by the very literate Tour de France chronicler Graeme Fife, "The Beautiful Machine," that I didn't know about.  None by Les Woodland  though, the prolific writer on cycling lore, who I've been trying to contact for years, as he frequently mentions grave sites of Tour champions.  Just this past week I connected with him and thus has begun a wonderful correspondence.  He told me where the second Tour winner is buried.  It is on my way to Cannes.

Posted by george christensen at 6:25 AM

Thanks for visiting, George! I'm glad to say I worked at two of the Carnegies you visited (Lorain and Carnegie West), in addition to my current job at Main library. They are great buildings. The South Branch, which you mentioned as being closed, is hopefully only temporarily closed. I regret that you weren't able to step inside because it is the CPL Carnegie that is most near to its original state. The fate of that building has been up in the air for quite some time. Here's just one of many articles on that debate: http://www.cleveland.com/architecture/index.ssf/2014/12/cleveland_public_library_sched.html I think I can guess what side you'd stand on.

Regarding the roadway named for Carnegie, the city changed most street names in 1906 when a numbered grid was adopted. This happened mostly as a result of Cleveland's annexation of many nearby towns and villages (e.g., West Cleveland, Ohio City, Newburgh, on the West Side). Before 1906, Carnegie was called Sibley. I wasn't able to find anything stating that the Carnegie renaming involved any sort of special ceremony. My guess is that it was part of a larger group of streets named after prominent industrialists and citizens.

The Encyclopedia of Cleveland History has a nice entry on street names in Cleveland: http://ech.cwru.edu/ech-cgi/article.pl?id=SN1

The 1906 Street and Avenue Guide, which lists the old and new names of roadways, is available from CPL here: http://cplorg.cdmhost.com/cdm/singleitem/collection/p128201coll0/id/2499/rec/2

Happy trails. If you ever need a place to stay in Cleveland while out riding, let me know. I would be happy to host you.

Terry: Thanks for all the commentary. It was a pleasure meeting you and Laura. You both represent the Cleveland library system well. I will most certainly return. Your selection of bike books beckons. There are some notable books that few libraries have on their shelves. Hopefully we can go for a ride.