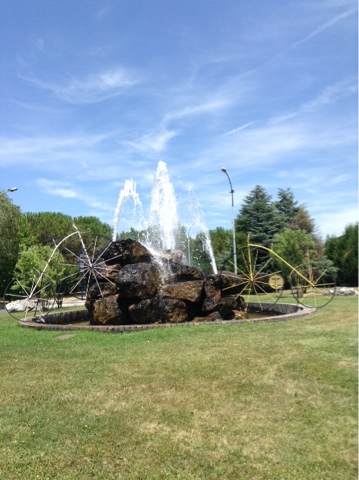 For twenty-three days straight, starting with riding the time trial course in Utrecht the day before the official start of The Tour, not a day has passed that I haven't  ridden at least a few miles of The Tour route, my most days ever by far in a single Tour.  That was largely thanks to taking a train for the first time during The Tour for the 450-mile transfer from Vannes to Pau on the first rest day.  But it greatly helped too that the route was very serpentine, allowing me to shave off quite a few miles by taking a more direct route than the peloton was taking.

And today I was hoping for one more day of riding the route by taking the train from Grenoble to Paris for the final stage.  I had a ticket in hand, but it was for Monday.  When I booked it a month ago there were no tickets left for the three-hour trip on Sunday.  With luck there might have been a cancellation, so I headed directly to the train station from my campsite seventeen miles away.  There were two other touring cyclists in line for tickets.  They too were trying to get to Paris.

I had passed them the evening before outside Bourg d'Osians holding up a "Paris" sign soliciting a ride.  Not even any of the team vans and trucks making the drive cared to oblige them.  They were Americans and had ridden the past five stages and wanted one more.  They got their tickets, as there were some first class tickets available.  They were twice the price of my second class seat, more than I was prepared to pay.  I'd be content to watch this final stage in a bar, something I've done every year but once.

I availed myself of the train's waiting room to charge my iPad and was entertained by a young woman with her backpack to the side playing a piano provided for anyone waiting in the station.  It wasn't the first French train station where I'd seen this remarkable amenity, but it was the first time I'd seen someone taking advantage of it.  What more could epitomize the French more than this? 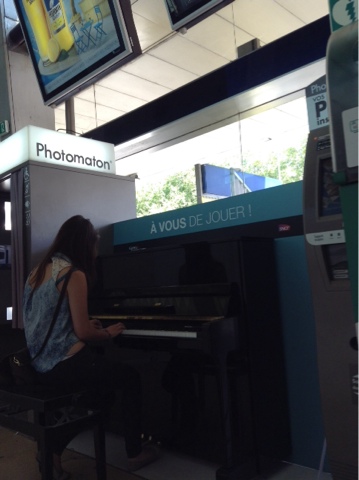 Today's seventy-mile stage into Paris didn't start until after four, continuing the tradition started on the anniversary of the hundredth Tour two years ago of an evening finale on the Champs Élysées.  That gave me the opportunity to meander around Grenoble and hang out in a couple of its parks.  At the site of its Olympics there was an outdoor rink where guys were playing hockey on roller blades.  Nearby were a couple of small climbing rocks with artificial hand and foot holds.  Both had pre-teenaged girls spread-eagled trying to reach their summits.  A mother was livid, screaming with bulging veins  at her daughter to come down.

Grenoble's downtown was virtually deserted, making it easy to spot the plaque on the building on a narrow street where Stendhal was born in 1783. 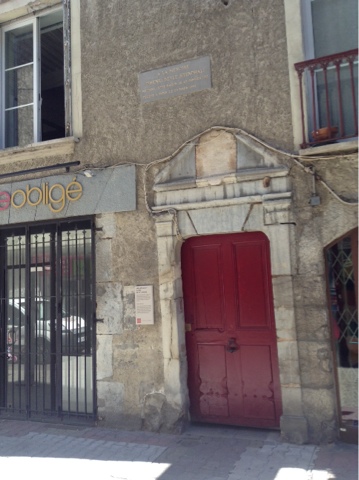 Even the tourist office was closed with just nine to noon hours on Sundays.  I did find a couple of outdoor café-bars across from the cathedral that had televisions.  When I first went by at five the peloton hadn't reached the Champs for its ten laps of seven kilometers each, which would take about ninety minutes.  The racers were riding leisurely as if on a Sunday ride with hands on their brake hoods rather than the drops and not drafting, spread out and chatting.  And they were also wearing rain jackets.

There was a danger that their circuits on the Champs might just be ceremonial as well if the cobbled roadway was deemed too treacherous.  Fortunately the rain let up and the sun came out and the sprinters could have one last go at it and the French fighter jets could scorch across the sky before the final lap spewing out red, white and blue smoke of the tricolor over the Arc de Triomphe.  It was quite an impressive site.  There was even a helicopter high above the jets to give an overview of the spectacle.

The pressure was on Cavendish to win, since he'd once owned this stage winning it four times straight up to 2012.  Plus his contract is up.  His 2.2 million euro salary, which he earned when he was winning five or six Tour stages a year and was considered the greatest sprinter of all time, would be cut drastically if he didn't improve upon his lone stage win so far this year.  He's facing some tough negotiations, as he finished a miserable sixth while his former lackey Griepel won his fourth stage this year.  It was reported that he was in tears when he met his family after the stage.

It was a great year for Germany.  Three Germans won six stages.  The French were also gloating over their three stage wins, having gone some years lately with none, especially since they were all done in dramatic fashion on significant stages, none more so than L'Alpe d'Huez yesterday. Though the highest placed French riders were just ninth and tenth after a second and third last year,  there is a crop of young French riders that had the French press already looking forward to next year.  The French also claimed the Lanterne Rouge, once a big deal, but now largely ignored.  Still, finishing last of the 154 racers from the 198 that started gives Sebastian Chavanel some distinction. He finished just under five hours behind Froome and eight minutes behind his closest competitor, Svein Tuft, one of two Canadians in The Race.

There were no surprises at the top of the standings, unlike most years.  The "Fab Four" finished in the top five, with Valverde, the impostor, sandwiched right in the middle of them.  But he, like the other four, has won a Grand Tour and was the number one ranked rider last year, so he was no revelation, as Thomas would have been if he hadn't tumbled from fourth to fifteenth.

Not only the French can start anticipating next year.  So can Quintana and Froome and all the rest of us who love this grand event.  Froome becomes the twentieth multiple winner of The Tour.  Next year he can join LeMond and Bobet and Thys as three-time winners and then shoot for the five-time club of Anquetil, Merckx, Hinault and Indurain.  He might be thinking he'd already have three if he hadn't been held back the year he finished second to Wiggins, and he could well be right.

Posted by george christensen at 12:42 AM

congrats George, you did it again . vincent