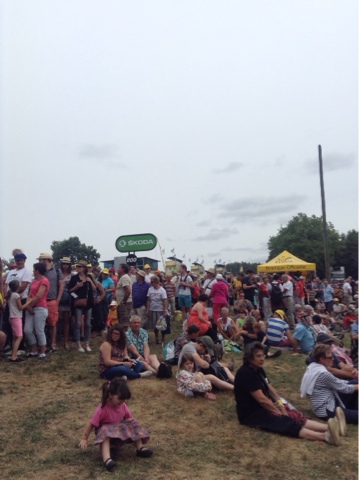 As I sat outside the cathedral in Plumelec giving a one-hour charge to my iPad, a continual wave of fans walked by heading to the stage finish a mile away at the summit of the Côte de Cadoudal.  It was only noon, three hours before the riders would be leaving Vannes, seventeen miles away, for the day's team time trial.  It was hard to imagine that there would be space for all of these people on the one-mile climb.

Also passing through the town square, coming from the opposite direction,  several of the teams rolled by in their aero helmets having just previewed the course, looking hardly out of breath, though I know they would have ridden the course at speed to gauge how fast they could take the turns.   They are so well-conditioned, it was more important for them to put in a practice ride so there'd be no surprises on the course, than to relax and conserve energy.  Their level of fitness is beyond fathoming.

When I finally joined the mobs streaming to the course I was relieved to discover a huge meadow in front of the Big Screen and a wide expanse of open space along the road with enough room to accommodate this Woodstock of people flocking to The Tour. 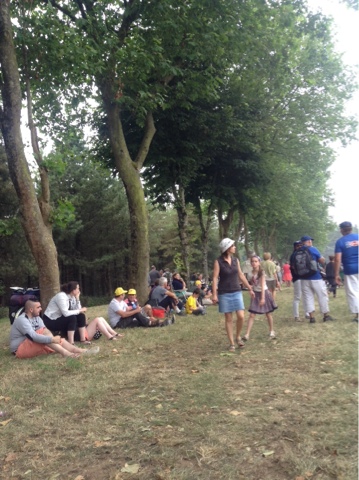 Not all, probably not even a majority, of them could be defined as cycling fans.  Rather, they were fulfilling their national duty and their inbred conditioning to contribute their presence to The Tour.  They are a sporting crowd unlike any other--orderly and well-mannered--and of all ages. Kids joyfully in tow are in abundance and show no boredom, even in the long lull between the caravan and  their brief glimpse of the racers. They don't come out to party or to be raucous, but rather to uphold the tradition of their upbringing, having come to the roadside with their parents or grandparents, and now they're bringing their children for this family outing.

Every day, wherever I find myself along the course, whether at the start or the finish or somewhere in between, and in every part of the country, it is always the same.  I marvel at the almost religious devotion they bring to the roadside.  They all sincerely and vigorously applaud as the racers pass.  And the moment afterwards they gather up their belongings and their trash and beat a fast retreat.  Within minutes the roadside is deserted and one would never guess that it had been packed with people for the past two hours.  Since The Tour varies its route every year, some localities have years between The Tour's visit, so it is truly a momentous occasion for them when it passes near.

Equally amazing at the start and finish of the stages are the vast array of buildings that are erected just for a few hours and then disassembled and set up one hundred miles or more away in less than twenty-four hours. 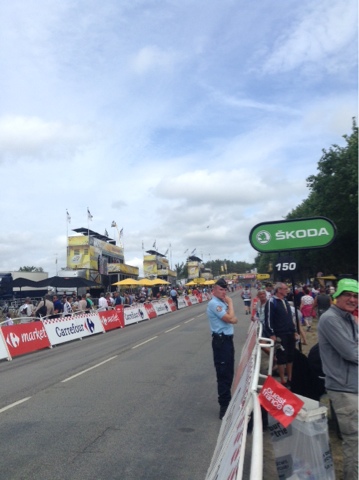 Just around the bend from the finishing stretch a permanent sculpture of a cyclist consecrated this legendary climb. 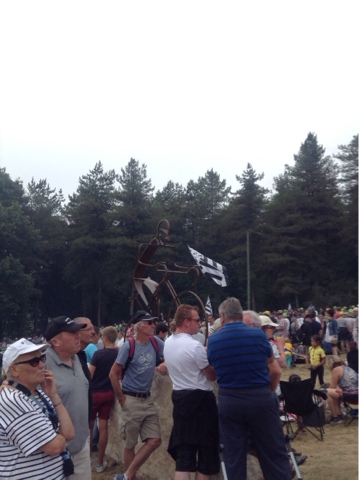 The black and white flag of Brittany was sported by many.  The region has its own language.  Many road signs are in French and Bretagne. It is similar to Corsica, as its flag is in prominence there and so is its language.  And like Corsica, there is a minor separatist movement that was once much stronger and serious than it is now. 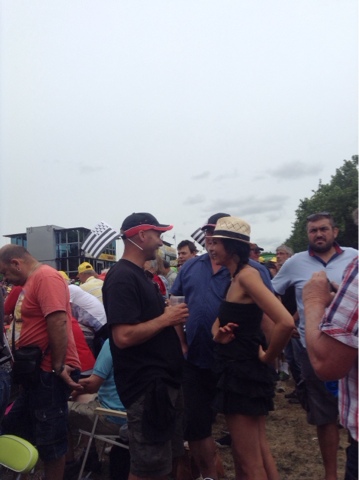 I had my choice of two screens to watch from where I was sitting in the grass under a tree depending on whether people blocked my vantage--the giant one that folds out of an 18-wheeler and a smaller one on the side of one of the several two-story structures erected for VIPs to sit in.  The twenty-two teams went off at five minute intervals starting at three.  There wasn't much likelihood of one team catching another as happens in individual time trials when the riders are separated by a mere minute.  As it was, four minutes and fifty-eight seconds separated the winning team, BMC, which started at 4:40, and Orica-Green Edge, which was the first team out of the gate.  The Australians were riding with only six riders with three of their riders having retired from the race due to injuries, putting them at an extreme disadvantage.  The last time The Tour included a team time trial Orica won it three years ago in Nice.  Not only did Orica finish last, they did it convincingly, by two minutes and twenty-six seconds.  The other twenty-one teams were all clustered within two minutes and thirty-two seconds.

BMC, one of three American teams, won by a mere second over Sky, twelve seconds less than what they needed to put Van Garderen in Yellow.  It would have been a tremendous honor, but it will make tomorrow's Rest Day much more restful for him limiting his media obligations, leaving him better prepared for the following three days in the Pyrenees.  He regains second place overall, slipping past Sagan.

The next three days will give him a chance to prove how seriously he must be taken.  Last year he had a bad day in the Pyrenees that kept him off the podium, knocking him down to fifth.  He's riding much better this year and finished second to Froome in the Dauphiné just before The Tour.  He also finished second at the Tour of Oman, which he should have won if he had taken an obscure Italian seriously on the Green Mountain climb rather than towing him to the finish letting him have the extra energy to sprint past him and gain enough time to win the week-long race.  He has been on the fringe of breaking into the limelight.  Maybe the training he has been doing with Lance in Colorado will make the difference this year.  He was the only one who could keep up with Froome on the climbs at the Dauphiné, but still the press hasn't put him in the contender category here.  He admits that it irks him, but he can understand why.

After the stage I retraced the route to its starting point in Vannes where I will take a train to Pau on the fringe of the Pyrenees while the peloton will be flying.  The road was a virtual parking lot.  There were only a handful of us on bikes flying past them all.  The wise lingered at their picnic sites along the road. There were fields with tents for large groups and a few decorations along the way. 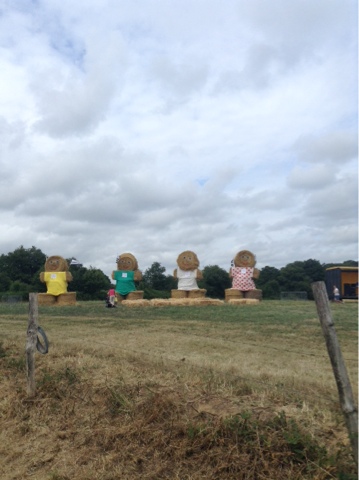 Posted by george christensen at 2:10 AM