Objective number one for the day was to be in front of a TV set by three o'clock, about the time I presumed the Garmin team would be setting out on the fifteen-mile team time trial course  in Nice.  I was hoping to make it as far as the decent-sized town of Brignoles by then, as it would be sure to have a few bars with television sets.  It was about sixty miles from where I started my day.

Three hours and thirty-two miles into my day's riding I paused in the main plaza of Draguignan to search for a water spigot.  Instead of water I found Glenn the Englishman, the cyclist I met at the Nice bike shop the day before with four broken spokes.  He had left Nice immediately after replacing his wheel rather than sticking around to watch Stage Three on television as I had  and had gotten a bit further down the Stage Five route than I had.  He may have been better conditioned than I gave him credit for, even though he was clearly a neophyte at the touring, cycling with a hefty pack on his back. 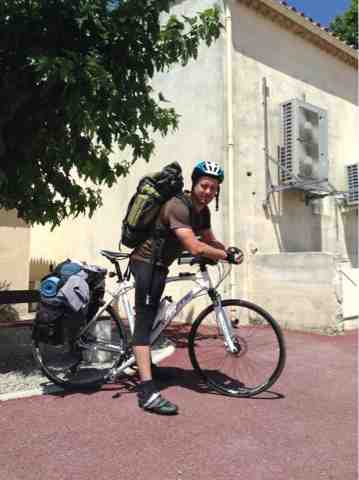 Not only was a neophyte as a touring cyclist, he was a neophyte cyclist as well, having taken up cycling just a year ago, tired of the tedium of the gym for his workouts and hoping the bike could do more to control his weight.  He is a solid 200 pounder.  The cycling greatly agreed with him.  By November he was enjoying it so much he decided to ride The Tour route, even though he had never been a fan of the event, not even watching any of it last year when Wiggins captured the national attention, becoming the first Englishman to win it, such a big event that it earned him a knighthood.

Glenn is a self-employed thirty-year old accountant.  He put all the skills of an accountant into his preparations for riding The Tour.  He trained diligently riding the 120-mile coast-to-coast route across the UK five times,improving his time each time.  Nutrition was one of his concerns.  He brought along a good supply of electrolyte tablets. He was interested in my diet.  When I mentioned madeleines as one of my energy foods, he took a look at the ingredients and said, "These are perfect for a cyclist."  He tried one of mine, pronounced it most edible, and then bought a pound's worth at the next grocery store we stopped at.

He knew from his research that French cemeteries were a good source for water, but had yet to stop at one.  Within an hour of our riding together he had a chance to sample his first and was pleased too at what an ideal wash-up opportunity it offered. It was a hot, near 90 degree day, so we were both in need of a good soaking.

He also knew that the course markers are up a day in advance on each stage, making it easy to follow.  We were ahead of the crew putting them up and expected them at any moment.  When we left the cemetery, there they were, the most pleasing of sites for us Tour followers.  Glenn had a Garmin GPS device mounted on his handlebars with The Tour routed programmed into it, so the course markers weren't an absolute necessity, but still they conveyed the thrill of being on the route.

Glenn was strong and eager enough that we reached Brignoles by 2:30, half an hour ahead of schedule and also due to me not taking a rest when I met him in Draguignan as I had planned.  He was all set to start riding, so I decided to join him for at least a spell despite having just ridden two-and-half hours non-stop through hilly terrain.  My legs were still rested from my previous light days, so they did not protest.  It was actually a good test for them and they were doing great.

Rather than stopping in Brignoles we decided to push on eight miles to Tournes to watch the time trial.  But first Glenn wanted to buy some food and then we took a wrong turn following the signs to Toulon rather than Tournes.  That set us back, delaying our arrival in Tournes until 3:30, half an hour after I wanted to be in front of a TV.  But we immediately found a bar with a television.  It had Wimbledon on. No one was watching it, so there was no problem switching to The Tour.  Moments after we had settled in the Garmin team was in the starting blocks.  What a relief not to have missed their half hour on the course.  With six or so teams on the course at a time, the cameras divided their attention among all of them, and they gave no more attention to Garmin than any other even though they were the defending time trial champs.  They were three seconds behind the best time at the half way mark and didn't make it up by the finish.  That was disappointing and meant we didn't necessarily need to watch the rest of The Race.  But we were in need of rest and food, so we made it a full ninety minute break.

Pushing on to Tournes also made it easier for reach Aix-en-Provence well before dark, my second prime objective for the day.  It is the Ville Départ for the sixth stage.  It was less than thirty miles away.  As we passed through it at eight pm my odometer hit 100 miles for the day.  Glenn's was at 88. He didn't have any necessity of hitting 100 for the day so was content to find a place to camp after we cleared the metropolis and its sprawl.

Thanks to his GPS device we had no problem picking up The Tour route out of town.  It followed a main boulevard for a while lined with majestic towering plane trees, some wrapped in cloth representing The Tour jerseys, a most gladdening site. 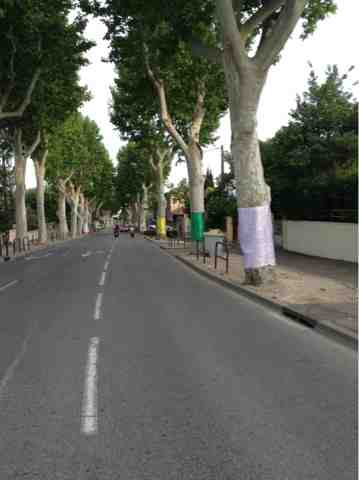 The town had also created a billboard celebrating The Tour. 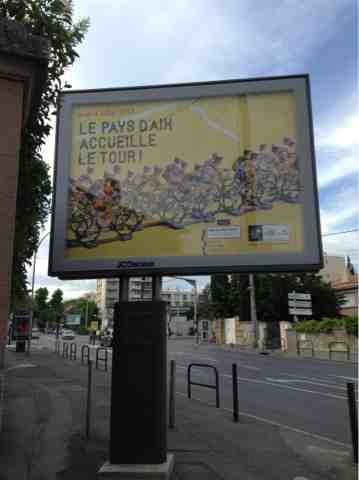 It was another seven miles before we found a nice field with rolled bales of hay to camp in.  It had been another great day on the bike for both us.

Posted by george christensen at 11:05 PM

George you left out the most important information for the day.

Hooray for George -- nice to be following your Tour. It's the only way!

Excellent few days cycling, George. How are you these days?

Glenn: Upping my mileage in preparation for a trip to Dubai to follow a couple of races comprised of Tour de France teams and riders. The Tour of Dubai starts Feb. 5 and the it will be on to the Toir of Oman. Looking forward to desert camping and not much competition for water bottles.