I was only five minutes behind the peloton after the Stage Fourteen start, but my deficit had  increased to over three hours when I reached the Stage Fifteen start in Givors.  It could have been considerably less if my day hadn't begun with an hour-long climb surmounting a high ridge before I plunged into the Rhone Valley.  I also lost time trying to navigate my way around the sprawl of Lyon.  It is always a headache and only marginally less so on a Sunday morning contending with minimal traffic and also aided for the first time with a GPS device.
When I arrived at Givors, a somewhat squalid industrial town just south of Lyon, at 1:30, three hours after the peloton had set out on its marathon 150-mile race to Mont Ventoux, the sprawling Tour departure village of tents and other structures and miles of barricades had nearly been dismantled.  About the only evidence that thousands of people had been gathered there just hours before was six large, nearly-loaded 18-wheelers blocking the road.  There were more workers wrapping up the job than lingering fans.  The debris too had all been swept up.  I had to check several garbage cans to forage for a copy of the daily Tour newspaper full of interesting features given away in abundance each day. Ordinarily its easy to find a few laying about.   But not here.  Being forced to peruse garbage cans though yielded a bonus--a copy of "L'Equipe," the one item I always put some effort in trying to snag from the caravan.
The tourist office was right there at the starting line.  I stopped in to see if it offered WIFI, as the monthly Internet service for my iPad had expired and there was no way to renew it on Bastille Day with everything closed.  It had no WIFI but I was directed to a bar several blocks away near the town center where I was told a large screen had been erected for viewing The Tour.  That would have been a fun and memorable place to spend the next three-and-a-half hours, but once again I did not have such time to spare.  I had to keep biking to keep up with the peloton.  I didn't even have time to spare to go out of my way for WIFI.  I was counting on a McDonalds or a KFC or the French fast food restaurant Quick along the route for a quick mail check and blog posting.  I now have to keep tabs with David the German birder I've ridden portions of the past three Tours with.  He has decided he can't stay away and is taking a break from his latest bird-watching assignment on a Danish ship to meet up with The Tour in the Alps.
The peloton followed the Rhone south out of Givors past a few tributes along the way. 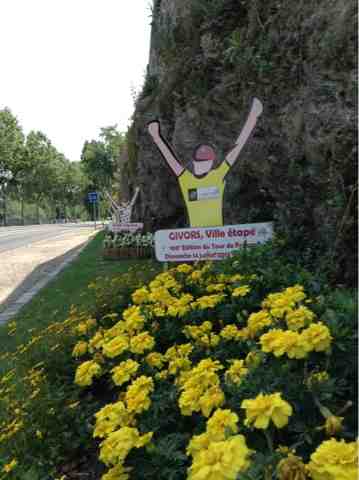 I had the road pretty much to myself on this hot Sunday holiday afternoon. Cemeteries were frequent for a soaking and refilling my water bottles with cold water.  My thought was preoccupied with how glad I was that I could ride at my own pace and didn't have to end my ride going up Mont Ventoux in this baking heat.  I had been on Ventoux the last time The Tour made the climb in Lance's comeback Tour.  It was the penultimate stage and Lance was clinging to a thirteen second advantage over Wiggins to remain on the third rung of the podium behind Cantador and Schleck.  It was a cold windy day with fans besieging the vans of two French teams that were giving out replica jerseys as an extra layer   against the cold. It was never in the plan this year for me to make it to Ventoux. I knew that was virtually impossible unless I decided to skip the Brittany portion of The Tour.  Watching it in a bar would be just fine.  I knew this could be the stage that could decide The Race and I was greatly looking forward to escaping the sun and watching others riding bikes.
Two hours down the road I found a touristy bar with tables out front and three televisions inside all tuned to The Tour with a handful of watchers. Once the peloton began the climb many of those sitting outside flocked in for all the dramatics--Sky pushing the pace and riders dropping behind and then the attacks.  There were two breakaway riders less than a minute up the road that had no chance of holding off the fast-charging Froome and company. There were two Garmin jerseys among them--Martin and Talansky.  Now is the time that Christian is truly missed.  Martin hung tough and moved up to eleventh overall while Talansky tailed off finishing 25th six minutes back, but still thirteenth overall, most commendable for a rookie.  Both are a threat to finish Top Ten.  The only other time Garmin managed that was the year Wiggins finished fourth and Christian seventh, a year after he had finished fourth himself.
The Colombian climbing sensation Nairo Quintana, who ranked fifth overall, down five-and-a-half minutes to Froome, took off after the two up the road.   Froome let him go, waiting until seven kilometers from the summit to blast off from behind Porte's wheel, leaving Contador and all else behind. He caught Quintana within half a kilometer.  After repeated accelerations, Froome was finally able to shed him 1.3 kilometers from the barren summit, riding in alone twenty-nine seconds ahead, putting his full stamp of authority on The Race.  He also deservedly claimed the polka-dot jersey as the best climber in The Race, having won both summit finishes.  Six stages to go.  Two demanding stages in the Alps remain. Only a disastrous day will prevent Froome from prevailing.
Posted by george christensen at 4:05 AM

Nice work keeping up with the tour -- it was an exciting stage up Mt. Ventoux!