The Presentation of the Teams

The twenty-two teams gathered in Porto Vecchio for the start of The Tour have the option of four roads to ride to keep their legs tuned up in the two days they are here before the start of The Race--either up or down the coast or two inland routes.  I made my approach to Porto Vecchio yesterday morning on one of the inland routes and unsurprisingly was passed by several of the teams out for a morning spin.

The first was the  Lampre team in their bright pink jerseys, chattering away in Italian.  The nine riders were riding  double file and were followed by a long stream of backed-up traffic and a couple of random cyclists riding all-out trying to keep up.

The next group to pass me was a couple dozen citizen cyclists riding in the same direction I was.   They were riding the first segment of Stage One, a forty-mile loop down to Bonifacio at the bottom of the island and back to Porto Vecchio.  I was taking a break having already ridden twenty miles,  sitting along the road finishing off my breakfast of eggs and lentils and couscous when they came by. Among them was Skippi.  He spotted me and stopped for a chat and to fidget with his rear derailleur.

He's friends with many of the team mechanics, but wouldn't impose on them during their final Tour preparations.  This was his first time to Corsica and was enjoying it.  I asked about the wild-camping possibilities nearer Porto Vecchio. Sometimes The Tour provides a place for Tour followers.  He'd camped on someone's property who he'd gotten permission from, but thought he'd look for something better.  He didn't have any information on the team presentations later in the evening, but we planned to meet up then if not before.

Less than five miles down the road I came upon a cemetery, just what I needed to replenish my water bottles and do a little wash. 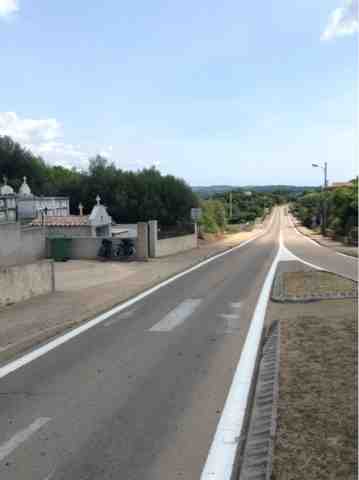 The water faucet was just inside the lower wall along the road.  Before I had finished, I glanced up just as the Garmin team was climbing past.  I popped up, displaying my Garmin jersey, and shouted out "Allez."  Christian recognized me, thanks in part to the jersey that had been a gift form him, and peeled off from his teammates for a quick hello, dodging all the cars that were in the team's wake.  "I wish I had a camera," he said.  "That would make a great shot of you."

I wished him luck, especially in the team time trial that Garmin had won the last time it was included in The Tour two years ago.  One of the team's time trial stalwarts, Dave Zabriskie, wouldn't be riding this year, still recovering from injuries, but Christian said they could still win it.

It wasn't much further into Porto Vecchio, a modest-sized resort and port, that had a most relaxed feel to it, an ideal setting for The Tour start.  A round-about the peloton would pass on the way out of town featured an over-sized bike with imitation palm fronds for spokes and pineapples for hubs.  Just beyond the round-about I spotted my first course marker for the year, always a joyous site. 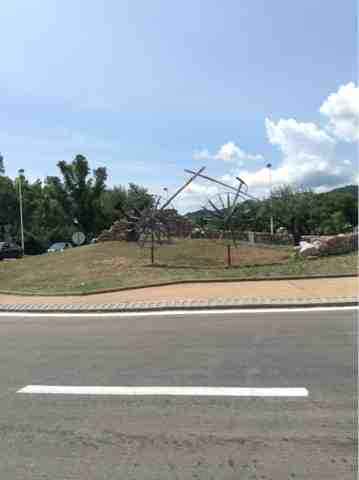 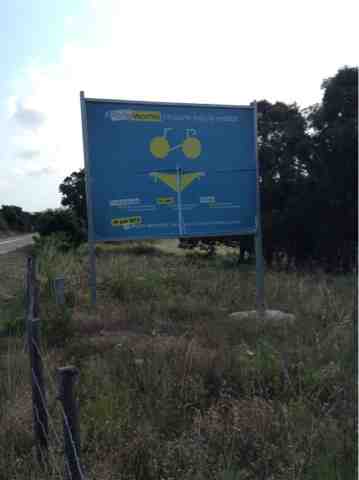 Shops throughout the town had variations on the poster. 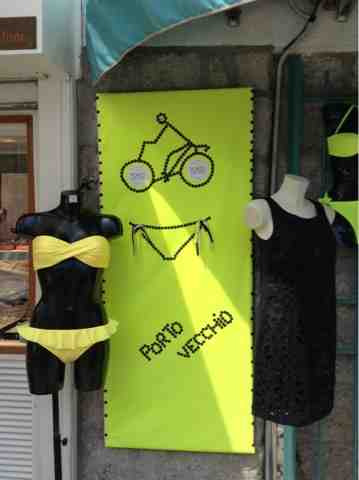 Even if a shop didn't have a bicycle in its window, it paid tribute to yellow. 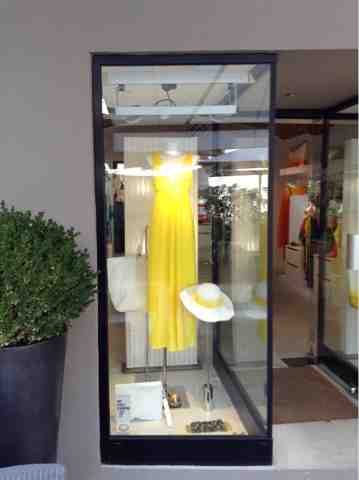 A water sports shop mounted a cyclist on water skis. 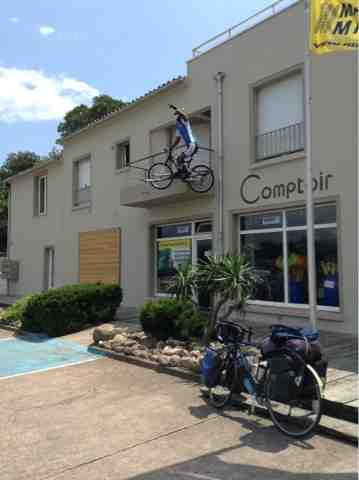 A sporting goods store paid tribute to green and red polka dots as well as yellow. 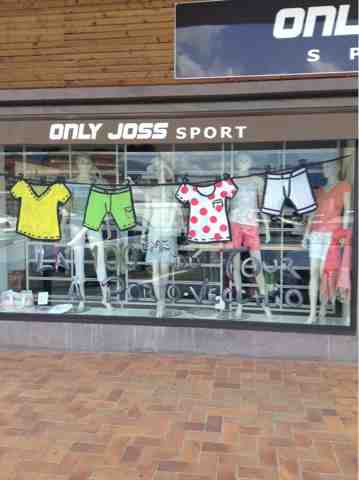 Planters blocking off a street in the port making it a pedestrian mall were wrapped in the trademark colors. 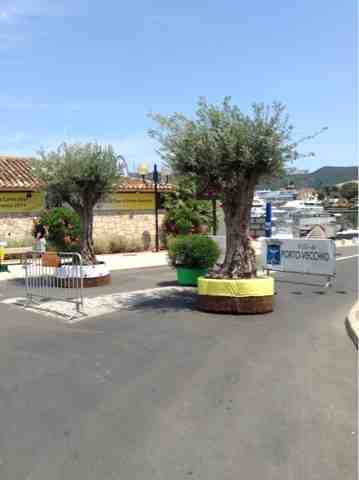 The town cathedral also joined in the spirit with a pair of bicycles mounted by its entrance.  The Friday night mass will be devoted to The Tour and the priest will give the peloton a benediction before it sets out Saturday morning. 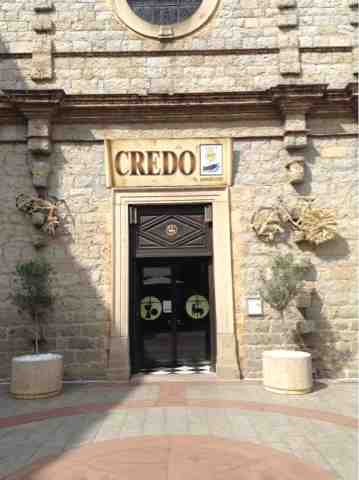 The tourist office featured some fine original bike art, some paintings and some sculpture. 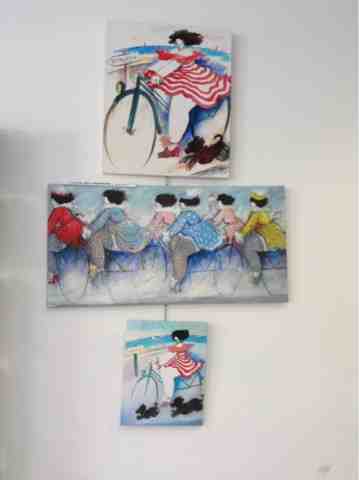 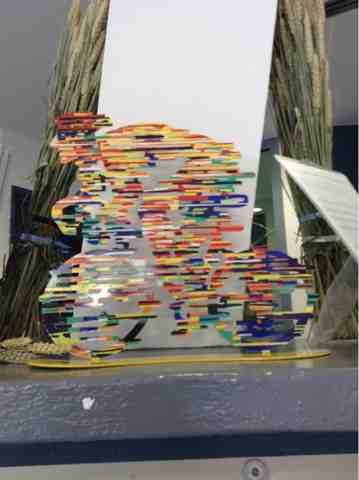 The plaza where the riders would gather for a slow promenade to the team presentations along the port was overlooked by a mosaic. 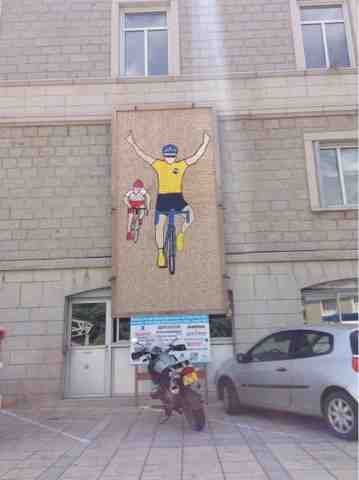 In the plaza was a giant yellow mushroom structure. 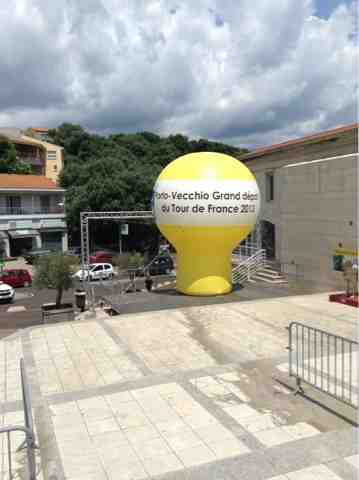 During my meanderings about town taking it all in, I encountered Skippi once again by the harbor.  He had just discovered one could have a free shower at a nearby facility.  That was great news.

Unlike in previous years where the riders took a slow ride team by team through a small loop of the city hosting the Grand Départ after they were introduced, this year the ride preceded their introduction about a mile away.  Skippi and I spent a while at their departure point before going over to the large stage where they were being introduced after being transported with their bikes by boat.  The ceremony lasted about two hours.  Teams went off every few minutes, some of them walking right past us to get to their bikes.  Many of them know Skippi and stopped by for a handshake.  Here's the Belgian World Champion Philipe Gilbert with his BMC teammate Cadel Evans just behind him. 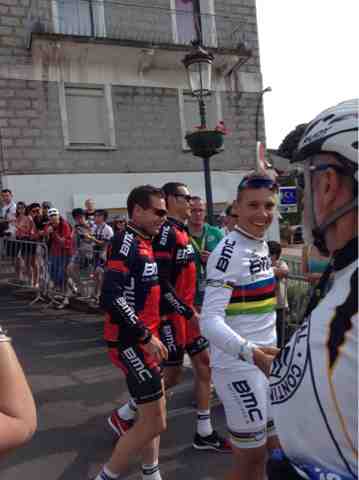 There were a few representatives of the caravan of sponsors amongst the riders dispensing free stuff.  My first score of the year was a three-pack of madeleines, 214 calories of eggs and butter and flour, something I always welcome.  Daniel Mangeas, the long-time official voice of The Tour, introduced each of the 198 riders with a brief biographical sketch. The teams rode on stage through the portal in the tower, a symbol of Corsica.  This is the Garmin team. 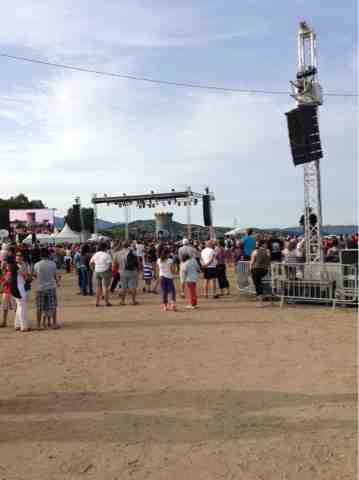 The last team to be introduced was the defending champion Sky team, even though their winner from last year, Bradley Wiggins, won't be riding this year, recovering from a knee injury he suffered at the Giro.  His teammate Chris Froome, who finished second last year, is this year's favorite and was the last rider introduced.

As I cycled away from the event I heard Skippi shout out my name.  He had gone over to the stage area to try to connect with riders as they cycled back to their team buses or hotels if they were nearby.  I slowed to let Skippi catch up without looking to see how far away he was.  Moments later he was beside me on my fully loaded bike accompanied by Froome himself.  "This is my friend George," he said.  "He rides the whole route with a full sack."

All I had time for was a "good luck," as he sped on his way through the crowd.

Posted by george christensen at 3:01 AM

I had suggested to Chris , that Brad could use George's bike as a way to get fit for his next Cycling Event !