There are those who make art the point of their travels.  When I'm on my annual Tour de France quest, I am one of them, though it is bike art that is my focus.  It is no different than art found in museums.  It uplifts and gladdens and inspires and amazes and gives hope.  There is an astounding quantity and variety of bike art along The Race route, almost beyond imagining even for a veteran such as me, particularly in those towns that host a stage start or finish.  This may be my tenth Tour de France, but I am still often left agape by the many different and original ways the bicycle, "man's most noble invention," can be portrayed and celebrated.

That was once again the case in two more of Brittany's Ville Ètapes.  Fougères offered up a pair of mini-round-abouts in its city center each decorated with a trio of elegantly designed arches with bicycle wheels attached. 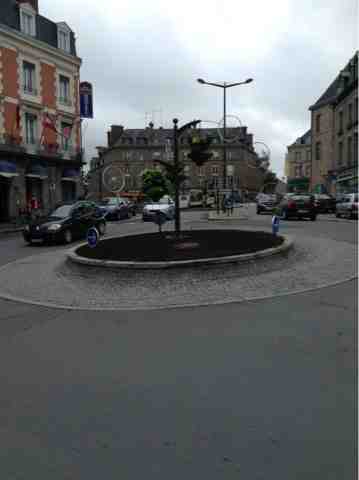 One was in the process of being erected. 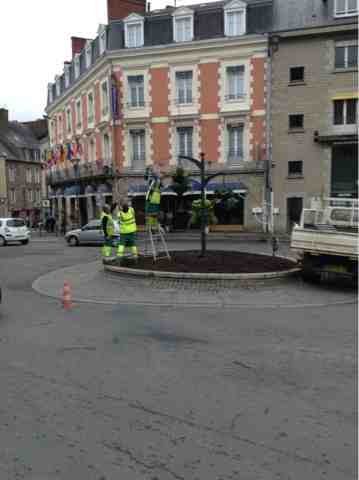 A larger round-about at the town's entry also featured wheels.  And in the background was one of the many of the banners around town mounted on towering poles announcing the coming of The Tour. 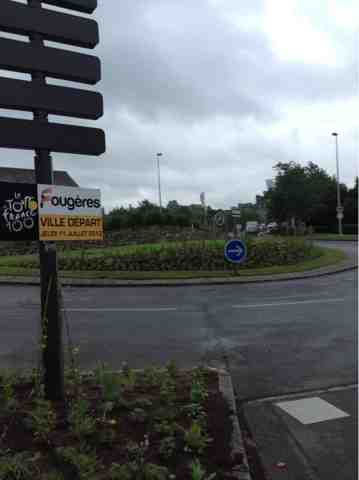 And above the narrow streets of the old part of the city fluttered mini-versions of the yellow, green and red polka dot jerseys. 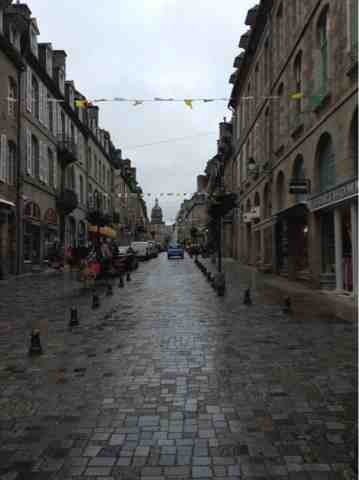 From Fougères it was 28 miles north to Avranches, start town for the time trial that will end at Mont-Saint-Michel.  I had intended to bypass it and head south from Fougères, following The Tour route to Tours, to begin my return to the Mediterranean for the start of The Tour.  With the need to be in Nice in two weeks to catch the ferry to Corsica, I have been eager to start my migration south.   But I couldn't resist the lure of another Tour Ville Ètape and what art it may have to offer, so decided to squeeze in an extra 70-mile loop up to Avranches then over to Mont-Saint-Michel following the 20-mile time trial route along the English Channel and then back to Fougères.  One of the lures was that Fougères had a new four-story library (mediatech) with lots of electrical outlets.  Libraries aren't so easy to come by in France, and only those in larger cities are open more than a few hours a week, so I was eager to take advantage of it a second time, and maybe a third during The Tour when I return, as the stage from Fougères will start in the plaza in front of the mediatech.

Avranches more than rewarded me for my efforts.  It was easily the best and most innovatively decorated of the dozen or so Ville Ètapes I have scouted out so far this year.  The main round-about into the city though had no bicycle theme.  It was taken over by a tank and a monument honoring Gen. Patton and the American D-Day troops. 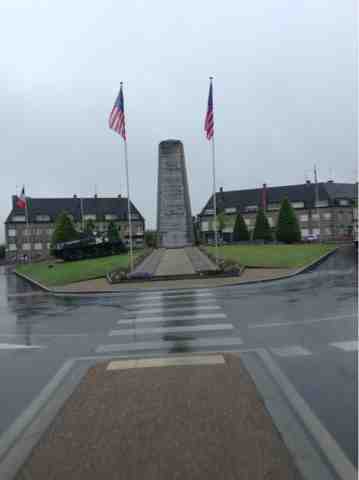 Facing it was the Patton Hotel. 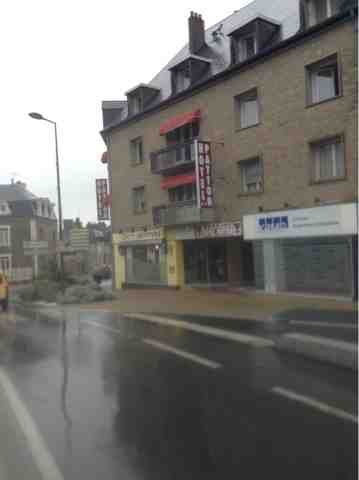 But further into the city I was gladdened to see a digital count down on its Town Hall of the number of days until The Tour's arrival. Not too many Ville Ètapes have a count down, though all should. That is always an indication of a heightened appreciation for the monumental honor of being a Ville Ètape.  The Town Hall faced a large plaza where the racers will be launched down a ramp beginning their solo ride against the clock. 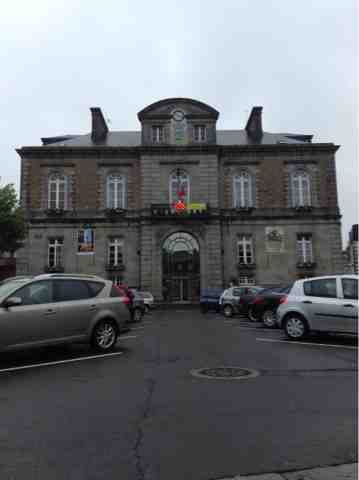 The nearby tourist office had an exhibition space devoted to The Tour.  Three panels had newspaper clippings from the three other times Avranches had been a Ville Ètape--1990, 1993, and 2003.  Display cabinets were filled with old magazines and Tour souvenirs. 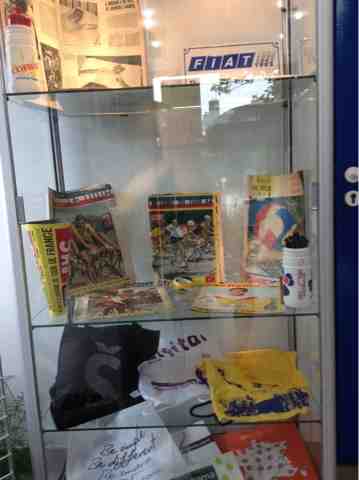 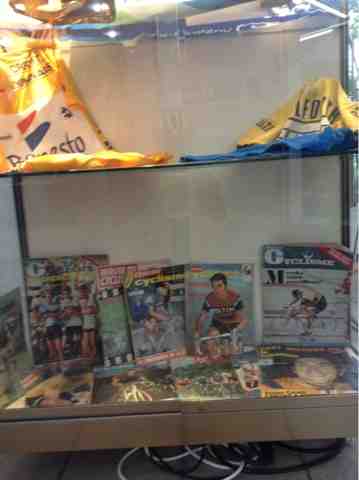 A panel paid tribute to long-time voice of The Tour, Daniel Mangeas, who lives in the vicinity and is beloved by all. 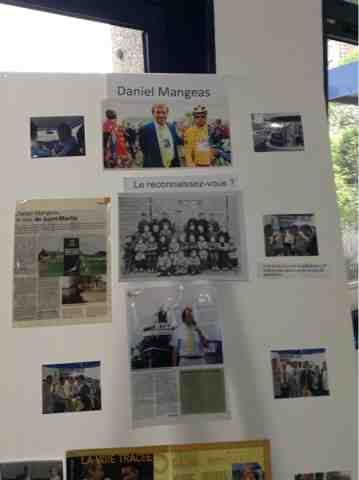 The artist who goes around to Ville Ètapes painting bike art on shop windows had left his mark. 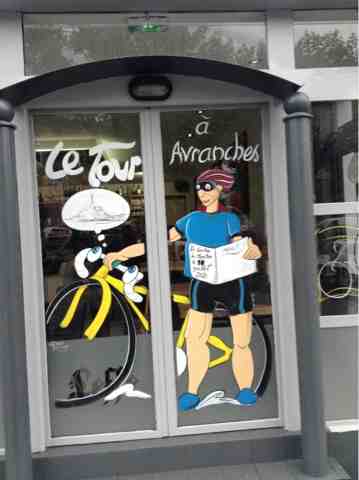 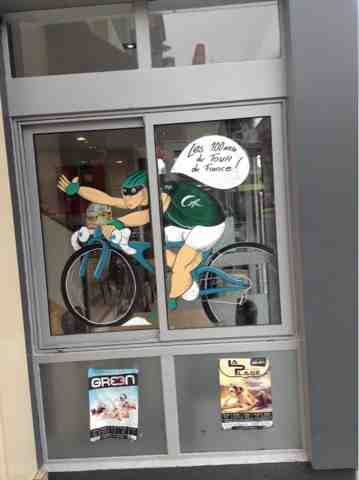 Perhaps Avranches' most original feature was yellow, green and red polka dot jerseys painted on the cycle figures designating bike lanes, something that every Ville Ètape ought to do.  Each brought a smile to my face as I biked around the town. Like the bike wheels in Fougères, they were a simple, but a fine tribute. 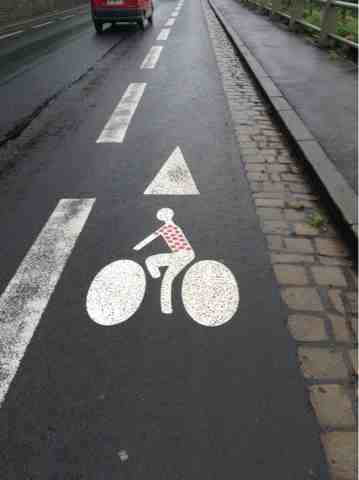 There was also a magnificent cluster of green-painted bikes forming a tree in front of the city's cathedral. 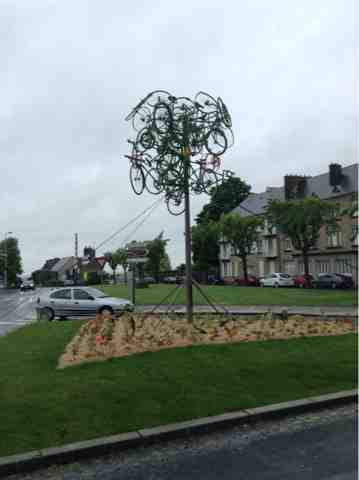 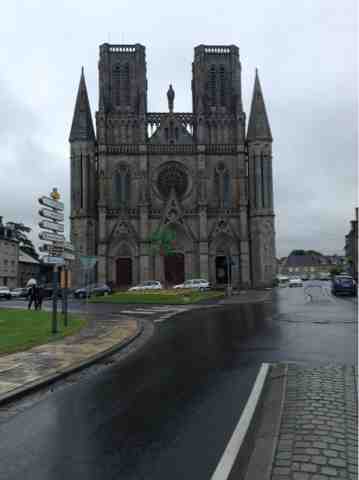 It may have been another typical misty, rainy day in Brittany, but it didn't detract in the least from my excitement at seeing the many manifestations of bike-love in Avranches, nor make me regret in the least that I hadn't chosen to plunge to escape Brittany's inclement weather.  After several days of it, I hardly noticed the wet.  It was negligible enough that the road was still dry under trees, though it had me dripping.

Mont-Saint-Michel will only be visible to the racers the last few miles of their ride, that is if they dare take their eyes off the road ahead.  Luckily I had that luxury and privilege.  This was my third time biking past this monumental shrine, France's most visited site after the Eiffel Tower, but it still took my breath away.  I stopped at a picnic area for some paté, even though there were no electrical outlets, to prolong my time in its majestic presence. 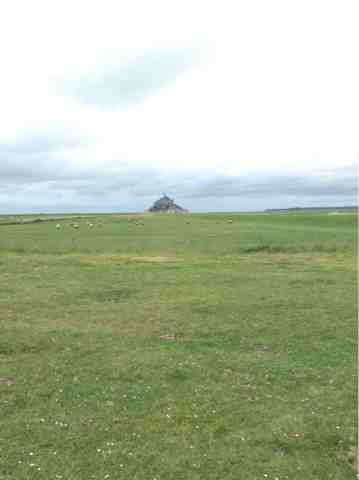 While I ate and gazed I was joined by a 50-year old German on a recumbent.  He immediately launched into a spiel as if I were the first non-French speaker he'd encountered in days--"I've come 1,500 kilometers from Hamburg but this rainy weather is too much.  The forecast is for days more, so rather than going all the way to Brest I am going to take a train to Nantes where the weather is supposed to be better."  As he ranted on and on I figured this had to be his first touring experience.  No, he'd biked around  Poland three summers ago.  "Remember how hot it was that summer?" he asked.  "It was worse than this rain." Then he asked, "Are you Dutch?"

When I told him a little about my travels, he asked if I had written a book.  He said if I were German, I would have written many.  I've biked with a handful of Germans over the years, though all were a generation younger than he, and none had his braggadocio.  He had the same demeanor as the 60-year old German cyclist Andrew, Craig and I encountered more than a week ago, perhaps a new species of cycle tourist or perhaps a symptom of older Germans. It will certainly make me wary of older German cyclists.

Andrew left me the stove he bought when he arrived in France, as it requires fuel canisters that are unavailable in Australia.  So for the first time last night I cooked up a meal in France, some bacon that Andrew also left me and some eggs.  I was camped in a small forest surrounded by farm land, so I had no worries of the frying bacon attracting wild boars.  It was a fine meal, but delayed my eating, which I am always eager to start in on after I set up my tent.  I'll have to decide whether it is worth the effort or the added weight. 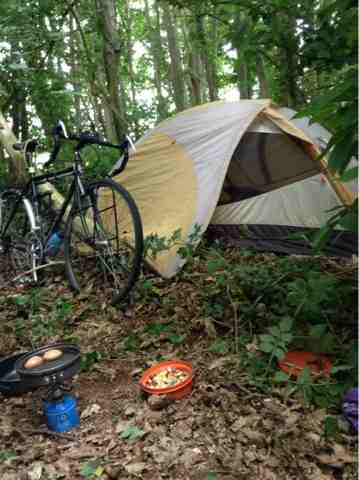 Posted by george christensen at 1:28 PM

Glad the rain isn't bringing down your spirits! Great eye spotting these works of art--esp. the King of the Mtns jersey!

George, it was you who convinced me that touring with a stove was unnecessary, when we toured together in Cuba. I have not carried a stove in 12 years. Also, it is now impossible to carry alcohol or fuel on planes for the stove. And it is a hassle keeping the utensils clean. If I want hot food, I can eat at some of the local food stands.

Dwight: I am not committed to cooking, just taking advantage of Andrew's left-over fuel and his micro-stove. It weighs next to nothing.