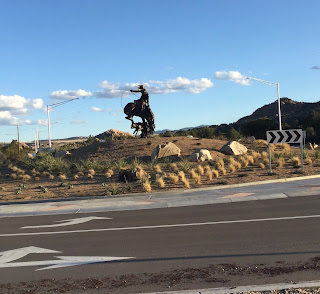 As I cycled out of Prescott I was given another opportunity to get in some practice for my return to France in a little more than a month when I came upon a roundabout.  There have been a few in these travels, maybe two or three a week, and all fairly new.  Each has been at a relatively busy intersection proving their great utility allowing traffic to slip through without having to come to a halt or of being regulated by stoplights or stop signs.  The non-stop flow of traffic resembles a well-orchestrated dance.

Prescott’s roundabout was very French, decorated with a sculpture linked to a museum of Western Art at the intersection.  My taste buds know France is imminent as they are beginning to express a craving for menthe á l’eau, that zesty emerald green drink that will be my beverage of choice for three months.  My taste buds never tire of the minty brew that will be featured in my prime water bottle. 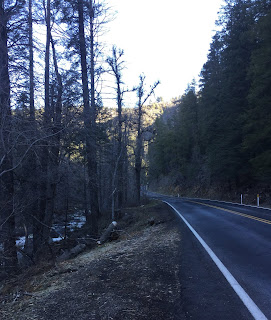 I knew I had a final climb to 7,000 feet to Flagstaff ninety-five miles away, but I didn’t know I had an extra climb that high less than halfway there just before the still rustic Western town of Jerome, now a tourist attraction.  It was a startling way to start my day after camping in some trees outside of Prescott.  I was so famished when I descended to Jerome at 5,000 feet a little after eleven that I went in search of my first stack of hot cakes in these travels.

The first diner I came to that didn’t have the pretensions of a tourist-trap had just stopped serving breakfast, but a server directed me to a restaurant down a side street that served breakfast all day.  It was packed and had only one empty table.  Luckily it had a nearby electrical outlet, otherwise I couldn’t have stayed, as my iPad needed charging and I knew there were no open libraries ahead on this stretch, so had to find an eatery where I could charge. 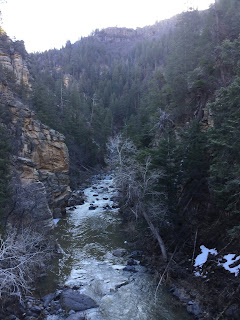 From Jerome the descent continued for over a thousand feet to a valley floor, followed by a climb to Sedona, a fully Disneyfied tourist town.  It had become an alpine ski village.  The city itself went on for four miles, everything on both sides of the four-lane highway that bisected it prettified as if made over by a team of Ralph Lauren designers.  Even the McDonald’s yellow M had been made turquoise.

And then beyond for miles and miles through Oak Creek Canyon the way was dotted by mini-trophy homes and hotels that called themselves spas and retreats and yoga centers.  It was a full-fledged desecration of the once pristine canyon.  The scenery was still spectacular, and as I climbed the 2,500 feet up to Flagstaff, twenty-five miles away, I was glad all the more that I hadn’t taken the train home from Phoenix or Tucson, and had extended these travels a couple hundred miles.

I camped seven miles up the canyon.  It was thirty-six degrees when I resumed riding and it got colder, down to freezing, as I climbed.  Signs warned of ice on the road.  It was a genuine hazard.  It wasn’t until I escaped the tight canyon after another nine miles when the road departed from the creek and steepened considerably that I reached the sun and could warm up and not worry about ice.  Near the summit an overlook was lined with permanent concrete tables for Native Americans to sell their wares.  There was a lot of turquoise. 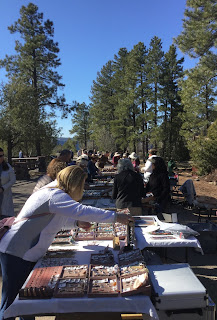 Turquoise is such a predominant presence in Arizona that the lone neckerchief I found along its roads was of that color, still knotted, blown off the head of someone on a motorcycle.  It was a welcome contrast to California. California is as blue as a state can be what with a Democrat governor, two Democrat Senators, both women, and 46 of its 53 Representatives Democrats, but as far as neckerchiefs it was a red state for me. All I came up with along the road were red, five of them, all in the northern part of the state.  In the south there were none, just terry-cloth wash cloths of many hues, some sort of commentary on the difference of the two halves of the state.

My final few miles into Flagstaff were on historic Route 66, my third acquaintance with it on this trip, the first in Chicago on the way to the train station at its inception and then in Santa Monica where it ends.  Flagstaff had stenciled emblems of 66 on its stretch and a large mural paid it tribute.

I was hoping to pass a campground on the way into Flagstaff so I could have a shower before my thirty-three hour train trip departing at four a.m., but the only campground was a barebones county facility without such an amenity.  That meant I’d have to keep my baseball cap on for the entirety of the trip.  I went directly to the train station in the center of town adjoining the tourist office to confirm I didn’t need a box for my bike, but it was unattended until three p.m., as it serviced just two trains a day, one arriving at eight p.m. heading west and the other eight hours later heading east.
That gave me a few hours to explore town, checking out a couple of resale shops and an Army surplus store in search of a larger duffle than what Tim had provided me.  The surplus store had one for $99, too much, and the resale shops had none.  I’d just have to make do with what I had.  The Goodwill store had a huge inventory of goods, all in large bins, that was sold by the pound—$1.39 for clothes and accessories.  There were quite a few people sifting through the jumble. I didn’t have the patience, but I did find a pair of shorts and a JanSport dayback, the two weighing in at a little over a pound. 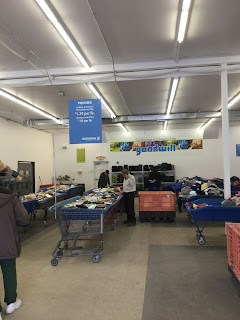 After a respite at the library I returned to the train station.  The ill-tempered attendant confirmed that my bike could be hung in the baggage car, but with nothing on it, and that the Southwest Chief, departing out of LA, had generally been running on time, at least into Flagstaff.  But he gave the bad news that the train station closed after the arrival of the eight p.m. train and didn’t reopen until two a.m.  Rather than a motel, I gladly opted for the hostel, just two blocks away.  So I got a shower after all.  Then I had the dilemma of sleeping and trusting the alarm on my iPad to wake me or staying up.  I tried to sleep, but after an hour gave up and returned to reading the 2014 Pulitzer-winning “The Goldfinch” on my iPad, which I’d been nibbling away at the entire trip.  I would have liked to have taken a day off and finished it, but always had a destination to reach that couldn’t wait.  There wasn’t any bicycling to speak of until near the end when the wide-ranging plot climaxes in Amsterdam. 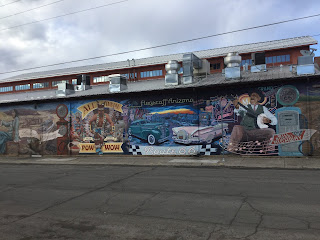 I was filled with the satisfaction of another good trip and also the eagerness for some normalcy with Janina.  Returning via train wouldn’t be the same as flying home, as I customarily do—the last two winters from Africa and the previous five from the Arab Emirates, Taiwan, Turkey, Beijing and the Philippines, quite a string of faraway places.  I would actually be longer in transit covering just 1,500 miles.  There wouldn’t be anyone serving me meals or movies to watch on the screen on the seat in front of me, but it would be a prolonged sit allowing my body its first rest in weeks. And all the while I would be looking forward to my bike ride home, less hectic from the train station than the airport, though of the same distance—seventeen miles.  And I know while I’m riding I’ll be anticipating the next adventure while savoring the one just completed.  It may not have been terribly exotic, but it still answered all my cravings for a good bike ride.
Posted by george christensen at 4:00 AM

Howdy George!
Remembering the early 70’s in the rural Verde valley & living on a commune around the ghost town of Jerome as being so fine & beautifully peaceful. Call some place paradise kiss it goodbye!
Thoroughly enjoy your essays & accounts of your travels & Carnegie libraries. Safe travels brother

Great trip George. I enjoyed reading along. I was however a bit shocked at the constant mention of homeless people. What has happened to the US?