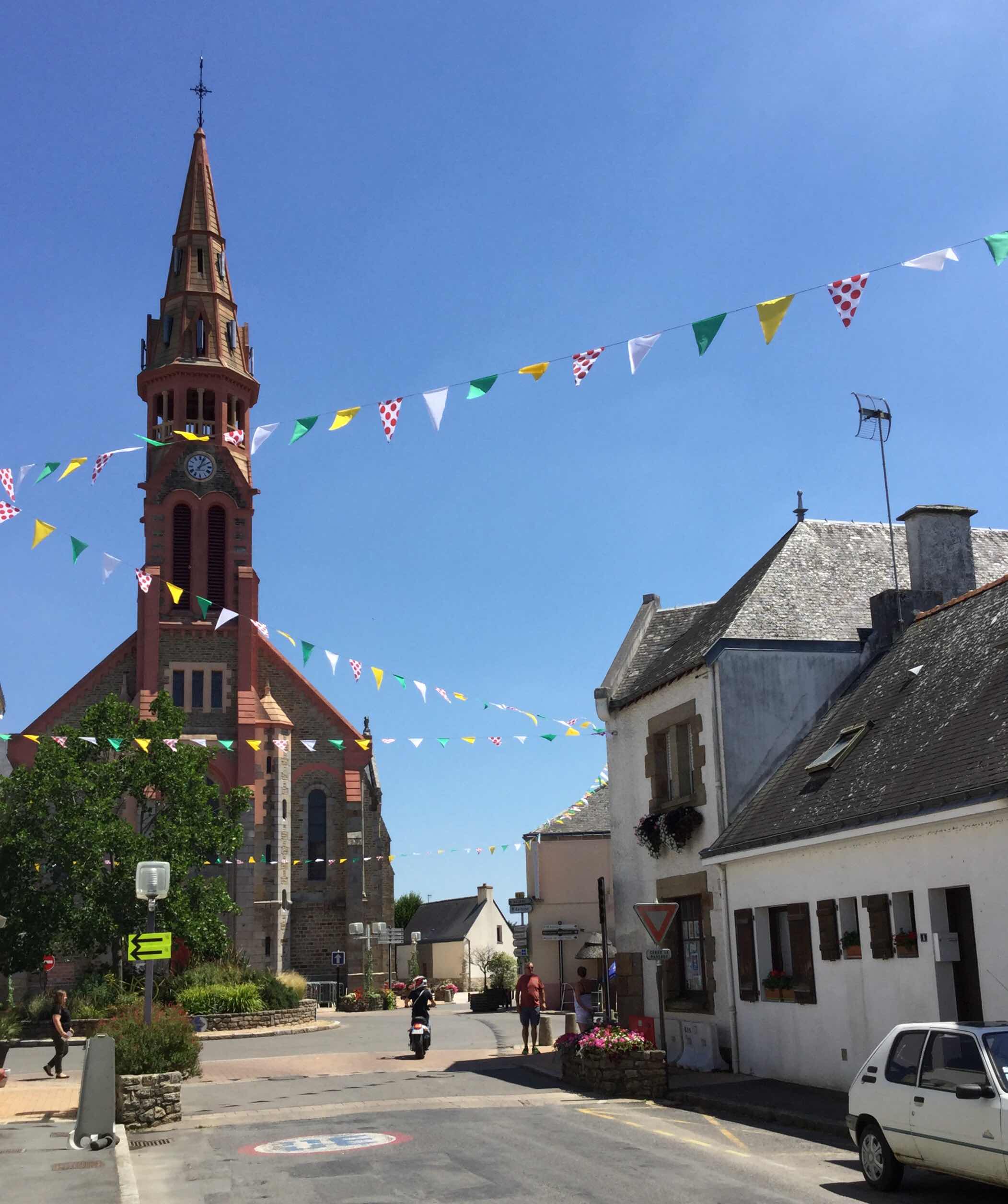 As much as I delight in pyramids of bikes and craftily arranged bike wheels and the countless variations on reimagining the bike and all the other decorations along The Tour route, none gladdens my heart more than those black-arrow-on-day-glow yellow course markers.  They are the true reminder that I’m riding The Tour de France. I may see one every few minutes, but their power to please never wanes. They are pure joy. All is well in my world as they guide me for miles and miles.  They are especially welcome when I return to them after an unmarked transfer from one stage to another.
So it was this afternoon in La Baule, Ville Départ for Stage Four, after over eighty miles of riding off course, including the mile climb to the summit of the huge bridge over the Loire.  I made the climb early in the morning this time, unlike a month ago, so the winds hadn't picked up too much, but it was still a nerve-wracking effort holding steady in the narrow bike lane with all the vehicles speeding past unable to fulfill Skippy’s demand of a meter-and-a-half clearance.  I felt a duty to all cyclists to remain steady, as a bike fatality on the bridge could make it off-limits for all cyclists.  They’d have to go miles out of their way to Nantes for another bridge across the mighty river.
I struggled to find my way out of La Baule when I scouted out the route last month without the course markers, so it was doubly sweet to be fully guided this time through the center of this resort town on the Atlantic, then a mile along its wide beach and past the casino before turning inland.   I was a full 24 hours ahead of the peloton.  Only a handful of Tour followers had skipped the day’s team time trial in Cholet and jumped ahead as I had to station themselves along the route.   Small towns had crews out sweeping the road and dropping off barriers and bails of hay and making other preparations for their great day in the spotlight.
A few people in the town of Marlais were putting the finishing touches on their elaborate welcome to The Tour. 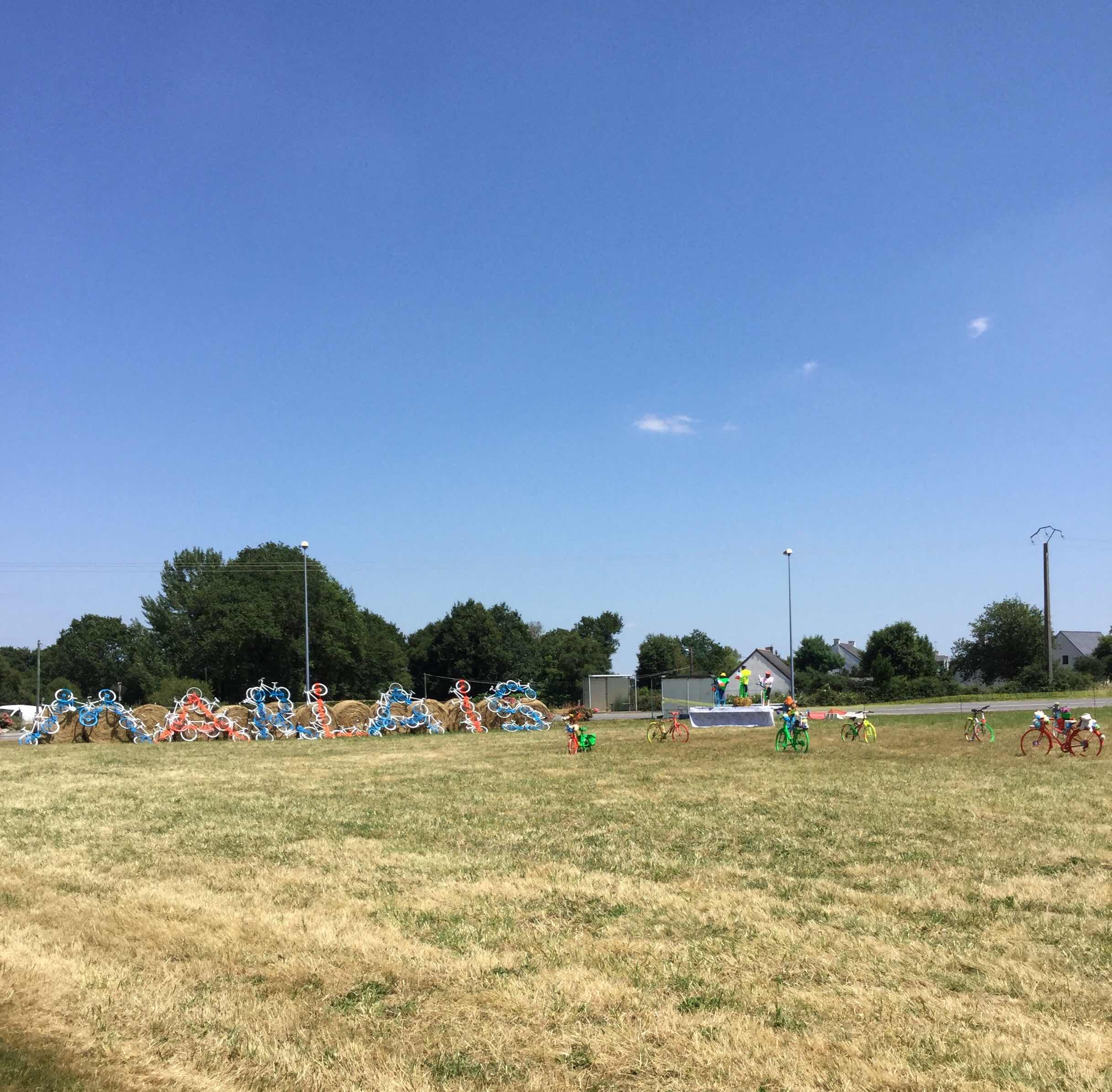 Along with spelling out their town’s name in bikes the field around it was inhabited by a legion of painted bikes and wheel creatures. 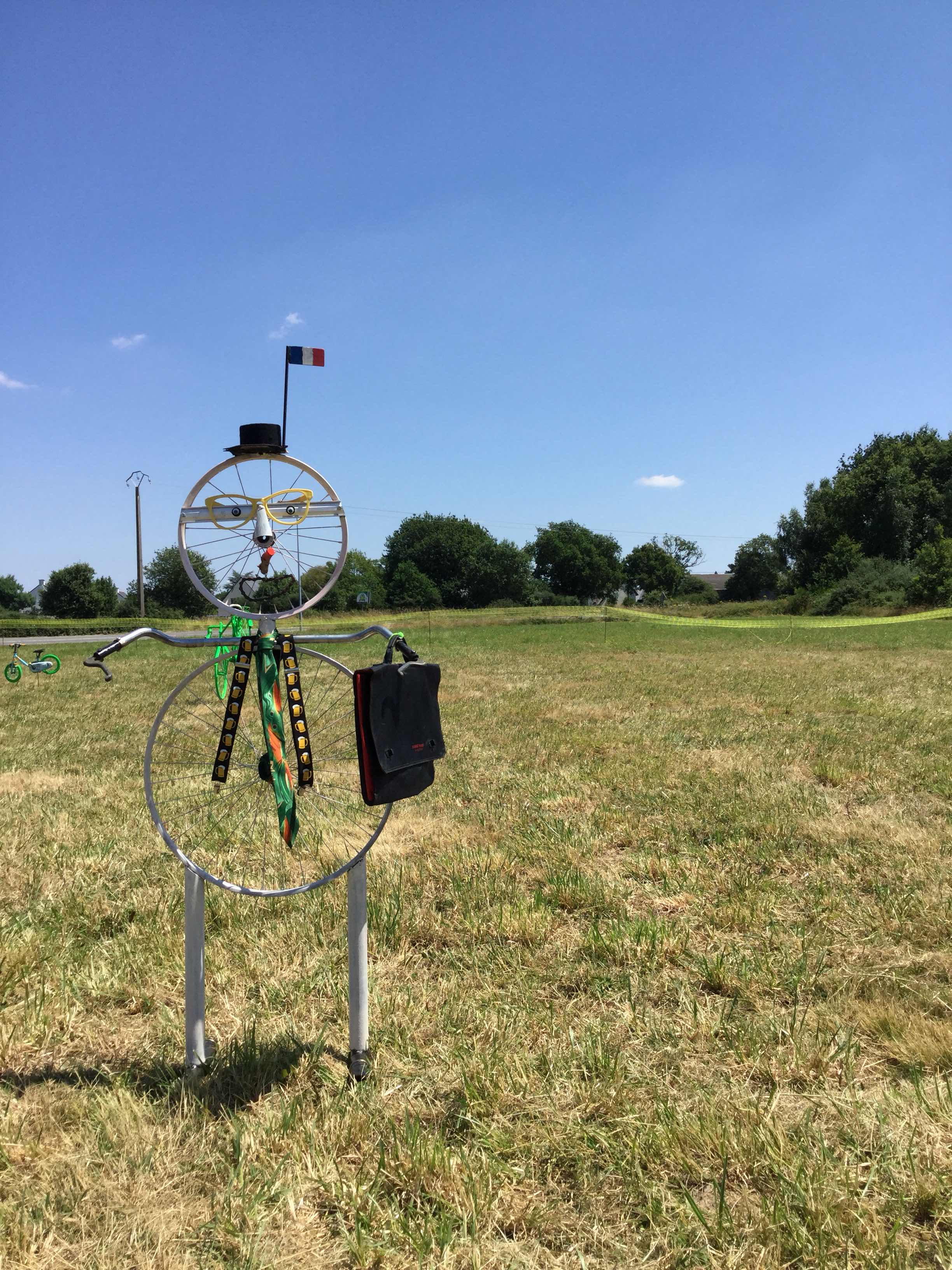 I could leisurely pedal enjoying a fine day on the lightly traveled secondary roads The Tour specializes in as I was in no rush other than to find a bar around  4:30 to watch the final hour of the day’s team time trial.  If I had checked to see what order the teams would be riding going off every five minutes in reverse order of their standing in The Race, I might have stopped sooner as the two strongest time trialing teams, BMC and Sky, were near the bottom of the standings thanks to the crash on Stage One and would be among the first on the road. They had already made their sub-forty minute rides around the twenty-two mike course and had the best times, BMC four seconds better than Sky.  Quick Step, the second to last team to hit the course, made it a little nervous for the BMC team, who all had to sit tightly packed still wearing their uniforms in an enclosure with the camera on them as the team-in-waiting for the stage win.
When Quick Step crossed the line seven seconds slower than BMC they all rose to their feet and hugged one another.  The camera stayed on Belgian Greg Van Avermaet as he was the highest placed of their riders and would be in Yellow the next day.  His American teammate Tejay Van Garderen was tied with him on time, but had finished behind him in the bunches on the first two stages.  He is now second overall and Sky’s Geraint Thomas third, three seconds back.  Van Avermaet could hold on to the coveted Jersey for the next six stages through the cobbles of Roubaix before relinquishing it in the Alps.  Maybe it will help BMC land the new sponsor it needs to continue as a team.  It’s team leader, Richie Porte, has already announced he will abandon ship after the season to Trek, not confident the team will remain afloat.
Thomas would have loved to have been in Yellow if Sky had just been four seconds faster, but his team is no doubt happy they didn’t gain the Jersey and have to expend energy defending it through the demanding next six stages in Brittany and across the north of France.  The top five teams for the day all finished within twelve seconds of one another, with Sun Web finishing fifth, anchored by time trial world champion Tom Dumoulin, who finished second to Froome at the Giro and is among the contenders here.  The Movistar trio of Valverde, Landa and Quintana lost 54 seconds, Nibali one minute and six seconds and Bardet one minutes and fifteen seconds, not as disastrous as it could have been for any of them. The other overall contender, Adam Yates, only lost nine seconds, as his Mitchell-Scott team had a strong showing with a fourth place finish.
Uran on Education First fared decently too, losing only 35 seconds, as the former Garmin team, which once won the time trial at The Tour, finished sixth.  Uran is well positioned in tenth overall, hoping to improve on his surprise second place last year.  Education First was on the course early too so I missed Lawson Craddock trying to hang on with his fractured shoulder.  He did commendably well, even taking some turns at the front before fading away with six miles to go.
Sagan made no effort to defend the Yellow Jersey he was wearing, actually dropping off his team pace line two-thirds of the way around the course, likely saving energy for the stages to come.. The team’s time is taken after the fourth rider crosses.  Several of the teams were reduced to four riders with the other four dropping back unable to keep up or after a huge effort.  Even with four it is a beautiful site watching the riders work together and trying to remain as aerodynamic as possible.
There was no drinking from water bottles to be seen.  The heat has diminished a tad, at least for me going north into Brittany.  Still I’m soaking my shirt and dousing my head whenever the opportunity offers itself.  I was glad to have a fifth water bottle last night as I drained my other four.  I was glad also to have picked up a pack of powdered sports drink with sodium and electrolytes as I needed it last night when I shifted in my tent and began cramping.  I was trying to finish off my mint syrup before starting in on the sports drink.  Now I know enough to alternate it with the menthe á l’eau.  It was rainy my entire time in Brittany two weeks ago, it’s customary weather.  A visitor to the region once asked a boy if it always rained there.  He said, “I don’t know.  I’m only eight years old.”

Posted by george christensen at 4:40 AM