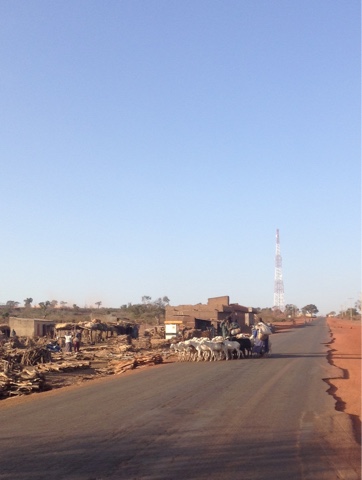 As I retrace my ride across Mali back to Senegal I am able to anticipate the few rough stretches of pot holes and don't have to fret wondering how long they will last.  But my memory has failed me in their duration.  They seemed to go on indefinitely on my first encounter, but on a second time they pass in a snap.  One horrendous stretch after Didieni I thought lasted ten or twelve miles.  It was actually only three.

Instead of suffering through them on my return I can be entertained by a theater of the absurd routine by squadrons of young boys and girls who stand beside the potholes waiting for a vehicle to approach.  They then gather up some dirt in their makeshift plastic scoops and toss it into one of the potholes, as if they are a voluntary road maintenance crew and deserve a tip.  Not once have I seen them rewarded, though they must on occasion for so many of them to persist at it.  There are dozens of these somewhat dignified beggars along the stretchs of potholes.  If they were truly at work on the potholes, they could fill each in a few minutes.  Instead they wait until a vehicle comes along and then make as if they are performing a service.  It's not unique to Mali, as I witnessed such a charade last year in Madasgascar.

There's not much else for such people to do in the semi-desert terrain of the Sahal, especially during the dry season, if they don't have a herd of goats to tend to or they're not in the business of gathering wood.  Most are scraping by at the subsistence level and have few options in this arid world of theirs. What wood they gather turns up in stacks along the road and is picked up by trucks and transported to urban areas, as wood is the prime fuel for cooking throughout the country. 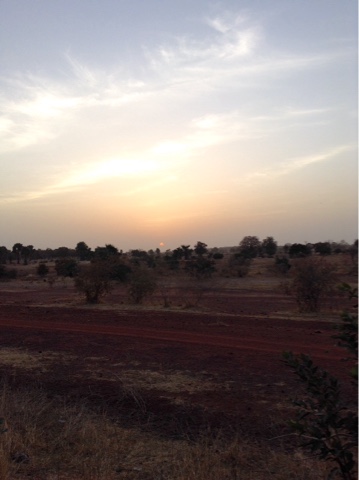 A few trees do survive in this terrain.  They provide shade for my rests.  I am surprised at times to see passersby, not having seen anyone for miles  and miles.  But they are certainly more surprised to see a white-bearded white man beside a bike hunched under a tree.  I could well be an alien who has dropped from the sky by their reaction, staring at me in bewilderment. 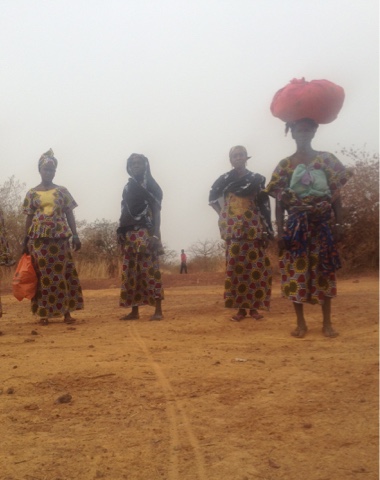 Kids in particular are unabashed in their staring.  If I'm jotting on my iPad I can tilt it up and snap a photo without them realizing what I doing. Though there are those who ask for a "cadeau," a gift, it is not as pervasive as in Sengal where they are more accustomed to encountering whites.  The people have been remarkably cordial and respectful.  Twice a bill has slipped from my pocket and dropped to the ground when I have reached in for some coins to pay for something and someone has pointed it out.  They could have easily waited for me to leave and had a minor windfall of a dollar or two.

It is nice to be pedaling without any urgency, as I was to Bruce and Sounkalo, as I knew I was going to be pressed for time to get what visas I needed and then continue on another seven hundred miles to DL in Liberia and then another twelve hundred miles back to Dakar through four more countries I'd have to get visas for. Flying might have been an option to avoid all those border crossings, but getting my bike on a plane could have been a nightmare of a different order.  I had five weeks before my return to complete it all, which I wasn't sure was enough.  My ordeal at the Ivory  Coast embassy altered that plan and spared me from many more battles with African bureaucracy.  Now I can ride without the weight of all those concerns.  I'm riding leisurely, but even so had my first one hundred mile day of this trip.

I wasn't intent on a century, as I had been looking for a spot to camp for several miles as dark closed in.  Though it often  seems that no one could be living in the vicinity, I will spot a mud hut blending in with the terrain, or catch site of someone trudging along either on foot or on a donkey or occasionally on a bike, so I must press on.  I have to wait as close to dark as I can when people will have concluded their commute or won't so easily spot me.  It is a nervous time for me.  Twice after I have stopped to camp someone has passed close to me but without noticing me in the dim light and my camouflage.

At the 98-mile mark I spotted some bushes in the distance that I could camp behind.  As I pedaled through the dirt to reach them I saw some horses grazing nearby.  I didn't notice anyone tending them, but I didn't care to take the risk, so returned to the road.  It was another two miles, just as I hit 100 miles for the day, that I saw another bush far enough from the road for me.

I've come 200 miles from Bamako and have another 220 miles to Kayes, where I will have my first opportunity for a shower in a hotel.  I'll at least be able to douse myself at the only gas station I encountered on this route that had running water tomorrow in Diema, one of the highlights of my ride to Bamako.

At least I won't be desperate to find wifi, as a friend of Sounkalo's provided me with a SIM card for my iPad.  I didn't have the consciousness to do that as soon as I arrived in Senegal, partially because I had no clue how difficult it would be to find wifi.  Now I have access to the Internet wherever I might be.  I almost feel guilty to be so connected to the world.  So far there have been no blank spots even out in this lightly inhabited region where few villages even have electricity.

Posted by george christensen at 12:38 AM

Yes, the worst is to have your campsite discovered right after sunset, after you have set it up. It happened to me in Myanmar, and a few guys returned, calling to me, I guess. I think they had found a place for me to stay in the nearby town, but I was not willing to reveal myself and repack in the darkness. I did not sleep well that night, startled at any noise.

George isn't it customary to offer a little bribe to officials in Africa, is it against your principles.